Hybrid Sponge-Like Scaffolds Based on Ulvan and Gelatin: Design, Characterization and Evaluation of Their Potential Use in Bone Tissue Engineering
Next Article in Special Issue

Feasibility Study on the Use of Recycled Polymers for Malathion Adsorption: Isotherms and Kinetic Modeling
Previous Article in Journal

The surface configuration of tetravalent manganese feroxyhyte (TMFx) was appropriately modified to achieve higher negative surface charge density and, hence, to improve its efficiency for the removal of dissolved Cd and Pb mostly cationic species from water at pH values commonly found in surface or ground waters. This was succeeded by the favorable engagement of Ca2+ cations onto the surface of a mixed Mn-Fe oxy-hydroxide adsorbent during the preparation step, imitating an ion-exchange mechanism between H+ and Ca2+; therefore, the number of available negatively-charged adsorption sites was increased. Particularly, the calcium coverage can increase the deprotonated surface oxygen atoms, which can act as adsorption centers, as well as maintain them during the subsequent drying procedure. The developed Ca-modified adsorbent (denoted as TMFx-Ca) showed around 10% increase of negative surface charge density, reaching 2.0 mmol [H+]/g and enabling higher adsorption capacities for both Cd and Pb aquatic species, as was proved also by carrying out specific rapid small-scale column tests, and it complied with the corresponding strict drinking water regulation limits. The adsorption capacity values were found 6.8 μg·Cd/mg and 35.0 μg·Pb/mg, when the restructured TMFx-Ca adsorbent was used, i.e., higher than those recorded for the unmodified material. View Full-Text
Keywords: Cadmium; lead; adsorption; ion exchange; manganese feroxyhyte; surface modified adsorbent Cadmium; lead; adsorption; ion exchange; manganese feroxyhyte; surface modified adsorbent
►▼ Show Figures 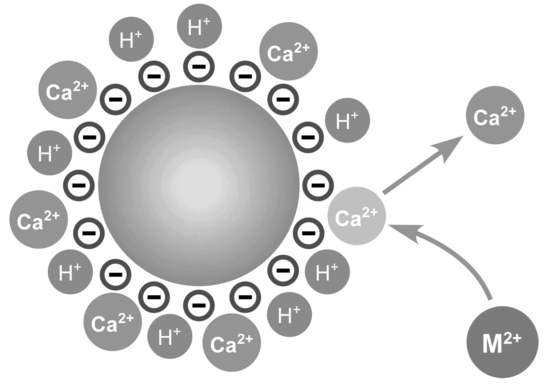