Polyamide 66 (PA66)/poly (2,6-dimethyl-1,4-phenylene ether) (PPE) blends with a ratio of 50/50 (w/w) were produced by a twin-screw compounder. The immiscible blends were compatibilized using two different styrene–maleic anhydride copolymers (SMA) with a low (SMAlow) and a high (SMAhigh) maleic anhydride (MA) concentration of 8 and 25 wt%, respectively. Furthermore, the SMA content was varied from 0 to 10 wt%. The influence of MA concentration and SMA content on the morphological and thermomechanical properties of PA66/PPE blends was investigated. Herein, we established correlations between the interfacial activity of the SMA with blend morphology and corresponding tensile properties. A droplet-sea to co-continuous morphology transition was shown by scanning electron microscopy to occur between 1.25 and 5 wt% in the case of SMAhigh. For SMAlow, the transition started from 7.5 wt% and was still ongoing at 10 wt%. It was found that SMAlow with 10 wt% content enhanced the tensile strength (10%) and elongation at break (70%) of PA66/PPE blends. This improvement can be explained by the strong interfacial interaction of SMAlow within the blend system, which features the formation of nanoemulsion morphology, as shown by transmission electron microscopy. Very small interdomain distances hinder matrix deformations, which forces debonding and cohesive failure of the PPE phase as a “weaker” main deformation mechanism. Due to a lack of interfacial activity, the mechanical properties of the blends with SMAhigh were not improved. View Full-Text
Keywords: blend; compatibilization; SMA; PA66; PPE; melt blending; morphology; tensile blend; compatibilization; SMA; PA66; PPE; melt blending; morphology; tensile
►▼ Show Figures 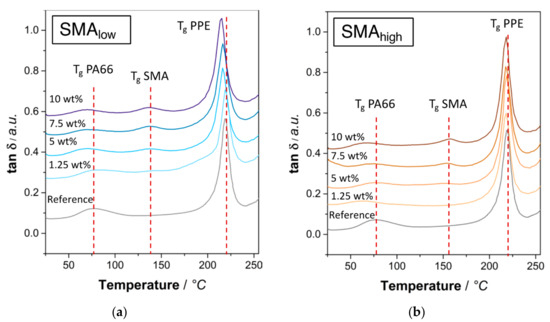