Under some circumstances, composites with a corrugated reinforcement geometry show larger necking strains compared to traditional straight reinforced composites. In this work, finite element modeling studies were performed for linearly hardening materials, examining the effect of material parameters on the stress–strain response of both corrugation and straight-reinforced composites. These studies showed that improvements in necking strain depend on the ability of the corrugation to unbend and to provide a boost in work hardening at the right time. It was found that there is a range of matrix yield strengths and hardening rates for which a corrugated geometry will improve the necking strain and also a lower threshold of reinforcement yield strength below which no improvement in necking strain is possible. In addition, benefit maps and surfaces were generated that show which regions of property space benefit through corrugation and the corresponding improvement in necking strain that can be achieved.
Keywords: composite materials; architectured materials; corrugated reinforcements; finite element modeling (FEM); mechanical properties composite materials; architectured materials; corrugated reinforcements; finite element modeling (FEM); mechanical properties

Many forming processes are limited by the maximum uniform deformation or the necking strain. The necking strain of a material can be increased by introducing a wavy or corrugated reinforcement. There have been a number of studies that investigate the effect of a corrugated geometry on the behavior of isolated corrugations [1,2,3,4,5,6], sandwich panels with a corrugated core [7,8,9], and composites materials with corrugated reinforcements [3,4,10,11,12,13,14,15,16,17,18,19,20,21,22]. Dayyani et al. [1] and Thill et al. [2] both explored the behavior of isolated trapezoidal corrugated structures, whereas Bouaziz [3], Boke [4], Ge [5], and Fraser et al. [6] studied and modeled the behavior of isolated sinusoidal corrugated structures. Luo et al. [7] and Gilchrist et al. [8] studied the bending of corrugated board sandwich panels, and Yokozeki et al. [9] examined sandwich panel structures with corrugated cores for the application of morphing wings in aviation. In general, these studies have shown that when loaded in tension along the longitudinal direction, the corrugated structure shows a lower initial stiffness and lower strength level, followed by a hardening process as a result of the unbending of the corrugation. In some of the studies [3,4,6,13,21,23] where the deformation was taken to high levels of strain, this unbending process was shown to lead to a material that necks at a higher level of strain compared to an uncorrugated counterpart and yet still has a comparable ultimate tensile strength. This ability to improve necking strain, without sacrificing strength, can lead to promising combinations of properties, particularly for energy absorption applications.
With regard to the composite materials with a corrugated reinforcement geometry, it is of interest to determine under what conditions the use of a corrugated geometry improves the necking strain of the composite. The effect of material properties has been explored for corrugated composites in elastic systems by Chiskis and Parnes [12], Chou and Takahashi [13], and Khatam and Pindera [16]. Abdelrahman and Nayfeh [14] used analytical micromechanical modeling to predict the stress distribution within a corrugated fiber reinforcement in an elastic matrix, providing valuable information on the local stress state in the composite material, although the model was limited to elastic materials and did not provide results on the global stress–strain behavior of the composite. Finally, Shi et al. [21] investigated the effect of the rate sensitivity of elastic–viscoplastic corrugated reinforcements on the necking strain of the composites. Therefore, there is a gap in the knowledge regarding the effect of the material properties of both the matrix and reinforcement phases for corrugation-reinforced composites with plastically deforming materials.
Fraser et al. [24] utilized FEM simulations to compare the unbending behavior of an isolated corrugation to that of a corrugation embedded in a matrix material, exploring how the unbending behavior was impacted by the matrix material and the geometry of the corrugation. Another investigation [25] illustrated how corrugation-reinforced composites can be used to fill a hole in the material property space characterized by high strength and high necking strain. The purpose of this paper is to further explore the effect of the plastic material properties of the matrix and reinforcement components on the necking strain of these materials and ultimately establish guidelines for determining composite systems that will benefit from corrugated reinforcement architecture. This was accomplished by performing parametric studies on the linear hardening properties of the component materials using finite element modeling (FEM) simulations.

For each combination of matrix and reinforcement properties, two simulations were performed; the first had a single straight reinforcement, and the second had a single corrugated reinforcement, as shown in Figure 1. Regardless of the geometry, each sample had a composite length, L, of 40 mm, composite height, hc, of 5 mm and reinforcing volume fraction of 20%. The corrugation geometry itself can be described as a wave with a corrugation height, h, period, P, and thickness, t, as labeled in Figure 1. The base case that was considered for the different material systems had a corrugation height of 3 mm, period of 8 mm, and thickness of 0.78 mm. This is contrasted with the straight reinforced composite in which the reinforcement had a thickness of 1 mm. The FEM simulations were performed using two-dimensional plane strain models in ABAQUS.
The boundary conditions were defined so as to simulate tensile loading in the longitudinal direction and consisted of horizontally fixing the left end of the sample and displacing the right end of the sample by a finite amount in the horizontal direction. Additionally, the midpoints of both ends were fixed vertically to prevent the simulated part from drifting in the vertical direction. As the simulations were two-dimensional, they used first-order plane strain quadrilateral elements, CPE4. Following mesh refinement studies, the element size was selected such that the number of elements within the simulation was between 20,000 and 25,000.
Both the matrix and reinforcement materials were defined such that they showed elastic–linearly plastic behavior and thus follow the expression, σ = YS + Kε, where YS is the yield strength and K is the linear hardening rate. Linear hardening behavior was selected, as this allowed for simpler isolation of the effects yield strength and work hardening compared to the commonly employed power-law hardening. The mechanical properties of the matrix were set similar to copper with an elastic modulus of 115 GPa, a Poisson’s ratio of 0.33, yield stress in the range of 50 to 400 MPa, and hardening rates in the range of 200–1000 MPa [26,27]. The reinforcement had mechanical properties similar to those of a ferrite/pearlite steel with an elastic modulus of 207 GPa, Poisson’s ratio of 0.3, yield stress in the range of 300–1200 MPa, and hardening rates in the range of 1000–4000 MPa [26,28]. The interface between the matrix and reinforcement phases was idealized and was modeled assuming a perfect interface that would not separate. Although not realistic, this simplification was employed to limit the number of confounding variables and to isolate the effect of the material properties of the matrix and reinforcement. Future studies should be completed exploring the effect of the interfacial strength on the behavior of these composites.
Four parametric studies were performed to examine the effect of the yield strength and linear hardening rate for both components. Each study focused on a single parameter, varying that parameter across a range of values while fixing all the other material parameters. The values of these parameters for each of the studies are summarized in Table 1. The range of values selected for each parameter in each parametric study were established by first selecting an arbitrary initial parameter value, running the set of simulations with that value and then evaluating the results of those simulations. Then, subsequent sets of simulations were completed at increasingly higher values of the parameter, with each set of simulations evaluated after completion. Once it was established that the trend in behavior had leveled out and subsequent increases in the parameter would yield similar results, the highest parameter value was set as an upper bound. A similar process was completed by running subsequent sets of simulations at parameter values below the initial value until a lower bound was determined.

This work was supported by the Natural Science and Engineering Research Council of Canada (NSERC) [grant number RGPIN3978-15].

This work was supported by the Natural Science and Engineering Research Council of Canada (NSERC). M.F. would like to acknowledge the financial support of NSERC and the Government of Ontario. The authors would like to thank and acknowledge J. D. Embury (McMaster), and Y. Brechet (INPG) for the valuable discussions on this topic. 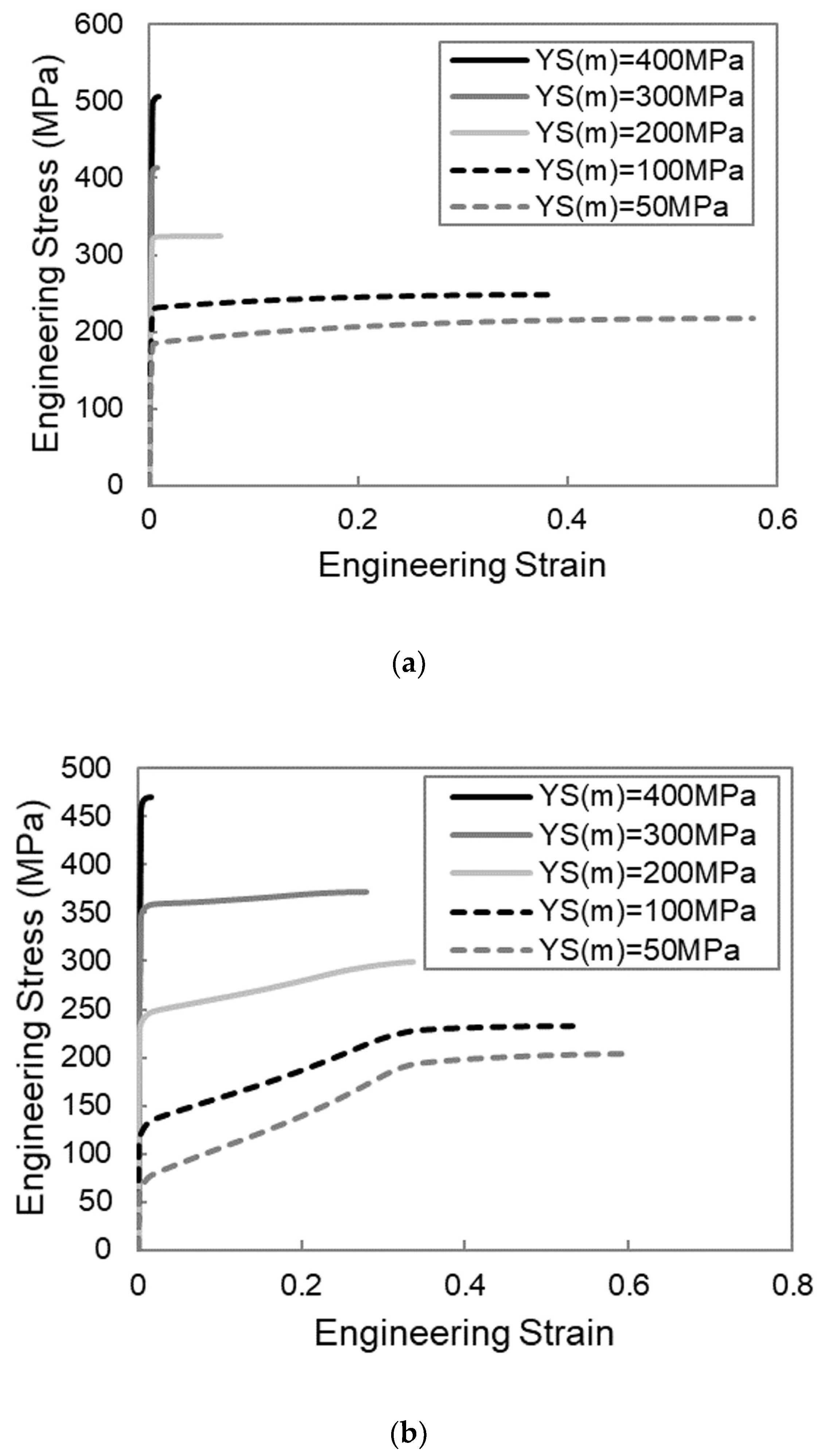 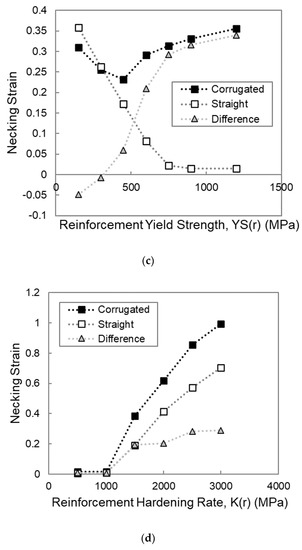 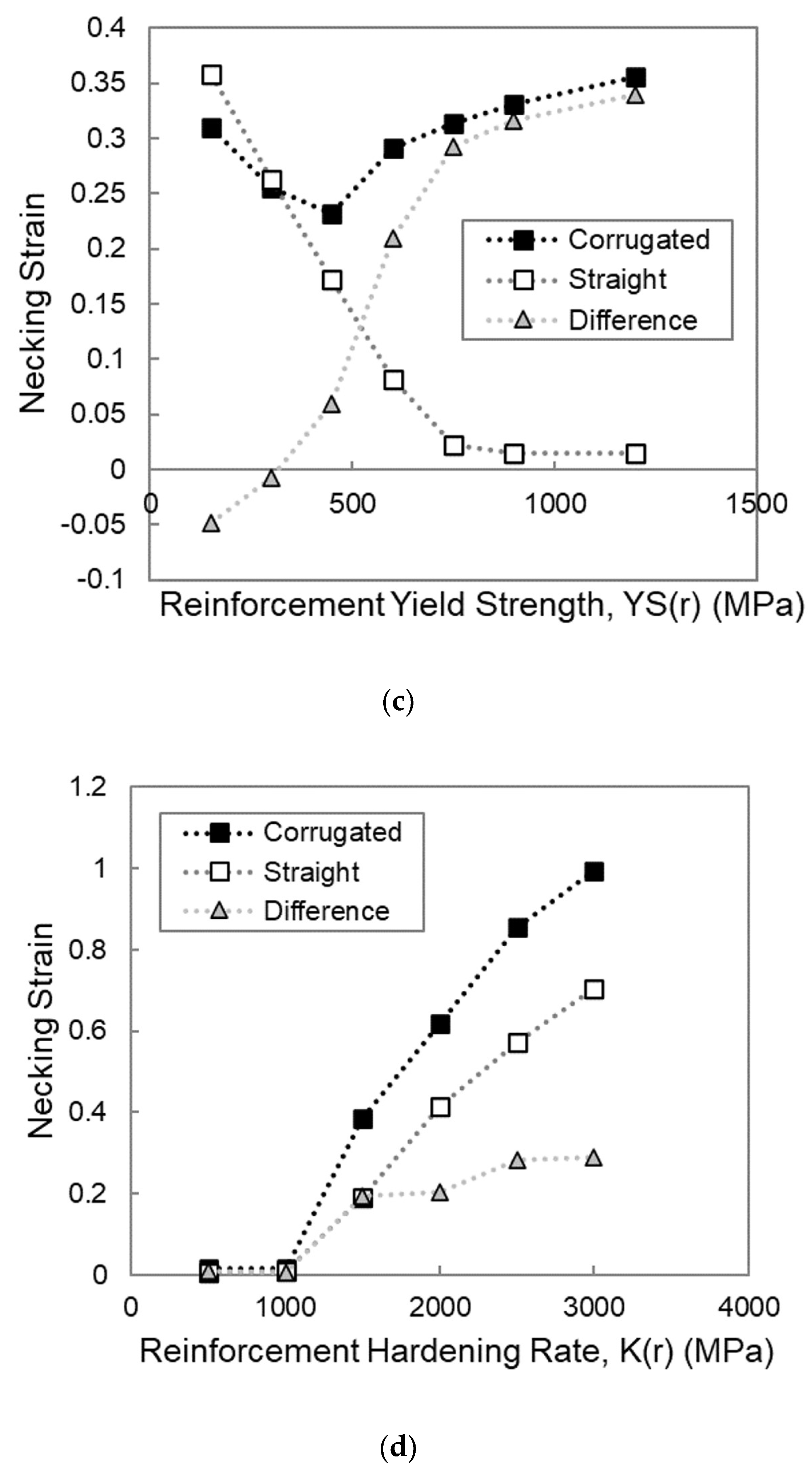 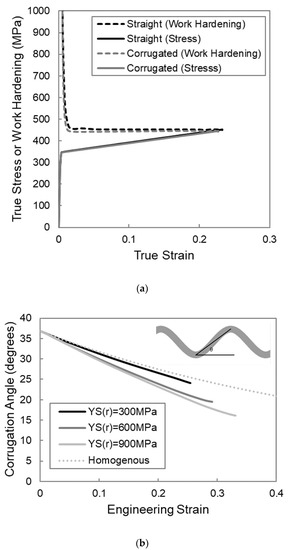 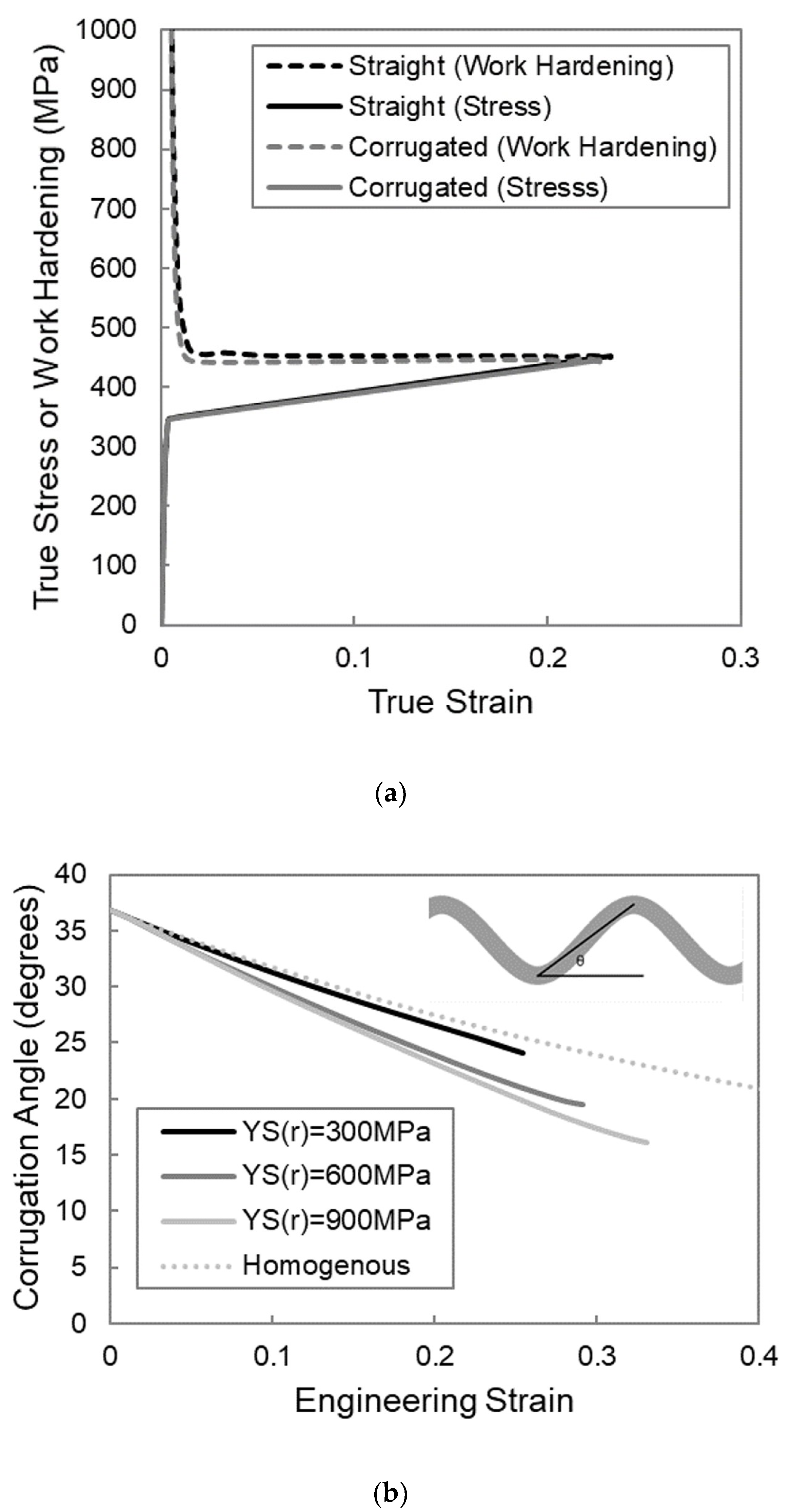 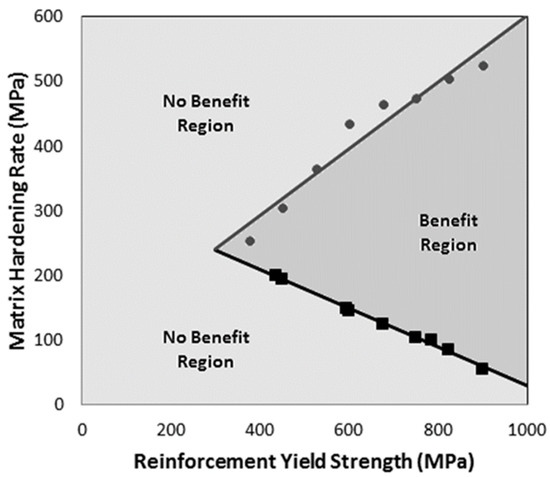 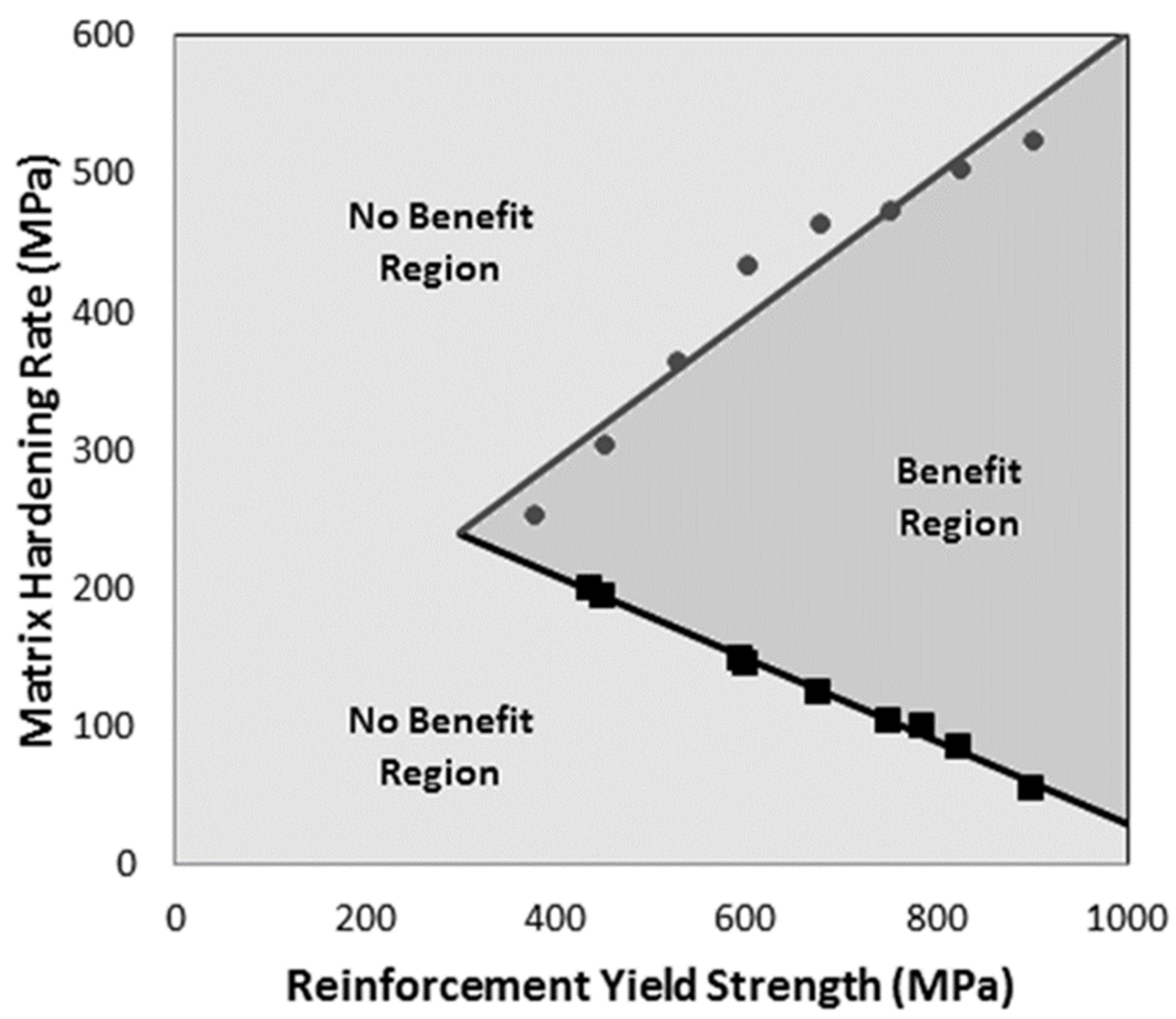