Alloying and Processing Effects on the Microstructure, Mechanical Properties, and Degradation Behavior of Extruded Magnesium Alloys Containing Calcium, Cerium, or Silver
Next Article in Special Issue

The goal of this study was to evaluate the effects of two implant bed preparation techniques on the implant primary stability (IPS) and the bone density of the implant site. We completed 40 implant bed osteotomies in pig ribs using two techniques: osseodensification (OD) plus under-drilling (UD) with universal osseodensification drills (Test A), and under-drilling alone with drills of the same implant system (Test B). Implants with a 4.1 mm diameter and 10 mm length were inserted, and the IPS was evaluated with three methods: (insertion torque (IT), periotest (PTV), and resonance frequency analysis (RFA). The bone density was evaluated using micro-computed tomography. ANOVA and Tukey’s post-hoc test were used for comparison of the IPS values, and Kruskal–Wallis was used to evaluate the bone density. Statistical significance was set at p < 0.05. The tested B technique (UD) achieved a higher IPS compared to the Test A technique (OD + UD) for all the evaluation methods (p < 0.05). Bone density was higher at the apical and middle region in Test A compared to Test B and control sites (p < 0.05). We concluded that although the bone density increased with the hybrid OD technique with universal drills, implant beds prepared with UD using drills with geometry similar to that of the implant are more efficient at increasing IPS values. View Full-Text
Keywords: osseodensification; under-drilling; primary stability; bone density osseodensification; under-drilling; primary stability; bone density
►▼ Show Figures 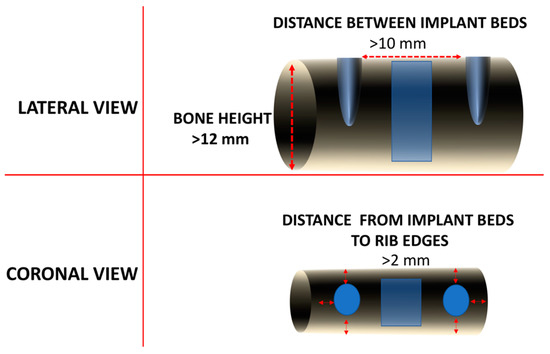