2.1. Syntheses of the ZnO Nanoparticles

ZnONP colloidal solution was synthesized via a process of pulsed laser ablation of pure ZnO target (purity > 99.99%, GoodFellow, Huntingdon, UK) immersed in a glass beaker containing 25 mL of Milliq. water. The depth of water above the ZnO target was 2.5 cm. The experimental set-up is the same as we used in [27], with Nd:YAG laser (Quantel, Brilliant, Les Ulis, France) parameters as follows: number of pulses 10,000, wavelength 1064 nm, repetition rate 5 Hz, pulse energy 300 mJ (120 mJ delivered to the target), pulse duration 5 ns, fluence 79 J/cm2. Mass concentration of ablated ZnO material in as-synthesized colloid (in a form of nanoparticles and irregular material) was calculated from ablated crater-volume and known ZnO density. The crater volume was determined using an optical microscope (Leica DM2700M, Leica Microsystems, Wetzlar, Germany). As-synthesized colloidal solution is diluted in proper ratios to get solutions with 30%, 10% and 3% of initial ZnONP mass concentration. pH value of as prepared ZnONP colloidal solution is 7.3 ± 0.3. (after 30 min of UV irradiation it drops down to 6.9 ± 0.3).

For structural characterization films of ZnO prepared by dropping of colloidal solution onto Si substrate until a visible film was formed. The shape, size and morphology of the as-synthesized ZnO nanoparticles or other ZnO structures which are present in synthesized solution were assessed by scanning electron microscope (SEM, JSM-7600F, Jeol Ltd., Tokyo, Japan), operating at 10 kV and utilizing Everhart-Thornley low-energy secondary electron detector. The fine structures were further analyzed by dual-beam scanning-electron microscope and focused ion beam (SEM-FIB, Helios NanoLab 650, FEI B.V., Eindhoven, The Netherlands), operating at 15 kV and additionally equipped with energy-dispersive X-ray spectrometer (X-max SDD, Oxford Instruments plc, Abingdon, UK).
ZnO film was structurally examined with GIXRD (grazing incidence X-ray diffraction) technique. The GIXRD measurements were carried out on a diffractometer equipped with a Co X-ray tube and a W/C multilayer for beam shaping and monochromatization (D5000, Siemens, Munich, Germany). The diffracted spectra were collected with a curved position sensitive detector (RADICON) in the angular range 2θ = 33°–88°. In all measurements, a fixed grazing incidence angle of αi = 1.5° was used.
The X-ray photoelectron spectroscopy (XPS) analyses were carried out on the PHI-TFA XPS spectrometer (Physical Electronics Inc., Chanhassen, MN, USA). The analyzed area was 0.4 mm in diameter and the analyzed depth was about 3–5 nm. Sample surfaces were excited by X-ray radiation from monochromatic Al source at photon energy of 1486.6 eV. The high-energy resolution spectra were acquired with energy analyzer operating at resolution of about 0.6 eV and pass energy of 29 eV. During data processing the spectra from the surface were aligned by setting the C 1s peak at 284.8 eV, characteristic for C–C/C–H bonds. The accuracy of binding energies was about ±0.3 eV. Quantification of surface composition was performed from XPS peak intensities taking into account relative sensitivity factors provided by instrument manufacturer [34]. Two different XPS measurements were performed on each sample and average composition was calculated.

A Hg UV lamp (homemade, UVA irradiation 285 mW/cm2, UVB irradiation 200 mV/cm2, UVC 8 mV/cm2) was used for irradiation of cuvettes which contain colloidal ZnONPs and organic dye (Methylene Blue or Rhodamine B) whose photodegradation rate was measured. Photoabsorbance measurements were made before irradiation and in steps of 10 min of irradiation in order to analyze gradual decrease of photoabsorption curve caused by photocatalytic degradation of dye using UV-Vis spectrophotometer (Lambda 25, Perkin Elmer, Waltham, MA, USA). Initial dye concentration was varied simply by adding different volumes of dye in non-irradiated ZnONP colloidal solution. At every ZnO catalyst mass concentration photocatalytic degradation rate for three different initial dye concentrations was measured—which in pure Milliq water have absorbance maxima A0 = 2, A0 = 1 and A0 = 0.5. MB has absorbance maximum at λ = 664 nm with corresponding extinction coefficient about 75,000 cm−1/M and RB has absorbance maximum at λ = 553 nm with corresponding extinction coefficient about 100,000 cm−1/M. Initial dye concentrations, calculated using Beer-Lambert law, were about 2.7 × 10−5 mol/L for MB, and about 2 × 10−5 mol/L for RB, both for A0 = 2.

The mass concentration of ZnO in as-synthesized colloidal solution is calculated according to a procedure described in [30].Volume of a crater remaining on the ZnO target after ablation (or volume of ablated material) was determined from crater semi-profile shown in Figure 1. with a procedure described in [35]. In short, the crater has a Gaussian shape profile and it was determined by using an optical microscope taking images at different focal positions with respect to the target surface. From such images crater radii at certain depths were determined (whose values are shown in Figure 1).
Total crater volume is obtained as a sum of frustums formed by consecutive radii at corresponding depths. Crater volume is 5.61 × 107 μm3, which multiplied with ZnO density () gives the total mass of ZnO in as-synthesized colloidal solution. Finally, ZnO mass concentration in as-synthesized ZnO solution is calculated by dividing with volume of Milliq water in vessel where target was immersed and laser-irradiated:
ZnO as-prepared solution is further diluted with Milliq water to get diluted ZnO colloidal solutions () to study dependence of photocatalytic degradation of MB and RB on different ZnO colloidal mass concentrations (including the pure dye cases).

Secondary electron (SE) SEM micrographs are shown in Figure 2. In Figure 2a it can be seen that, beside well-defined nanoparticles, different irregular structures are formed during ablation. The largest part of analyzed sample area looks like that shown in Figure 2b, with prevailing spherical nanoparticles as dominant nanostructures. From SEM images a size-distribution of nanoparticles is determined and shown in Figure 3. Size-distribution can be fitted as log-normal with distribution maximum at diameter . Formation of certain amount of irregular structures upon laser synthesis of ZnONP make us unavailable to calculate precisely number concentrations of ZnONP but only mass concentration of all formed structures (equals to a mass of ablated materials). Further in text we refer to ZnONP but taking into account that also other structures participate in photodegradation reactions at certain level which we cannot distinguish.
Energy-dispersive X-ray spectroscopy (EDS) analysis revealed that ratio between zinc and oxygen atoms number is 52:48 as it can be seen from Figure S1. It points out that ZnO is dominant material formed in laser ablation while no significant impurities or other elements were found by this technique.
A detailed SE-SEM observation of surface morphology of ablated ZnO spherical nanostructures (Figure 4a) revealed structured surface. In Figure 4b large nanosheets can be seen, which contain many spherical nanoparticles trapped or adhered on their surface.

The crystallinity of ZnONPs was examined by GIXRD measurements. The GIXRD spectrum, together with the reference patterns for the ZnO phase (JCPDS-ICDD card #36-1451), is shown in Figure 5 and it reveals that ZnONP are crystalline. Experimental GIXRD spectra show only the peaks characteristic for the hexagonal wurtzite phase of ZnO crystallites. In addition, the presence of all main ZnO diffraction peaks in the experimental curves indicate randomly oriented crystallites within the film (no preferential orientation).
High energy resolution spectra Zn 2p3/2 and O 1s are shown in Figure 6a,b, respectively. Zn 2p3/2 peak was fitted with one component peak at 1021.5 eV which corresponds to Zn2+ states in the ZnO lattice. The O 1s spectrum was fitted with two components. The peak at 531.6 eV (87% of relative intensity) may be assigned partially to chemisorbed OH or C–O groups and partially to oxygen deficient regions within the matrix of ZnO and therefore with concentration of oxygen vacancies [36]. OH or C–O groups probably originating from surface contamination during sample preparation under atmospheric conditions as it can be concluded from XPS depth profiles shown in Figure S2 (C and O features are only present at sample surface). The contamination was also observed form XPS survey spectrum shown in Figure S3. Peak at 530.3 eV (13% of relative intensity) was assigned to O2− oxide structure in ZnO lattice.

In order to calculate bandgap of as-synthesized colloidal ZnONP a Tauc plot was made from UV-Vis data as shown in Figure 7. A Tauc plot for was used direct bandgap calculation () because ZnO is known as direct-bandgap semiconductor (shown in the inset in Figure 7). The direct-bandgap from the Tauc plot is 3.30 eV, which is very close to well-known value of the ZnO bandgap (3.37 eV). Larger bandgap deviations would point to changes and deformations in the optical and crystal properties in the ZnO material that could have a high impact on the physical and photocatalytic properties of colloidal solutions.

We acknowledge Krešimir Salamon for XRD and Janez Kovač for XPS analysis. 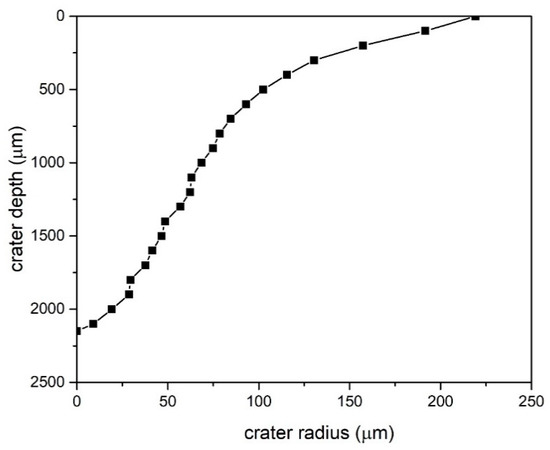 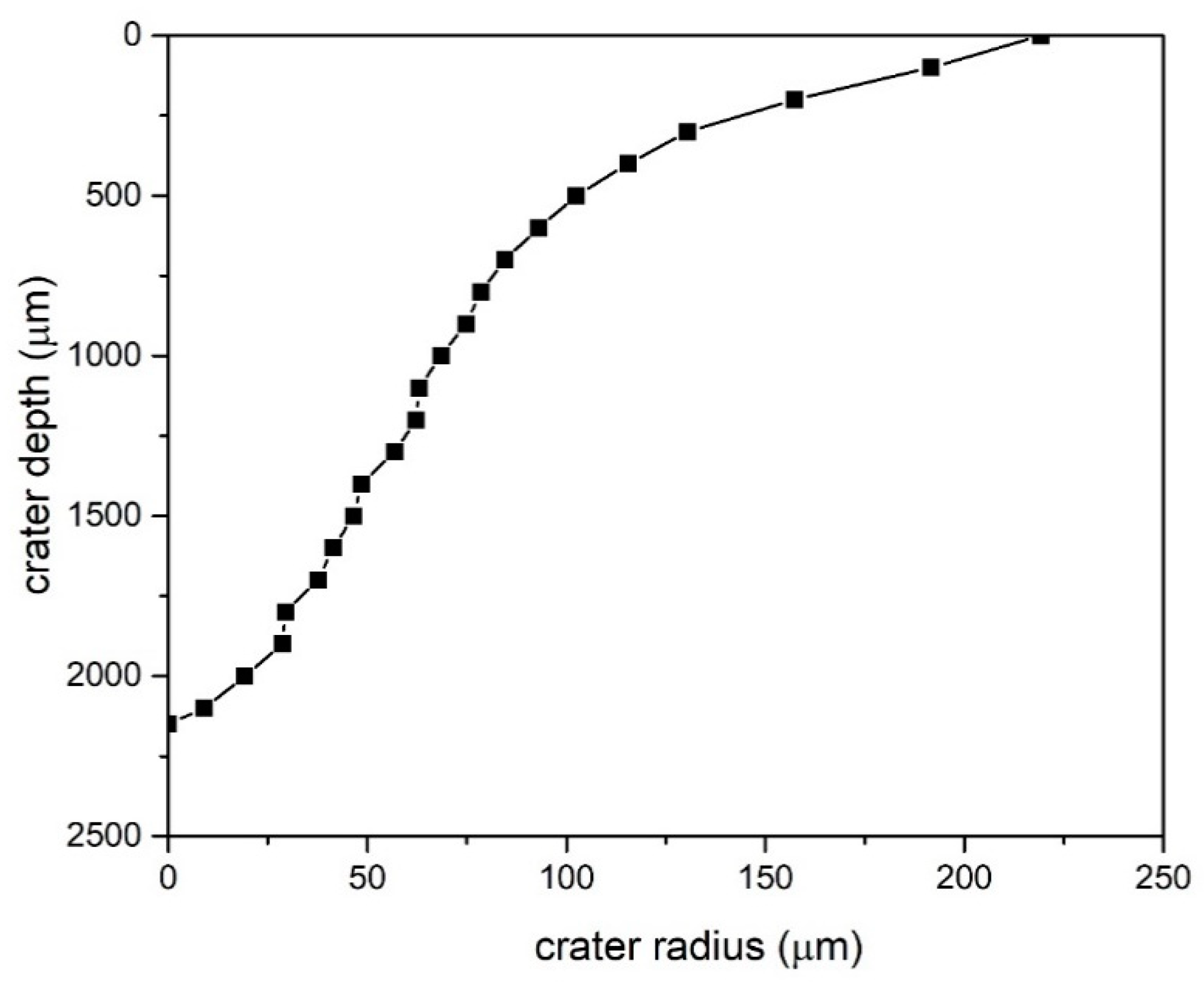 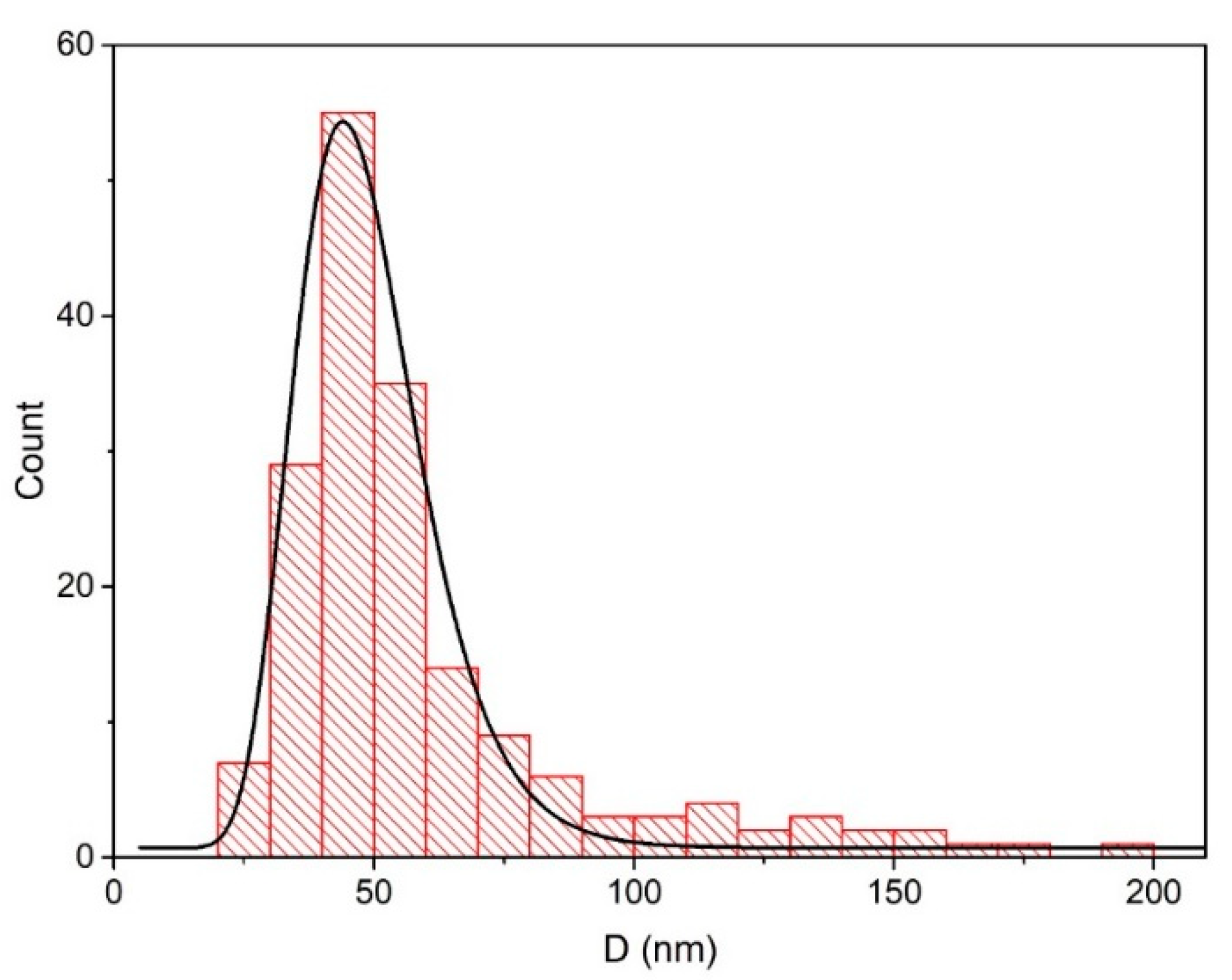 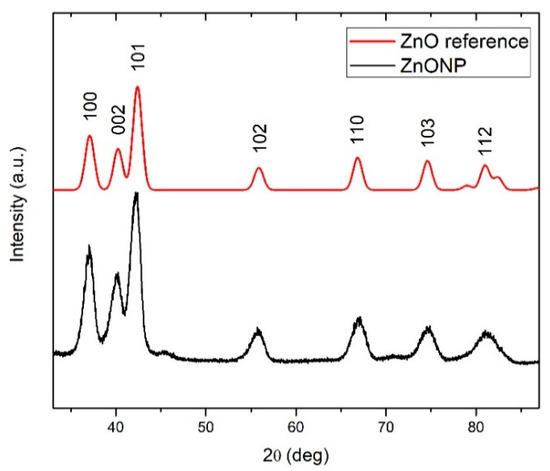 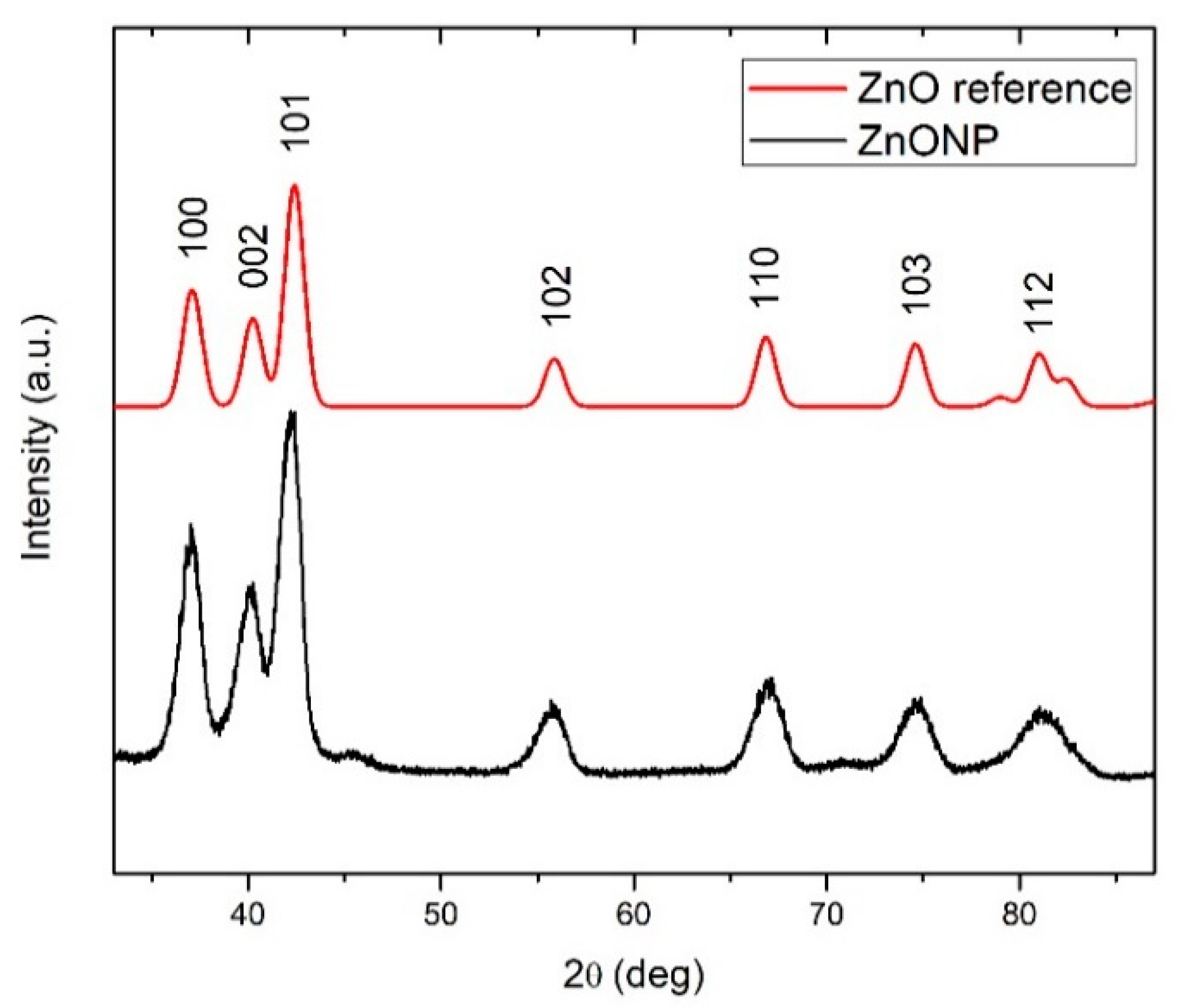 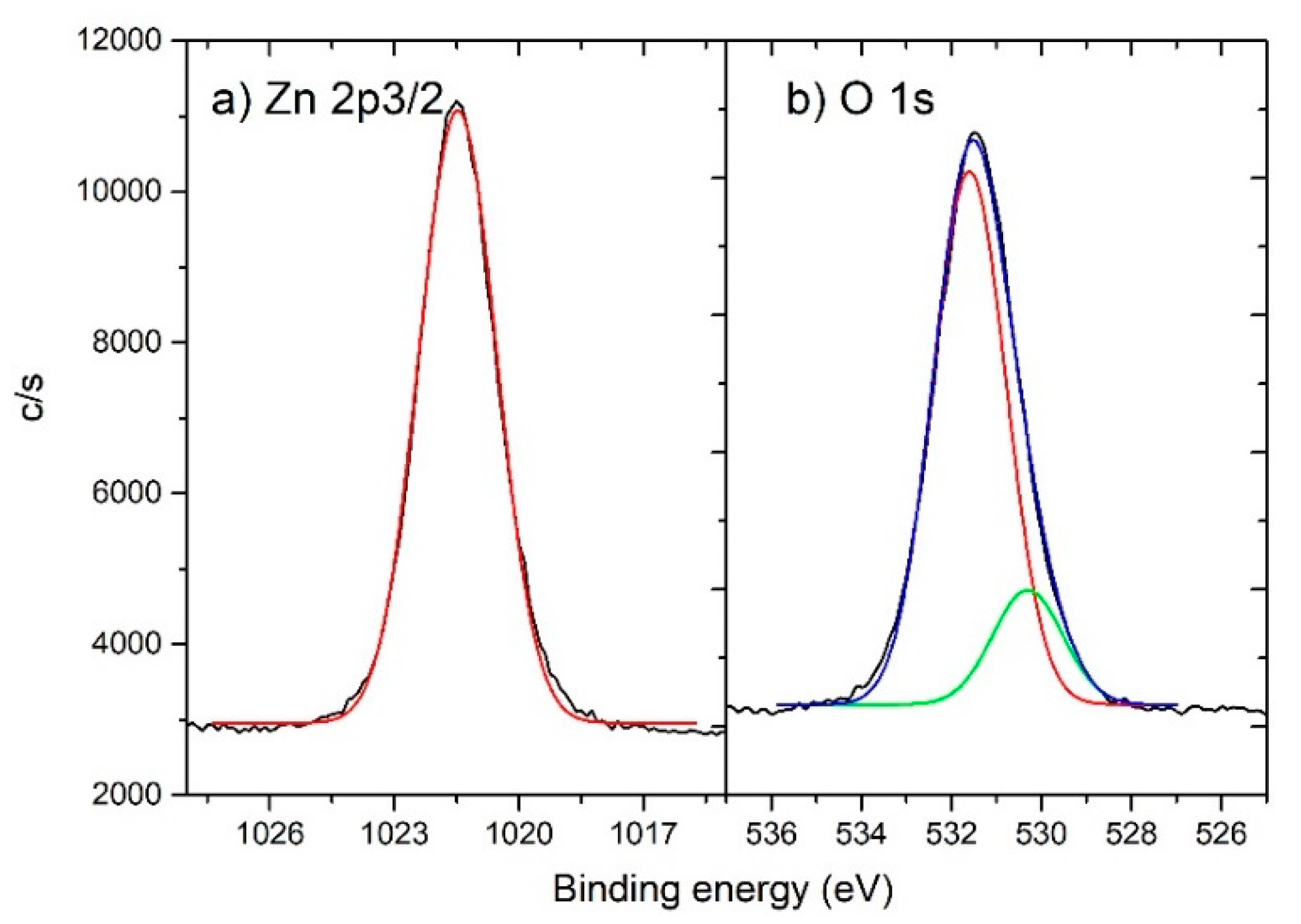 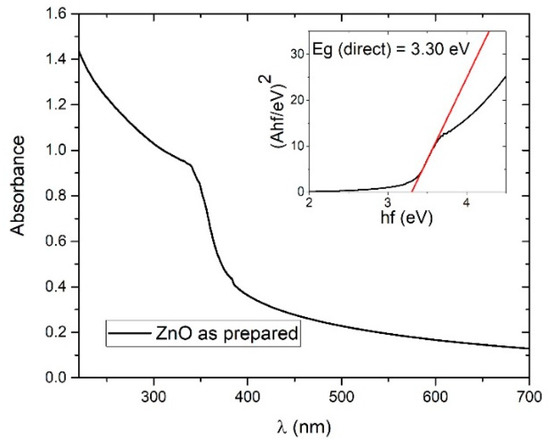 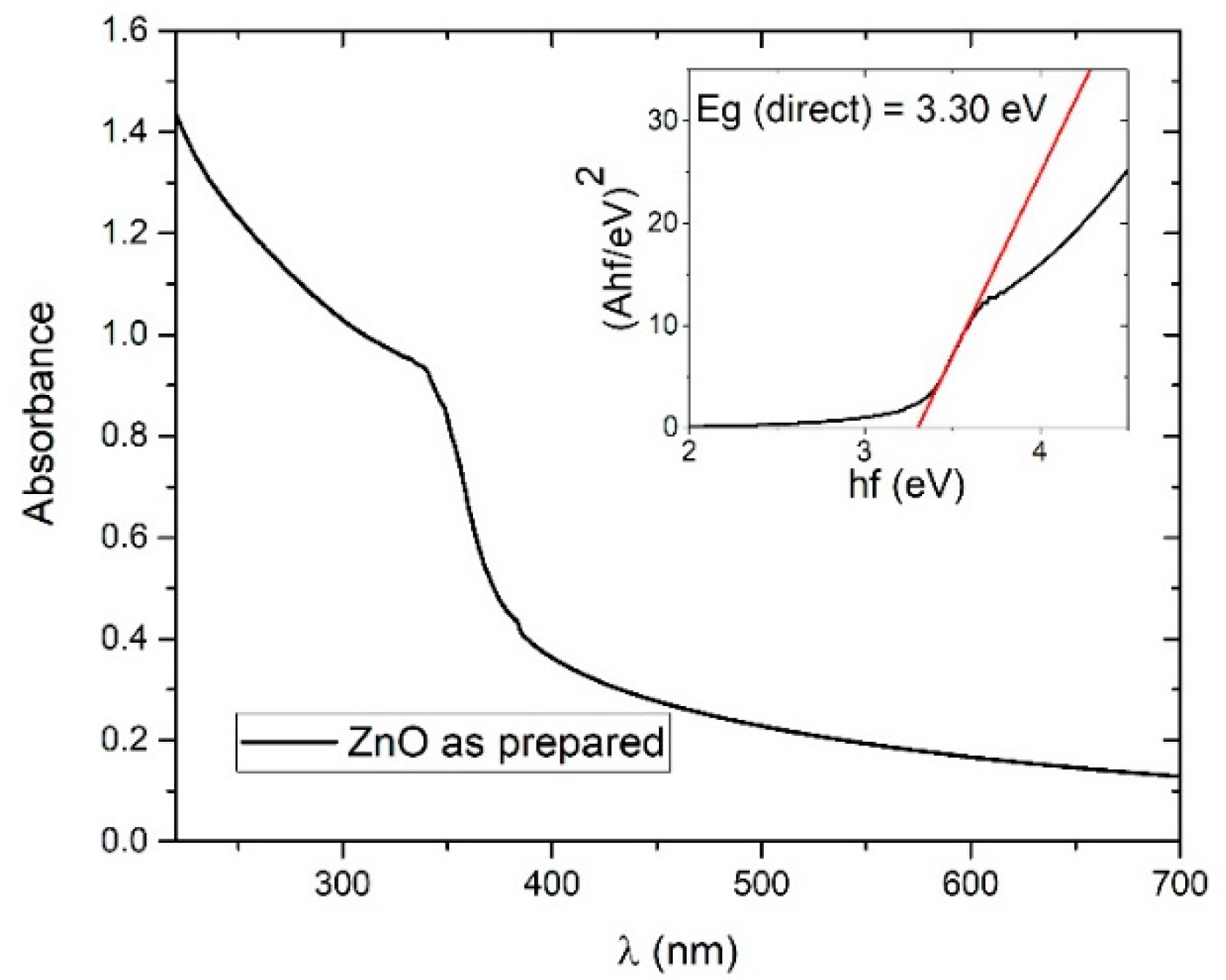 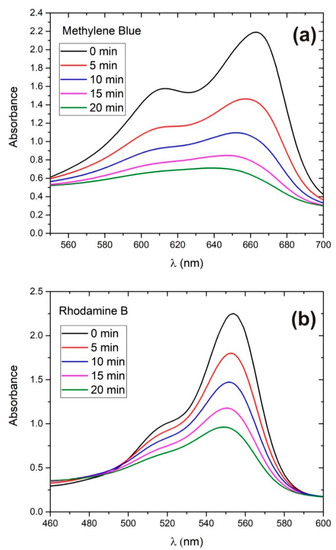 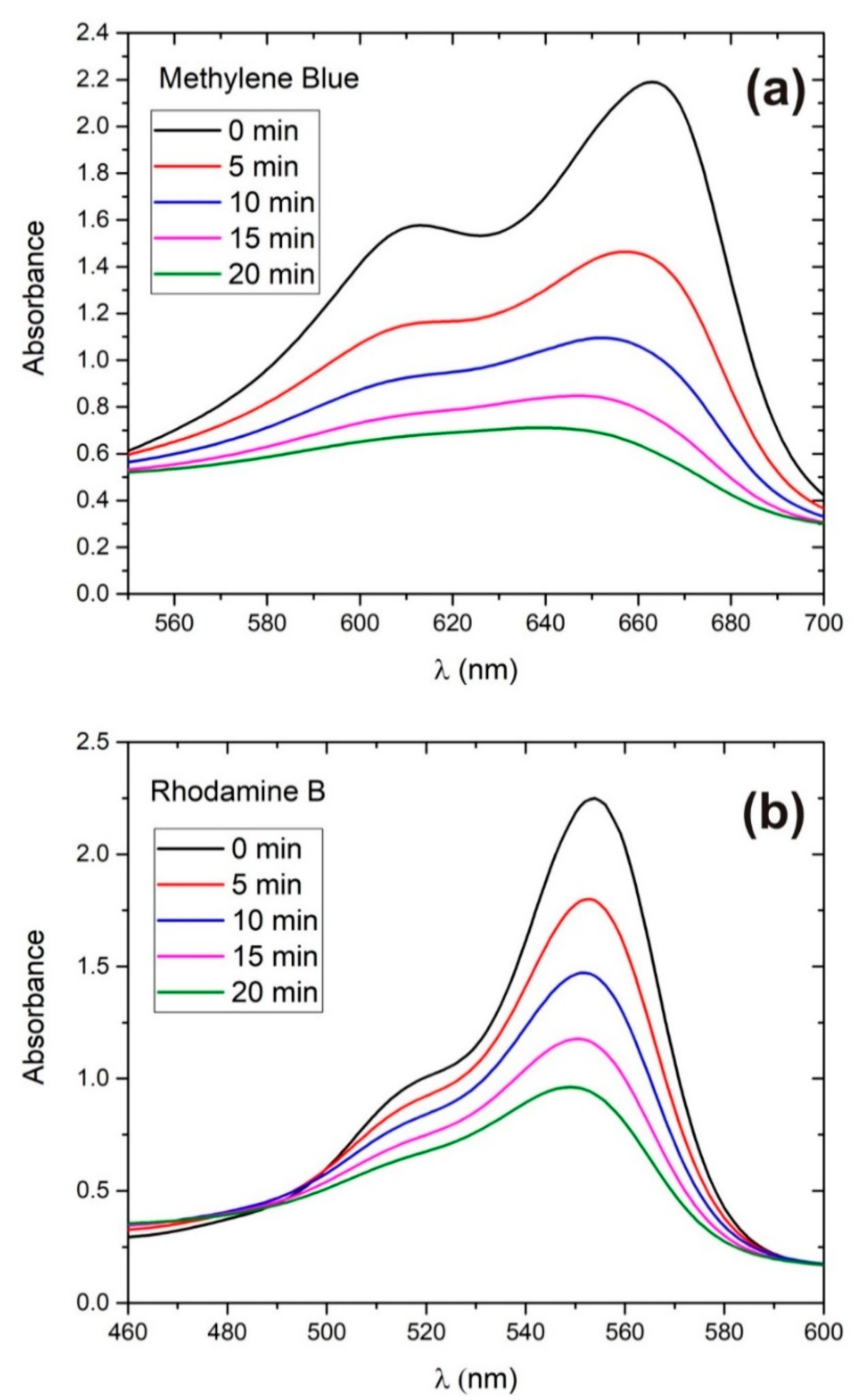 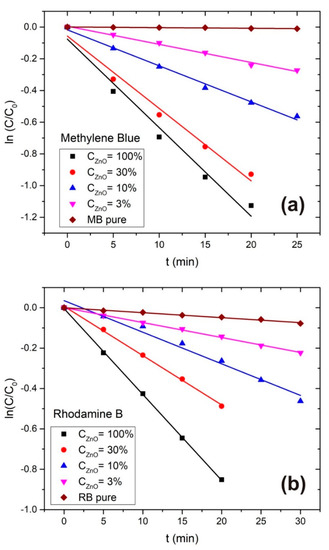 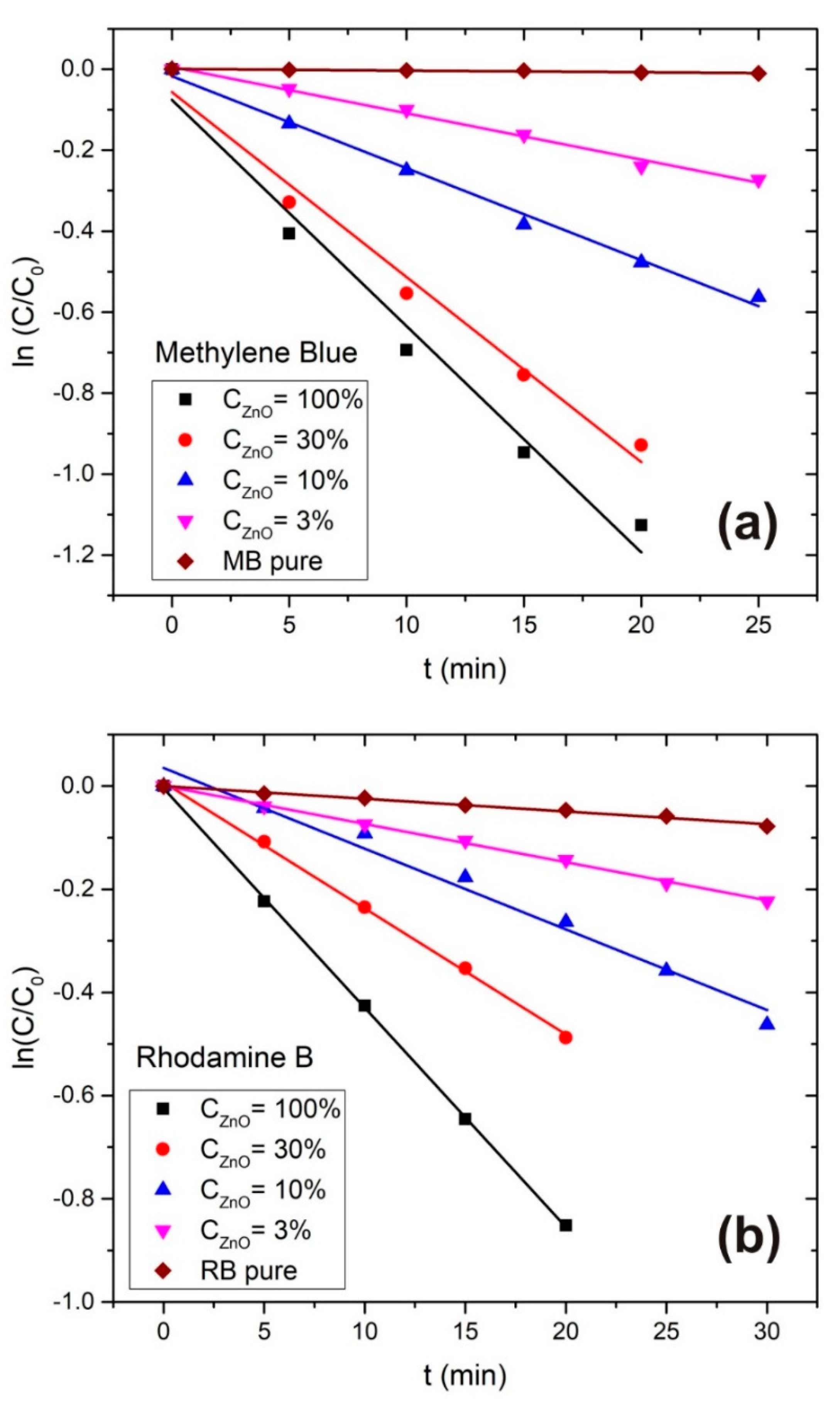