We investigate hole transfer in open carbynes, i.e., carbon atomic nanowires, using Real-Time Time-Dependent Density Functional Theory (RT-TDDFT). The nanowire is made of N carbon atoms. We use the functional B3LYP and the basis sets 3-21G, 6-31G*, cc-pVDZ, cc-pVTZ, cc-pVQZ. We also utilize a few Tight-Binding (TB) wire models, a very simple model with all sites equivalent and transfer integrals given by the Harrison expression (TBI) as well as a model with modified initial and final sites (TBImod) to take into account the presence of one or two or three hydrogen atoms at the edge sites. To achieve similar site occupations in cumulenes with those obtained by converged RT-TDDFT, TBImod is sufficient. However, to achieve similar frequency content of charge and dipole moment oscillations and similar coherent transfer rates, the TBImod transfer integrals have to be multiplied by a factor of four (TBImodt4times). An explanation for this is given. Full geometry optimization at the B3LYP/6-31G* level of theory shows that in cumulenes bond length alternation (BLA) is not strictly zero and is not constant, although it is symmetrical relative to the molecule center. BLA in cumulenic cases is much smaller than in polyynic cases, so, although not strictly, the separation to cumulenes and polyynes, approximately, holds. Vibrational analysis confirms that for N even all cumulenes with coplanar methylene end groups are stable, for N odd all cumulenes with perpendicular methylene end groups are stable, and the number of hydrogen atoms at the end groups is clearly seen in all cumulenic and polyynic cases. We calculate and discuss the Density Functional Theory (DFT) ground state energy of neutral molecules, the CDFT (Constrained DFT) “ground state energy” of molecules with a hole at one end group, energy spectra, density of states, energy gap, charge and dipole moment oscillations, mean over time probabilities to find the hole at each site, coherent transfer rates, and frequency content, in general. We also compare RT-TDDFT with TB results. View Full-Text
Keywords: charge (hole) transfer; Real-Time Time-Dependent Density Functional Theory (RT-TDDFT); Tight-Binding (TB); carbynes; cumulenes; polyynes charge (hole) transfer; Real-Time Time-Dependent Density Functional Theory (RT-TDDFT); Tight-Binding (TB); carbynes; cumulenes; polyynes
►▼ Show Figures 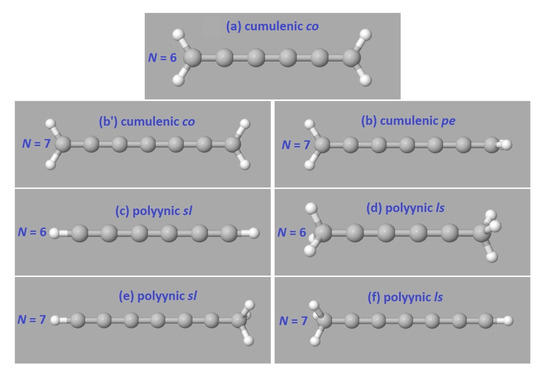