An Evaluation of the Reliability of the Results Obtained by the LBET, QSDFT, BET, and DR Methods for the Analysis of the Porous Structure of Activated Carbons
Previous Article in Special Issue

This study provides a novel approach to fabricating Al/C composites using laser powder bed fusion (LPBF) for a wide range of structural applications utilizing Al-matrix composites in additive manufacturing. We investigated the effects of LPBF on the fabrication of aluminum/multiwalled carbon nanotube (Al/MWCNT) composites under 25 different conditions, using varying laser power levels and scan speeds. The microstructures and mechanical properties of the specimens, such as elastic modulus and nanohardness, were analyzed, and trends were identified. We observed favorable sintering behavior under laser conditions with low energy density, which verified the suitability of Al/MWCNT composites for a fabrication process using LPBF. The size and number of pores increased in specimens produced under high energy density conditions, suggesting that they are more influenced by laser power than scan speed. Similarly, the elastic modulus of a specimen was also more affected by laser power than scan speed. In contrast, scan speed had a greater influence on the final nanohardness. Depending on the laser power used, we observed a difference in the crystallographic orientation of the specimens by a laser power during LPBF. When energy density is high, texture development of all samples tended to be more pronounced. View Full-Text
Keywords: metal–matrix composite; ball milling; laser powder bed fusion; microstructures; nanoindentation metal–matrix composite; ball milling; laser powder bed fusion; microstructures; nanoindentation
►▼ Show Figures 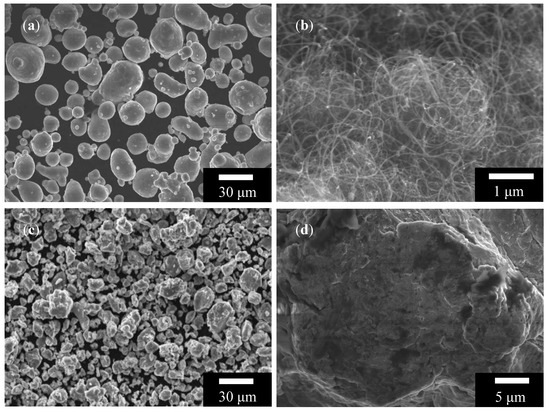