Polyhydroxyalkanoates (PHAs), due to their biodegradable and biocompatible nature and their ability to be formed in complex structures, are excellent candidates for fabricating scaffolds used in tissue engineering. By introducing inorganic compounds, such as bioactive glasses (BGs), the bioactive properties of PHAs can be further improved. In addition to their outstanding bioactivity, BGs can be additionally doped with biological ions, which in turn extend the functionality of the BG-PHA composite. Here, different PHAs were combined with 45S5 BG, which was additionally doped with copper in order to introduce antibacterial and angiogenic properties. The resulting composite was used to produce scaffolds by the salt leaching technique. By performing indirect cell biology tests using stromal cells, a dose-depending effect of the dissolution products released from the BG-PHA scaffolds could be found. In low concentrations, no toxic effect was found. Moreover, in higher concentrations, a minor reduction of cell viability combined with a major increase in VEGF release was measured. This result indicates that the fabricated composite scaffolds are suitable candidates for applications in soft and hard tissue engineering. However, more in-depth studies are necessary to fully understand the release kinetics and the resulting long-term effects of the BG-PHA composites. View Full-Text
Keywords: bioactive glass; copper; polyhydroxyalkanoates; tissue engineering; scaffolds bioactive glass; copper; polyhydroxyalkanoates; tissue engineering; scaffolds
►▼ Show Figures 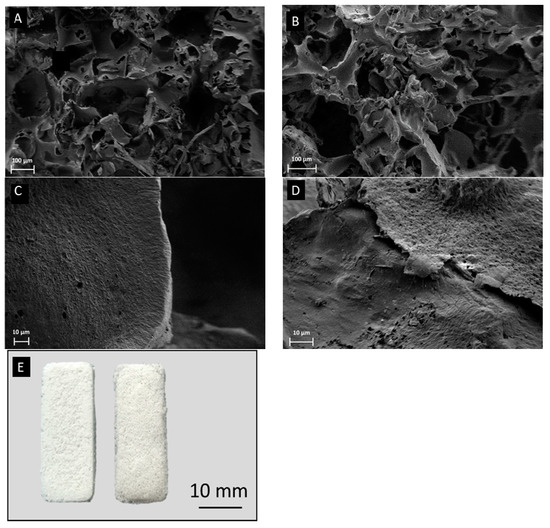