A universal increase in energy consumption and the dependency on fossil fuels have resulted in increasing severity of global warming, thus necessitating the search of new and environment-friendly energy sources. Hydrogen is as one of the energy sources that can resolve the abovementioned problems. Water splitting promotes ecofriendly hydrogen production without the formation of any greenhouse gas. The most common process for hydrogen production is electrolysis, wherein water molecules are separated into hydrogen and oxygen through electrochemical reactions. Solar-energy-induced chemical reactions, including photocatalysis and photoelectrochemistry, have gained considerable attention because of the simplicity of their procedures and use of solar radiation as the energy source. To improve performance of water splitting reactions, the use of catalysts has been widely investigated. For example, the novel-metal catalysts possessing extremely high catalytic properties for various reactions have been considered. However, due to the rarity and high costs of the novel-metal materials, the catalysts were considered unsuitable for universal use. Although other transition-metal-based materials have also been investigated, carbon-based materials, which are obtained from one of the most common elements on Earth, have potential as low-cost, nontoxic, high-performance catalysts for both photo and electrochemical reactions. Because abundancy, simplicity of synthesis routes, and excellent performance are the important factors for catalysts, easy optimization and many variations are possible in carbon-materials, making them more attractive. In particular, low-dimensional carbon materials, such as graphene and graphitic carbon nitride, exhibit excellent performance because of their unique electrical, mechanical, and catalytic properties. In this mini-review, we will discuss the performance of low-dimensional carbon-based materials for water splitting reactions. View Full-Text
Keywords: water splitting; electrochemistry; photoelectrochemistry; photocatalysis; carbon-based materials water splitting; electrochemistry; photoelectrochemistry; photocatalysis; carbon-based materials
►▼ Show Figures 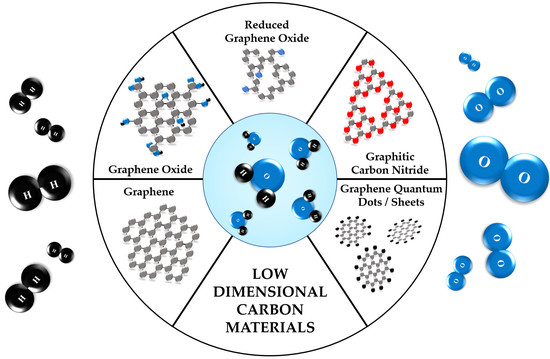