Influence of Ammonium Polyphosphate/Lignin Ratio on Thermal and Fire Behavior of Biobased Thermoplastic: The Case of Polyamide 11
Previous Article in Journal

Natural keratin fibres derived from Mexican tannery waste and coconut fibres from coconut processing waste were used as fillers in commercially available, biodegradable thermoplastic starch-polyester blend to obtain sustainable biocomposites. The morphology, rheological and mechanical properties as well as pyrolysis, flammability and forced flaming combustion behaviour of those biocomposites were investigated. In order to open up new application areas for these kinds of biocomposites, ammonium polyphosphate (APP) was added as a flame retardant. Extensive flammability and cone calorimeter studies revealed a good flame retardance effect with natural fibres alone and improved effectiveness with the addition of APP. In fact, it was shown that replacing 20 of 30 wt. % of APP with keratin fibres achieved the same effectiveness. In the case of coconut fibres, a synergistic effect led to an even lower heat release rate and total heat evolved due to reinforced char residue. This was confirmed via scanning electron microscopy of the char structure. All in all, these results constitute a good approach towards sustainable and biodegradable fibre reinforced biocomposites with improved flame retardant properties. View Full-Text
Keywords: biomaterials; biodegradable; calorimetry; composites; flame retardance biomaterials; biodegradable; calorimetry; composites; flame retardance
►▼ Show Figures 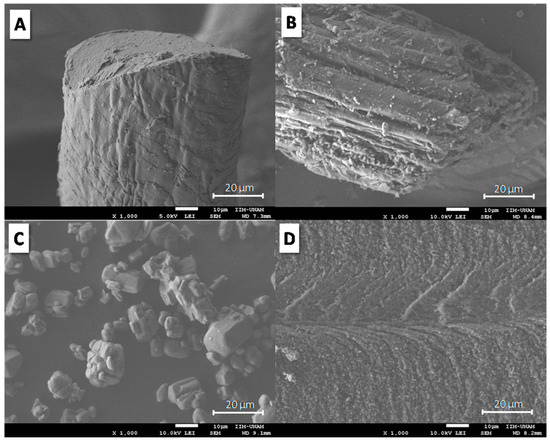