In this paper, the resistance to the freeze/thaw cycles for four groups of mortars (lime—LM, lime based—LBM, cement—CM, and aerated cement—ACM mortars) with different amount of mortar components within each group is quantified via a ratio of flexural/compressive strength after and before exposure to freeze/thaw cycles. Using a pore system obtained by three different methods (mercury intrusion porosimetry, X-ray micro-computed tomography analysis, and SEM (Scanning Electron Microscopy) analysis), an attempt was made to explain why some mortars achieved better resistance to freeze/thaw cycles than others. The mortars with lime as a binder in the composition (LM and LBM groups) did not survive the freezing and thawing regime, while no visible damage was recorded in samples of the CM and ACM group. It is concluded that the low initial value of the mechanical properties of the LM and LBM mortars, as well as the higher proportion of harmful pores (pores greater than 0.064 μm) compared to CM and ACM mortars are responsible for their poor durability. According the results of nanotomography, it is concluded that the most important factor influencing freeze/thaw resistance is pore connectivity—the higher the connectivity of the macropores, the higher the freeze/thaw resistance of the mortar. SEM analysis proved to be a very useful method for aerated cement mortars as it revealed the pore sizes that were not covered by mercury porosimetry and nanotomography. View Full-Text
Keywords: mortar; freeze/thaw resistance; mercury intrusion porosimetry; X-ray micro-computed tomography analysis; SEM analysis mortar; freeze/thaw resistance; mercury intrusion porosimetry; X-ray micro-computed tomography analysis; SEM analysis
►▼ Show Figures 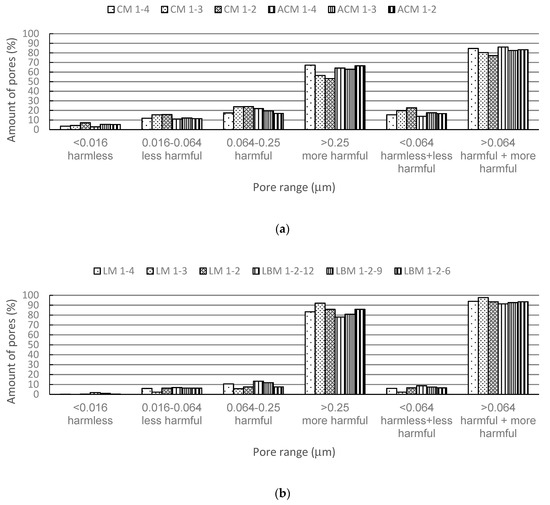