This study aims to investigate chip formation and surface generation during the precision turning of stainless steel 316L samples. A Finite Element Method (FEM) was used to simulate the chipping process of the stainless steel but with only a restricted number of process parameters. A set of turning tests was carried out using tungsten carbide tools under similar cutting conditions to validate the results obtained from the FEM for the chipping process and at the same time to experimentally examine the generated surface roughness. These results helped in the analysis and understanding the chip formation process and the surface generation phenomena during the cutting process, especially on micro scale. Good agreement between experiments and FEM results was found, which confirmed that the cutting process was accurately simulated by the FEM and allowed the identification of the optimum process parameters to ensure high performance. Results obtained from the simulation revealed that, an applied feed equals to 0.75 of edge radius of new cutting tool is the optimal cutting conditions for stainless steel 316L. Moreover, the experimental results demonstrated that in contrast to conventional turning processes, a nonlinear relationship was found between the feed rate and obtainable surface roughness, with a minimum surface roughness obtained when the feed rate laid between 0.75 and 1.25 times the original cutting edge radius, for new and worn tools, respectively. View Full-Text
Keywords: precision hard turning; chip formation; surface quality; minimum chip thickness; cutting edge radius; FEM precision hard turning; chip formation; surface quality; minimum chip thickness; cutting edge radius; FEM
►▼ Show Figures 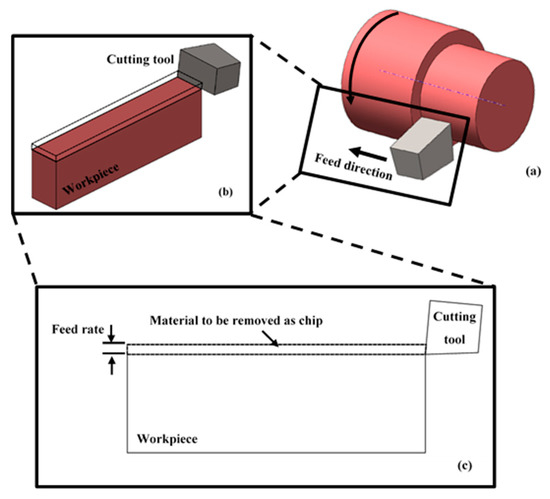