:
We fabricated fully dense titanium boride (TiB) whisker-reinforced Ti-6Al-4V alloy matrix (Ti6Al4V-TiB) composites, with a homogeneous dispersion, a TiB orientation perpendicular to the loading direction (; two-dimensional random direction) and an intimate Ti/TiB interface without an intermediate interfacial layer in the Ti-6Al-4V alloy matrix, by spark plasma sintering. Microstructural analysis allows us to present the tensile properties of the Ti6Al4V-TiB composites with the theories for discontinuous fiber-reinforced composites. The Ti6Al4V-TiB 10 vol.% composite yielded a Young’s modulus of 130 GPa, an ultimate tensile strength (UTS) of 1193 MPa and an elongation of 2.8%. The obtained experimental Young’s modulus and UTS of the Ti6Al4V-TiB composites were consistent with the theoretical values estimated by the Halpin-Tsai and Shear-lag models. The good agreement between our experimental results and these models indicates that the TiB whiskers behave as discontinuous fibers in the Ti-6Al-4V alloy matrix.
Keywords:
titanium matrix composite; tensile property; whisker; strengthening mechanism

Titanium (Ti) alloys are widely used as aerospace materials due to their high specific strengths and corrosion resistance. Moreover, the remarkable compatibility of Ti alloys with carbon fiber-reinforced plastics, which have recently come into use as structural materials for aircrafts, has led to an increase in the demand for the development of new Ti materials that possess higher specific strengths than conventional Ti alloys to further improve fuel efficiency. Among the available Ti materials, Ti matrix composites (TMCs) have attracted the most attention due to their potential for possessing higher specific mechanical properties than conventional Ti alloys [1,2]. Silicon carbide (SiC), aluminum oxide (Al2O3), silicon nitride (Si3N4) and boron carbide (B4C) have been considered as reinforcements for TMCs; however, the chemical compounds between these reinforcements and the Ti alloy at the interface often destabilize the TMCs [1,2,3,4]. It has been reported that titanium boride (TiB) whiskers can be formed in Ti alloys by the following chemical reaction: and that these TiB whiskers are chemically stable in the Ti alloys [1,2]. Furthermore, it seems that the slight difference in the thermal expansion coefficient between TiB (7.15 × 10−6 K−1) and Ti (8.6 × 10−6 K−1) [2,3] allows some of the remaining thermal stress inside the TiB whiskers to be dispersed within the Ti alloy matrix (Ti-TiB) composites. Therefore, it is likely that TiB can be a prime candidate for the reinforcement of TMCs [5,6,7].
Previous studies have reported that the existence of TiB whiskers causes the embrittlement of Ti alloys, while Ti-TiB composites have outstanding tensile strengths [8,9,10,11,12,13]. However, the agglomeration and incomplete precipitation of TiB whiskers in the Ti alloy matrix still inhibit our understanding of the relationship between the tensile properties and microstructure of Ti-TiB composites. Consequently, it has not been achieved neither understanding the strengthening mechanism of Ti-TiB composites yet, nor designing the microstructure of Ti-TiB composites to discuss their strengthening mechanism by the theories, to the best of our knowledge.
In this study, we fabricated TiB whisker-reinforced Ti-6Al-4V alloy matrix (Ti6Al4V−TiB) composites, which have an applicable microstructure for the equations for discontinuous fiber-reinforced composites. We evaluated the tensile properties of these Ti6Al4V-TiB composites and compared them with the theoretical values estimated by the equations for discontinuous fiber-reinforced composites to reveal their strengthening mechanism.

We prepared a spherical gas-atomized Ti-6Al-4V powder (TILOP64-45, OSAKA Titanium Technology Co., Ltd., Amagasaki, Japan), with a particle size of less than 45 μm, and a spherical titanium diboride (TiB2) powder (TiB2-NF, Japan New Metals Co., Ltd., Toyonaka, Japan), with a particle size of 1–2 μm, as the starting materials. After mixing the powder in air for 10 min by hand, we put the mixed powder into a graphite die, and consolidated at 800, 900, 1000 and 1100 °C for either 30 or 60 min under a uniaxial pressure of 10 MPa in a spark plasma sintering (SPS) machine (Dr. Sinter SPS-1050, Fuji Electric Industrial Co., Ltd., Tsurugashima, Japan). The quantity of TiB2 powder was controlled to obtain TiB volume fractions of 7.5, 10 and 12.5 vol.% in the final Ti6Al4V-TiB composites. The vacuum level was maintained at 5–6 Pa during SPS. The powders were heated at a rate of 50 °C/min. We inserted a graphite sheet, with a thickness of 0.2 mm, between the carbon die and mixed powder to avoid adhesion between the carbon die and the obtained Ti6Al4V-TiB composites after SPS. The temperature was monitored on the surface of the carbon die with a radiation thermometer, which was positioned in front of the glass porthole of the SPS machine. The Ti6Al4V-TiB composites were then cooled by furnace cooling. The size of the obtained Ti6Al4V-TiB composites was ϕ 50 × 2 mm2 for microstructural observation. For tensile tests, we fabricated Ti6Al4V-TiB composites, with a thickness of less than 1 mm, at 1100 °C for 60 min, to discuss their strengthening mechanism with the TiB orientation perpendicular to the loading direction (two-dimensional random direction) in the Ti matrix. We also consolidated a Ti-6Al-4V alloy (i.e., a Ti6Al4V-0 vol.% TiB composite) at 1100 °C for 60 min for comparison with the tensile properties and microstructure of the Ti6Al4V-TiB composites.
The chemical compositions of the Ti6Al4V-TiB composites were identified with X-ray diffraction (XRD; RINT Ultima II, Rigaku Corporation, The Woodlands, TX, USA) and a field emission electron probe micro analyzer (FE-EPMA; JXA-8530F, JEOL Ltd., Tokyo, Japan). The XRD patterns were obtained with a counting time of 4/s, a step size of 0.02° using CuK radiation, a voltage of 40 V and a current of 40 A. We determined the scanning range between 30° and 50°, with Ti, TiB2, and TiB having peaks at different angles, by the powder data files from the International Centre for Diffraction Data for 00-044-1294 (Ti), 00-035-0741 (TiB2) and 00-006-0641 (TiB) [14,15,16]. The acceleration voltage of the FE-EPMA was 15 kV. The microstructure of the Ti6Al4V-TiB composites was imaged with a field emission scanning electron microscope (FE-SEM; JSM-7001F, JEOL, Tokyo, Japan), operating at an acceleration voltage of 15 kV and using a back-scattered electron detector.
We prepared the tensile test specimens with the dimensions shown in Figure 1 from the fabricated Ti6Al4V-TiB composites by wire-cut electrical discharge machining (EDM, MV1200R, Mitsubishi Electric Corporation, Tokyo, Japan). The surface of the specimens was polished by waterproof abrasive papers with #600 roughness to remove the surface layer that was altered by the wire-cut EDM. Following ISO 6892-1 (“Metallic materials-Tensile testing-Part 1: Method of test at room temperature”), the tensile properties of the specimens were investigated using a material testing machine (Ag-50kN Xplus, Shimadzu Corporation, Kyoto, Japan) at room temperature and a cross-head speed of 0.5 mm/min. The strain of the specimens was monitored using a strain gauge (KFGS-1-120-C1-11, Kyowa Electronic Instruments Co., Ltd., Higashine, Japan) with a 1-mm gauge length and a nominal resistance of 120 Ω, which was positioned at the center of the specimens. The elongated part of the specimens was marked with two dots to evaluate the elongation of the specimens after the tensile tests. The fracture surface of the specimens was imaged with an FE-SEM (JSM-7001F, JEOL), operating at an acceleration voltage of 15 kV and using a back-scattered electron detector.

Kelly and Tyson proposed that the ultimate tensile strength (UTS) of oriented discontinuous fiber-reinforced composites, with a unidirectional fiber orientation, can be estimated by the shear-lag model [18,19]: and where the superscripts , and indicate the composite, fiber and matrix, respectively. and are UTS of the matrix and the matrix. is the stress on the matrix when the reinforcing fibers fracture in the composite, is the shear yield stress of the matrix (almost equal to half the tensile yield stress of the matrix) and is the critical length of the fiber, which determines which equation (Equations (7) or (8)) is used to estimate . is the required minimum value for a perfect load transfer, such that the reinforcing fibers could ultimately be loaded up to their UTS values and fail during the loading of the composite. Therefore, the loading of the composite involves failure of the reinforcing fibers when . Hence, the critical length is given as:
Equations (7)–(9) are for discontinuous fiber-reinforced composites with unidirectionally oriented fibers. Therefore, the fiber orientation must be considered to accurately estimate the UTS of composites, which have a two-dimensional random fiber orientation.
Fukuda and Chou proposed the orientation factor, , to account for the fiber orientations [20]. Equations (7) and (8) are thus modified to: and
The probability density functions with respect to fiber orientation, , are assumed as: where is the maximum fiber orientation angle.
The orientation factor, is calculated as: where

This work was performed under the inter-university cooperative research program (Proposal No. 19G0204) of the Cooperative Research and Development Center for Advanced Materials, Institute for Materials Research, Tohoku University, and also supported by the research grant from Casio Science Promotion Foundation.

We express our appreciation to Koichi Harata, from Tohoku University, for support and allowing us to work on the fabrication of specimens by SPS. 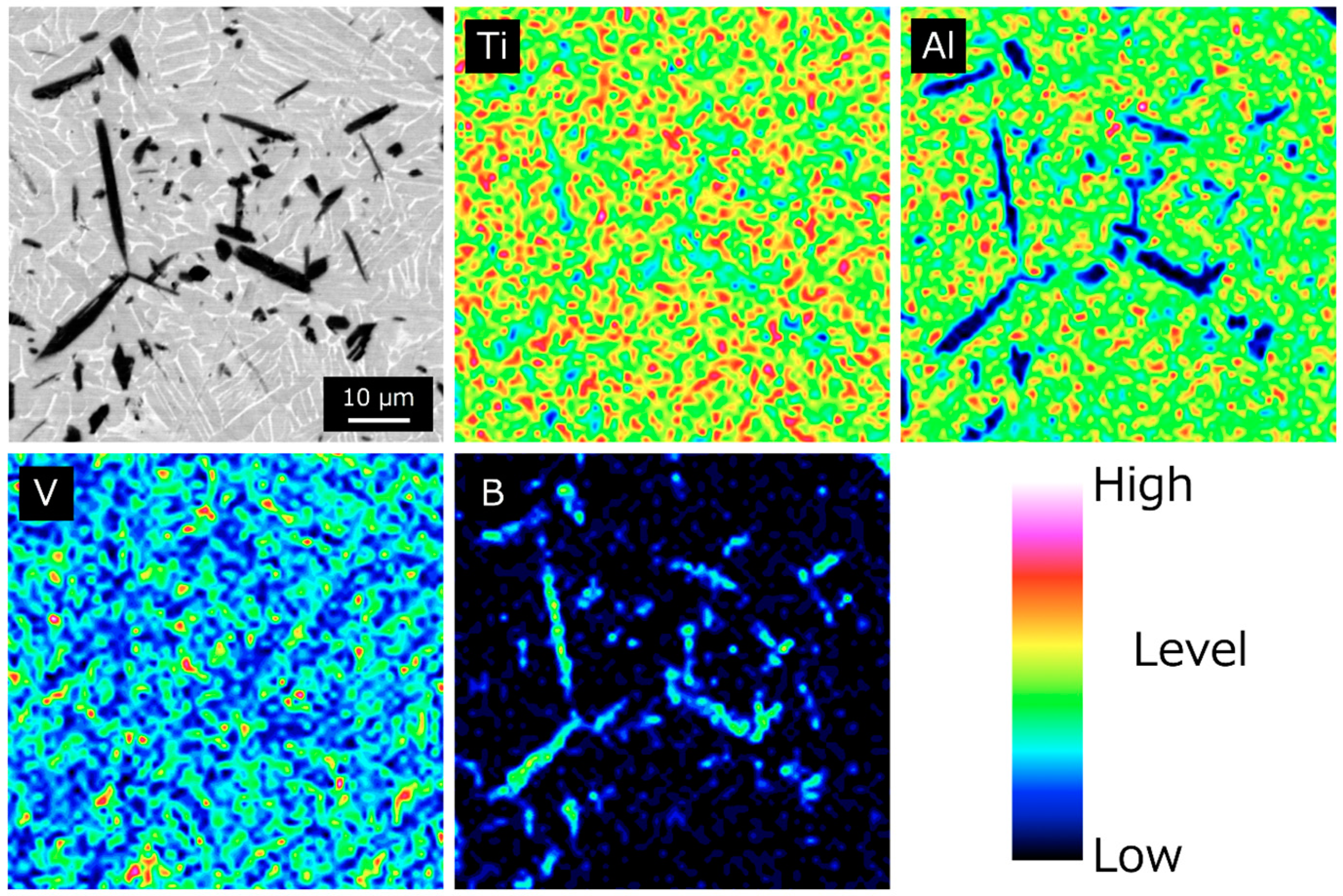 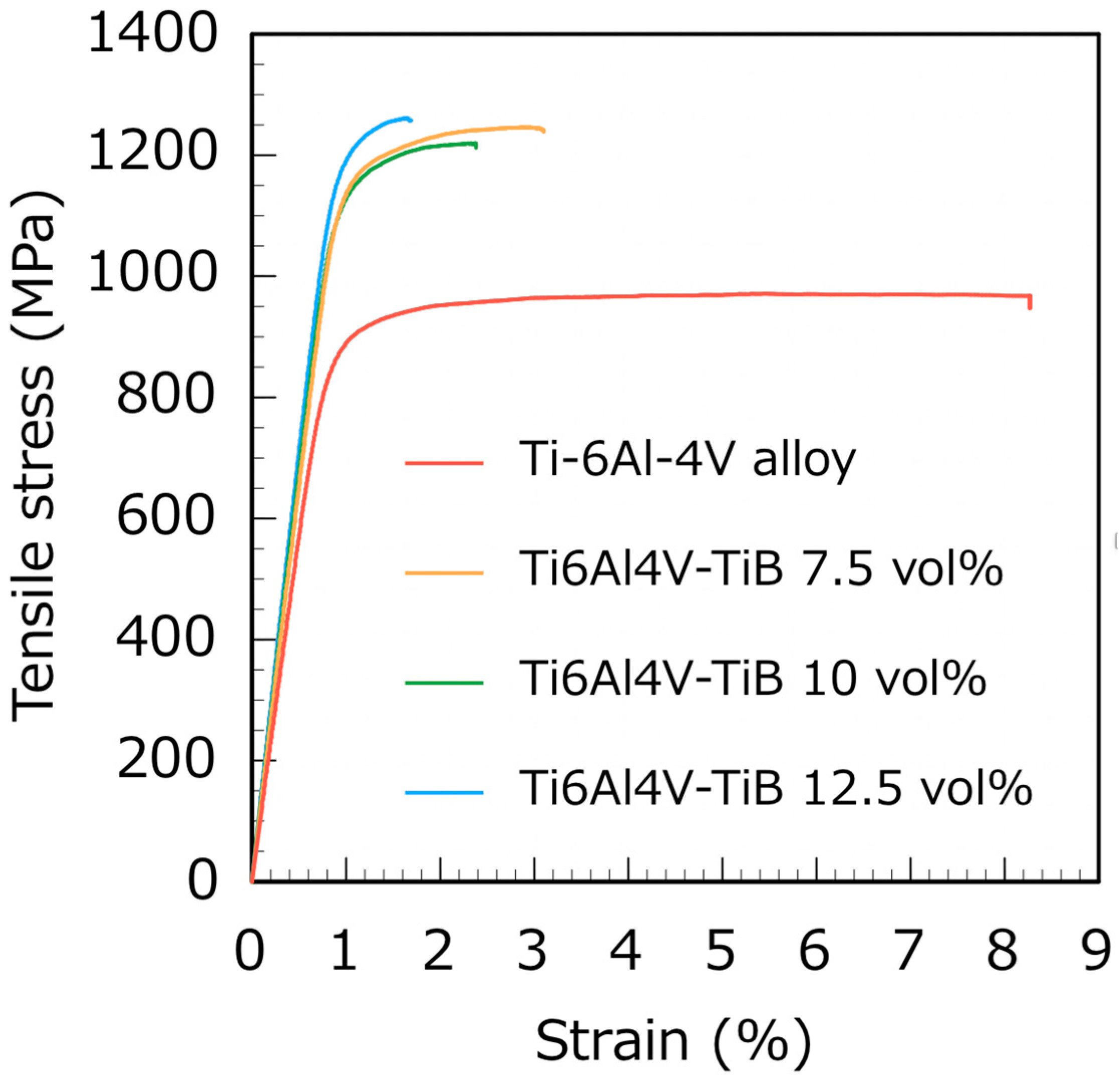 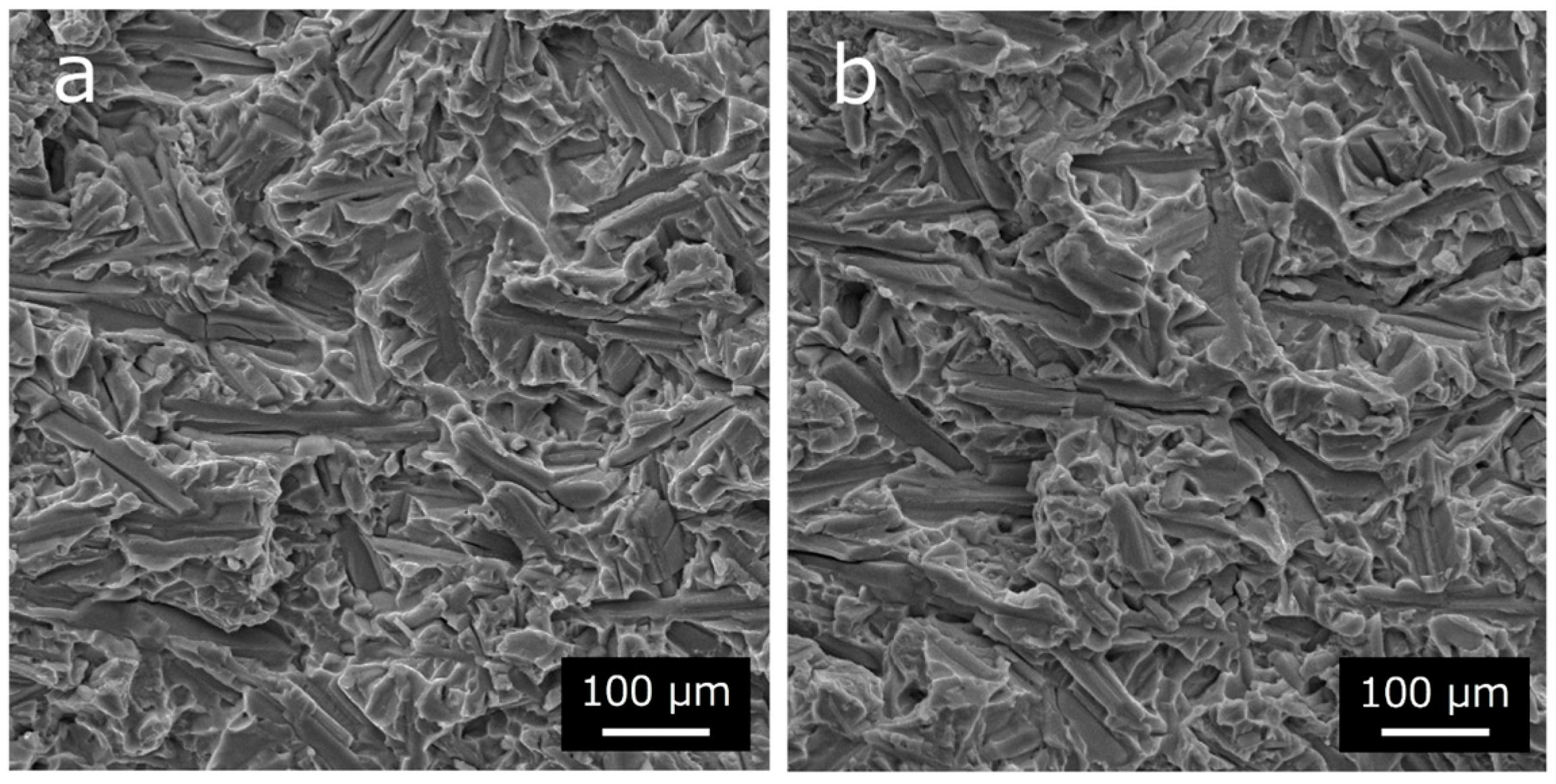