Minor Review: An Overview of a Synthetic Nanophase Bone Substitute

Hot-rolled AISI 316LN ASS sheets with a thickness of 10 mm were used in this study. The measured compositions (in wt %) were 0.01 C, 0.49 Si, 0.87 Mn, 17.09 Cr, 14.04 Ni, 2.56 Mo, 0.14 N, and balance Fe. The as-prepared materials were solution treated at 1050 °C (±5 °C) for 60 min under an argon atmosphere and subsequently water quenched to room temperature. The microstructure of ASS after solution treatment was a single-phase austenite with the grain size of about 80 μm, as given in [14]. Rectangular samples with a size of 100 × 50 × 5 mm3 were cut from the solid-solution sheet for the next rolling process. In cryorolling, samples were soaked in liquid nitrogen (−196 °C) for 10 min to guarantee the temperature before rolling. Then, the samples were taken out quickly for multi-pass rolling operation to a total reduction of 30%, 50%, 70%, and 90%, respectively. The samples were cryorolled in the strain rate range of = 0.6~1.5 s−1 from 10 to 1 mm thickness, i.e., an accumulated strain of ε = 2.32, with a reduction of ~5% per pass. The obtained cryogenic rolled steel sheets were labeled as CRx, where x refers to the percentage of the strain. Meanwhile, the room temperature rolled sheets were also obtained utilizing the same strains and labeled as RTRx.
The dimensional requirement of micro-tensile specimens can be found in [6]. Uniaxial tensile tests were performed on an Instron 5980 mechanical test system, and fracture surface morphology was conducted using a scanning electron microscope (SEM, JSM-5610LV) at an accelerating voltage of 20 kV. Microstructures were examined via optical microscopy (OM, Zeiss AxioVert A1) and transmission electron microscopy (TEM, JEOL-2100, operated at 200 kV). The samples for OM were etched in a solution that consisted of 0.20 g sodium-metabisulfate in 100 mL distilled water and 10 mL hydrochloric acid in 100 mL distilled water. The etching time varied from 2 to 5 min, depending on the fraction of martensite in each specimen, to enable the martensite phase to be adequately revealed as a dark phase. Thin foils for TEM were prepared by twin-jet electropolishing of 3 mm disks punched from the specimens using a solution of 10% perchloric acid in acetic acid as the electrolyte. X-ray diffraction (XRD) analysis was conducted to determine the phase composition of the rolled ASS on a D8 ADVANCE X-ray diffractometer with Cu–Kα as the incident source. The scan angle was selected from 40° to 100° with a step size of 0.02°. The tube voltage and current were 40 kV and 40 mA, respectively. (200), (220), (311) reflections of the austenite phase (γ) and (200), (211), (220) reflections of the martensite phase (α′) were chosen to calculate the volume fraction of strain-induced martensite (Vα′) at different strains. The formula [19] reads: .
Here, n denotes the number of selected reflections; I is the diffraction intensity factor; and R is the scattering factor of the materials. To obtain reliable Vα′, three different sites were selected randomly and the mean value was considered as the volume fraction of deformation-induced martensite.
Microhardness was measured using an MH-3 Vickers microhardness tester with 200 g normal load, 10 s loading time, and 5 s holding time on the polished region. An average microhardness value was determined based on five indentation measurements.

Figure 3 shows the optical micrographs of AISI 316LN ASS subjected to cryorolling and room temperature rolling with different deformation degrees. In CR30, a multiplicity of α′-martensites and slip lines are the main microstructure as shown in Figure 3a. Slip lines are typical signatures of dislocation gliding. In order to accommodate the severe plastic deformation, the austenite grains are deformed in the form of dislocation slips [14]. Due to the smaller deformation of the austenite grains under room temperature rolling condition, the number of slip lines is much less intensive when compared to the former deformation condition. Furthermore, owing to the intensified plastic deformation of α′-martensite, strain-induced martensites are broken up into finer laths, are elongated in the rolling direction, and presented in fiber morphology as shown in Figure 3c. Once rolled in room temperature, the 316LN ASS was associated with the induced martensite and remained austenite, in accordance with the XRD determination shown in Figure 1. The long stripes in Figure 3d clearly show severe plastic deformation of the initial austenite along the rolling direction.
We further studied the microstructural evolutions of the rolled samples through TEM. As shown in Figure 4a, CR30 was composed of dislocation tangles and even dislocation cells, strain-induced martensite. However, RTR30 mainly consisted of dislocation tangles and just a small amount of strain-induced martensite in local regions. At 50% strain, dislocation tangles and strain-induced martensite were the main features of the cryorolled steel, with the latter content substantially enhanced when compared to the case of CR30. The room temperature rolled sample RTR50 had a similar microstructure to CR30, but also contained some deformation twins. At the strain of 70%, the lath martensite structure (~100 nm width) became the primary content in CR70, while the mixture of lath martensite and dislocation tangles coexisted in RTR70. Of note, the martensite content increased significantly in RTR70. This was due to the additional nucleation sites for martensite transformation as a result of the interactions among the deformation twins, and between the deformation twins and dislocations. At a high strain of 90%, an obvious fragmentation of martensite was observed in the CR90. The selected area electron diffraction (SAED) pattern turned out to be a continuous ring, denoting an even distribution of nanometer-scaled grains. The main microstructure of the RTR90 remained as lath martensite. The lath was refined to a width ranging from 80 nm to 100 nm and the dislocation tangles were retained to some extent at the same time. Similar to Figure 4c, the corresponding diffraction spot was a discontinuous ring, mainly due to the microstructure of both the martensite and austenite.
Several studies [21,22] have shown that metastable austenite consists of many deformation twins or stacking faults before martensitic transformation. During the deformation process, the orientation between the newly generated martensite and parent phase austenite followed the Kurdjumov–Sachs (K–S) orientation relationship. To check the K–S validity in the present study, the microstructures of CR50 and RTR70 were carefully examined. The rolled steels had martensite volume fractions of 78.7% and 52.6%, respectively. By indexing the diffraction patterns in Figure 4c,f, it was found that {111} γ∥{011} α′; γ∥ α′. Thus, the classical K–S was kept under both rolling conditions. The results also revealed that cryorolled deformation did not change the way of new phase generation, but affected the transition dynamics. In other words, the deformation at cryogenic temperature mainly influenced the martensitic nucleation sites and the driving force of grain growth.

The effect of deformation temperature on the microstructure and mechanical properties of AISI316LN ASS was systematically investigated. The conclusions can be drawn as follows: 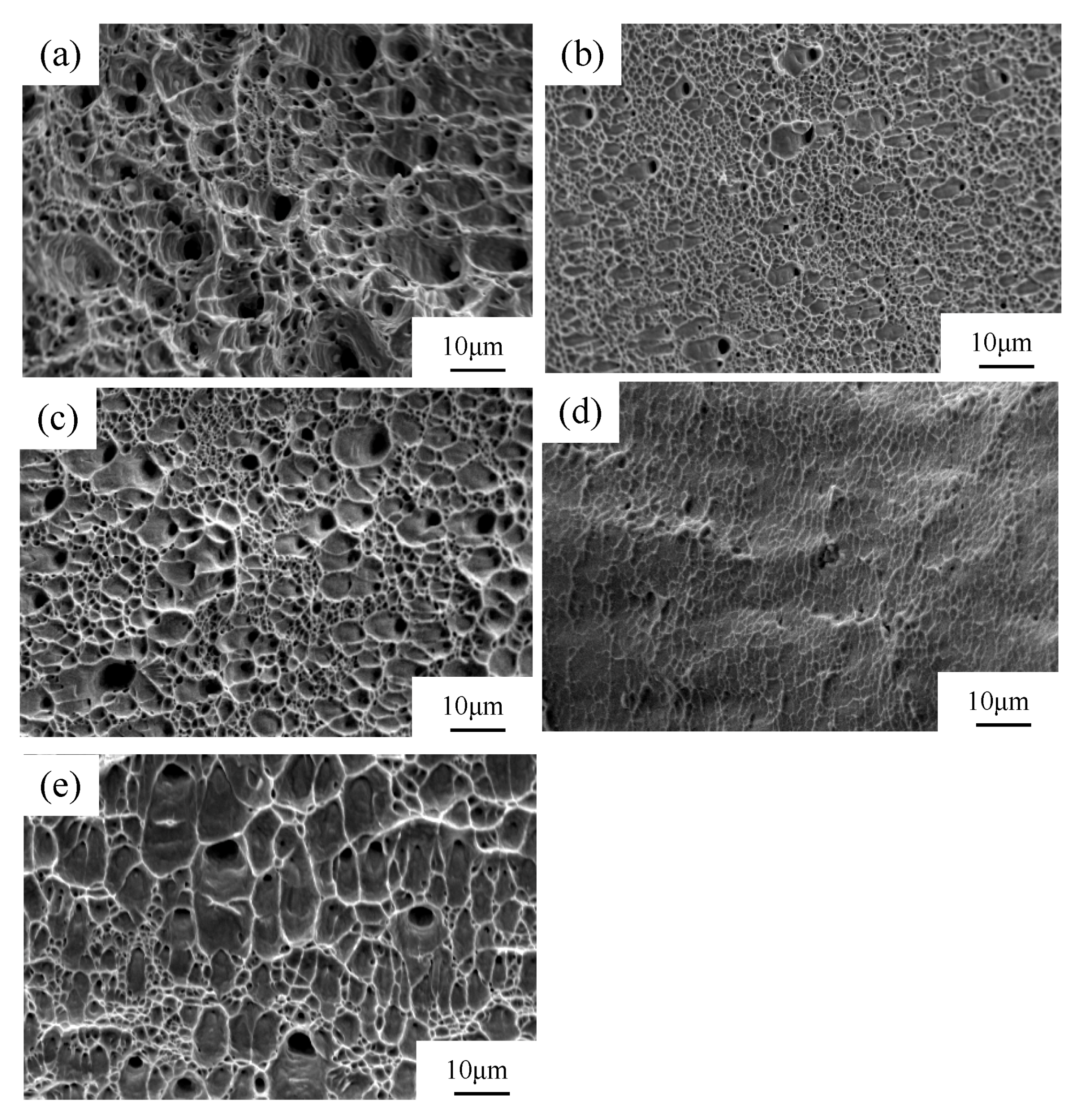