Photonic crystals (PCs) show reflectance spectra depending on the geometrical structure of the crystal, the refractive index (neff), and the light incident angle, according to the Bragg-Snell law. Three-dimensional photonic crystals (3D-PCs) composed of polymeric sub-micrometer spheres, are arranged in an ordered face cubic centered (fcc) lattice and are good candidates for vapor sensing by exploiting changes of the reflectance spectra. We synthesized high quality polystyrene (PS) 3D-PCs, commonly called opals, with a filling factor f near to the ideal value of 0.74 and tested their optical response in the presence of different concentrations of methanol (MeOH) vapor. When methanol was present in the voids of the photonic crystals, the reflectance spectra experienced energy shifts. The concentration of methyl alcohol vapor can be inferred, due to a linear dependence of the reflectance band maximum wavelength as a function of the vapor concentration. We tested the reversibility of the process and the time stability of the system. A limit of detection (LOD) equal to 5% (v/v0), where v was the volume of methanol and v0 was the total volume of the solution (methanol and water), was estimated. A model related to capillary condensation for intermediate and high methanol concentrations was discussed. Moreover, a swelling process of the PS spheres was invoked to fully understand the unexpected energy shift found for very high methanol content. View Full-Text
Keywords: photonic crystals; methanol vapor sensor; reflectance spectra; capillary condensation photonic crystals; methanol vapor sensor; reflectance spectra; capillary condensation
►▼ Show Figures 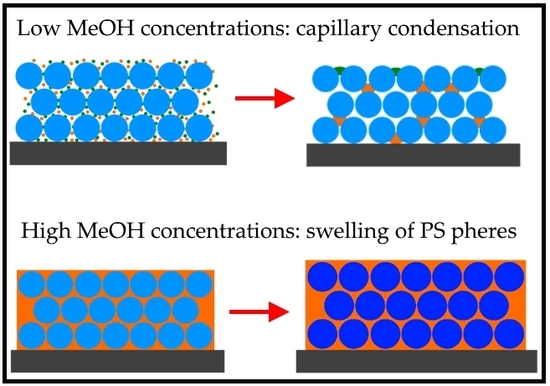