The Effect of Alloying Elements on the Structural Stability, Mechanical Properties, and Debye Temperature of Al3Li: A First-Principles Study

The fabrication of a valve through MJF technology with PA12 is presented in this study. PA12 powder was provided by 3D HP Jet Fusion 4200 (Hewlett Packard, Barcelona, Spain) with the following specifications (Table 1):
Specifically, a ball valve designed to isolate a liquid belonging to a conducting fluid system following the standard EN ISO 16135:2007 [26] and the directive 97/23/EC [27]. The valve is catalogued as PN10 (1 MPa). Nominal pressure (PN) is used as a reference for its mechanical resistance and corresponds to the maximum allowed water pressure at 20 °C.
For the sake of simplicity, only the main parts of the valve (shell and union nuts) were considered to be printed with MJF (11 and 3, respectively, in Figure 1). These exterior coverage parts support two pressure origins: the pressure from the inner parts and the hygroscopic pressure.
The printed parts were evaluated with the same quality tests applied to an industrial production valve. It must satisfy ISO 9393-1 [28]. This standard describes the method to verify the shell resistance under water pressure and the inner parts package effort. Together with the union nuts, they must withstand the tensile strain caused by the water pressure inside the valve and comply with ISO 228-1 [29].
The methodology used was divided into three stages. In the first stage, referred to as the fabrication process, the three-dimensional model was analysed. It was treated in the printing software. The thickness of the layer, the material used and the orientation of the parts in the space were set up. Before the printing process, the material was subjected to a tensile test to correctly characterize its mechanical properties. Also, a fractography analysis was done to characterize the porous media. Furthermore, a leaks study was implemented by using a flowmeter, given different printing orientations and wall thickness for a range of pressure values. In the s stage, the physical dimensions of the parts were verified by using a three-dimensional scan. This compares their dimensions with the tolerances allowed in the production of the valves. In cases where tolerances are not satisfied, machining of the parts must be performed. The full valve assembly will be checked with a leak test using air as a fluid. The final stage is product validation. This determines whether the complete valve satisfies the quality standard for valves made of thermoplastic material.
A 3D HP Jet Fusion 4200 (Hewlett Packard, Barcelona, Spain) was used to manufacture the parts of the valve. The printing parameters used were: 0.08 mm of layer height in the Z axis with a standard resolution of ±0.2%. A balanced print mode was set up: One rolling step and two injection passes spending 10.5 s per layer. Due to the shape of the parts, the cylindrical sections were oriented in the XY plain, where the resolution is highest. In the XY plane orientation, the step effect caused by an angular gradient lower than 30° in the Z axis is avoided.
Once manufactured, the parts were dimensionally analysed using a 3D scan (ATOS Scanbox 4105, Leuven, Belgium). Then the set was assembled in order to validate the product. The next stage was identifying whether there were any leakage points throughout the leak tester.
In this case, the shell test and the seat and packing test were studied. These tests provide information about the resistance and watertightness of the material. To carry out the tests, there are some necessary restrictions, as shown below:
The procedure established for the shell test is as follows:
The ISO 9393-2 [30] parameters of the trial according to the fabrication thermoplastic material are specified in detail. Since PA 12 is not included in the standard, the test parameters for the PVC-U, which is the original material of nut unions and shells, as well as being the most restrictive case, were used. The shell test parameters are shown in Table 2.
The procedure established for the seat and packing test is specified below:
Firstly, the sample must be filled with water and conditioned for at least 1 h at a specified temperature, which does not deviate more than ±2 °C.
The procedure determined for the seat and packing test and the corresponding parameters are specified in detail in the ISO 9393-2 [30], and they are shown in Table 3.

Tensile tests were carried out on specimens according to standard ASTM D638 [31] Type I. They were manufactured on three different printing directions, and stress versus strain curves were obtained. For each orientation, three specimens were tested. The results from such tensile tests are shown in Figure 2.
The mechanical properties were obtained from the tensile test curves. Furthermore, a comparison between these measurements and the reference values of polyamide resins and vinyl compounds are provided in Table 4. For each specimen, Young modulus (E), yield stress (σy), maximum stress (σm) and rupture strain (εr) are reported.
According to Galileo-Leibnitz, also known as the Clebsch-Rankine criteria [34], the maximum stress is calculated. The maximum stress for polyamides, according to Russian GOST normative 10589–63 [32], is within the range of 49–59 MPa approximately. The experimental results obtained were in the range 48–57 MPa. There is not a clear relation between fabrication direction and maximum stress. The observed rupture for all fabrication directions was cohesive and fragile, with ultimate strain lower than 5% in all cases.
In addition, an Analysis of Variance (ANOVA) test was performed, taking into account the maximum stress for the three populations: XY, YZ and ZX. The obtained results showed that there is no strong evidence to reject the null hypothesis, which considers that all the specimens belong to the same population, as the obtained p-value was 0.135. However, this result was partly expected, due to the low number of specimens for each population (3 specimens for each orientation). Specimens were directly printed for each direction, and did not require further manufacturing. For other techniques, the manufacturing of coupons might affect the results [35].

Leak tests were carried out with vessel samples made of PA12 with horizontal (H) and vertical (V) printing orientations. The inner diameter was a constant parameter (25 mm) for all the samples, with the wall thickness being the parameter to be modified in the range from 0.4 mm to 0.7 mm. The wall thickness was only modified in the cylindrical zone with a length of 50 mm. All tests were performed using a flowmeter to measure leaks at different pressures of up to 0.4 MPa.
Test results show that, for samples printed with the same orientation, lower thickness leads to higher leak values. On the other hand, for samples with the same wall thickness, the orientation has a great impact on the leak values, with the vertical orientation being the most critical. This is related to the number of layers and the air gaps that can form during the printing process. Concerning the printing height, the number of layers is greater with the vertical orientation; therefore, the probability of air gaps forming during the printing process is higher. Figure 3 shows the design of the samples, as well as the leak values at different pressures.
For a leak value of 3 L/h, the pressure drop (ΔP) values have been calculated in Table 5. It shows that both printing orientation and thickness are significant variables that affect leakage values.
This information is relevant for design engineers during the design phase. The design rules presented are very useful for making decisions about the dimension and printing strategy of the pressurized component. In Figure 4, two samples with different orientations, but with the same wall thickness, are sectioned and visually inspected through a fractography analysis. The quantity of pores found in the vertical orientation is much higher. It was concluded that the printing orientation plays a significant role in the creation of pores and consequently in the leakage.

The geometrical tolerances of all fabricated parts were checked and the distribution curves were obtained. The expected results for the standard resolution of the machine were satisfactory. Both parts were adequate in terms of tolerances, with dimensions varying ±0.3 mm. For this dimension range, machining of the parts was not necessary.

A pressure study was required prior to shell testing on the final assembly. Depending on the printing orientation, the efforts required for the part are different. In XY and YZ orientation, or horizontal direction, the stress applied during the trial is shown in Equation (1). where, σ = stress (MPa), t = thickness (mm), r = radius (mm), P = pressure (MPa).
In ZX orientation, or vertical direction, the stress applied during the trial is shown in Equation (2).
In this case, the cylindrical section was oriented in the XY plane, where the resolution is higher. In this trial, the pressure increased exponentially until it reached the set point (4.2 MPa). Following Equation (2), the total stress applied was 15.8 MPa. The security factor for PA12 is about 2.5. Therefore, there is no risk of explosion.
The pressure control system acts on the pump and the pressure multiplier to reduce the pressure until the set point. A stabilization time of thirty seconds was programmed. During this time, the pressure increases, and the environment is stabilized to the set point. The one-h test starts when pressure and temperature are constant. In this process, a non-significant pressure decrease is observed due to material expansion. It is placed in the elastic section, creating empty gaps and consequently diminishing the system pressure. Pressure deviations are not detected during the test process. The results were satisfactory, as no type of leak or valve explosion was found in the sample. Figure 5 shows the time series of the pressure evolution. As to the seat and packing assembly, the results were satisfactory in that no leakage was observed through the valve seat and packing during the trial time, as shown in Figure 5. In both cases, there was noise in the pressure measurement during the trial test time due to the sensor. The variation was approximately ±3 kPa.

Considering the performed tests and the analysis of the results, several conclusions can be drawn: 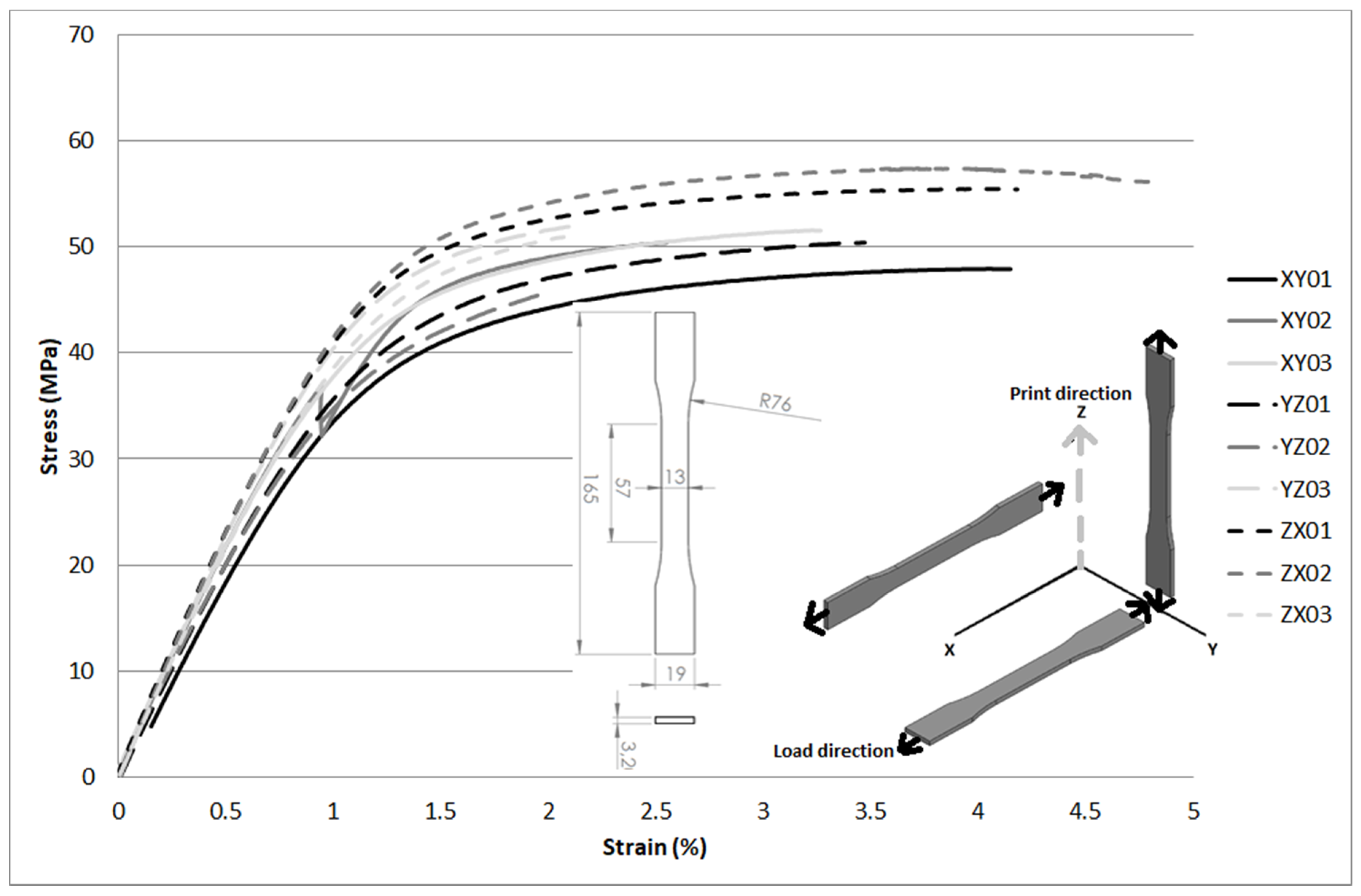 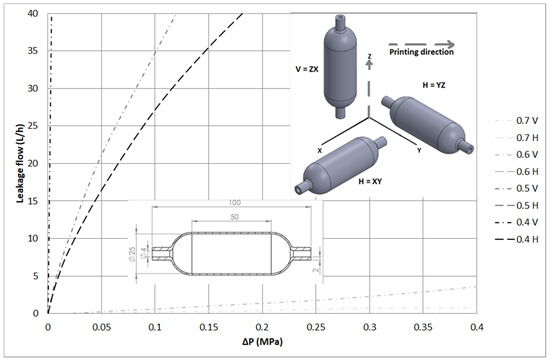 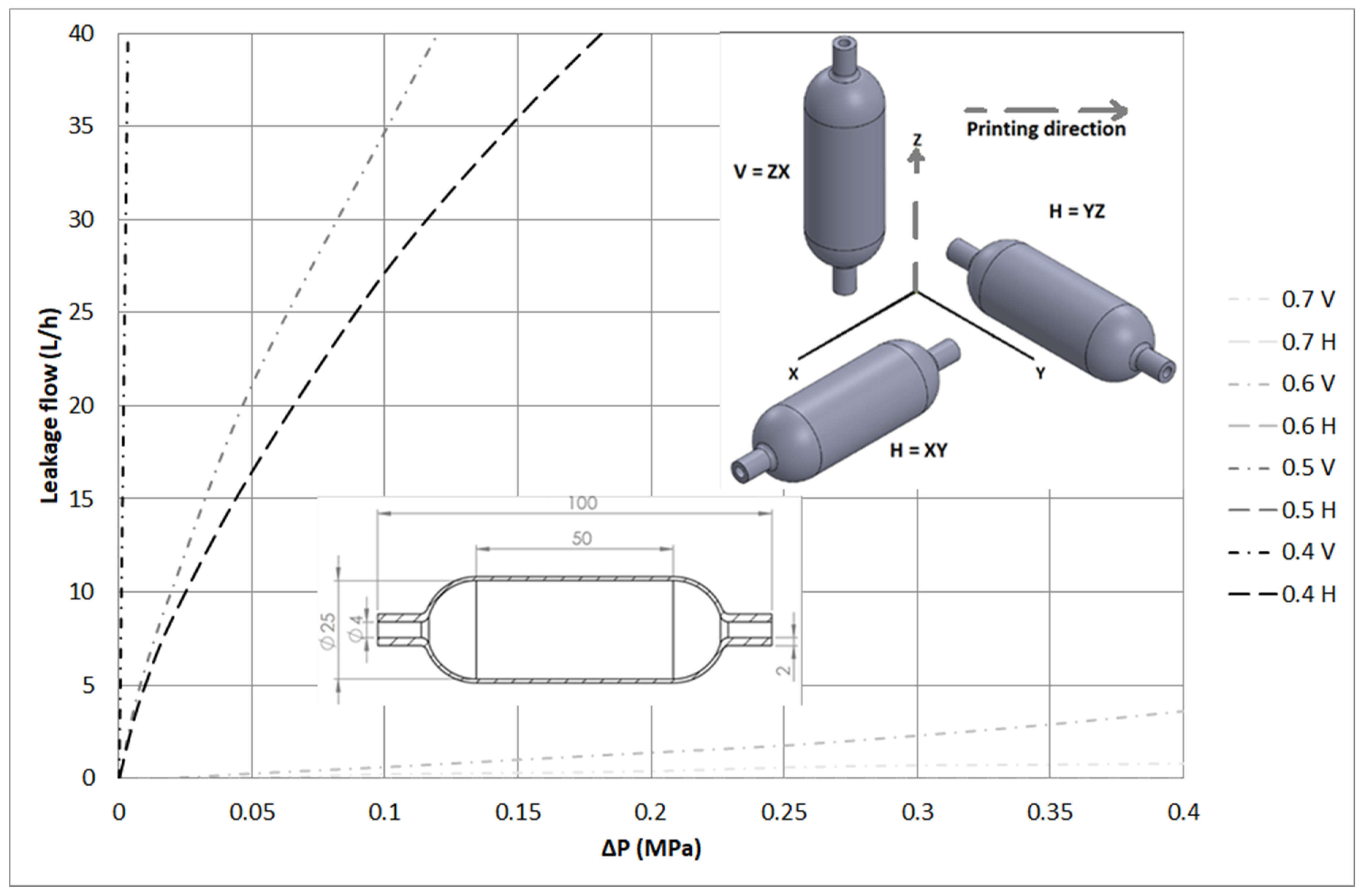 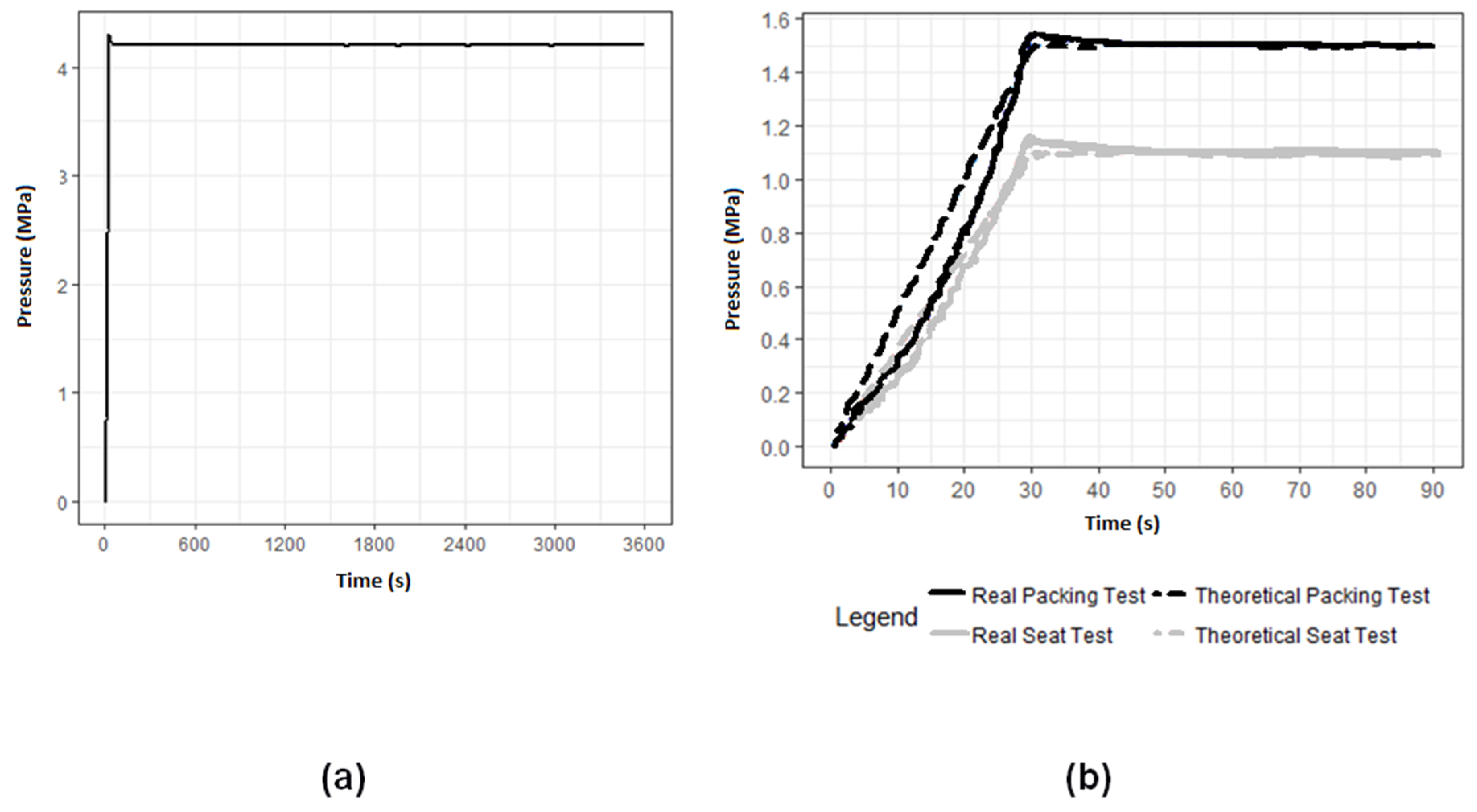