Polymerizable microspheres are introduced into acrylamide to prepare the high mechanical strength hydrogels with a novel three-dimensional pore structure. Rheological properties, compressive stress–strain, tensile property, and compression strength of three different types of hydrogels were investigated. Moreover, a scanning electron microscope (SEM) was adopted to observe the three-dimension network structure of three different types of hydrogels. The test results illustrated that viscous moduli (G″) and elastic moduli (G′) of a hydrogel containing polymerizable microspheres (P) reached maximum values, compared to the normal hydrogel (N) and the composite hydrogel containing ordinary microspheres (O). When the hydrogels were squeezed, the N was easily fractured under high strain (99%), whereas the P was not broken, and quickly recovered its initial morphology after the release of load. The P showed excellent tensile properties, with an elongation at break up to 90% and a tensile strength greater than 220 g. The compression strength of the N was 100.44 kPa·m−1, while the resulting strength of P was enhanced to be 248.00 kPa·m−1. Therefore, the various performances of N were improved by adding polymerizable microspheres. In addition, the SEM images indicated that N has a general three-dimensional network structure; the conventional network structure did not exist in the P, which has a novel three-dimensional pore structure in the spherical projection and very dense channels, which led to the compaction of the space between the three-dimensional pore network layers and reduced the flowing of free water wrapped in the network. Therefore, the mechanical strength of hydrogel was enhanced. View Full-Text
Keywords: composite hydrogel; three-dimensional pore structure; tensile property; compression strength; rheological properties composite hydrogel; three-dimensional pore structure; tensile property; compression strength; rheological properties
►▼ Show Figures 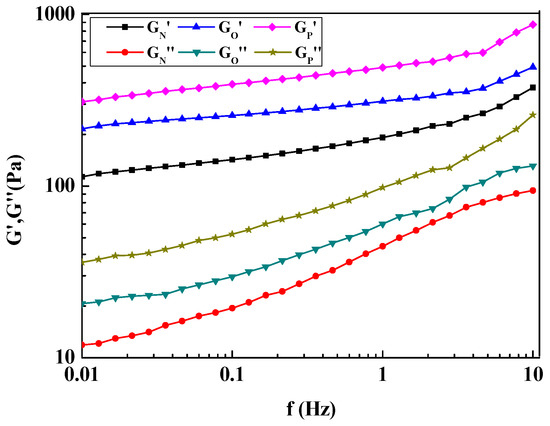