Natural bamboo charcoal (BC) powder has been developed as a novel filler in order to further improve performances of the polyvinyl alcohol (PVA)-based alkaline solid polymer electrolyte (ASPE) by solution casting method. X-ray diffraction patterns of composite polymer electrolyte with BC revealed the decrease in the degree of crystallinity with increasing content of BC. Scanning electron microscopy images showed pores on a micrometer scale (average diameter about 2 μm) distributed inside and on the surface of the membranes, indicating a three-dimension network formed in the polymer framework. The ionic conductivity was measured by the alternating-current (AC) impedance method, and the highest conductivity value of 6.63 × 10−2 S·cm−1 was obtained with 16 wt % of BC content and mKOH:mPVA = 2:1.5 at 30 °C. The contents of BC and KOH could significantly influence the conductivity. The temperature dependence of the bulk electrical conductivity displayed a combination of Arrhenius nature, and the activation energy for the ion in polymer electrolyte has been calculated. The electrochemical stability window of the electrolyte membrane was over 1.6 V. The thermogravimetric analysis curves showed that the degradation temperatures of PVA-BC-KOH ASPE membranes shifted toward higher with adding BC. A simple nickel-hydrogen battery containing PVA-BC-KOH electrolyte membrane was assembled with a maximum discharge capacity of 193 mAh·g−1. View Full-Text
Keywords: alkaline solid polymer electrolyte; polyvinyl alcohol; bamboo charcoal; ionic conductivity; nickel-hydrogen battery alkaline solid polymer electrolyte; polyvinyl alcohol; bamboo charcoal; ionic conductivity; nickel-hydrogen battery
►▼ Show Figures 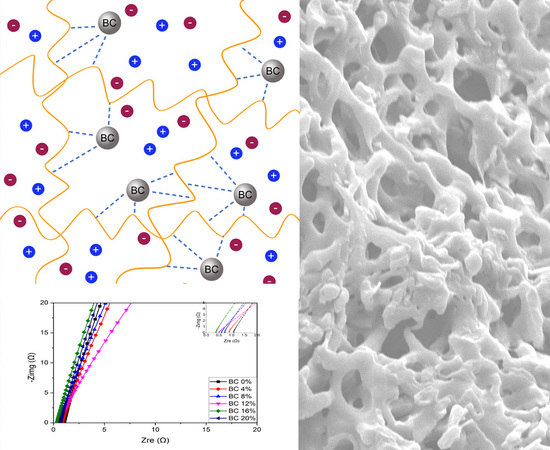