Ti-6Al-4V has been extensively used in structural applications in various engineering fields, from naval to automotive and from aerospace to biomedical. Structural applications are characterized by geometrical discontinuities such as notches, which are widely known to harmfully affect their tensile strength. In recent years, many attempts have been done to define solid criteria with which to reliably predict the tensile strength of materials. Among these criteria, two local approaches are worth mentioning due to the accuracy of their predictions, i.e., the strain energy density (SED) approach and the theory of critical distance (TCD) method. In this manuscript, the robustness of these two methods in predicting the tensile behavior of notched Ti-6Al-4V specimens has been compared. To this aim, two very dissimilar notch geometries have been tested, i.e., semi-circular and blunt V-notch with a notch root radius equal to 1 mm, and the experimental results have been compared with those predicted by the two models. The experimental values have been estimated with low discrepancies by either the SED approach and the TCD method, but the former results in better predictions. The deviations for the SED are in fact lower than 1.3%, while the TCD provides predictions with errors almost up to 8.5%. Finally, the weaknesses and the strengths of the two models have been reported. View Full-Text
Keywords: notched Ti-6Al-4V; strain energy density; theory of critical distances; SED; TCD; tensile strength; tensile strength prediction notched Ti-6Al-4V; strain energy density; theory of critical distances; SED; TCD; tensile strength; tensile strength prediction
►▼ Show Figures 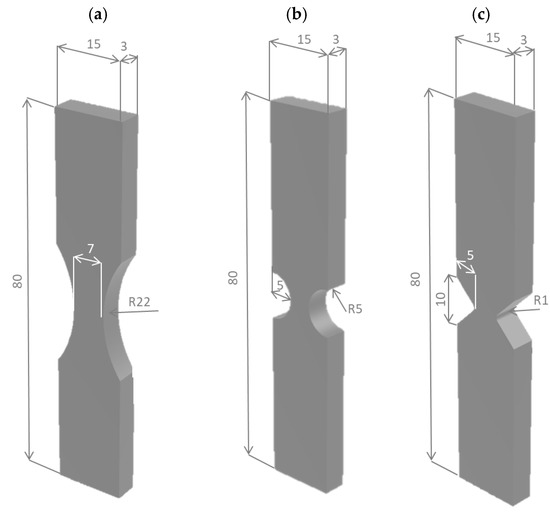