Experimental Investigation of the Effect of Hydrogen on Fracture Toughness of 2.25Cr-1Mo-0.25V Steel and Welds after Annealing

Over the last three decades, it has been frequently reported that the properties of dental restorative composites cured with argon laser are similar or superior to those achieved with conventional halogen and light emitting diode (LED) curing units. Whereas laser curing is not dependent on the distance between the curing unit and the material, such distance represents a drawback for conventional curing units. However, a widespread clinical application of this kind of laser remains difficult due to cost, heavy weight, and bulky size. Recently, with regard to the radiation in the blue region of the spectrum, powerful solid-state lasers have been commercialized. In the current research, CAD (computer-aided design)/CAM (computer-aided manufacturing) assisted solid-state lasers were employed for curing of different dental restorative composites consisting of micro- and nanoparticle-reinforced materials based on acrylic resins. Commercial LED curing units were used as a control. Temperature rise during the photopolymerisation process and bending properties were measured. By providing similar light energy dose, no significant difference in temperature rise was observed when the two light sources provided similar intensity. In addition, after 7 days since curing, bending properties of composites cured with laser and LED were similar. The results suggested that this kind of laser would be suitable for curing dental composites, and the curing process does not suffer from the tip-to-tooth distance. View Full-Text
Keywords: computer-aided design/computer-aided systems; dental materials; composites; mechanical properties; thermal properties; laser computer-aided design/computer-aided systems; dental materials; composites; mechanical properties; thermal properties; laser
►▼ Show Figures 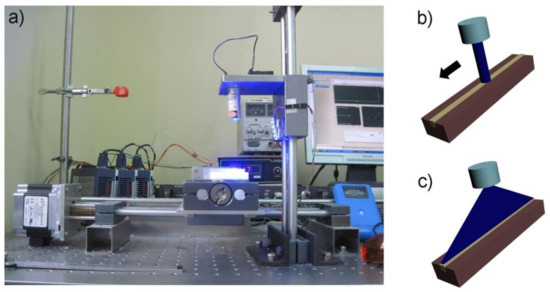