Experimental Investigation of the Effect of Hydrogen on Fracture Toughness of 2.25Cr-1Mo-0.25V Steel and Welds after Annealing

Hydrogen embrittlement (HE) is a critical issue that hinders the reliability of hydrogenation reactors. Hence, it is of great significance to investigate the effect of hydrogen on fracture toughness of 2.25Cr-1Mo-0.25V steel and weld. In this work, the fracture behavior of 2.25Cr-1Mo-0.25V steel and welds was studied by three-point bending tests under hydrogen-free and hydrogen-charged conditions. The immersion charging method was employed to pre-charge hydrogen inside specimen and the fracture toughness of these joints was evaluated quantitatively. The microstructure and grain size of the specimens were observed by scanning electron microscopy (SEM) and by metallurgical microscopy to investigate the HE mechanisms. It was found that fracture toughness for both the base metal (BM) and the weld zone (WZ) significantly decreased under hydrogen-charged conditions due to the coexistence of the hydrogen-enhanced decohesion (HEDE) and hydrogen-enhanced localized plasticity (HELP) mechanisms. Moreover, the formation and growth of primary voids were observed in the BM, leading to a superior fracture toughness. In addition, the BM compared to the WZ shows superior resistance to HE because the finer grain size in the BM leads to a larger grain boundary area, thus distributing more of the diffusive hydrogen trapped in the grain boundary and reducing the hydrogen content. View Full-Text
Keywords: welding; fracture toughness; hydrogen embrittlement; 2.25Cr-1Mo-0.25V welding; fracture toughness; hydrogen embrittlement; 2.25Cr-1Mo-0.25V
►▼ Show Figures 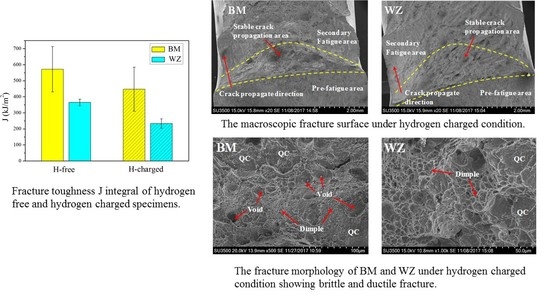