POWERSIL®737 manufactured by Wacker Chemical Co., Ltd. (Munich, Germany), was used for sample preparation. This is an A/B two-component addition type LSR and is different from traditionally used high temperature vulcanization or room temperature vulcanization SR because of its low viscosity, excellent mechanical properties, and outstanding dielectric behavior. SiC nanoparticles were obtained from Hefei Kelvin Energy Technology Co., Ltd. (Hefei, China) (purity ≥ 99.9%, average size 60 nm).
The flow chart of the preparation of the SiC/LSR nanocomposites is shown in Figure 1. The sample preparation process was as follows: a weighed quantity of A/B rubber and a certain amount of SiC nanoparticles were taken in a beaker and mixed using a multifunctional agitating machine and evacuated repeatedly until no bubbles were generated. Then, the rubber was molded under a flat vulcanizing machine for 10 min at 393 K and 15 MPa; the secondary vulcanization was performed in a circulating air oven with fresh air supply at 473 K for 4 h. Finally, the samples were placed in a drying oven for 24 h to eliminate the impurities and moisture. The samples had a radius of 50 mm and a thickness of 0.3 mm.

The dielectric properties of the pure LSR and SiC/LSR nanocomposites were tested according to the following aspects:
(a) Conductivity: The DC conductivity of the LSR and SiC/LSR samples was measured at room temperature by a three-electrode system, as shown previously [27]. A high-voltage electrode was connected to a DC source through a series of resistance. The DC source had an output voltage of 0–10 kV to obtain DC electric field conductivity varying from 0.1 to 30 kV/mm. The stable current (I) was recorded after applying the DC voltage for 10 min. For accuracy, multiple samples were employed to ensure repeatability, and the average values were considered.
(b) Dielectric spectrum: The dielectric spectrum of the pure LSR and SiC/LSR samples was tested using a broadband dielectric/impedance spectrometer (Concept 80, Novocontrol Technologies, Montabaur, Germany). The test frequency range was 10−1–107 Hz. The samples were deposited on both sides of a gold electrode, and the diameter of the test specimen was 20 mm.
(c) Dielectric strength: The DC breakdown electric field strength of the samples was measured with a two-electrode system, and the entire testing system was placed in an epoxy resin drum with transformer oil (as shown in Figure 2). The test was based on Standardization Administration of China (SAC) Publication No. GB/T 1408.2-2006, which is equivalent to standard IEC 60243. The Weibull distribution was used to characterize the DC breakdown strength after discarding the maximum and minimum values.
(d) Thermal stimulated current (TSC) test: The SiC/LSR samples was polarized under an electric field of 10 kV/mm at 333 K for 10 min to characterize their trap parameters. Afterwards, the temperature was decreased to 273 K quickly using liquid nitrogen until the depolarization current of sample was less than 1 pA. Then, the temperature was linearly increased to 393 K at 3 K/min and the TSC of the sample was measured. The TSC measurement system included a Keithley 6517B electrometer, a DC high voltage generator, vacuum equipment, and heating and cooling systems. The setup of the TSC measurement system and test conditions are shown in Figure 3 and Figure 4, respectively.

The micro morphology of the pure LSR and SiC/LSR nanocomposites with different SiC concentrations was observed using scanning electron microscopy (SEM, SU8020 Hitachi High Technologies Corp., Tokyo, Japan). The central area of observation and the cross-sectional SEM photographs are shown in Figure 5. In the figure, we can observe that the dispersion of the SiC nanoparticles in the matrix decreased with increasing SiC concentration because high concentrations made the nanocomposite prone to agglomeration.

TSC tests were conducted to represent the trap parameters of the LSR nanocomposites. The TSC curves of the pure LSR and 3 wt % SiC/LSR nanocomposites are shown in Figure 10.
Under high temperature and DC electric field, the migrated carriers of the sample were easily trapped by the polymer. On decreasing the temperature to 273 K rapidly using liquid nitrogen, the trapped carriers were “frozen”. During the subsequent slow warming process, the trapped carriers were able to “escape” because of thermal excitation, and the weak currents were recorded by the 6517B electrometer (Keithley, Cleveland, OH, USA). By analyzing the TSC curve in Figure 10, trapped charge could be obtained by the following equation: where I(T) is the TSC current value; T1 and T2 are the initial and end temperatures, respectively; and β is the temperature increase rate (3 K/min).
Meanwhile, the trap level could be calculated according to the half-width method by the following equation: where Tm is the temperature corresponding to the peak current, ∆T is the temperature difference between the two half-peak values, and k is the Boltzmann constant [30]. The trap parameters of the pure LSR and SiC/LSR samples are shown in Table 2.
As shown in Table 2 and Figure 9, the trap charge quantity and trap level of the SiC/LSR nanocomposites were lower than those of pure LSR. The trap density and charge trap depth were also decreased due to SiC nanoparticles provide the shallow traps. The trap parameters of the polymer were closely related to their macroscopic dielectric properties [31]. The charge trap depth, which controls the charge mobility, represents the required energy for carriers to jump from the trap energy level to the specific energy level in which they can participate in electric conduction in nanocomposite. Therefore, the probability of the charge carriers trapping of the SiC/LSR nanocomposites was reduced, making more carriers participate in the conduction easily, thereby increasing the charge mobility. Thus, the SiC/LSR nanocomposites have better nonlinear conductivity and the reduction in energy required corresponds to the lower threshold electric field of SiC/LSR nanocomposites. Specifically, the DC conductivity was inversely proportional to the trap charge and the breakdown strength was directly proportional to the trap level. Thus, the results of this study are in complete agreement with previous results [32]. In summary, SiC nanoparticles doping could improve the sensitive dependence of LSR to electric field stress and temperature changes while lowering the trap level and decreasing the number of carriers trapped. As a result, the number of charge carriers involved in electric conduction substantially increased microscopically and the conductivity of SiC/LSR nanocomposites significantly increased macroscopically. This was beneficial for current matching with XLPE cable insulation and uniformly improved the electric field distribution in cable accessories, thus improving their safety and reliability.

Based on the experimental study of the dielectric properties of SiC/LSR nanocomposites, the following conclusions can be drawn:

(1)
SiC nanoparticles doping decreases the breakdown strength of LSR, greatly increases its conductivity, and increases its relative permittivity and dielectric loss factor.
(2)
SiC/LSR nanocomposites have better nonlinear conductivity characteristics than pure LSR, as their temperature coefficient and nonlinear coefficients are greatly improved, which in turn makes the distribution of the electric field more uniform in HVDC cable accessories.
(3)
The introduction of SiC nanoparticles leads to the decrease in the trap level and trap charge of LSR, which affects the transport of carriers in the polymers. The TSC test verifies that the trap parameters have an important effect on the macroscopic dielectric properties of the polymer. 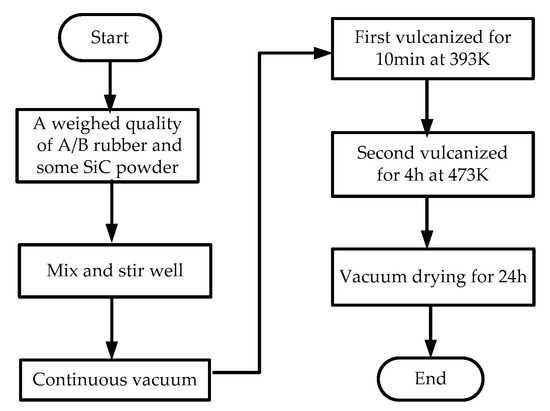 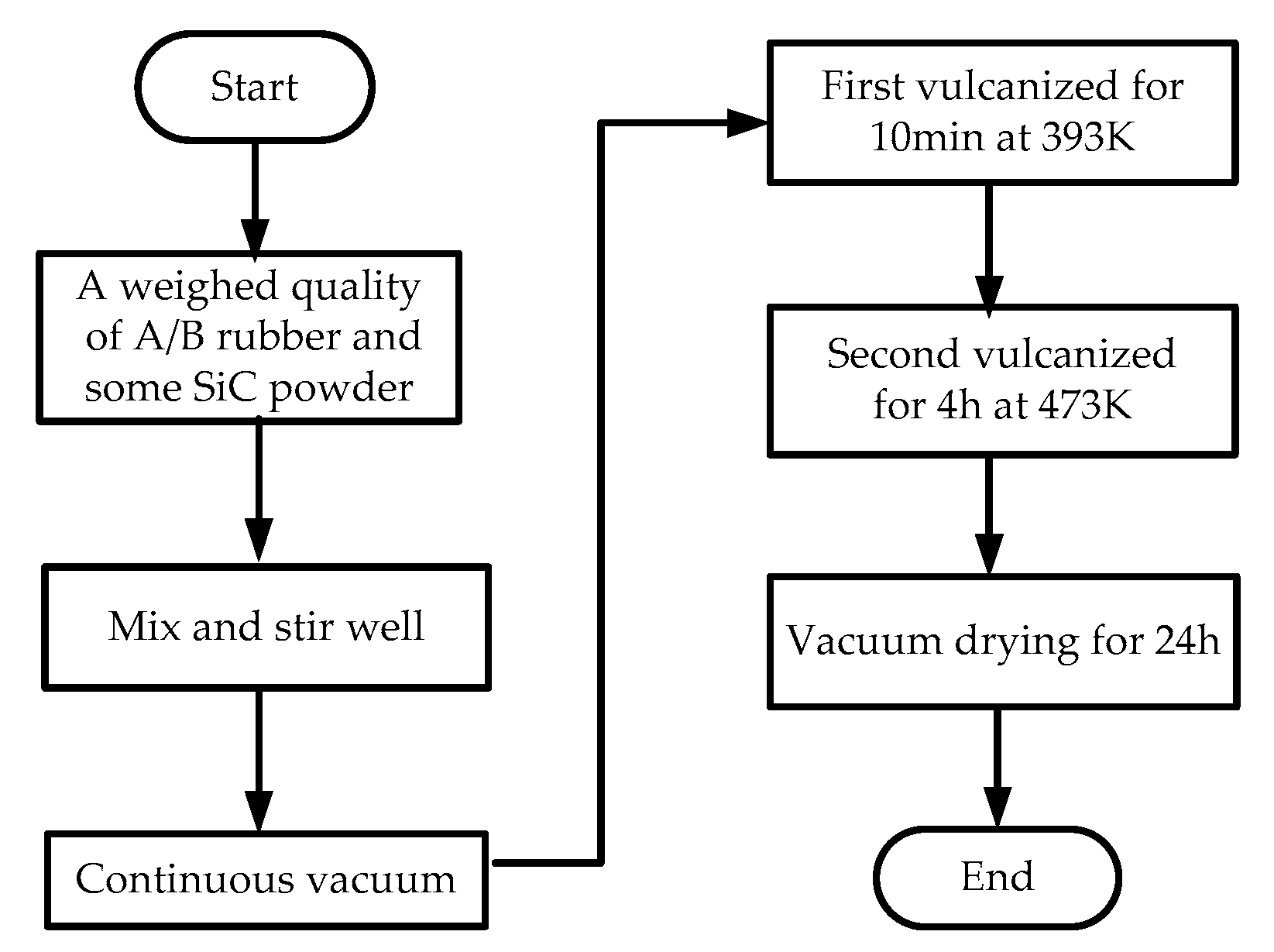 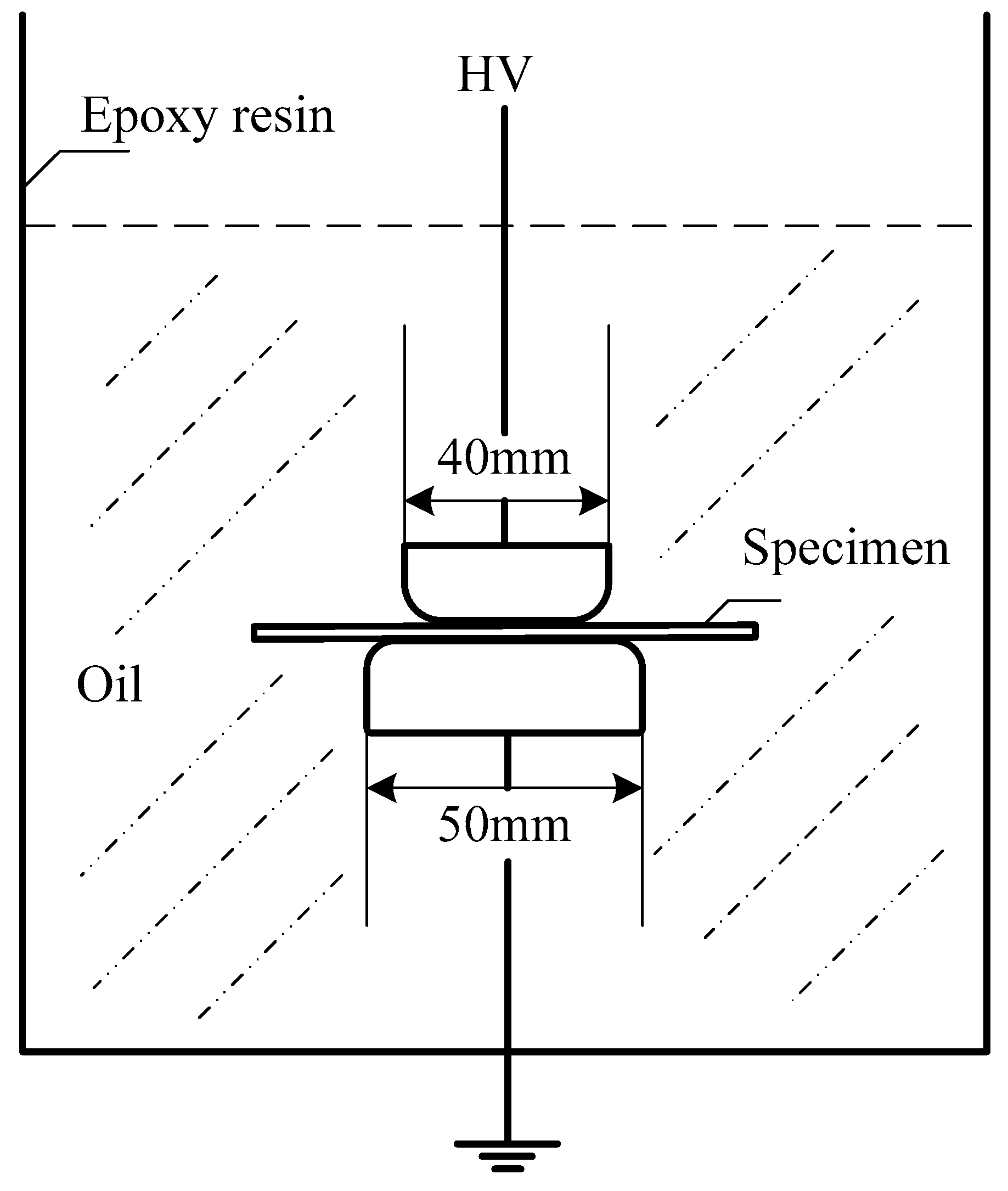 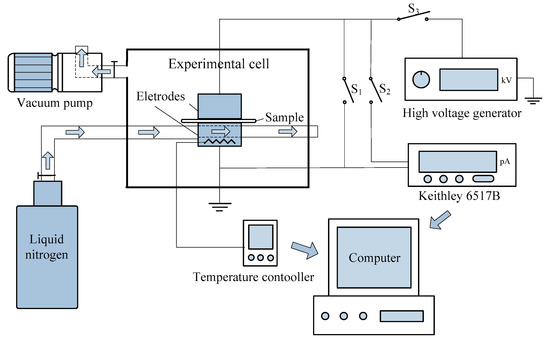 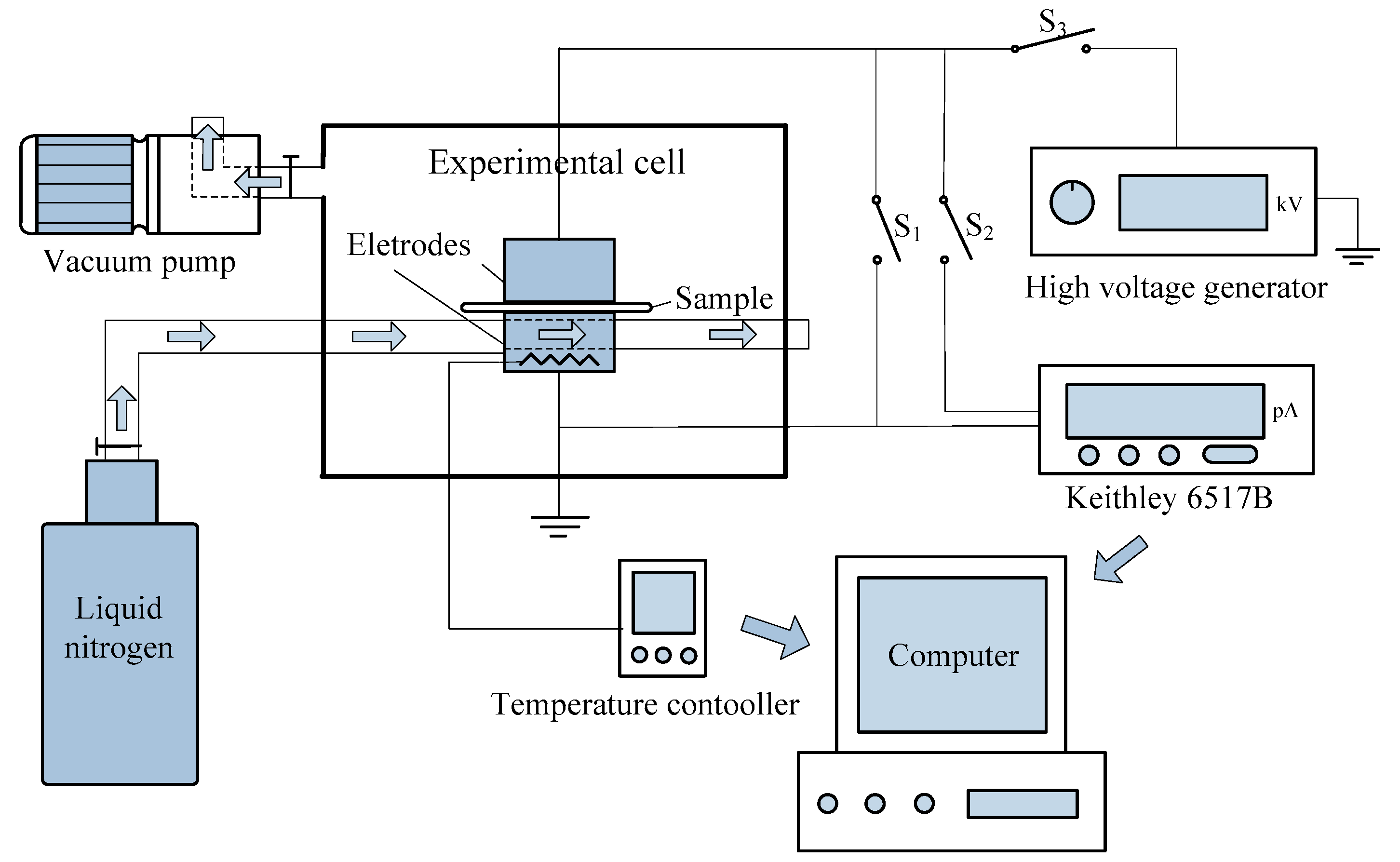 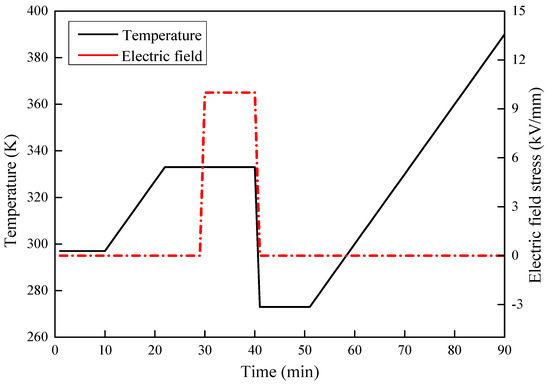 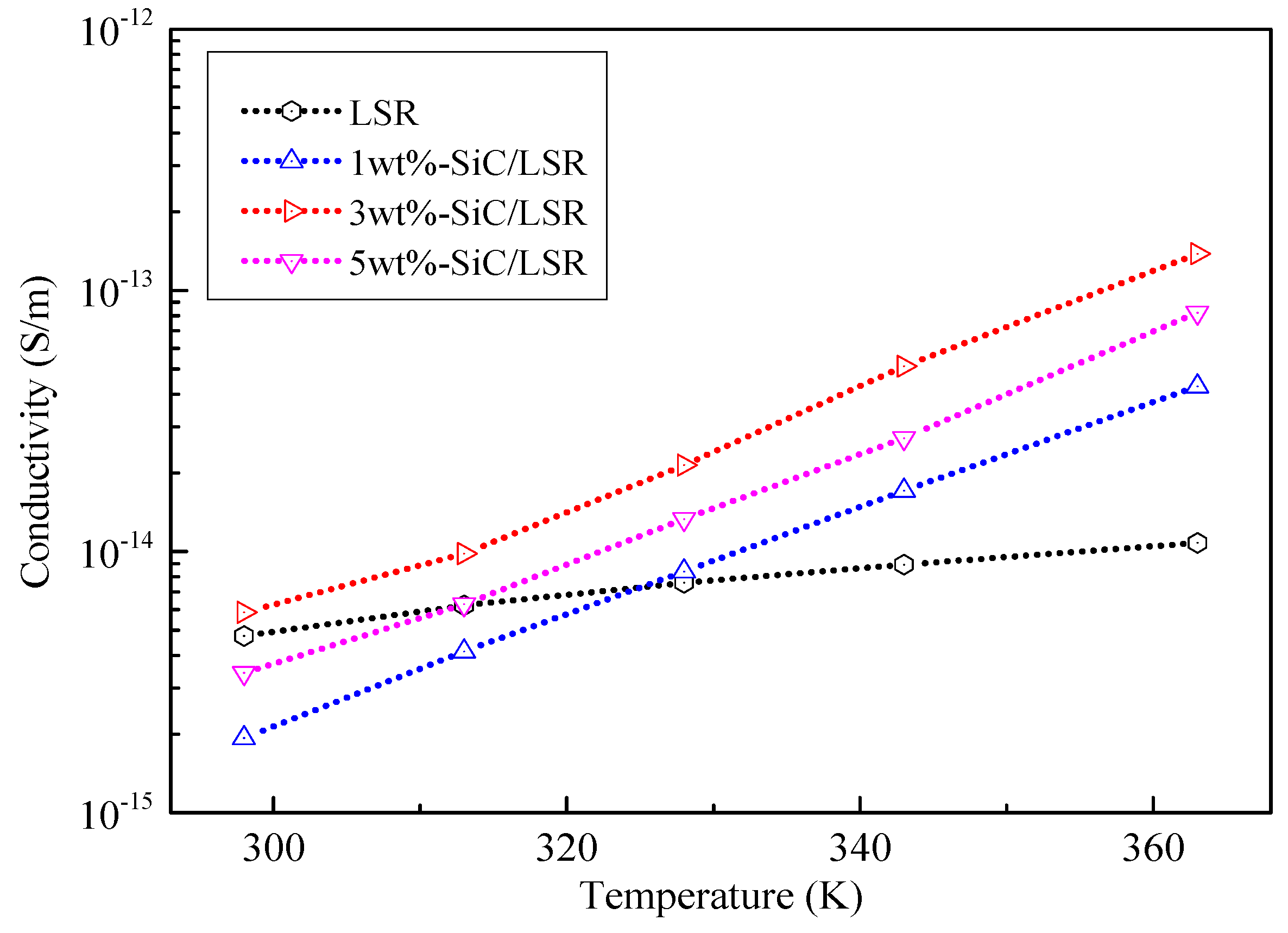 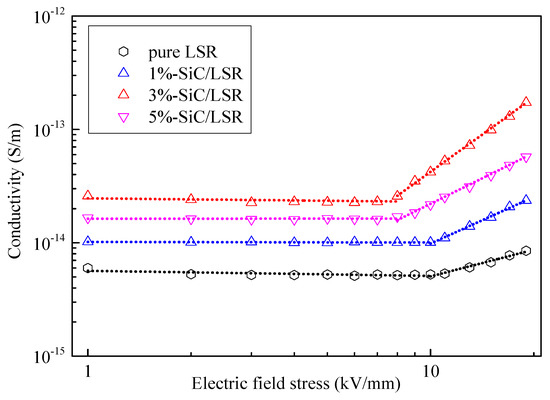 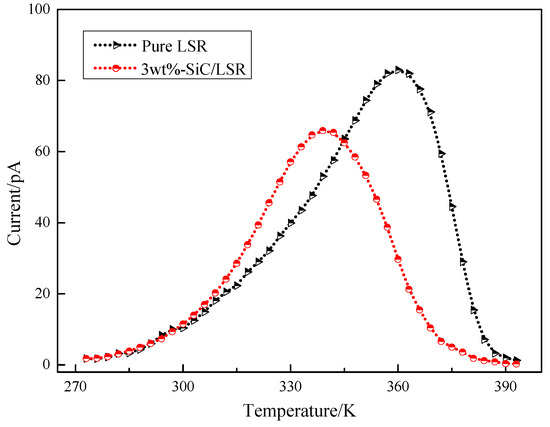