Lectins are a diverse class of carbohydrate binding proteins with pivotal roles in cell communication and signaling in many (patho)physiologic processes in the human body, making them promising targets in drug development, for instance, in cancer or infectious diseases. Other applications of lectins employ their ability to recognize specific glycan epitopes in biosensors and glycan microarrays. While a lot of research has focused on lectin interaction with specific carbohydrates, the interaction potential of lectins with different types of surfaces has not been addressed extensively. Here, we screen the interaction of two specific plant lectins, Concanavalin A and Ulex Europaeus Agglutinin-I with different nanoscopic thin films. As a control, the same experiments were performed with Bovine Serum Albumin, a widely used marker for non-specific protein adsorption. In order to test the preferred type of interaction during adsorption, hydrophobic, hydrophilic and charged polymer films were explored, such as polystyrene, cellulose, N,-N,-N-trimethylchitosan chloride and gold, and characterized in terms of wettability, surface free energy, zeta potential and morphology. Atomic force microscopy images of surfaces after protein adsorption correlated very well with the observed mass of adsorbed protein. Surface plasmon resonance spectroscopy studies revealed low adsorbed amounts and slow kinetics for all of the investigated proteins for hydrophilic surfaces, making those resistant to non-specific interactions. As a consequence, they may serve as favorable supports for biosensors, since the use of blocking agents is not necessary.
Keywords: lectin; bovine serum albumin; adsorption; cellulose thin film; polystyrene; gold; surface plasmon resonance spectroscopy lectin; bovine serum albumin; adsorption; cellulose thin film; polystyrene; gold; surface plasmon resonance spectroscopy

Lectins are a diverse group of carbohydrate binding proteins featuring at least one non-catalytic domain that reversibly binds to specific mono- or oligosaccharides [1]. These sugar binding proteins are commonly classified in terms of their source (i.e., plants, fungi, animals), or carbohydrate specificity (e.g., glucose/mannose, galactose, sialic acid or fucose) [2,3]. Lectins are critical for cell communication and signaling in many physiologic and pathophysiologic processes. The versatile structure of lectins results in a large diversity of properties, reaching from anti-insect, anti-tumor, immunomodulatory, antimicrobial to HIV-I reverse transcriptase inhibitor activities [4]. Many human pathogens (viral, bacterial or protozoan) employ lectins to bind to glycans displayed on the host’s cell surfaces and thus, initiate adhesion and infection. Escherichia coli, for instance, binds to mannosides and the Influenza virus attaches via sialic acid residues on the host’s cell surfaces. Aberrant cell surface glycosylation is a hallmark of tumor cells, and lectin interactions with tumor-specific glycan epitopes can promote tumor growth and immune modulation [5,6]. Therefore, lectins are subject to extensive studies in the fields of infectious diseases and cancer research as potential drug targets or therapeutic agents, as well as diagnostic and prognostic tools [2,7].
Other applications of lectins are their use in structural glycan analysis. The carbohydrate binding affinity of lectins is exploited for the detection of glycans or glycan containing molecules. Lectin microarrays are applied to separate, isolate and identify mono-, oligo- or polysaccharides, glycoproteins and glycolipids. Additionally, lectins are employed in biosensors to analyze lectin-carbohydrate interactions, such as specificity, affinity and kinetics [3]. When it comes to biosensors, protein adsorption is a very critical factor, since non-specific interactions of the protein with the substrate influence sensitivity and selectivity. Therefore, blocking agents are employed to minimize those factors [8].
Many parameters are affecting the adsorption behavior of proteins, among others the nature of the substrates, such as hydrophilicity or hydrophobicity and surface morphology. Therefore, fundamental adsorption studies assist to predict the behavior of proteins in the environment of a certain substrate e.g., used in a biosensor. Despite the countless number of lectin applications, there are only a few studies concerning non-specific adsorption of lectins. For instance, Amim et al. investigated the effect of the use of amino-terminated substrates for cellulose ester films and the concomitant change of surface free energy on the lectin-carbohydrate interaction [9] and Zemla et al. determined the preferred adsorption of lectins on parts of phase separated polymer thin films [10].
In this study, we examine the adsorption behavior of two lectins, Ulex Europaeus Agglutinin-I (UEA-I), a fucose binding lectin that is extracted from common gorse, and Concanavalin A (Con A), a lectin with mannose and glucose specificity extracted from jack bean [11,12]. Their adsorption behavior onto the different surfaces was compared to that of Bovine Serum Albumin (BSA), which is a widely used marker for non-specific protein interaction. The interaction capacity of the proteins with substrates of various kinds, such as hydrophilic, hydrophobic and charged (positively and negatively), was tested in real time by means of multi-parameter surface plasmon resonance spectroscopy (MP-SPR) in order to determine not only the adsorbed amount, but also the adsorption kinetics. The herein presented results give insight into the type of interaction that governs the adsorption behavior of these specific proteins.

The results of this adsorption study can be rationalized in the following way. The adsorption behavior of the examined lectins is comparable to BSA in terms of affinity to substrates of different types. The largest adsorbed amounts and fastest kinetics were observed on the PS surface indicating that hydrophobic effects govern the attraction of the investigated proteins to the substrate, which in turn are mostly driven by entropic contributions. The preferred adsorption onto gold is most likely enhanced by interactions of the thiol groups of the proteins (e.g., methionin for ConA), because of the good interaction capacity of sulfur and gold. The affinity to the hydrophilic substrates was exceptionally low, even when positive charges were introduced by adsorbing TMC. In addition, both types of polysaccharide layers are very prone to swelling (water contents up to 60 wt.%), which impedes protein adsoprtion via entropy since some of the water must be removed from the system in order to accomplish for protein deposition. Although Con A is a mannose/glucose binding lectin, which could interact with the glucose residues from cellulose, no adsorption was detected, probably due to the small number of available end groups of the cellulose.
In conclusion, the binding interactions of BSA, UEA-I and Con A are primarily based on hydrophobic effects, therefore hydrophilic substrates, such as cellulose and TMC, compared to for instance PS, offer huge advantages for the utilization in biosensor development. They are not only stemming from renewable resources, but when used as a support material they are resistant to non-specific protein adsorption thereby avoiding the introduction of blocking agents. As a consequence, they are highly suitable to be used for a variety of lectin-based arrays. Future research will focus on interactions of human milk oligosaccharide with specific lectins immobilized on polysaccharide surfaces, which is an important topic concerning the health of breastfed new-born children. 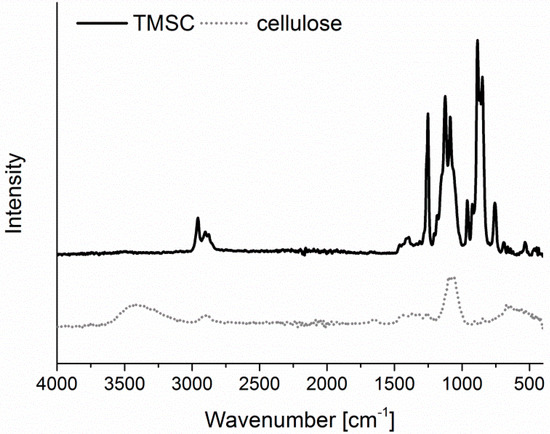 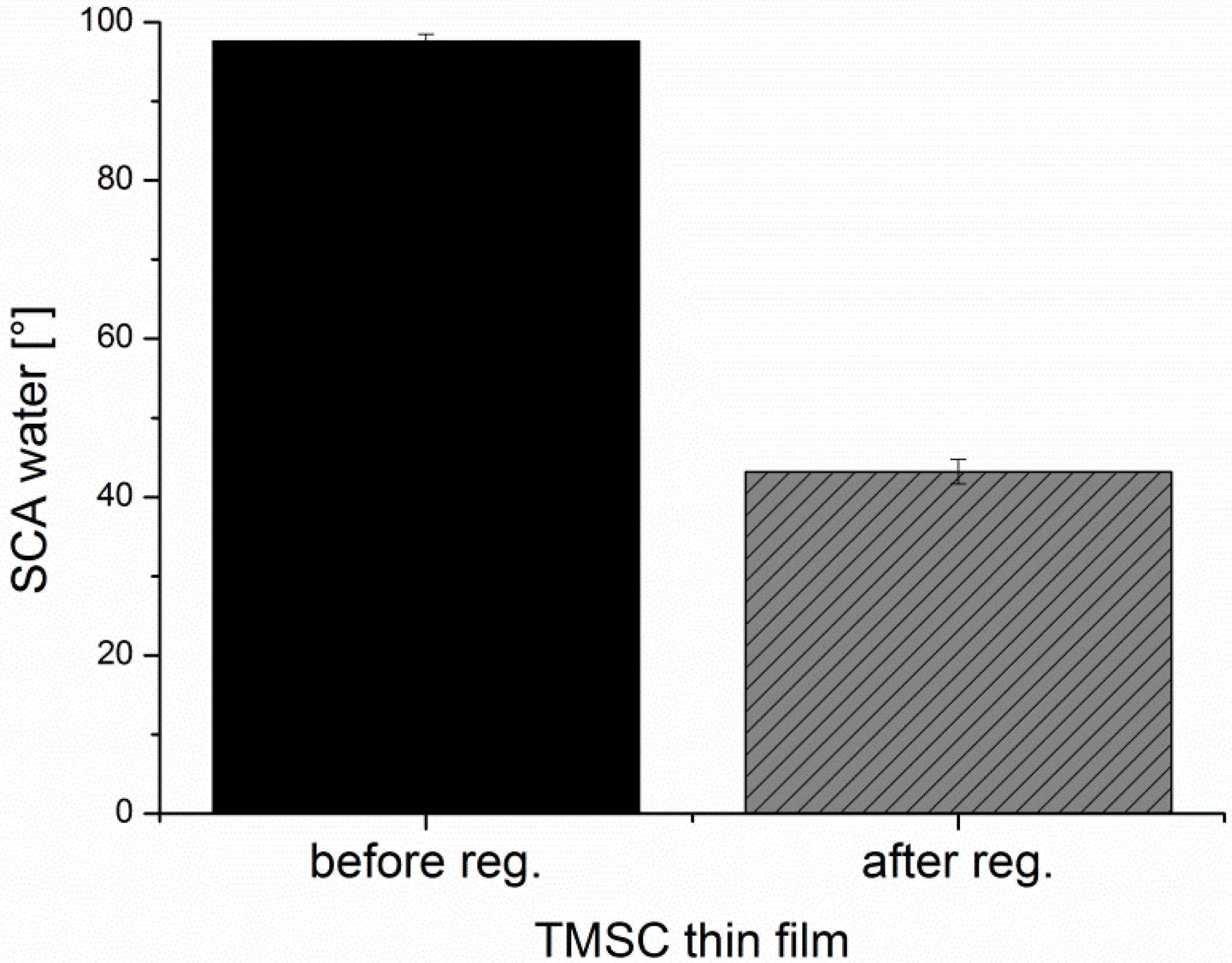 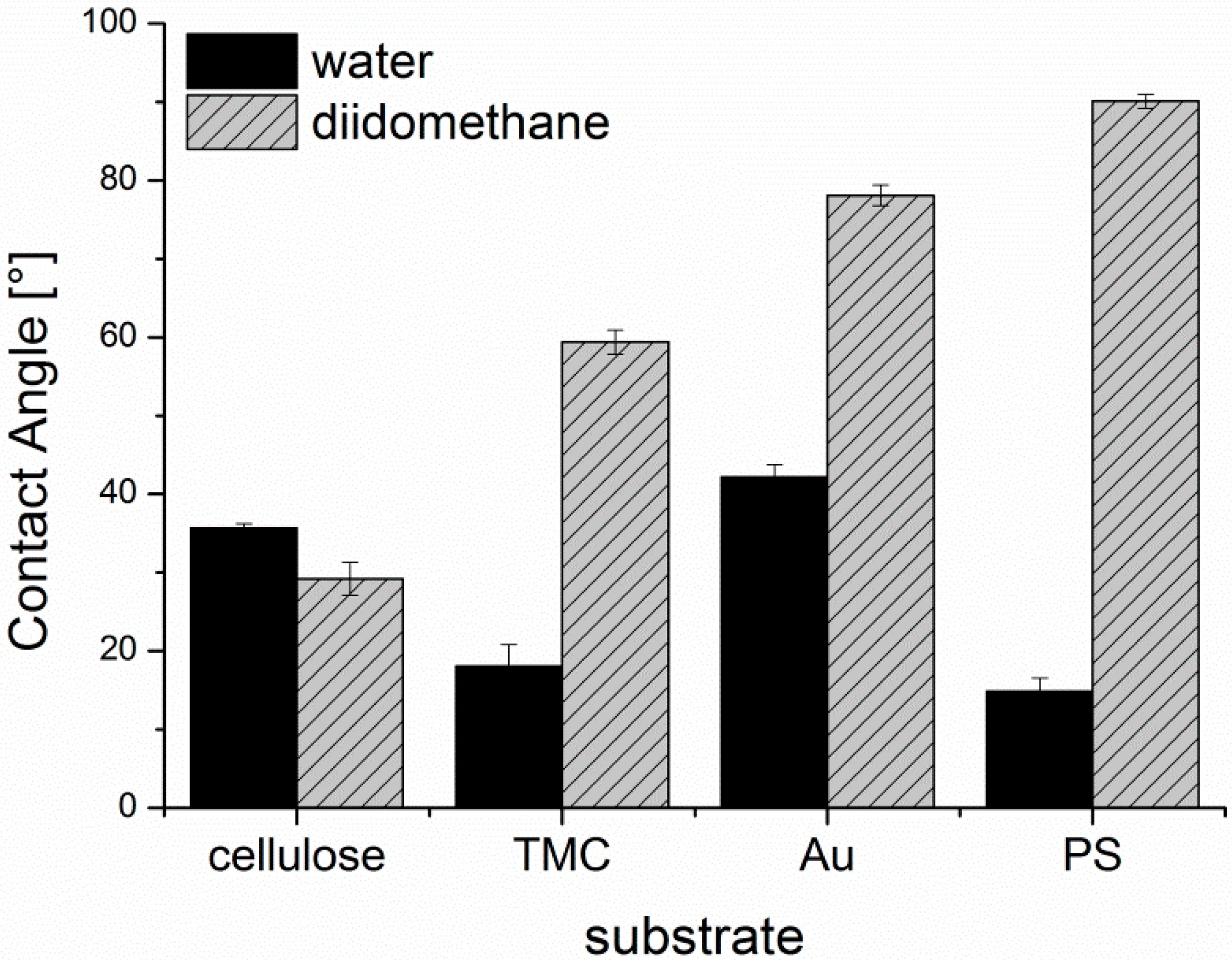 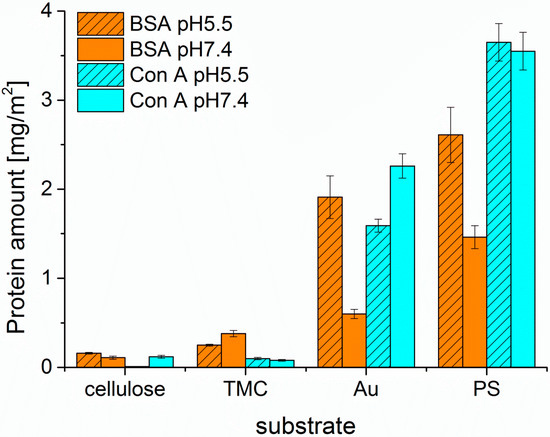 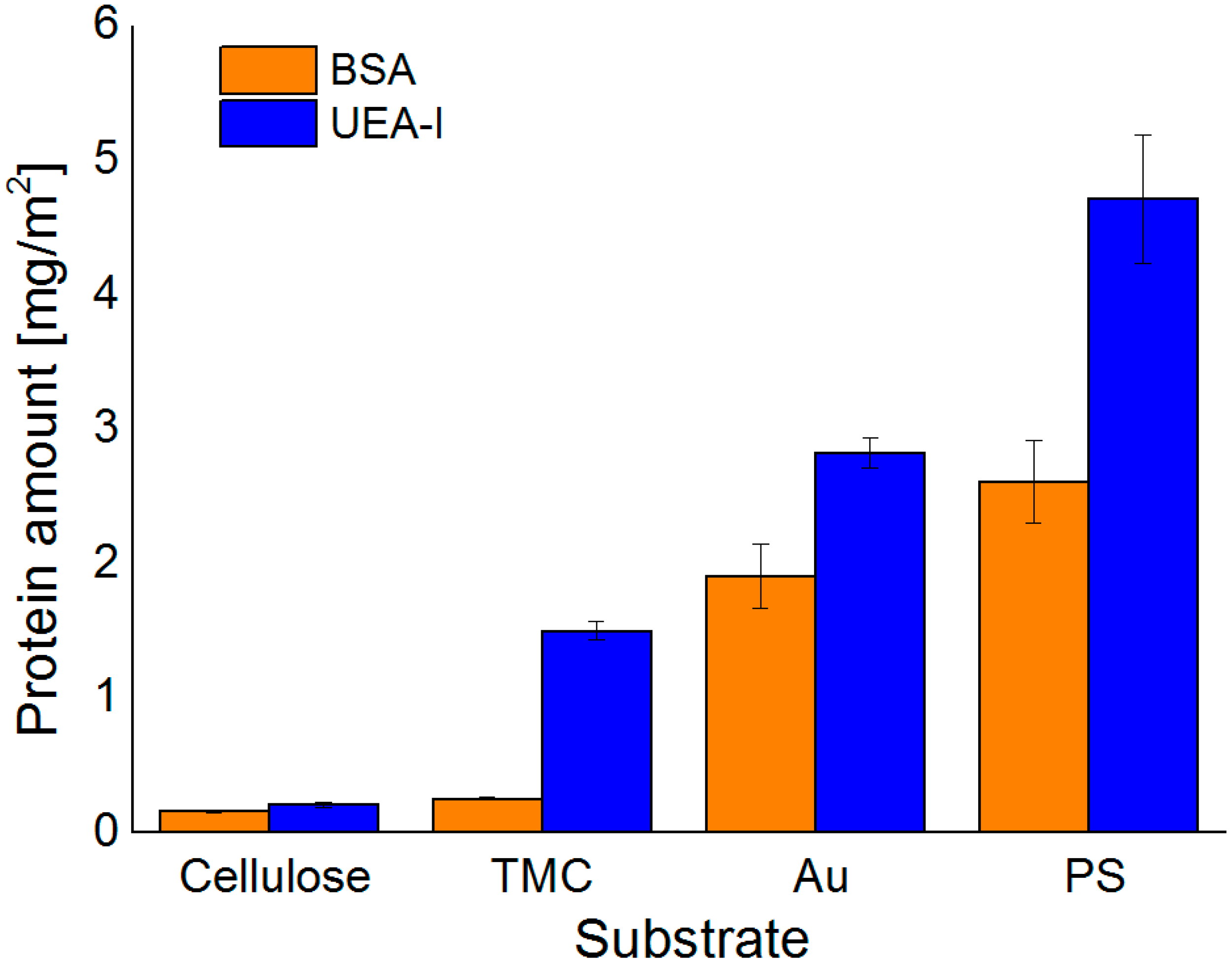 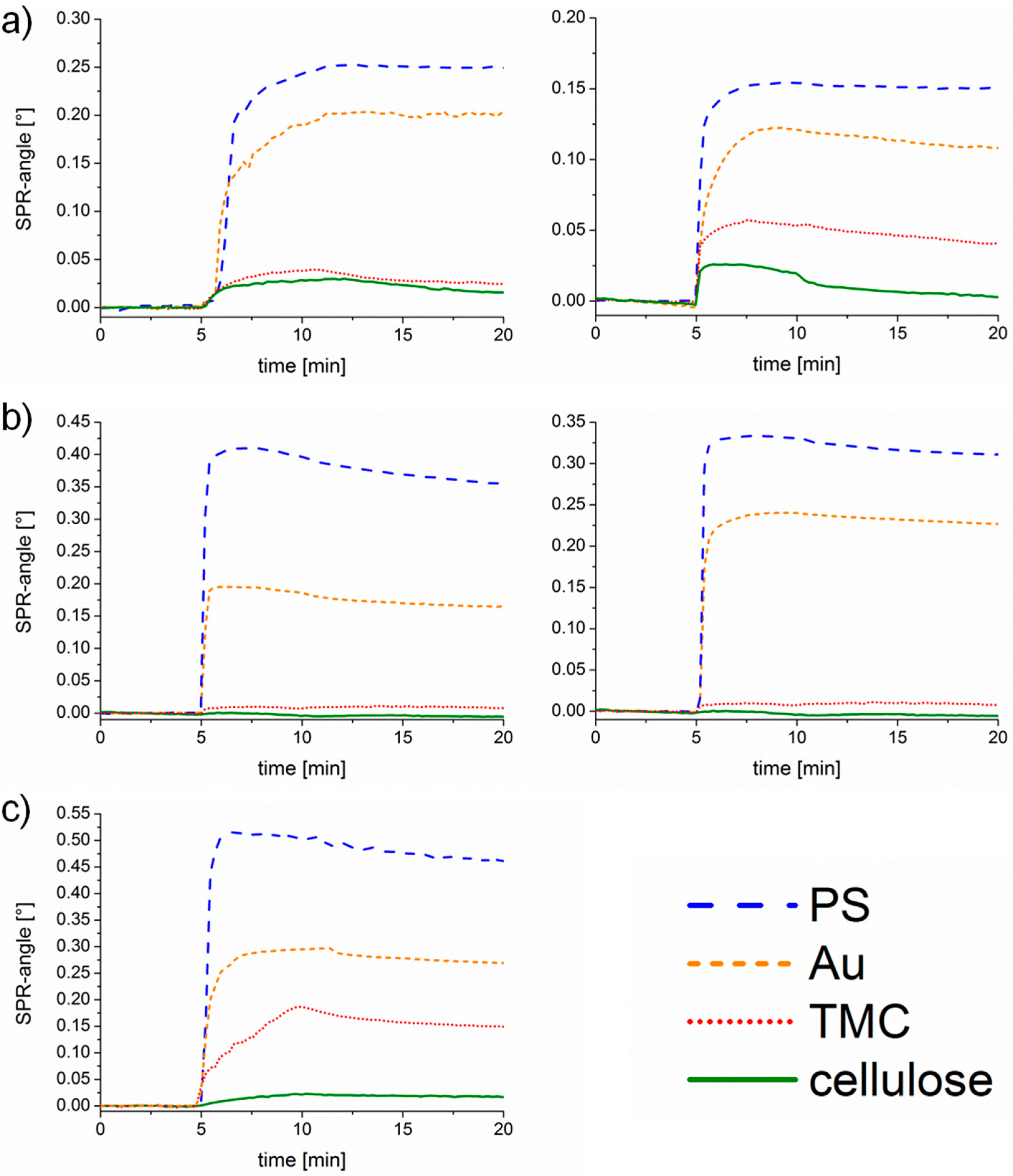 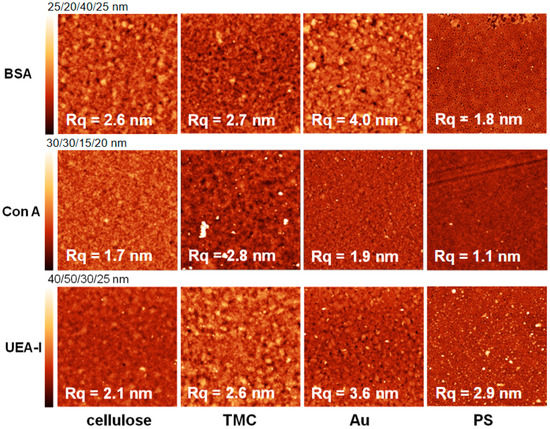 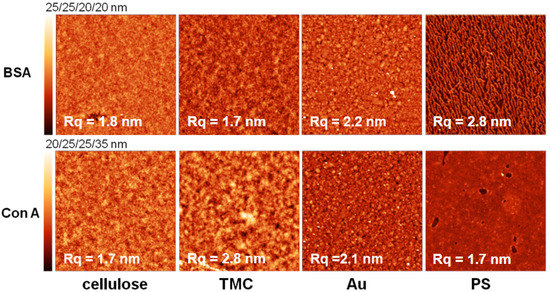