Lectins are a diverse class of carbohydrate binding proteins with pivotal roles in cell communication and signaling in many (patho)physiologic processes in the human body, making them promising targets in drug development, for instance, in cancer or infectious diseases. Other applications of lectins employ their ability to recognize specific glycan epitopes in biosensors and glycan microarrays. While a lot of research has focused on lectin interaction with specific carbohydrates, the interaction potential of lectins with different types of surfaces has not been addressed extensively. Here, we screen the interaction of two specific plant lectins, Concanavalin A and Ulex Europaeus Agglutinin-I with different nanoscopic thin films. As a control, the same experiments were performed with Bovine Serum Albumin, a widely used marker for non-specific protein adsorption. In order to test the preferred type of interaction during adsorption, hydrophobic, hydrophilic and charged polymer films were explored, such as polystyrene, cellulose, N,-N,-N-trimethylchitosan chloride and gold, and characterized in terms of wettability, surface free energy, zeta potential and morphology. Atomic force microscopy images of surfaces after protein adsorption correlated very well with the observed mass of adsorbed protein. Surface plasmon resonance spectroscopy studies revealed low adsorbed amounts and slow kinetics for all of the investigated proteins for hydrophilic surfaces, making those resistant to non-specific interactions. As a consequence, they may serve as favorable supports for biosensors, since the use of blocking agents is not necessary. View Full-Text
Keywords: lectin; bovine serum albumin; adsorption; cellulose thin film; polystyrene; gold; surface plasmon resonance spectroscopy lectin; bovine serum albumin; adsorption; cellulose thin film; polystyrene; gold; surface plasmon resonance spectroscopy
►▼ Show Figures 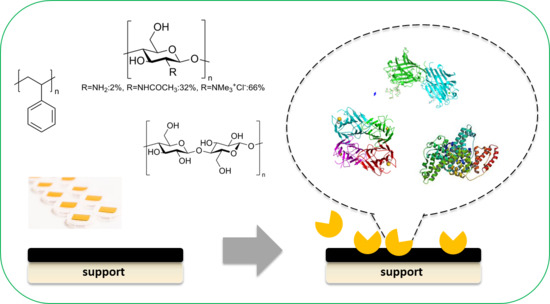