Using pottery clay, porous ceramic stones were molded and then decorated with copper sub-microparticles inside the pores. Copper added antimicrobial functionality to the clay-based ceramic and showed ability in disinfecting water. Populations of both Staphylococcus aureus and Klebsiella pneumoniae in contaminated water were reduced by >99.9% in 3 h when exposed to an antimicrobial stone. This antimicrobial performance is attributed to a slow release of copper into water at both room and elevated temperatures. Copper is leached by water to produce ion concentrations in water at a level of 0.05–0.20 ppm after 24 to 72 h immersion tests. This concentration is reproducible over a number of cycles >400. To our knowledge, this is the first formulation of copper sub-microparticles inside the porous structure of commercial-sized ceramic stones that can disinfect bacteria-contaminated water over a period of at least several months.
Keywords: antimicrobial ceramic; copper; water disinfection antimicrobial ceramic; copper; water disinfection

The spread of diseases is a serious problem for the growing human population. Deaths from acute respiratory infections, diarrheal diseases, measles, AIDS, malaria and tuberculosis accounted for more than 85% of the mortality from infection worldwide [1]. Added to this is the significant global burden of resistant hospital-acquired infections, the emerging problems of antiviral resistance, and the increasing development of drug resistance in the neglected parasitic diseases of poor and marginalized populations [2]. The fight against infectious bacteria and viruses has been broadened in recent years through deployment of antibacterial personal-use products such as sprays, soaps, and tissues. However, only a small fraction of the human population uses antibacterial products due to cost, limited access, or ignorance, and therefore antibacterial sprays, soaps, and tissues cannot solve this ever-growing health problem. Additionally, new antibacterial products promote the development of resistant bacteria.
Futuristic predictions often envision a world in which architecture, facilities, commodities, and products will be engineered with smart surfaces and coatings. Such surfaces will “intelligently” respond to changing environments and/or personal needs. Those surfaces and products that are repeatedly touched in the course of daily activity, as well as those in possible contact with bacteria-contaminated water and food, currently pose a serious health threat by harboring infectious agents. These surfaces will need to be engineered to be inhospitable for bacteria, viruses, fungi, and molds. Most likely, commodities with bacteria-resistant surfaces, engineered through advances in nanotechnology, will be not only used in hospitals to prevent the worldwide spread of so-called “superbugs”, but also in schools, offices, on buses, trains, etc.
Copper and copper compounds have been shown to kill a wide range of microorganisms, including viruses (enveloped and non-enveloped), bacteria (gram positive and negative), fungi, yeast, and even spores [3,4,5,6]. In fact, according to the Copper Development Association (CDA), copper is able to kill 99.9% of harmful bacteria within two h, and to keep killing over 99% of bacteria regardless of repeated exposure to the copper surface. This is true even for antibiotic-resistant bacteria such as Methicillin-resistant S. aureus (MRSA) [7].
The antimicrobial property of copper is achieved through several mechanisms, which work in tandem. These include membrane lipid peroxidation, denaturation of nucleic acids, plasma membrane permeabilization, alteration of proteins, and inhibition of protein biological assembly and activity [8,9]. It is believed that copper damage begins at the microorganisms’ envelope [10,11]. Copper is also capable of interacting with microbial proteins and nucleic acids both on the envelope and within the cell [12,13,14,15]. One major mechanism for these interactions is a cyclic redox reaction between Cu+ and Cu2+, which causes the production of hydroxyl radicals capable of damaging vital components of a microorganism [8,16]. It is this redox reaction which makes copper an effective antimicrobial substance. Additionally, despite being used by human civilization for many centuries, no microorganisms have been found which are completely resistant to copper [17,18,19,20].
Copper, in general, is acknowledged to be safe for humans [21]. Common antimicrobial uses for copper include wound healing [22,23], bacteria control in hospitals [24,25,26], prevention of parasite and algae growth in water reservoirs, and reduction of foodborne diseases [27,28,29]. In recent years, new antimicrobial materials carrying small quantities of copper, typically in the form of nanoparticles or nanodots, have been developed with the purpose of replacing large quantities of copper and its alloys [30,31,32]. Synthesis of copper nanoparticles on natural aluminosilicates such as montmorillonite, kaolinite, palygorskite, clinoptilolite, and others has been broadly demonstrated experimentally as well, and these mineral-copper hybrid materials seem to be a promising alternative to bulk copper-based components [30,32].
The use of treated ceramics for water decontamination has seen some success already. Specifically, the coating or embedding of photocatalysts, such as titanium oxide (TiO2), into ceramic-like material has been used to treat water at an industrial scale [33,34,35]. Such treatments have been shown to be durable, remaining effective over multiple cycles, and capable of clearing pollutants and inactivating harmful bacteria such as E. coli. The use of ceramics and ceramic-like material is also cost-effective, as many of the materials are cheap and plentiful. The studies do suggest, however, that the composition, diameter, and other parameters of the vessel material can have profound effects on the disinfecting qualities of the product. Here, we report the formulation and antimicrobial performance of new clay-based stones. The uniqueness of this invention is in embedding copper sub-microparticles into the internal 3-dimensional structure of a porous clay-based ceramic, taking advantage of the large surface area. This new architecture allows for a release of copper ions into water in small quantities over a long period of time, making this hybrid material antimicrobial and durable. This study, although of exploratory nature, demonstrates that antimicrobial stones work effectively in both cold and warm waters and are perfectly suitable to serve as a sanitizer for small quantities of water, up to 1 gallon per stone, for non-potable applications. Such small quantities of water are typically used in SPA, beauty and horticulture industries as well as for personal hygiene in households. Specifically, the applications of this antimicrobial invention could be explored in treatment of water in SPA massaging studios, nail and pedicure salons, hair dressing parlors, and several others. It could also replace bleaching pills used commonly in toilets.

Pottery clay (Red Earthenware, Minnesota Clay Company, Plymouth, Minnesota, United States of America composed of mainly kaolin (55–80 wt %), silica (25–55 wt %) and talc (5–15 wt %) was used to shape 21 approximately fist-sized stones with diameters of 45–60 mm (Figure 1a). The stones were allowed to sit and dry in atmospheric conditions overnight. The clay stones were then placed in a dryer at 100 °C for 2 days. Dried samples were fired in a furnace at 1000 °C for 2 h. Once cooled, the ceramic samples were then submerged in 1.73 M copper sulfate for 5 days at room temperature. After 5 days, the stones were removed from the solution and washed with tap water, and dried again. Copper ions introduced to ceramics were reduced to metallic copper sub-microparticles in a hydrogen atmosphere at 450 °C for 4 h. After cooling any excess residue was vacuumed and gently wiped from the surface of the samples before further testing.
Thin sections were cut from the ceramic stones using a diamond saw blade and then carbon coated. Scanning electron microscopy (SEM) imaging was done using a JEOL JSM-6400 (JEOL, Peabody, MA, USA) using 20 kV accelerating voltage. Elemental analysis of selected samples was done under SEM using energy dispersive spectroscopy (EDS).
X-ray diffraction (XRD) was performed on ceramic disc sections as well as a powdered form of the original clay using a Scintag XDS2000 powder diffractometer (Scintag Inc., Cupertino, CA, USA). A range of 2.00–70.00° was used with a step of 0.020° and a scan rate of 1.00°/min.
Selected ceramic stones were submerged in tanks containing 3.79 liters and 1.90 liters of tap water at either 20 or 50 °C (±2 °C). Water samples were taken from the tanks approximately every 24 h on the weekdays and 72 h over the weekend. After each sample, the tanks were emptied, and new tap water was added to re-submerge the stones. This continued for 35 days with 24 samples taken, with the stones being submerged in water for approximately 840 h total. In another durability test, stones were used for 4–6 days a week for approximately 48 weeks out of the year. The stones remained in warm water (45–55 °C) for ~6 h a day.
Antimicrobial tests were done on freshly formulated stones after they were pre-washed with water several times to secure uniform release of copper ions. Staphylococcus aureus ATCC 6538 and Klebsiella pneumoniae ATCC 4352 were grown in individual overnight cultures of TSB at 37 °C. The overnight cultures were used to spike test vessels for ASTM E2149-1 testing as indicated. ASTM E2149-1 was used for antimicrobial activity determination with the following modifications. Briefly, 2.835 liters of sterile, distilled deionized water was placed within a 5 liter Erlenmeyer flask, sealed with foil and incubated overnight at 49 °C to prewarm the testing solution to levels that are seen in massage clinics that use prewarmed stones for massage. One sterile stone was placed in each flask and 50 milliliters of overnight culture was added to each test flak in quintuplicate. There was one control flask and stone per organism type. The starting concentrations of viable organism per flask was determined to be 6.83 Log for Staphylococcus aureus and 5.60 Log for Klebsiella pneumoiae via heterotrophic plate count at the 0 h time point. Flasks were shaken as per ASTM E2149-1 and one milliliter samples were removed from the flasks at 0, 1, 3, 5 and 24 h post inoculation and plated on Tryptic Soy Agar, incubated for 24–48 h at 37 °C and enumerated. Calculation of log kill was performed using the following formula:
Log Reduction = log10 (N/T),
where N is the number of viable organisms in the control group (without copper) at time point x, and T is the number of viable organisms in the treatment group (exposed to active-containing product) at time point x.

A novel antimicrobial stone was formulated, characterized and tested in this study. Clay-based porous ceramic was functionalized with copper sub-microparticles through a copper ion adsorption and exchange processes and reduction of ionic copper to metallic copper using hydrogen. The stone had a gradient distribution of copper sub-microparticles, with the highest copper content in the stone surface region (~7 wt %) and <1 wt % in the internal structure at a depth of ~5 mm. Water leached copper from stones in quantities of 0.05–0.20 mg/L in tests with 1.9–3.8 L water and immersion times of 24 to 72 h. A year-long test demonstrated long-term durability of stones expressed through uniform and consistent release of copper to water. Copper content remained at 0.05–0.20 mg/L in ~4 L water after 6 h immersion over >400 cycles. These small quantities of released copper make the stone a powerful disinfectant of bacteria-contaminated water. This novel antimicrobial ceramic demonstrated a 1.5 Log kill of Staphylococcus aureus and 1.3 Log kill of Klebsiella pneumoniae at 1 h (95–97% reduction) and an almost complete kill of both organisms (>99.9%) at 3 h of contact time. A 6.83 Log kill of Staphylococcus aureus and 4.18 Log kill of Klebsiella pneumoniae was achieved at 5 h (>99.99% reduction).
These results suggest copper-infused ceramic to be a promising antibacterial product for water disinfection, and potentially other future commercial and domestic applications. 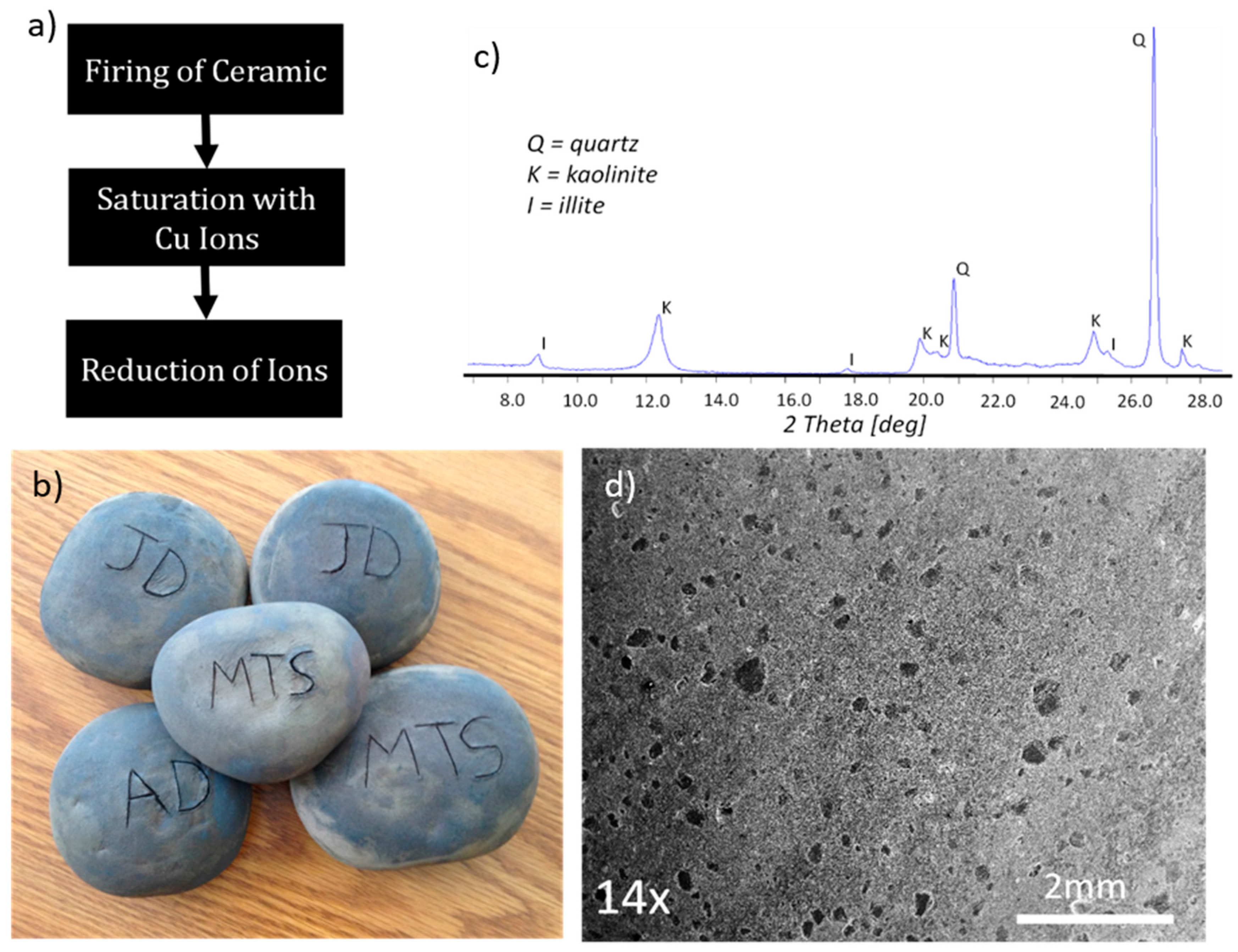 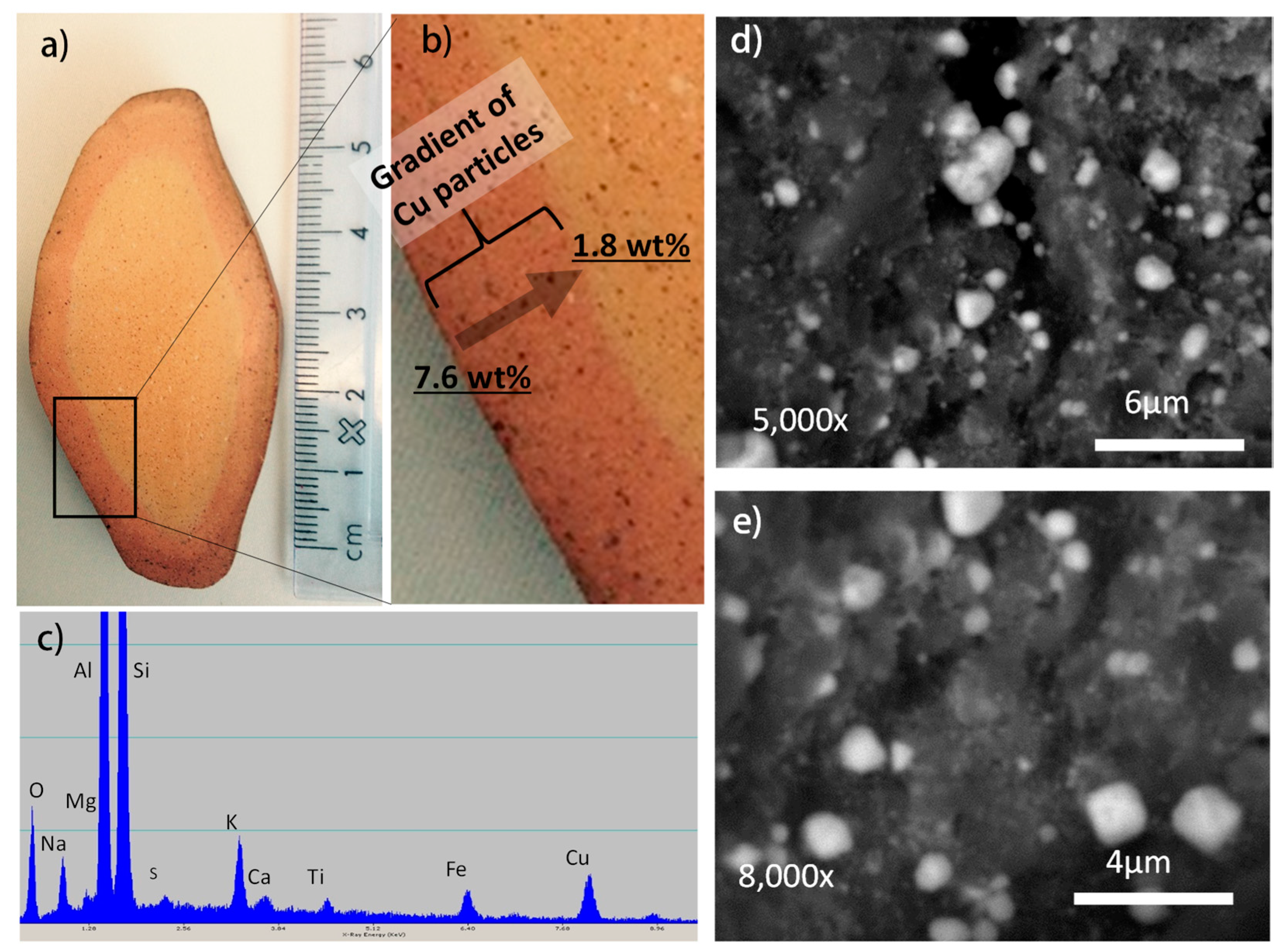 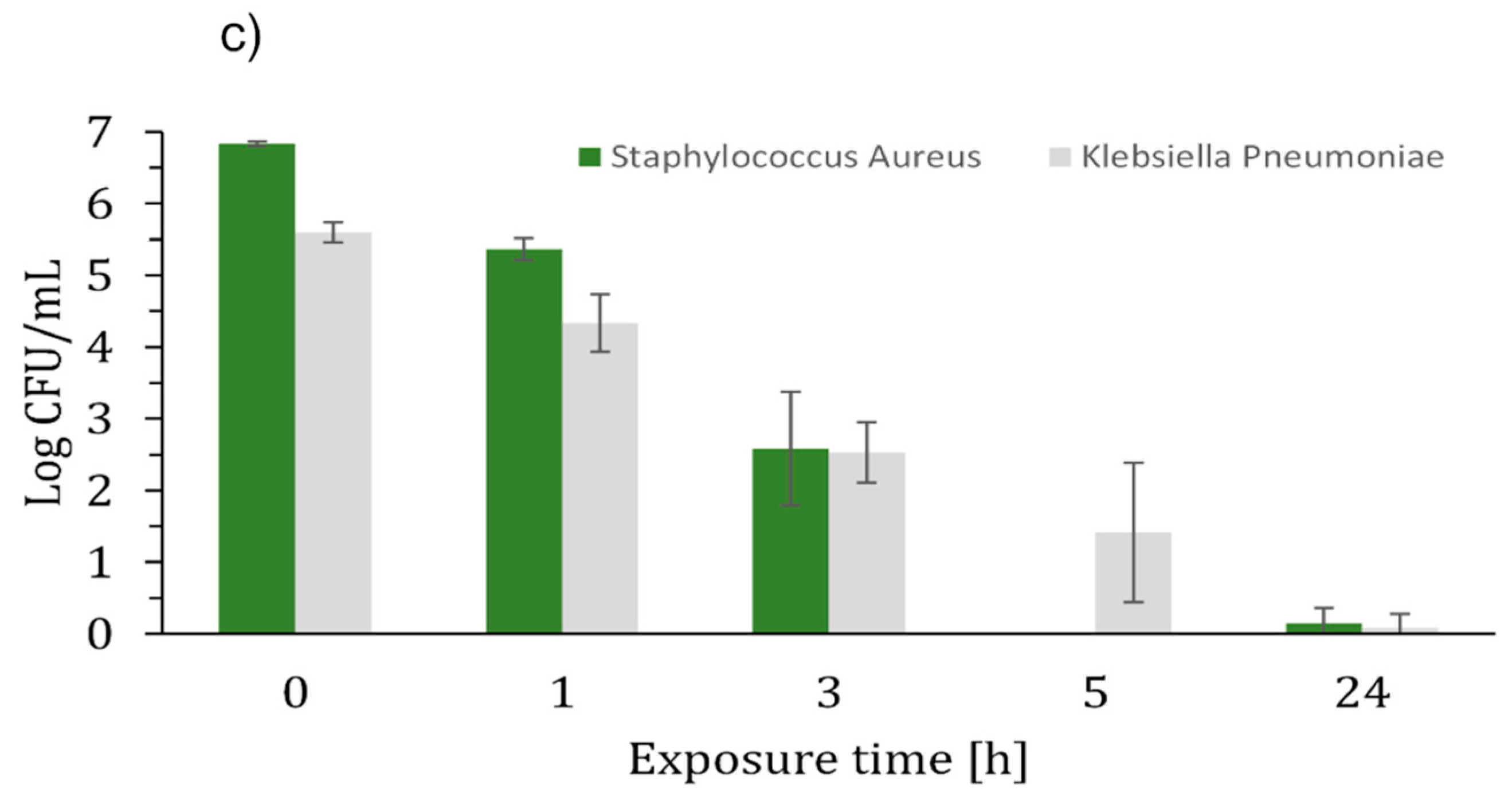