The kinematic behavior of models that are based on the finite element method (FEM) for modeling the human body depends greatly on an accurate estimate of the parameters that define such models. This task is complex, and any small difference between the actual biomaterial model and the simulation model based on FEM can be amplified enormously in the presence of nonlinearities. The current paper attempts to demonstrate how a combination of the FEM and the MRS methods with desirability functions can be used to obtain the material parameters that are most appropriate for use in defining the behavior of Finite Element (FE) models of the healthy human lumbar intervertebral disc (IVD). The FE model parameters were adjusted on the basis of experimental data from selected standard tests (compression, flexion, extension, shear, lateral bending, and torsion) and were developed as follows: First, three-dimensional parameterized FE models were generated on the basis of the mentioned standard tests. Then, 11 parameters were selected to define the proposed parameterized FE models. For each of the standard tests, regression models were generated using MRS to model the six stiffness and nine bulges of the healthy IVD models that were created by changing the parameters of the FE models. The optimal combination of the 11 parameters was based on three different adjustment criteria. The latter, in turn, were based on the combination of stiffness and bulges that were obtained from the standard test FE simulations. The first adjustment criteria considered stiffness and bulges to be equally important in the adjustment of FE model parameters. The second adjustment criteria considered stiffness as most important, whereas the third considered the bulges to be most important. The proposed adjustment methods were applied to a medium-sized human IVD that corresponded to the L3–L4 lumbar level with standard dimensions of width = 50 mm, depth = 35 mm, and height = 10 mm. Agreement between the kinematic behavior that was obtained with the optimized parameters and that obtained from the literature demonstrated that the proposed method is a powerful tool with which to adjust healthy IVD FE models when there are many parameters, stiffnesses, and bulges to which the models must adjust. View Full-Text
Keywords: Finite Elements Method; Multi Response Surface; optimization; biomechanics; human intervertebral lumbar disc Finite Elements Method; Multi Response Surface; optimization; biomechanics; human intervertebral lumbar disc
►▼ Show Figures 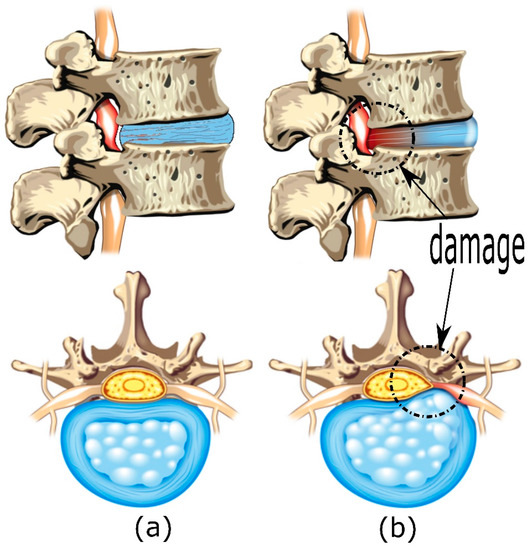