Roy A. Walters 2 and

We apply a three-dimensional hydrodynamic model to consider the potential effects of energy extraction by an array of tidal turbines on the ambient near-bed velocity field and local bed shear stress in a coastal channel with strong tidal currents. Local bed shear stress plays a key role in local sediment dynamics. The model solves the Reynold-averaged Navier-Stokes (RANS) equations on an unstructured mesh using mixed finite element and finite volume techniques. Tidal turbines are represented through an additional form drag in the momentum balance equation, with the thrust imparted and power generated by the turbines being velocity dependent with appropriate cut-in and cut-out velocities. Arrays of 1, 4 and 57 tidal turbines, each of 1.5 MW capacity, were simulated. Effects due to a single turbine and an array of four turbines were negligible. The main effect of the array of 57 turbines was to cause a shift in position of the jet through the tidal channel, as the flow was diverted around the tidal array. The net effect of this shift was to increase near-bed velocities and bed shear stress along the northern perimeter of the array by up to 0.8 m·s−1 and 5 Pa respectively. Within the array and directly downstream, near-bed velocities and bed shear stress were reduced by similar amounts. Changes of this magnitude have the potential to modify the known sand and shell banks in the region. Continued monitoring of the sediment distributions in the region will provide a valuable dataset on the impacts of tidal energy extraction on local sediment dynamics. Finally, the mean power generated per turbine is shown to decrease as the turbine array increased in size. View Full-Text
Keywords: tidal turbines; tidal energy; hydrodynamic model; bed shear stress; Pentland Firth; Inner Sound tidal turbines; tidal energy; hydrodynamic model; bed shear stress; Pentland Firth; Inner Sound
►▼ Show Figures 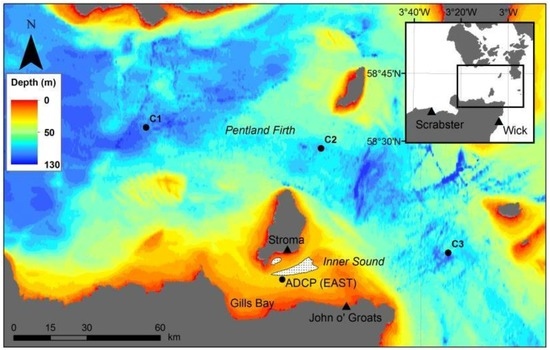 
Gillibrand, Philip A.; Walters, Roy A.; McIlvenny, Jason. 2016. "Numerical Simulations of the Effects of a Tidal Turbine Array on Near-Bed Velocity and Local Bed Shear Stress." Energies 9, no. 10: 852.