We estimate the contamination risks from the atmospheric dispersion of radionuclides released by severe nuclear power plant accidents using the ECHAM/Modular Earth Submodel System (MESSy) atmospheric chemistry (EMAC) atmospheric chemistry-general circulation model at high resolution (50 km). We present an overview of global risks and also a case study of nuclear power plants that are currently under construction, planned and proposed in the Eastern Mediterranean and Middle East, a region prone to earthquakes. We implemented continuous emissions from each location, making the simplifying assumption that all potential accidents release the same amount of radioactivity. We simulated atmospheric transport and decay, focusing on 137Cs and 131I as proxies for particulate and gaseous radionuclides, respectively. We present risk maps for potential surface layer concentrations, deposition and doses to humans from the inhalation exposure of 131I. The estimated risks exhibit seasonal variability, with the highest surface level concentrations of gaseous radionuclides in the Northern Hemisphere during winter. View Full-Text
Keywords: nuclear power plant accidents; radioactivity transport modeling; deposition and inhalation risks nuclear power plant accidents; radioactivity transport modeling; deposition and inhalation risks
►▼ Show Figures 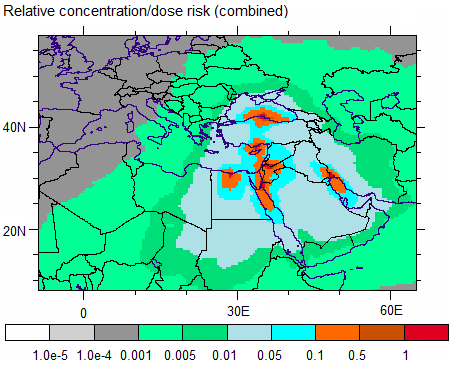