:
Metal halide perovskite solar cells (PSCs) are considered an effectual way to enhance photovoltaic (PV) properties, leading to low-cost and high efficiency. PSCs have experienced rapid improvement in the last ten years. The device’s energy production increases extensively in the presence of concentrated light. The use of concentrated optics in solar cells has spurred the PV industry towards tremendous research. Incorporating the concentrated optic into the PV system as a concentrated PV (CPV) means it can capture light effectively and operate at increased efficiencies under concentrated irradiance. This work addresses an initial assessment of the power conversion efficiency (PCE) enhancement of the ambient PSCs by externally integrating concentrated optics. Significantly, the concentrated optics exhibit ~90% of the PCE enhancement under the solar irradiance of 400 W/m2, whereas 16% of the PCE increase was observed when the solar irradiance changed to 1000 W/m2. During optics integration, a considerable elevation of short-circuit current predominately facilitated the overall efficiency enhancement of the PSC. A systematic PV parameters effect on the optic integration on PSCs was further scrutinized. Therefore, this work signifies a possible way to alleviate the PCE of carbon-based PSC using concentrated optics. This work focuses on integrating CPVs into PSCs, preventing PSC stability and scalability issues, with light conditioning techniques.
Keywords:
perovskite solar cell; cross-compound parabolic concentrator (CCPC); concentrated light; optical and electrical characterization

PSC fabrication methods are restricted due to the strict requirement of controlled environmental conditions for perovskite stability during processing, i.e., a glove box. Therefore, we adopted the device structure through a solution-process route, which can effectively fabricate and perform ambient conditions. The PSCs were manufactured using a solution-processed route at the ambient condition with a back carbon electrode, as mentioned in our previous work [19,20,21], employing TiO2 as an electron transporting layer, Al2O3 as a hole conductive layer, followed by the CH3NH3PbI3 perovskite injection, as shown in Figure 1a. In addition, a schematic of the device’s layers energy band alignment was proposed, as shown in Figure 1b.
The use of the CPV system for BIPV application and power generation remains a trending topic for researchers. The compound parabolic concept has been utilized in a handful of studies for solar energy applications [22,23,24,25]. In this study, the concentrator system was fabricated by utilizing a concentrated optic on the top of PSC and assembling it using ultra-violet (UV) curable adhesive. The concentrated unit was placed on the PSC base with Sylgard 184 adhesive. After alignment, the concentrator unit was placed under a UV lamp at low power to cure. The alignment procedure was crucial, and precautions were needed to avoid misalignment. Afterwards, the cured concentrator unit was removed from UV lamp treatment and was ready to study. Figure 2a (top view) and Figure 2b (side view) show the CCPCs photograph and CCPC placement on PSC, expressly indicating greater optical device transparencies. Figure 2c presents the schematic representation of a CCPC optic where the incident light is concentrated via total internal reflection.

CCPCs, which are made of glass with a transmissivity of over 95% for the visible range, are widely used for LCPV application. The CCPC has a concentration ratio of 2.4×, allowing the system to be static. As a result, a large part of the diffuse solar radiation is collected in the solar cell and all the direct solar radiation incident to the device’s aperture. The PSC was developed at room temperature using carbon as a counter electrode. The integrated device under testing is shown in Figure 3. This combines an AAA+ WACOM solar simulator (WACOM ELECTRIC CO., LTD., Saitama, Japan) and a continuous high-speed measuring unit, as shown in Figure 3. An EKO MP-160i I-V Tracer (EKO Instruments Europe B.V., Lulofsstraat, Netherlands) was used to record PV characteristics. The testing of the fabricated PSC device was carried out for each case.
The PSC device’s detailed structure, integrated with the CCPC optics, is shown in Figure 2a. Figure 2b,c show the CCPC integrated device’s photograph, which expressly indicates greater optical device transparencies. The measurements were performed for the various solar radiation intensity ranges with a room temperature of 20 °C. The optical measurements were carried out using a PerkinElmer Lambda 1050+ UV/Vis/NIR spectrophotometer (Shimadzu UK Limited, Buckinghamshire, UK) for the wavelength range of 175 nm to 3300 nm. A Bentham PVE300 Photovoltaic EQE (IPCE) (BENTHAM, Reading, UK), under 300–1100 nm, was used to measure incident photon-to-current conversion. The experimental set up under the simulator is shown in Figure 3. The variation of solar irradiance was performed, starting at 1000 W/m2 and then reduced to 800 W/m2, 600 W/m2, and 400 W/m2. The active device area was 1 cm2, and the room temperature was 22 °C throughout the experiment.

This work introduces a new set of perovskite solar cell (PSC) devices with CCPC optics for increased efficiency and substantial stability under different solar irradiance. Optical and electrical performances of PSC have been executed with and without CCPC under different sun intensity. We found that the device’s short circuit current density tended to increase linearly with solar irradiance. The open-circuit voltage of the device coupled with CCPC also increased fractionally with increasing solar intensity level.
CCPC inclusion under 400 W/cm2 boosted the efficiency to ~90%, whereas, under 1000 W/cm2, efficiency enhancement was found to be ~16% compared to PSCs without CCPC. This result further generates a deep interest in indoor photovoltaics. The observed efficiency was retained long-term for up to 70 min for both systems. However, substantial deterioration in fill factor was observed, which affected the PCE of the device.
We conclude that device and material stability under increased solar irradiance needs to be considered to implement perovskite with concentrated optics. Furthermore, there is clear room for improvement by controlling layer deposition steps. Some gaps need to be addressed concerning CCPC integration issues, including PSC active area and PSC device dead area. The results put forward the idea of CPV integration with PSC as an effective way to improve PV device efficiency. Fabrication of CCPC optics is low-cost, straightforward, and economically feasible for the commercial market.
Furthermore, CPV emplacement reduces PV materials cost and fabrication complexation by redirecting the incident light towards the smaller PV. In this way, we can minimise fabrication and material cost for the PSCs and further shrink the economic cost of installing large-area PSCs. Because of their high efficiency in a much shorter time, PSC technology will be an effective means for energy production in the coming years if the stability issue can be resolved.

T.K.M. and S.S. conceived of the presented idea and planned the experiments. S.B. and A.R. fabricated the perovskite solar cells. Professor T.K.M. encouraged M.K. to investigate the PSC system by integrating a cross-compound parabolic optic unit and supervised the findings of this work. M.K. carried out the optical part of the experiments. A.R. was involved in planning experimental work and supervised the work. All authors provided critical feedback and helped shape the research, analysis, and manuscript. All authors have read and agreed to the published version of the manuscript.

The funding from Engineering and Physical Science Research Council through EUED Tech 2019 project (EP/S030786/1) is acknowledged.

Ethical review and approval are not applicable for this study due to the reasons that the studies do not involving humans or animals. 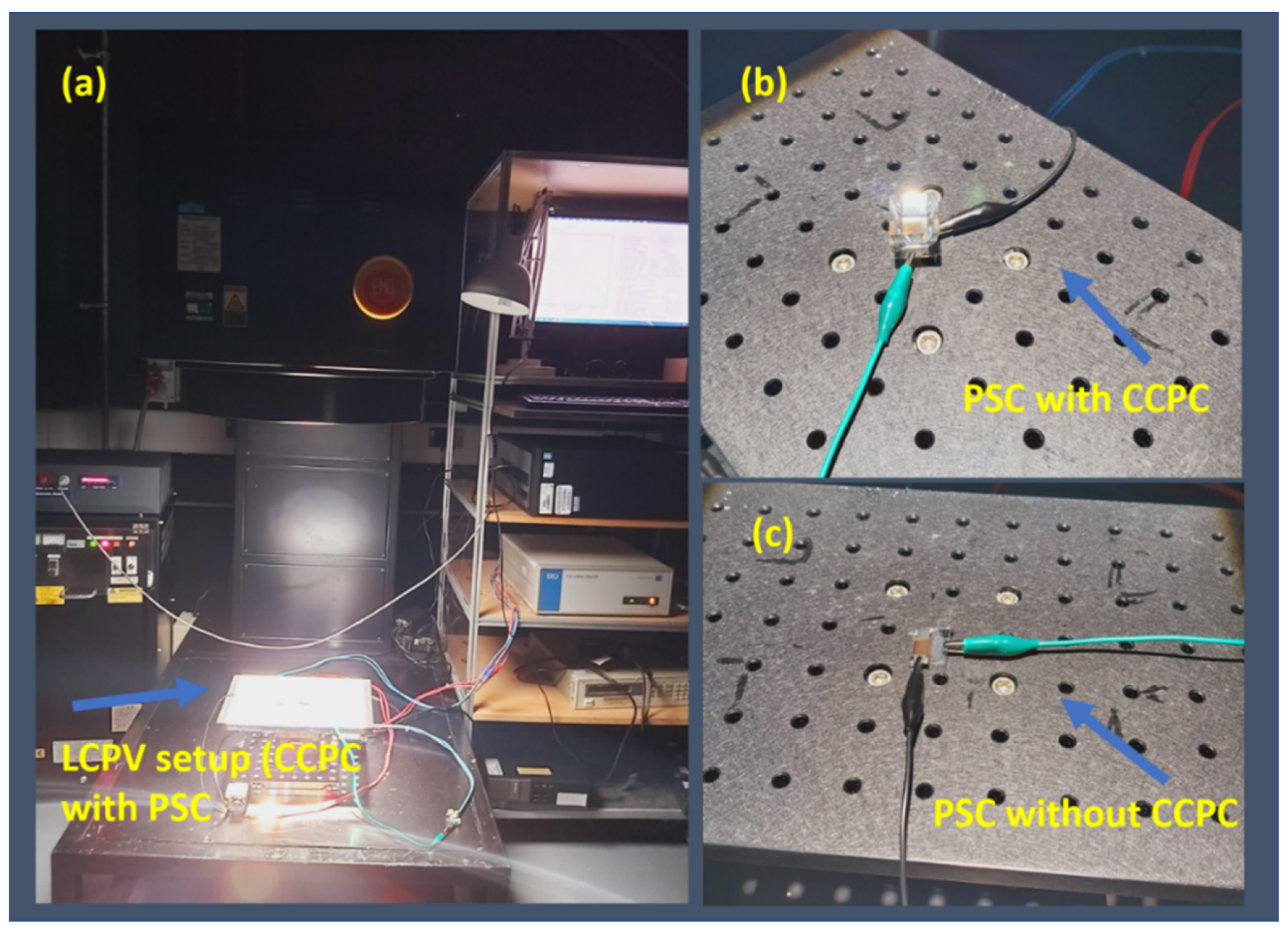 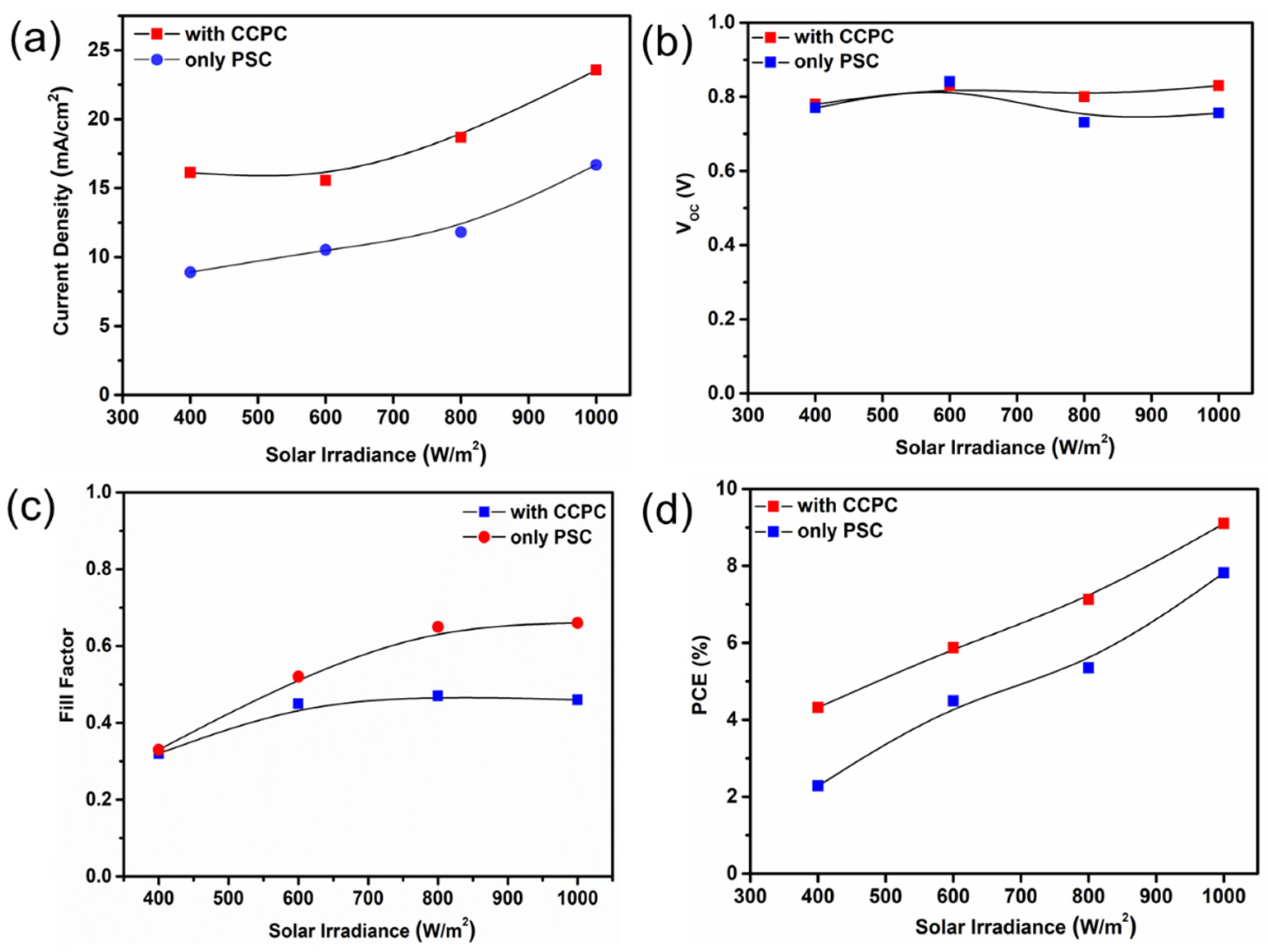