The article presents issues related to the assessment of concentrations of harmful substances in the exhaust gas cloud behind the vehicle. In the theoretical part, considerations about the harmfulness of exhaust gases and methods of detection of chemical compounds were made, and the issues of von Karman vortices and the Lambert-Beer law were referred to. The test object was a vehicle equipped with an SI engine meeting the Euro 3 standard. The drive unit had a capacity of 2.8 dm3, a rated power reaching 142 kW at 5500 rpm and a maximum torque of 280 Nm at 3500 rpm. The measurements of the dilution of the exhaust gas cloud behind the vehicle were made in stationary conditions (laboratory) and during actual operation in the Poznań agglomeration. In the research, technically advanced equipment from the PEMS group was used. In the analysis of the obtained results, detailed considerations were made regarding the influence of the location of the measuring probe in relation to the exhaust system. As can be seen from the obtained dependencies, the vehicle motion is favorable for the assessment of concentrations behind a moving object, because the ecological indicators at successive distances behind the exhaust system achieve better parameters in most points than in a stationary test.
Keywords: remote sensing system; car emission; teledetection; combustion engines remote sensing system; car emission; teledetection; combustion engines

The optical measurement method is based on the rules of optics and consists of comparing the intensity of the light beam passing through the tested medium with the intensity of the light beam that was sent through the reference gas (Figure 1). The exhaust emissions concentration is measured as the decrease in gas transparency caused by the effects of absorption and dispersion. The accuracy of the measurement depends on the optical properties, chemical composition and particle size. An example of such an optical measurement method is the NDIR method in which infrared light is used and the NDUV where ultraviolet light is used.
In research with the use of optical measurement methods, the laws related to absorbance (the ability to absorb radiation) are used. Beer’s law states that the amount of light absorbance of a solution is directly proportional to the concentration of the light absorbing substance (Figure 2). The Lambert-Beer (Beer-Lambert-Bouguer) law describes the absorption of electromagnetic radiation when passing through a partially absorbing and scattering medium [21].
The Lambert-Beer law states that the degree of attenuation (taking into account absorption and scattering) of light is proportional to the thickness of the layer and its optical properties. For solutions, the molar concentration of the absorbing substance should be taken into account. The law is true for both monochromatic and collimated light beams. It is also used in the situation of narrow band ranges, especially if the spectral dependence of attenuation is not strong in this band. The recorded intensity I0 is also the intensity of monochromatic and collimated light. The final value of the radiation intensity I1 is lower than I0 by the value of the radiation absorption intensity. This law can be expressed mathematically in several different ways [21]. where:
A vehicle in motion is subject to forces associated with the drive train system, tire friction and aerodynamic drag. Movement causes air molecules to pile up as they approach the vehicle’s face. As a result, there is a local increase in pressure. At the same time, the pressure in the streams flowing around the car body is close to the atmospheric pressure. This causes the air to move towards the area of lower pressure, trying to achieve equilibrium. As a result of the continuous movement of the vehicle and the accumulation of particles, air flows are formed around the vehicle body, while a sphere with properties similar to a vacuum is created directly behind it. This is directly related to the speed with which the vehicle is moving. When driving at a high speed, air particles are not able to fill the space that is directly behind the vehicle quickly enough. Rapid pressure change and the inertia of air molecules affect the occurrence of the phenomenon of flow separation known from aviation. It occurs when the boundary layer moves so far away from the pressure gradient that its velocity is almost zero compared to that of the moving vehicle. This separation makes the flow turbulent and its path chaotic [22]. Figure 3 shows an example of simulation performed in ANSYS showing a method for forming a turbulent flow zone for the moving vehicle.
In the case of a flow around a vehicle body that has non-aerodynamic shapes, the flow separation occurs at its edge. This phenomenon does not depend on the Reynolds number, which allows one to estimate the ratio of inertia forces to viscous forces occurring during the movement of the tested medium. It determines the type of particle movement. Laminar (stratified) motion is characterized by a parallel location of the planes of motion (Re ≤ 2300), while in chaotic (turbulent) motion the directions of particle motions intersect and cause collisions (Re > 50,000). The Reynolds number is expressed as a relation [22,23]. where:
The mechanism of vortex formations as well as their development are closely related to the geometric parameters of the body the medium flows around and the parameters of the tested medium. The von Kármán vortex path phenomenon happens through the generation of vortices on an obstacle placed perpendicular to the flowing medium. The vortex generation is regular and the frequency of vortex formation can be described by the following equation [22,23]. where:
The vortices are cyclical, local disturbances of medium’s velocity and pressure, which, at the point of their formation, tend to increase geometrically and energetically, then they are blurred, and in the final phase they completely disappear. A characteristic feature of the phenomenon is that the vortices are formed alternately one at a time on each side of an obstacle placed perpendicular to the flowing medium, while the frequency of their generation is directly proportional to the speed of the flow stream. Additionally, the frequency of vortices generated in an obstacle does not depend on the physical properties of the fluid, but only on its velocity. The speed measurement result depends on the temperature and the chemical composition of the tested medium [22].

The research presented in the article was carried out with the use of a passenger car equipped with a 2.8 dm3 inline six-cylinder SI drive unit (Figure 4, Table 1). The multi-point injection (MPI) engine had a power rating of 142 kW at 5500 rpm and a maximum torque value of 280 Nm at 3500 rpm. The vehicle had an automatic gearbox RWD (Rear Wheel Drive), was equipped with a TWC (Three Way Catalyst) catalytic converter and was homologated in accordance with the Euro 3 standard. The tests were carried out without load; only the impact of changing the vehicle rotational speed was checked. The research object was in a state of normal exploration. The temperature of the cooling liquid was stable and oscillated between 78 °C and 82 °C. Before starting the measurements, the vehicle was warm, so it must be assumed that the catalytic converter has a light-off temperature. This means that catalytic reactions took place in the exhaust gas treatment system and that it correctly converted the toxic compounds. The exhaust gas temperature was not recorded in this measurement cycle. The tests were carried out on a specially built test stand, using PEMS measuring equipment. Both for a stationary vehicle and a moving vehicle, the measurements were made with the use of a measuring probe placed at different distances from the exhaust system (Table 2).

The research covering the exhaust emissions concentration measurement in the exhaust gas cloud behind a stationary vehicle was carried out at the measuring stand located at the Poznań University of Technology. Measurements were made for four rotational speeds of the engine: 850 rpm, 1500 rpm, 3000 rpm and 4000 rpm. The measurement cycle, in which the concentrations of harmful exhaust gas compounds were measured behind a moving vehicle, was carried out in real operating conditions during a test drive. The selected route (Figure 5), was 8.9 km long, and ran through the ring I of the transport frame of the Poznań agglomeration, covering the very center of the city of Poznań.

The Micro PEMS Axion R/S+ mobile analyzer system manufactured by Global MRV was used for all exhaust emission measurements on the static test bench. It enables measurement of the concentration of gaseous toxic exhaust compounds with the use of a non-dispersive infrared—NDIR (CO2, CO, HC) analyzer and an electrochemical (NO) analyzer. The equipment also allows the measurement of PM concentration using the Laser Scatter-based method, in which the speed of particle movement is measured (taking into account the values assigned to PM10). This apparatus was also used for real drive road tests in order to enable a measurement of exhaust sampled directly from the exhaust pipe. The Semtech DS measuring apparatus from Sensors Inc. was also used to measure the concentrations in real driving conditions, enabling the measurement of the concentration of gaseous exhaust components. The FID (Flame Ionization Detector) analyzer was used to measure the HC concentration. Measurement of NOx (NO and NO2) was performed with a non-dispersive analyzer with ultraviolet NDUV radiation. The concentration of CO and CO2 was determined by the non-dispersive method using NDIR (Non-Dispersive Infra-Red) radiation. The tests were supplemented with the measurement of particulate matter. For this purpose, the AVL Micro Soot Sensor (MSS) device was used to determine the PM concentration with the photoacoustic method. The measuring apparatus, shown in Figure 6 in and described in Table 3 gearbox RWD (Rear Wheel Drive), was equipped with a TWC (Three Way Catalyst) catalytic converter and was homologated in accordance with the Euro 3 standard numbered lists and can be added as follows.

4. Analysis of Exhaust Gas Concentrations in the Cloud behind the Vehicle

From the studies of the relative exhaust gas dispersion behind the vehicle, it is apparent that vehicle movement is beneficial in the assessment of exhaust gas concentrations behind a moving vehicle, because the measured emission values at successive distances behind the exhaust system in most points achieve better parameters than in stationary tests. The dispersion of harmful compounds in the air behind the vehicle is similar, despite the fact that their concentrations reached different values. The largest observable differences occurred in the case of nitrogen oxides and particulate matter. In stationary measurements, the impact of external wind and air movement on the measurement results has been limited. In real operation, however, this was not possible to do. Nevertheless, the meteorological conditions, which are implemented in the numerical calculations, were measured. The obtained test results were used in the simulation of exhaust gas dispersion behind vehicles with various body types in the ANSYS FLUENT software. The obtained research results presented in the article were used, among others, in the analysis of exhaust gas temperature distribution, speed, density, etc. A proper assessment of the presented test results makes it possible to extend the models for new vehicle bodies/types of vehicles as well as to simulate different operating conditions. The most important conclusion from the performed research is the confirmation that carrying out exhaust emission measurements behind a moving vehicle is indeed possible, while maintaining the appropriate distance and taking into account the phenomenon of dispersion of exhaust components (different for individual combustion products).

The research was funded by European Union from European Regional Development Fund through the National Centre for Research and Development (Narodowe Centrum Badań i Rozwoju)—research project within the Smart Growth Programme (contract No. POIR.04.01.02-00-0002/18). 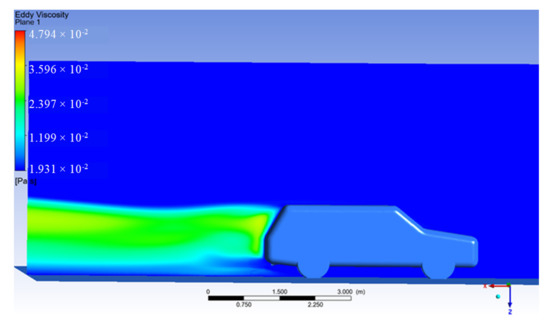 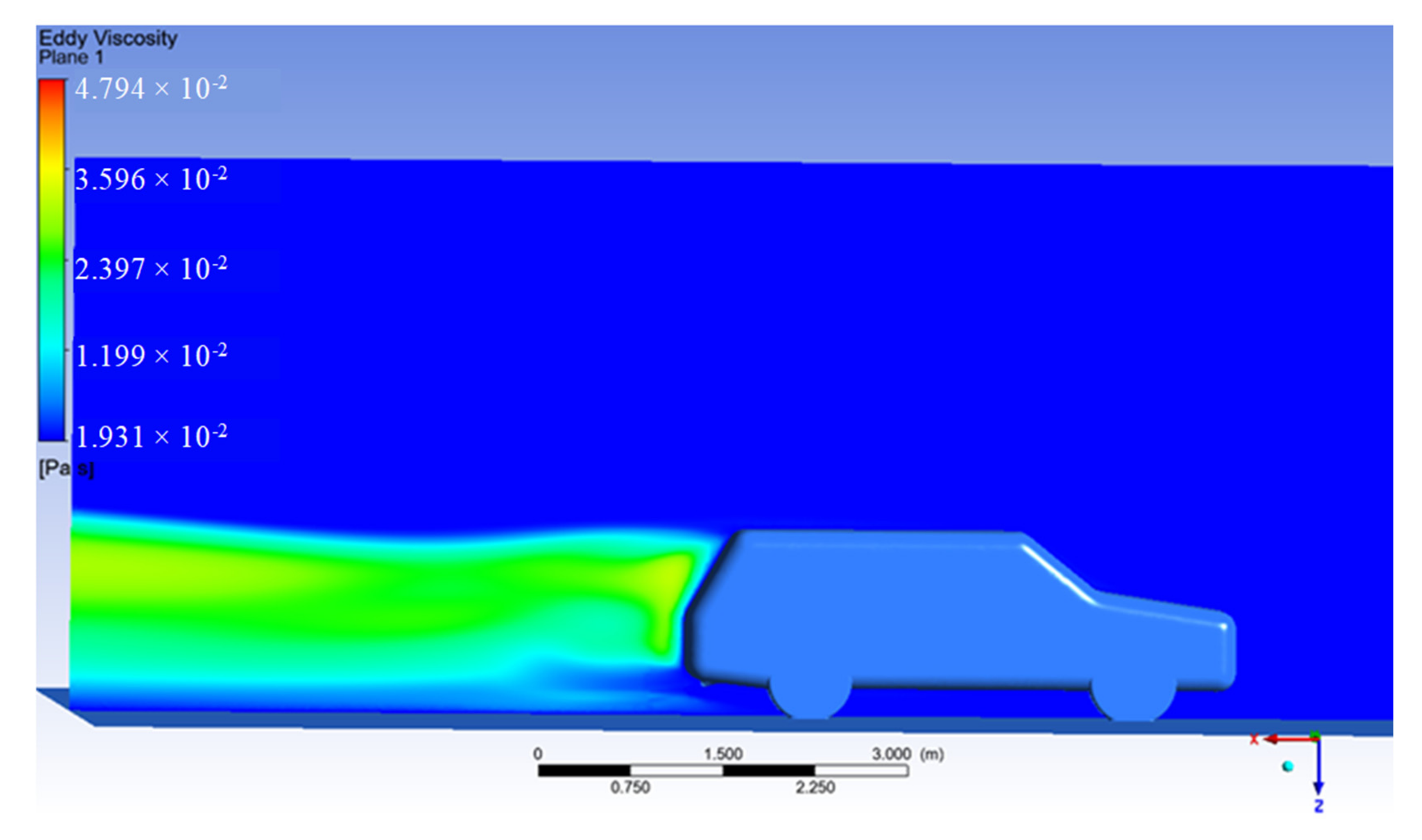 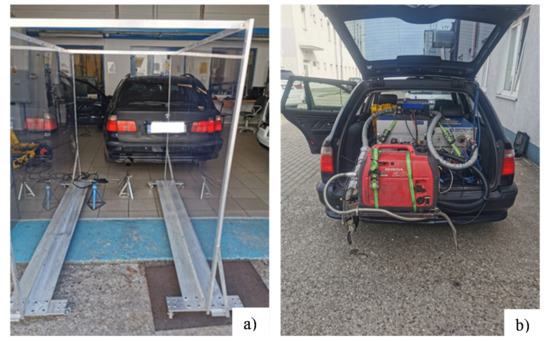 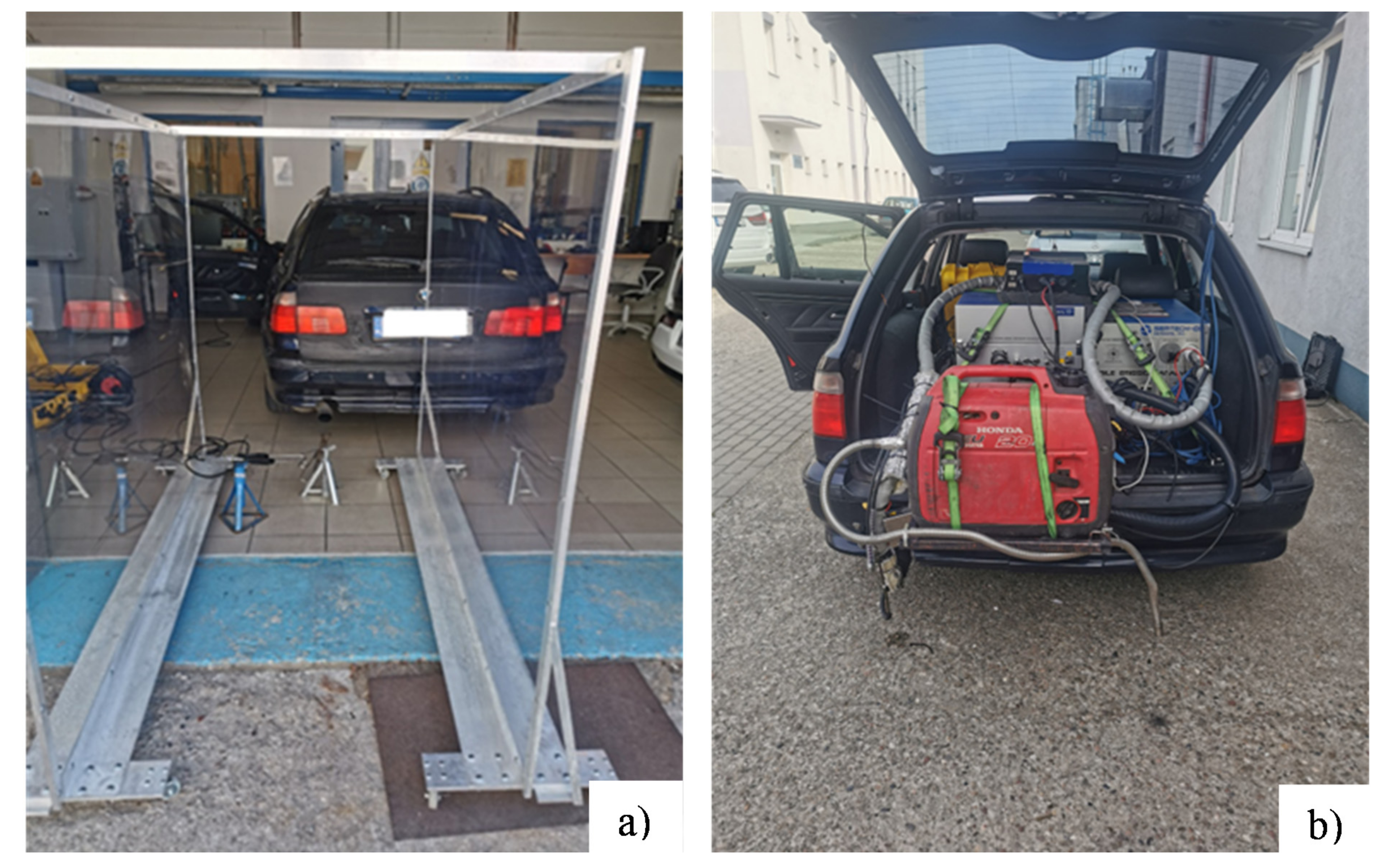 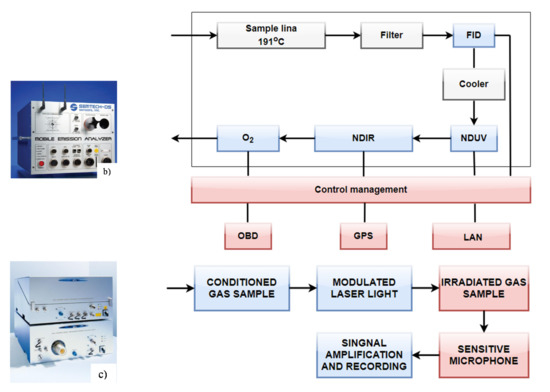 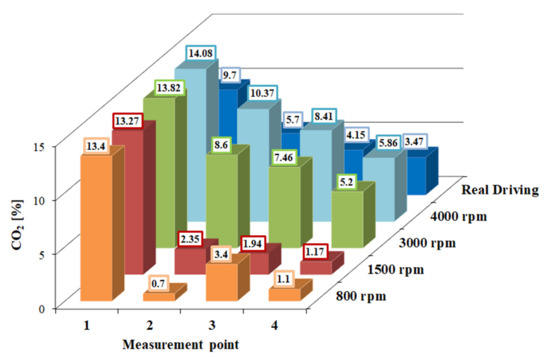 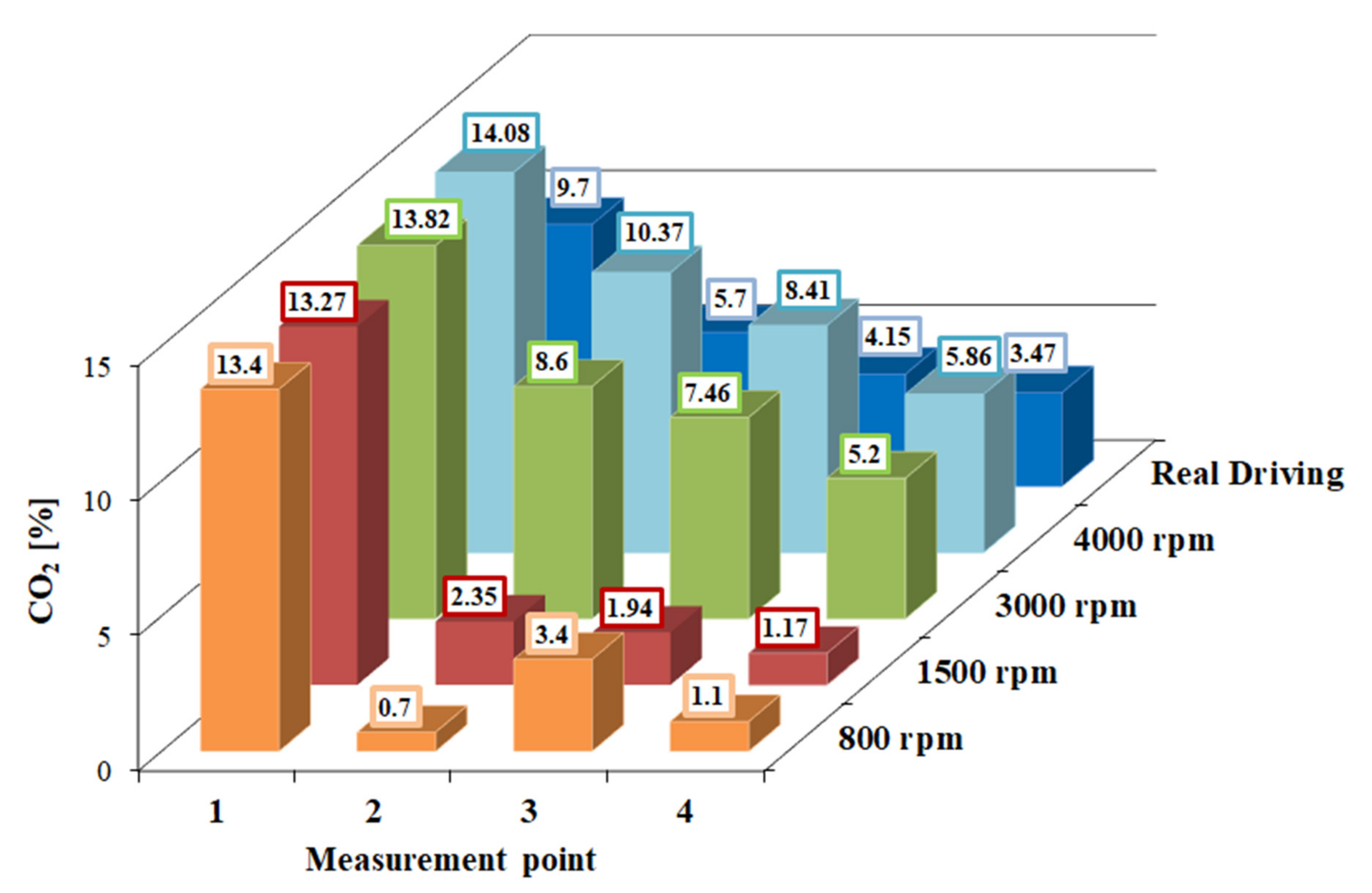 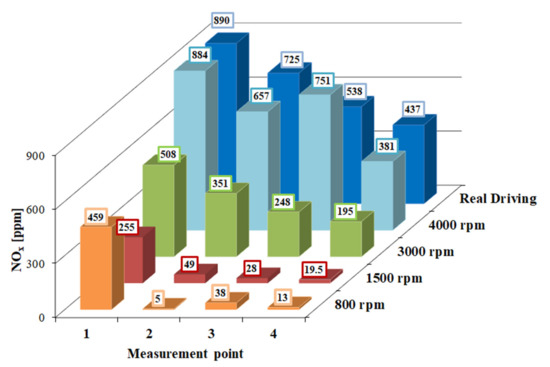 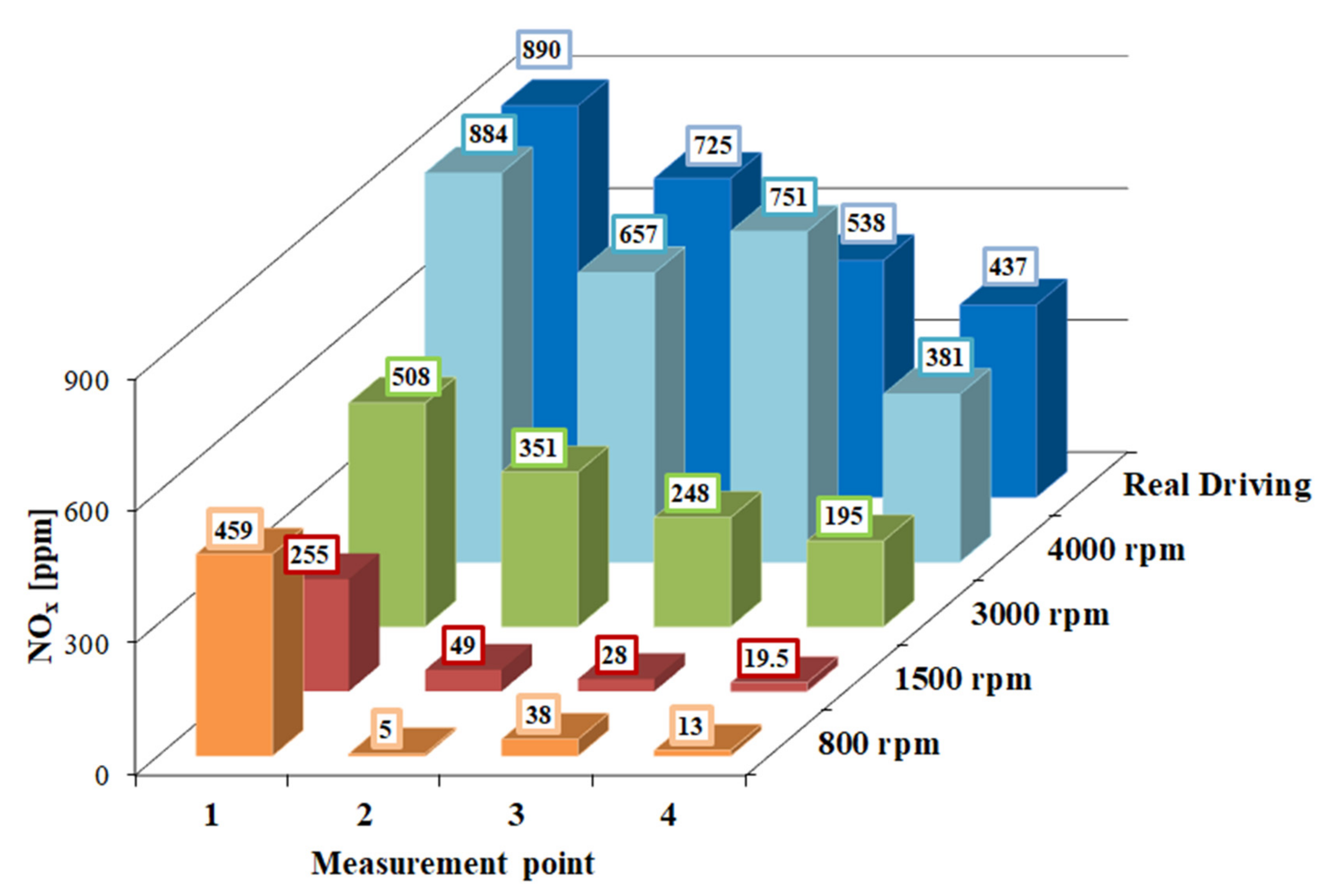 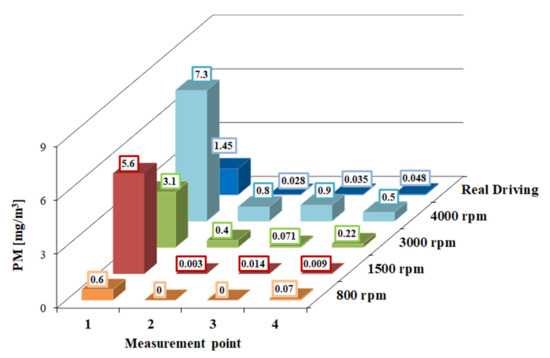