Modeling Water Droplet Freezing and Collision with a Solid Surface

:
Water droplets released from the sea surface represent one of the major causes of ice accretion on marine vessels. A one-dimensional model of the freezing of a spherical water droplet moving in cold air was developed. The crystallization model allows one to obtain an analytical solution if a uniform temperature distribution over the liquid’s core is assumed. The model was validated using STAR CCM+ Computational fluid dynamics (CFD) code. A collision of a partially frozen droplet with a solid wall assuming the plastic deformation of an ice crust was also considered. The ratio of the crust deformation to the crust thickness was evaluated. It was assumed that if this ratio were to exceed unity, the droplet would stick to the wall’s surface due to ice bridge formation caused by the water released from the droplet’s core.
Keywords:
breakage; collision; droplet–wall sticking probability; crystallization; ice crust; modeling; ice-accretion

Droplets may be generated on water surfaces under windy conditions. As they are transported with cold air, the droplets rapidly cool and then either partially or entirely solidify. If it collides with a solid wall, such a partially frozen droplet may either stick to the wall’s surface or bounce off. Particles sticking to offshore structures and ships’ surfaces may eventually lead to significant ice accretion, representing a severe problem for further equipment exploitation [1].
The rate of the ice accretion depends mainly on the following factors [2]: (1) wind speed; (2) surface-wave conditions; (3) ambient air temperature; (4) air humidity; (5) water surface temperature; (6) water salinity; (7) angle of droplet-surface interaction; and (8) properties of the vessel’s (equipment’s) surface, its special orientation, and its speed. Additional loads caused by ice formations alter the vessel’s or stationary structure’s center of mass, increasing construction instability risks. Another important problem is the erosion of floating wind turbines.
There is a lack of statistical data for accurate analyzing the accretion problem [1]. Therefore, a mathematical model can be a useful tool for ice formation forecasting. A number of ice accretion models have been reported for different objects, such as aircraft [3,4], electrical power lines [5,6], and marine equipment [7]. The ice accretion process involves the modeling of several sub-processes. First, a droplet’s generation from a water surface and interaction with wind flow have to be modeled. A model should properly forecast droplet generation frequency, size, and velocity distribution. Second, the transportation of the droplet through the ambient air, accompanied by cooling and freezing, should also be modeled. Finally, multiple interactions of droplets with a solid wall and ice layer formation and growth on that wall have to be forecasted. To the best of our knowledge, there are no ice accretion simulation tools that account for all of the aforementioned sub-processes [8]. Moreover, the majority of the known models of these sub-processes are computationally expensive, limiting their employment as components of an efficient computational tool. The present work suggests a preliminary engineering approach to solving the second and third groups of the formulated problems.
We limit our considerations to the development of a simple model of the cooling of a droplet, its partial solidification, and its further interaction with the solid wall surface. To a great extent, our work is in line with the research of [9], who developed a model of the collision of an ice particle with a wall, which has an implied applicability to the modeling of ice accretion. The model presented below is simple and suitable only for an approximate analysis of ice accretion. The simplicity of the model is justified by our intention to incorporate this model into a detailed CFD code developed for 3D simulations of the entire ice accretion process that will be adjusted, verified, and validated with experimental data.

The model consists of two sub-models: (a) droplet cooling and ice crust growth; (b) breakage of a partially frozen droplet caused by its collision with the solid surface.

We would like to emphasize that rapid growth of the ice crust is accompanied with the formation of different defects (e.g., micro-cracks) and, consequently, is characterized by a relatively low strength. There are numerous research works on solid particle–wall collisions. It is worth mentioning a couple of recent experimental works [22,23] where ice particle–wall interactions were studied.
Our estimations showed that a collision of a droplet coated by an ice crust with a wall is usually associated with plastic deformation of the ice. Elastic deformation corresponds to a very low collision velocity and, therefore, does not represent a practical interest.
The process of a collision of a partially frozen droplet with a solid surface can be modeled using the approach suggested in [9]. The corresponding diagram is shown in Figure 4. We limit our analysis to normal collisions, i.e., we assume that the droplet’s velocity is normal to the wall. However, this approach can also be employed for oblique collisions if a velocity component that is normal to the wall is used.
The particle’s displacement during the plastic deformation of the solid crust is described by the following equation [9]: where is the dimensionless droplet displacement during an interaction with the wall surface, is the droplet displacement, Y is the ice’s yield strength (assumed to be MPa [24]), is the radius of the particle–wall contact area, and is the volume of the uncrushed particle part. Note that the time count, , for this equation starts from the moment at which the particle touches the wall.
The initial condition for Equation (10) is the known particle velocity at the moment of touching the wall, , which is written as:
Equation (10) has the analytical solution [9], where the maximum dimensionless center displacement, , is expressed as: where is the collision duration.
In the present work, the equation describing plastic deformation of the ice crust was utilized to evaluate the probability of a particle sticking to the wall in the following way. It was assumed that if the deformation is smaller than the crust thickness, the droplet bounces from the wall. In contrast, if the deformation exceeds the crust thickness, the droplet sticks to the wall due to adhesion caused by the immediate formation of an ice bridge induced by water released from the droplet’s core.

An approach for evaluating the sticking probability of a partially frozen spherical droplet colliding with a rigid wall has been developed. This model includes two sub-models: (1) cooling of a droplet and formation of an ice crust coating the liquid droplet’s core; (2) droplet–solid wall interaction. The formation of an ice crust was modeled by solving the heat conduction equation formulated in the moving coordinate system. A collision of the partially frozen droplet with the wall was modeled with the assumption of plastic deformation of the ice crust. It was assumed that the droplet sticks to the wall if the ice crust deformation exceeds the crust thickness. The critical droplet velocity, indicating the minimum droplet velocity leading to the sticking event, was introduced. The critical velocity was employed as a criterion for illustrating the effects of the droplet size, the total time required for droplet cooling and solidification, and the ambient air temperature on the droplet sticking to the wall. The computed dependencies of the critical velocity on the different factors allow the explanation of the corresponding ice accretion rate trends observed in the field.
Although the developed modeling approach is very approximate, it has the potential to be efficiently incorporated into a prospective three-dimensional CFD code for simulations of ice accretion on different structures as a subroutine. It is also possible to tune our simplified model for more detailed models if improved accuracy is needed.

This research was funded jointly by the Russian Foundation for Basic Research (grant number 20-58-20004) and by the Norwegian Research Council (project number 308780, “Enabling prediction of ice loads on structures in the Arctic” (ICELOAD)).

The reported study was funded by the RFBR and the Research Council of Norway according to the research project № 20-54-55001. 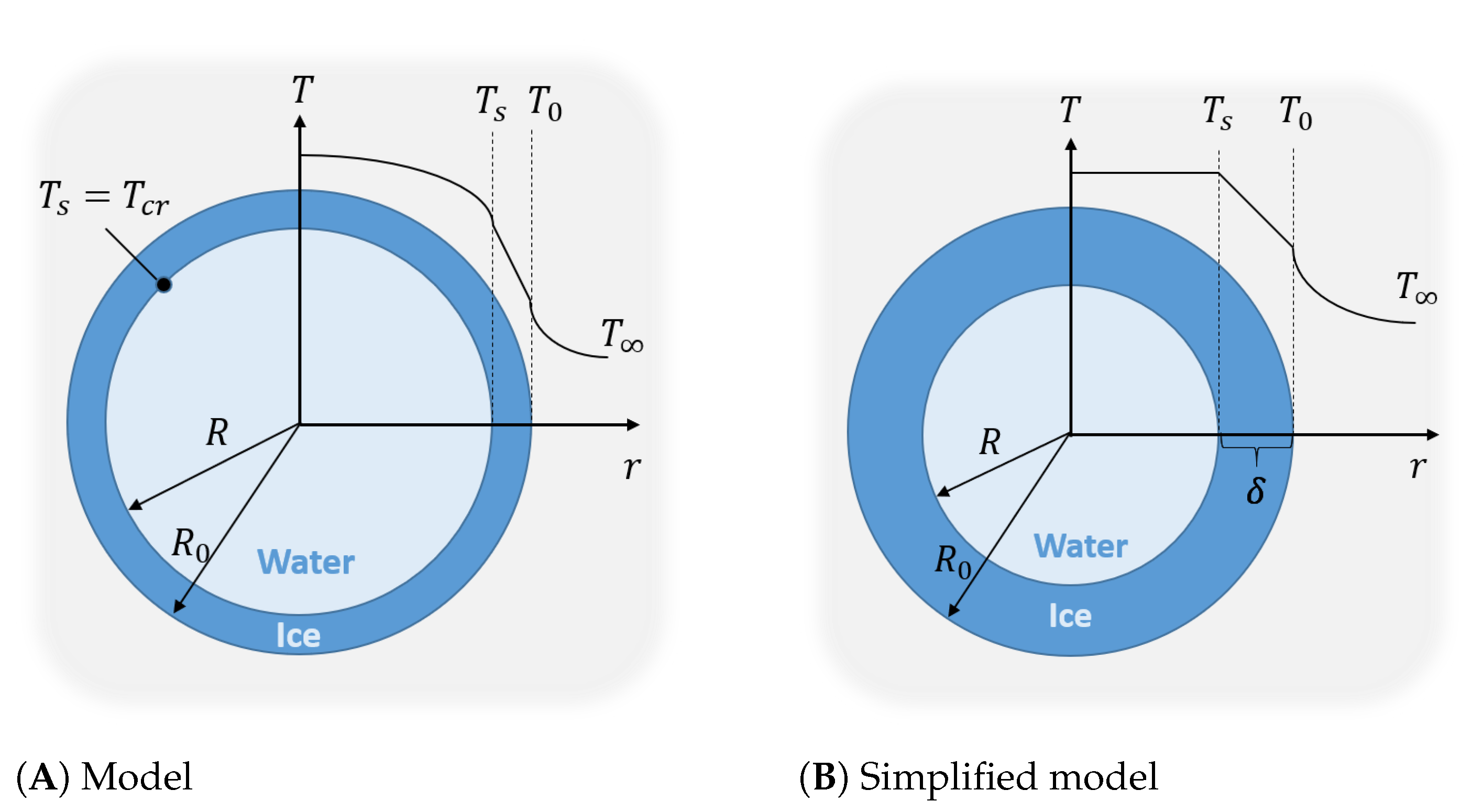 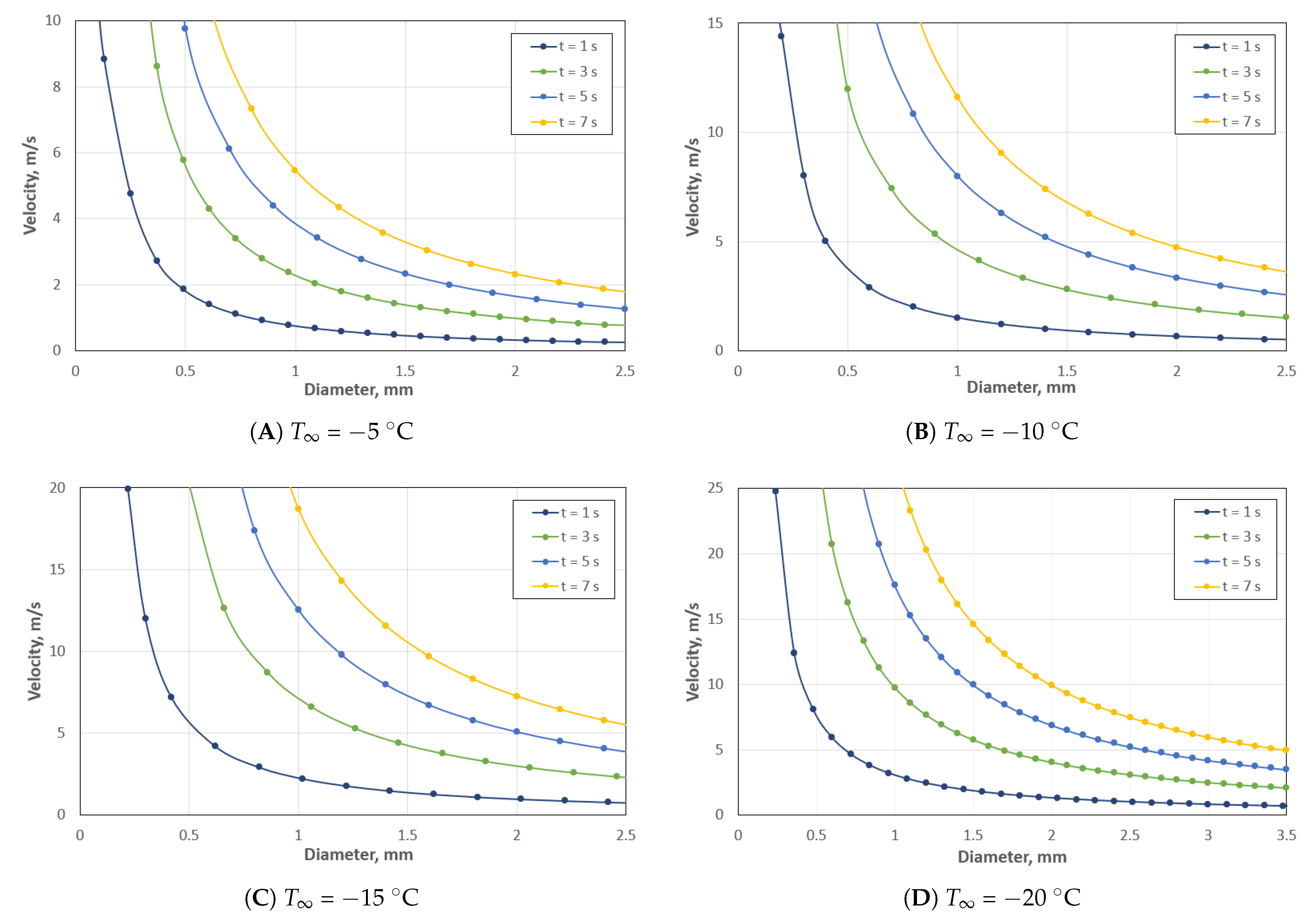