Figure 1 shows the cooling and ventilation model of the coal face when a cold water pipe is arranged in the backfill layer of the goaf. With the continuous advancement of the coal face, the goaf is filled with slurry, and the pipe is placed in the goaf in advance and is embedded in the backfill layer after the slurry is solidified. During coal mining, the airflow temperature of the working face keeps rising due to the heat dissipation of the surrounding rock, coal wall, goaf, etc., and is combined with the influence of other heat sources. When the airflow temperature rises to exceed the limit stipulated in the Coal Mine Safety Regulations [27], it will seriously threaten the physical and mental health of miners and the safety of mining. As shown in the figure, when the cold water is introduced into the pipe in the backfill layer, the side of the backfill body closer to the working face will form a cold wall. Through the principle of radiation cooling, the heat transfer among airflow and cold wall, coal wall, surrounding rock, etc. is conducted, and the heat from airflow and other heat sources is absorbed by the cold wall. The heat absorption of airflow is reduced and the temperature rise of the airflow is decreased by the radiation cooling of the cold wall. The pipe is placed deep in the stratum and the geothermal energy exploitation can be realized by the flowing heat-carrying fluid in the pipe after the mining process is finished.

The heat transfer among the airflow and cold wall, coal wall, surrounding rock, etc., is a complicated three-dimensional unsteady heat transfer process. For convenience of calculation, the following basic assumptions are made:

This paper mainly studies the change rule of airflow temperature in the working face under different working conditions and parameters and solutions are set according to the actual situations of airflow temperature.
A three-dimensional unsteady pressure solver activating the energy equation, the standard k-ε turbulence model, and the DO radiation model are used. Setting boundary conditions, including that airflow inlet boundary is Velocity-Inlet, airflow velocity is 1.5 m/s, 2.0 m/s, 2.5 m/s, 3.0 m/s and 3.5 m/s respectively, the airflow inlet temperature of the working face is 18 °C, 20 °C, 22 °C, 24 °C and 26 °C, respectively, the exit boundary type is outflow, the temperature of surrounding wall is 35 °C, 40 °C, 45 °C, 50 °C and 55 °C respectively, and they are all diffuse surfaces. The governing equation is solved by the simple algorithm with the second-order upwind discrete scheme, and the relaxation factor remains the default.

In order to verify the accuracy of this simulation calculation, the results of the literature [29] are used to verify the results in this paper. The verified model length is 500 m, width is 4 m and height is 3 m, the number of grids is 750,000, the time step is 1 s. When no cooling measures are taken, the air supply velocity is 2.08 m/s, the air supply temperature is 20 °C, and the surrounding wall temperatures are 35 °C. When cooling measures are taken, the two sides of the airflow are the cold wall with a temperature of 26 °C, and the temperatures of the top and bottom wall remains unchanged. After the airflow temperature becomes stable, the average temperature of the airflow on 100 m, 200 m, 300 m, 400 m and 500 m sections along the passage is monitored. Figure 5 shows the comparison of numerical simulation results in the literature. It can be seen that the simulation results of the average air temperature are close to the literature, and the error is within 0.5%, which effectively verifies the accuracy and reliability of the simulation method.

3.1. Analysis of Airflow Temperature Variation along the Working Face before and after Cooling

3.2. Analysis of Airflow Temperature Variation at Measuring Points of Working Face before and after Cooling

3.6. Airflow Temperature Distribution in Working Face under the Most Unfavorable Condition

There are no conflicts of interest for this work. 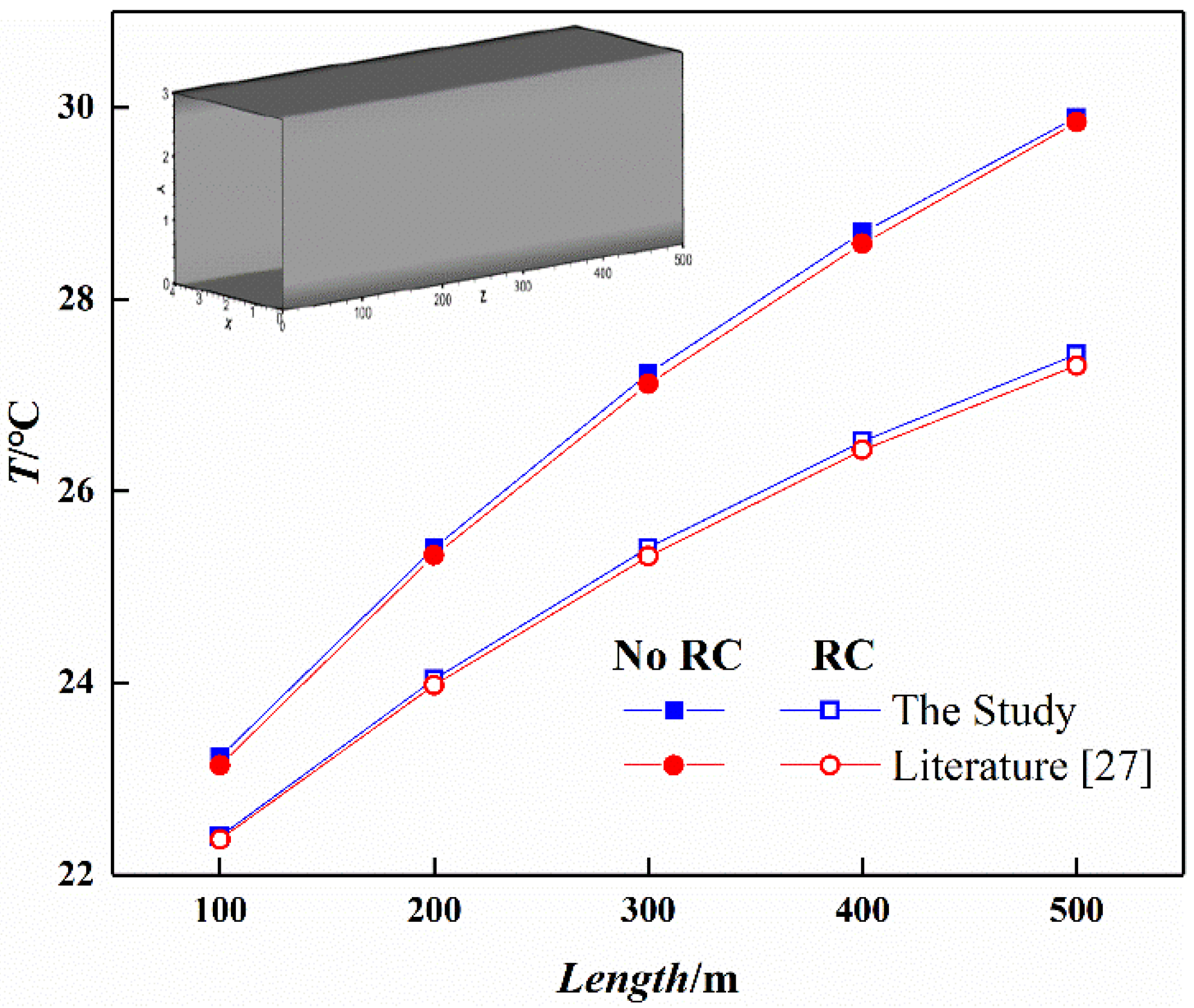 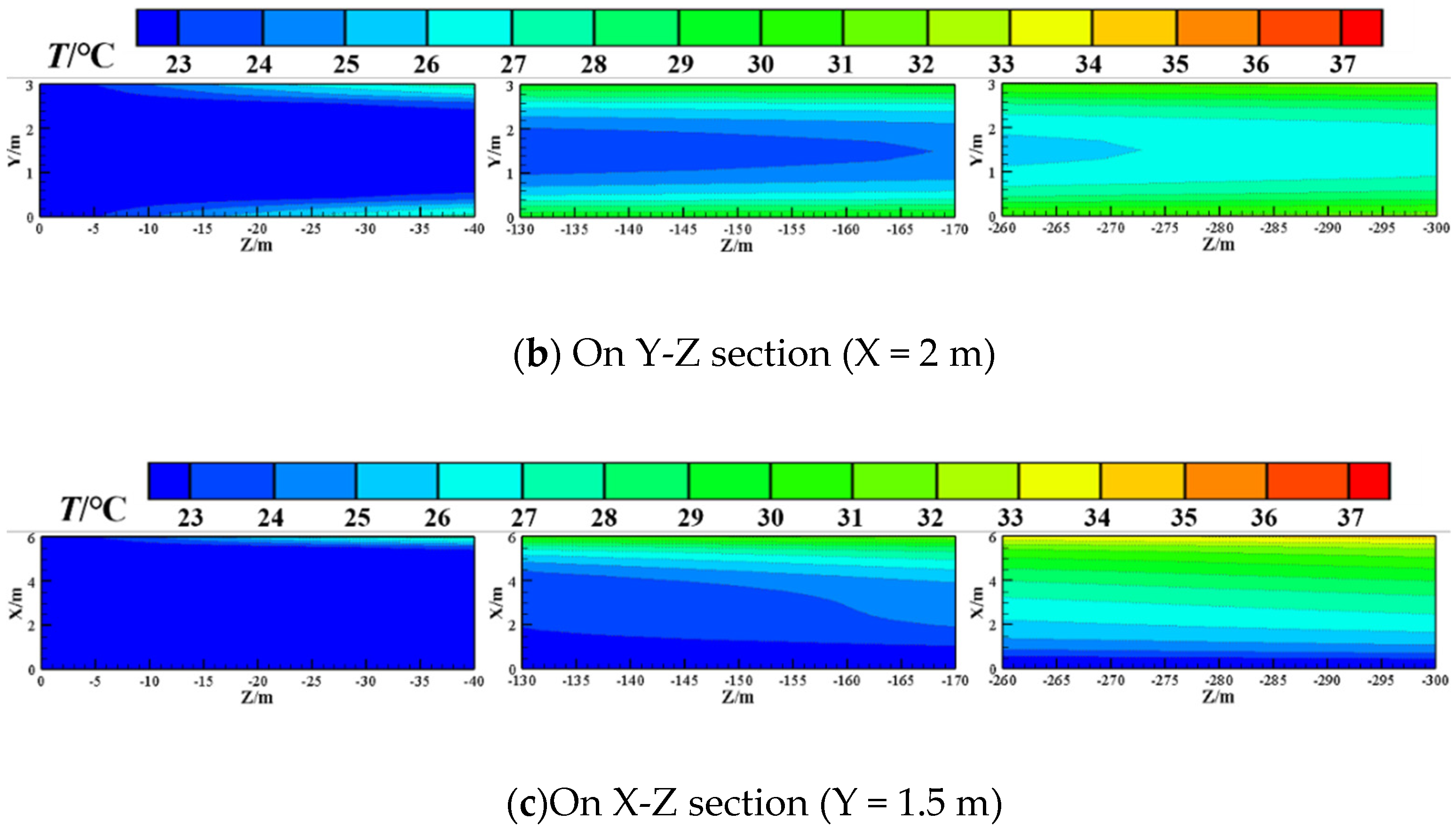 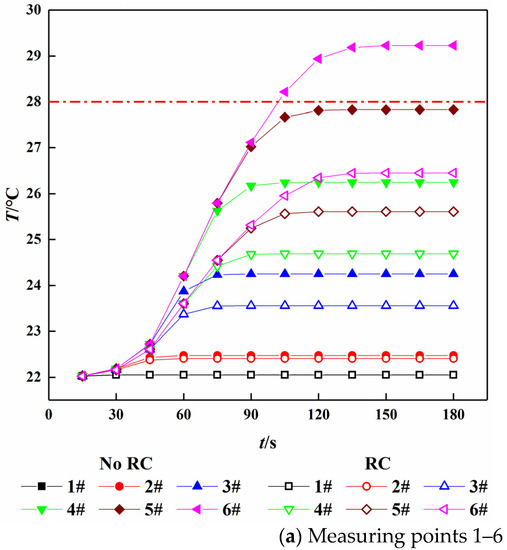 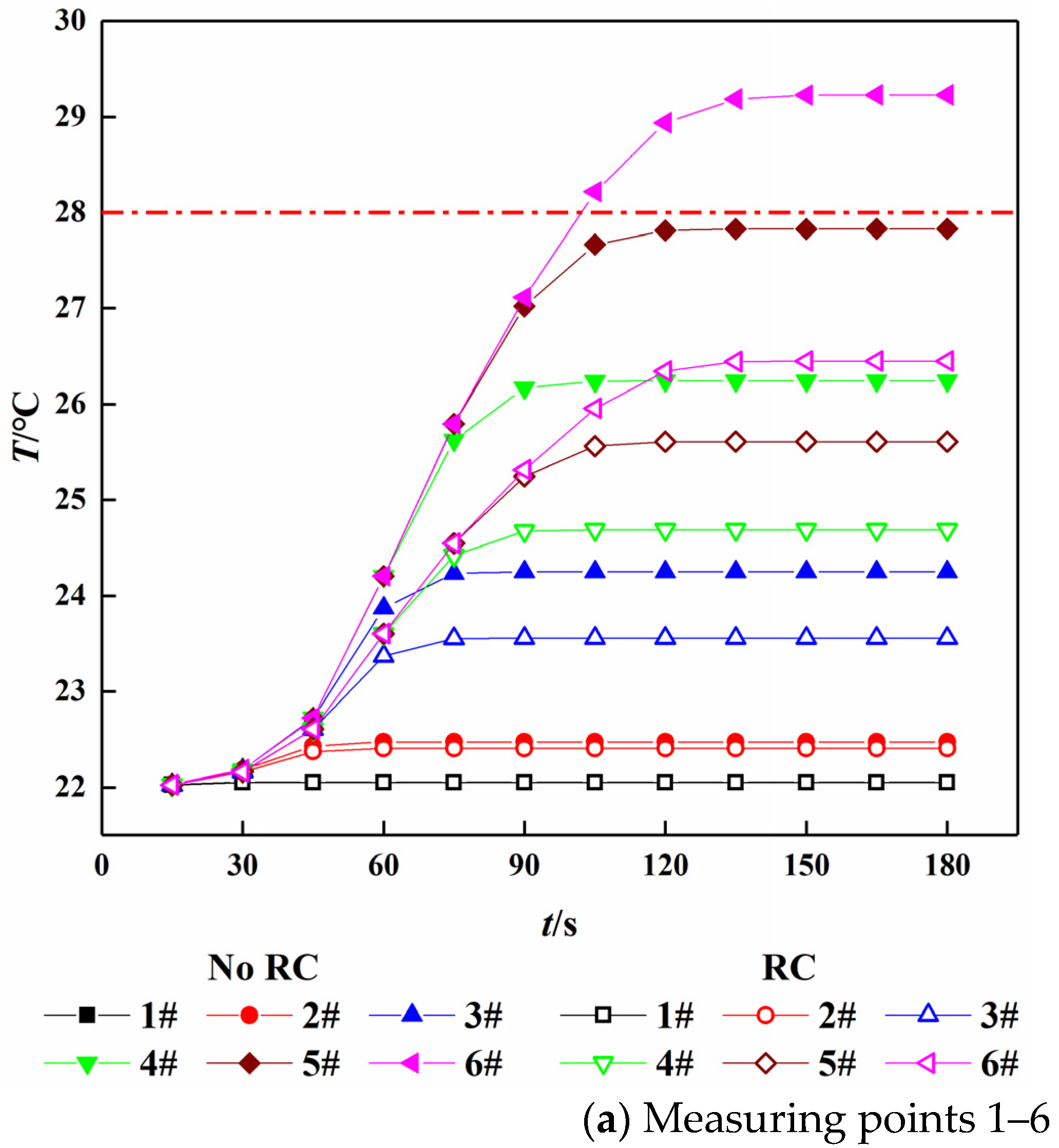 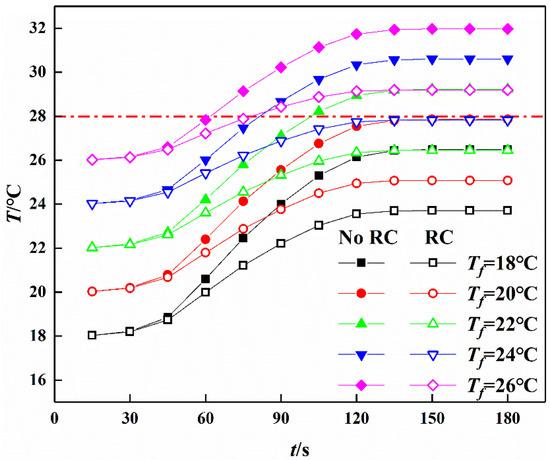 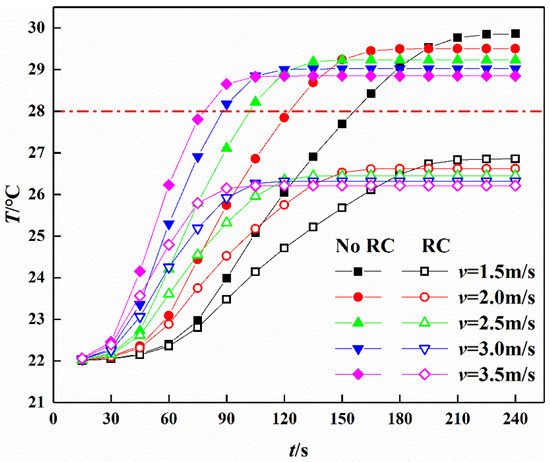 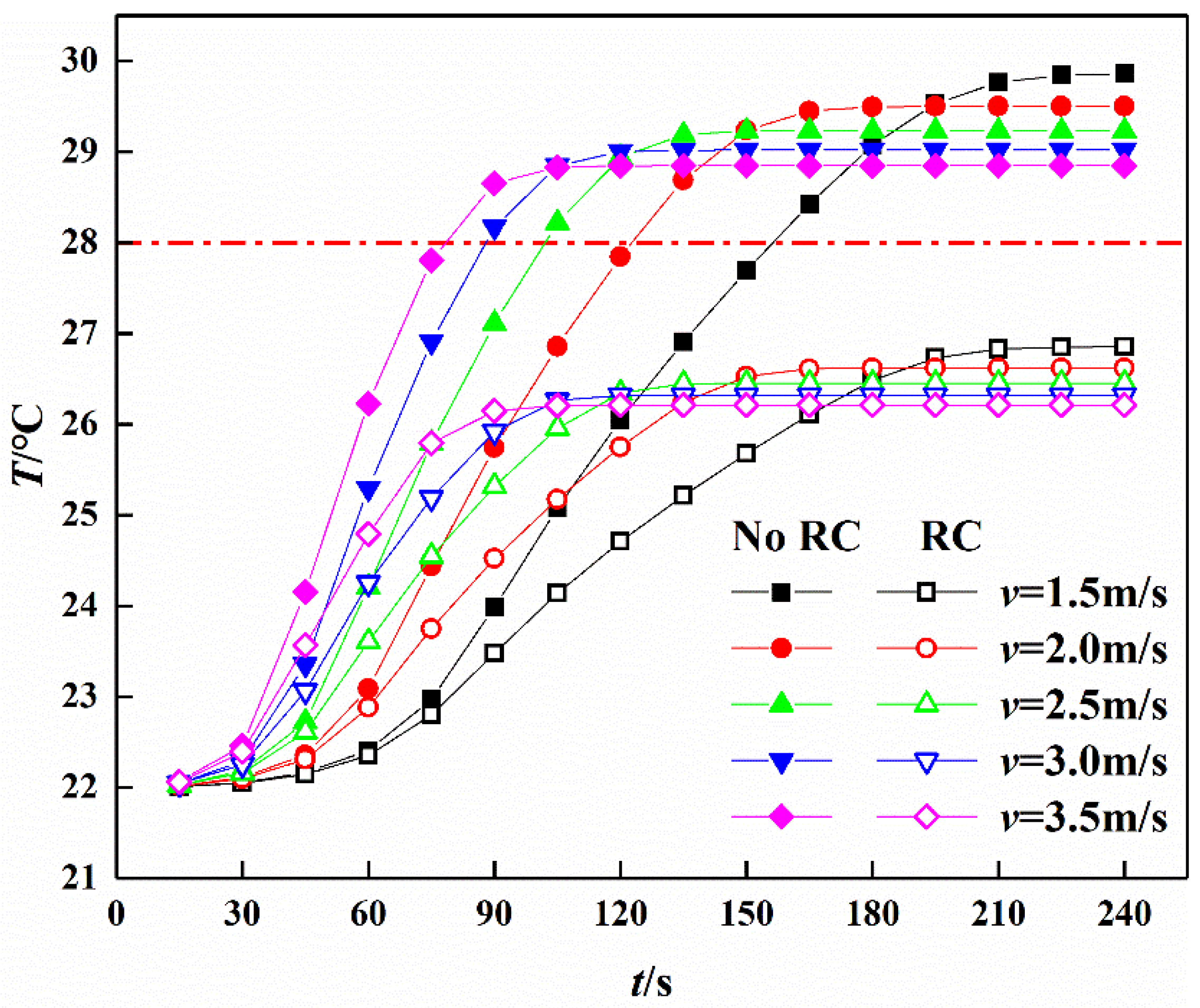 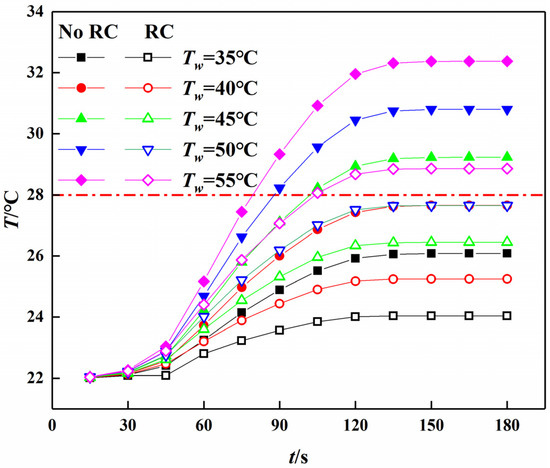 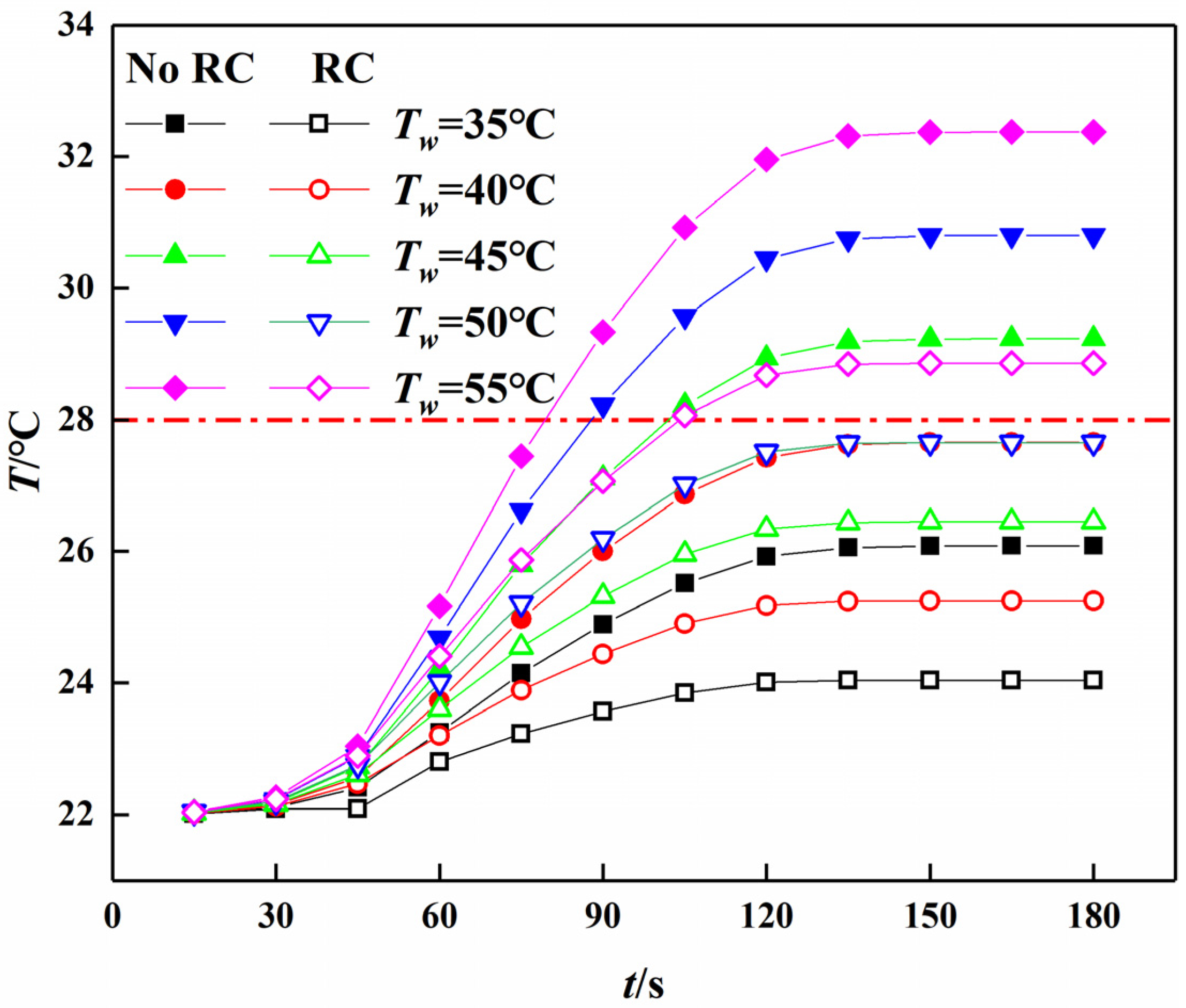 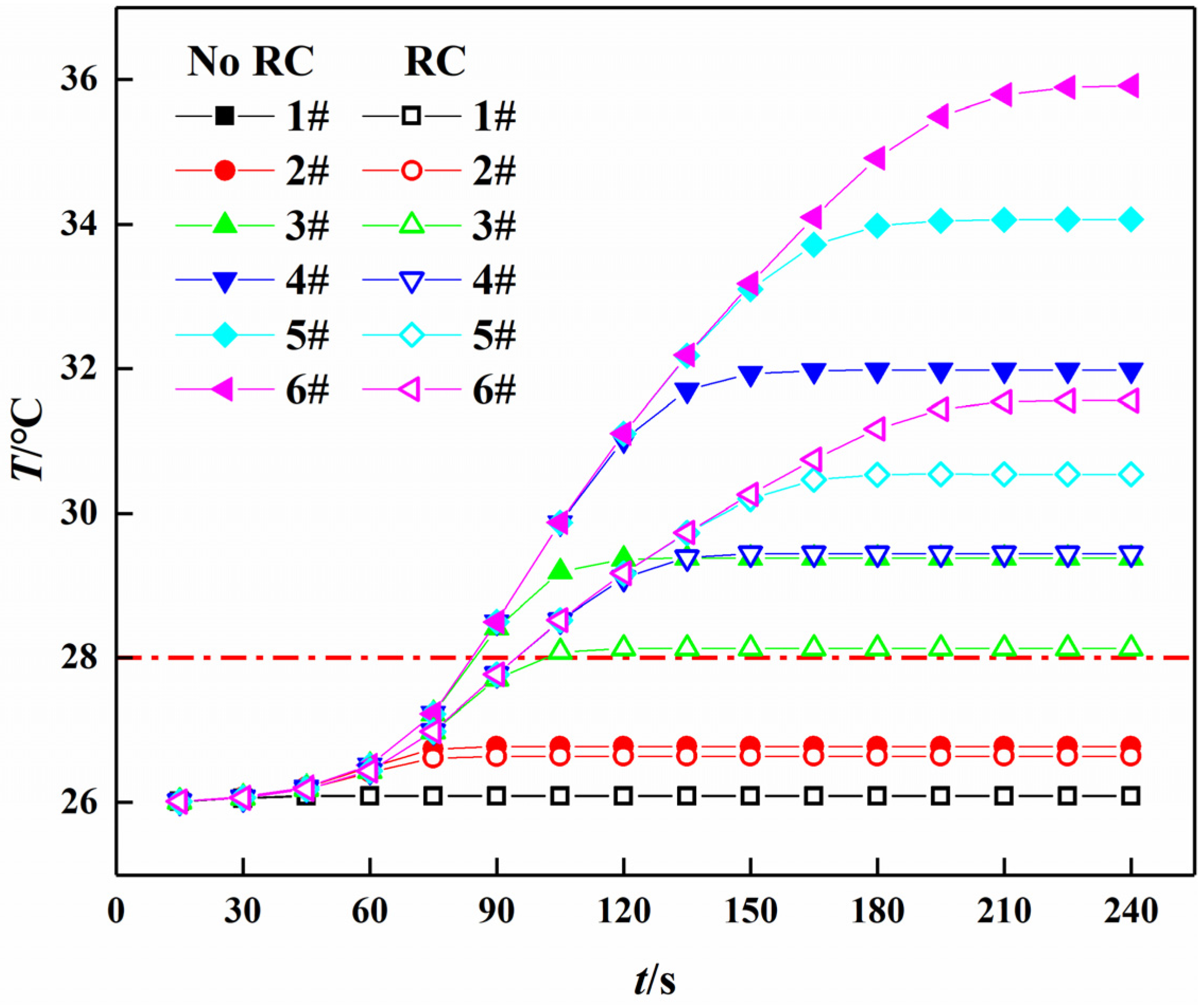