Diethyl Ether as an Oxygenated Additive for Fossil Diesel/Vegetable Oil Blends: Evaluation of Performance and Emission Quality of Triple Blends on a Diesel Engine
Previous Article in Journal

Energy Poverty and Protection of Vulnerable Consumers. Overview of the EU Funding Programs FP7 and H2020 and Future Trends in Horizon Europe

The Directive 2010/31/EU on the energy performance of buildings has introduced the standard of “nearly zero-energy buildings” (NZEBs). European requirements place the obligation to reduce energy consumption on all European Union Member States, particularly in sectors with significant energy consumption indicators. Construction is one such sector, as it is responsible for around 40% of overall energy consumption. Apart from a building’s mass and its material and installation solutions, its energy consumption is also affected by its placement relative to other buildings. A proper urban layout can also lead to a reduction in project development and occupancy costs. The goal of this article is to present a method of optimising single-family house complexes that takes elements such as direct construction costs, construction site organisation, urban layout and occupancy costs into consideration in the context of sustainability. Its authors have analysed different proposals of the placement of 40 NZEBs relative to each other and have carried out a multi-criteria analysis of the complex, determining optimal solutions that are compliant with the precepts of sustainability. The results indicated that the layout composed of semi-detached houses scored the highest among the proposed layouts under the parameter weights set by the developer. This layout also scored the highest when parameter weights were uniformly distributed during a test simulation. View Full-Text
Keywords: sustainable building; energy efficiency; NZEB; sustainable development sustainable building; energy efficiency; NZEB; sustainable development
►▼ Show Figures 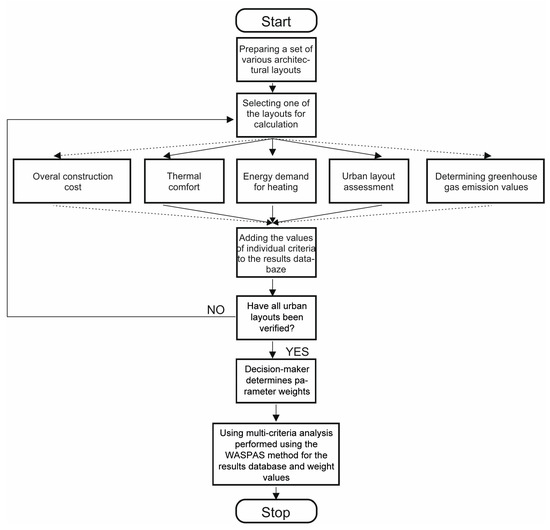