The Energy Transition: Democracy, Justice and Good Regulation of the Heat Market
Next Article in Special Issue

Energy, Exergy and Economic Analyses of a Combined Heating and Power System with Turbine-Driving Fans and Pumps in Northeast China

Vacuum thermionic energy converters (VTEC) are an option for converting heat into electricity that relies on the flow of electrons through vacuum gaps. From the theoretical point of view, they are a highly efficient alternative to thermo-electrics [1], as well as a key part of several novel concepts such as photon-enhanced thermionic emission (PETE) [2] and hybrid thermionic-photovoltaic energy conversion [3]. The basic model for calculating the ideal current–voltage characteristic of a thermionic converter is the Richardson–Duhmann model [4] that allows the electron fluxes between emitter (cathode) and collector (anode) to be calculated from which the efficiency of the converter can be derived. However, several assumptions are involved in this model and we wonder if these assumptions led, at the end, to a model consistent with the laws of thermodynamics. To verify this consistency, we have developed next a thermodynamic model that allows the entropy generation rate at the emitter and at the collector to be calculated in order to check these are positive or zero. To develop this model, we first review the working hypothesis of the Richardson–Duhmann model so that we make sure we use the same hypothese when calculating the entropy fluxes. Hypothese related to the electron density of states and electron velocity distribution are reviewed in Section 2 by considering the thermionic emitter in equilibrium. Then, we also include the presence of the collector in equilibrium (Section 3), which will allow us to formulate the energy and entropy fluxes between both and, in Section 4 we generalize the analysis for operating conditions out of the equilibrium, that is, with the emitter hot and the collector biased. Finally, in Section 5, we analyze the thermodynamic consistency of the model.

Figure 1 represents the distribution of electrostatic potential energy () in equilibrium, from the bulk to its surface, of which will later become a thermionic emitter. The Richardson–Duhmann equation models the current-density, JE, of electrons emitted as a function of the temperature, , of this emitter as follows: where e is the charge of the electron (in absolute value), is the number of electrons emitted per unit of time and area by the emitter (this apparently strange notation is used in order to preserve self-consistency with the discussions that will follow), A is the Richardson constant, ΦE is the emitter work-function, and kB is the Boltzmann constant. The minus sign only accounts for the fact that, if electrons flow from left to right, then the electron current density goes from right to left. The Richardson constant is given by: where is the mass of the electron at rest and h is the Planck constant.
In order to clarify the discussions that follow in this paper, it is convenient to quickly review the derivation of Equation (2), as well as the hypothese involved in this derivation.
First, the work-function ΦE is defined as the minimum energy that is demanded in order to make an electron escape from the emitter. This level is referred to the Fermi level in the idea that the Fermi level indicates the last energy level occupied by an electron in the emitter. However, this is only strictly true at 0 K and, approximately true, at higher temperatures, when the density of electronic states in the emitter is very high (as it is assumed to be the case of metals). Notice (Figure 1) that the work-function ΦE is also the maximum of the electrostatic potential energy distribution across the interface of the thermionic emitter. ΦE can be affected in practical cases by the presence of image charges. In spite of these facts, we will assume that the work-function is a property of the emitter material that does not depend on the temperature nor is impacted by charge images. This is a common assumption and will not alter the concepts in this work.
Secondly, once the electron has left the emitter and the interface where there is some charge density, we will assume it becomes a free electron. Under this assumption, its kinetic energy, , just when the electron has left the emitter and become free, is given by: where ϵ is the total energy of the electron, is the speed of the electron, and k is the modulus of the electron wave-vector. We are reminded here that, since the Fermi level has been taken as our zero energy reference, ΦE corresponds also to the electrostatic potential energy of the electron at the point where the electron has become free.
The density of states available to electrons with wave-vector of between k and dk, , is given by: where factor 2 at the numerator comes from considering electron spin degeneracy. Spherical coordinates have been used for expressing the differential volume d3k as . Using Equation (3) for substituting k as a function of the electron total energy ϵ, the density of states in Equation (4) can be expressed also as:
In Equation (5), we have assumed that no electron tunneling takes place (and therefore, that there are no electron states for ) so that only electrons with energy above ΦE can leave the emitter. The electron current density, , due to the flux of electrons leaving the emitter is given by: where, is the Fermi–Dirac distribution function,
Obtained from Equation (3), is the modulus of the velocity of a free electron with energy ϵ. The factor 4π in the denominator comes from assuming that the electron velocity is equally distributed in all directions, θ is the angle of incidence of the vector velocity with the cathode surface (Figure 2) and is the differential of the solid angle.
If we assume the electron gas is nondegenerated, then, and Equation (5) leads finally to:
Which is the equation we wanted to demonstrate taking into account that we have taken as zero the energy reference level .
Equation (5) still needs to be corrected for equilibrium conditions since in equilibrium, whatever the temperature is, the emitter cannot emit any net electron flux. The common assumption is that, in equilibrium, achieved at room temperature, , the electron flux emitted from the emitter is exactly balanced by an electron flux that we will designate for convenience as , coming from the electron cloud that builds-up in the vicinity of the emitter as more and more electrons leave the emitter. This electron cloud is actually the negative charge density that appears close to the emitter surface and that has also been represented in Figure 1c. Consequently,
It is conceptually important to realize that, in equilibrium, once we move away from this electron cloud, the electric field is zero and, therefore, the electrostatic potential has to be constant, as it also has been represented in Figure 1. The consequence of this is that, the density of states calculated in Equation (5) for a point right outside the emitter (once it has left the electron cloud close to the emitter), is also valid far away from the emitter because electrons are also still free far away from the emitter. Although this assessment might look obvious at this stage, it will not be that obvious when the emitter is placed in front of a collector.

3. Thermionic Emitter in the Presence of a Collector in Equilibrium

4. Thermionic Emitter in the Presence of a Collector Out of Equilibrium

Table 1 collects the energy flux and the entropy flux associated to the electron flux calculated in the previous section. The energy flux is obtained from the electron flux by multiplying by the energy of the electron and the entropy flux is obtained through the grand canonical potential flux . The grand canonical potential is the Legendre transform of the energy with respect to the temperature and the electrochemical potential [11]. The logarithmic term appearing in TI.10, for example, is the result of deriving the grand canonical potential from the gran canonical ensemble in the field of statistical mechanics [12]. The derivation of these formulas follows the reasoning in [6] but changing the Bose statistics of photons for the Fermi–Dirac statistics of electrons, the speed of light of the photons by the electron velocity distribution given by Equation (8), as well as by considering the density of states of electrons given by Equation (5) instead of the density distribution of the photon modes.
To analyze the thermodynamic consistency of the model we will consider first the emitter. As detailed in Figure 8, the emitter receives heat and emits electrons towards the collector transporting an energy and entropy per unit of time. The emitter also receives electrons, not only from the collector, through the vacuum that separates it from the emitter, but also from the electric circuit that connects the emitter and collector through the load. Those traveling through the vacuum transport an energy and entropy whilst those coming from the electric circuit inject in the emitter only chemical energy as work , which carries no entropy, and is given by:
Energy conservation (first law of thermodynamics) demands that: where, is the energy electrons transport from the emitter to the collector and: is the energy that electrons transport from the collector to the emitter.
The second law of thermodynamics states that the conversion process of the heat into a flux of electrons transporting energy has to be such that it creates positive or null entropy. Designating this entropy creation rate as we must assume then that: where, is the flux of entropy leaving the emitter, is the flux of entropy entering the emitter associated to the flux of electrons coming from the collector and is the flux of entropy associated to the input heat.
Substituting from Equation (25) we obtain:
Figure 9 plots for the case of the thermionic converter whose current–voltage characteristic, power output, and efficiency were exemplified in Figure 6 and Figure 7. As it can be seen, it is verified that demonstrating the thermodynamic coherence of the conversion processes taking place in the emitter.
Following a similar approach, we can calculate the production of irreversible entropy at the collector where the energy of the arriving electrons is converted into electrical work , while some energy is dissipated as heat . The energy conservation of the processes taking place at the collector demands that: where,
The fulfillment of the second law requires that: where is obtained from Equation (36). Figure 9 plots also for the case of the thermionic converter whose current–voltage characteristic, power output, and efficiency , defined as: were exemplified in Figure 6 and Figure 7, verifying that > 0.

This work was supported by the European Union’s Horizon 2020 research and innovation programmes AMADEUS under grant agreement 737054 and GRECO under grant agreement 787289 that ensures this work is aligned to the European Open Science Policy. The work has also received support by the Project MADRID-PV2-CM (P2018/EMT-4308) funded by the Comunidad de Madrid supported with FEDER funds.

A. Martí is grateful to A. Datas for valuable discussions and to the reviewers for their valuable suggestions and careful reading.

There are no conflicts to declare. 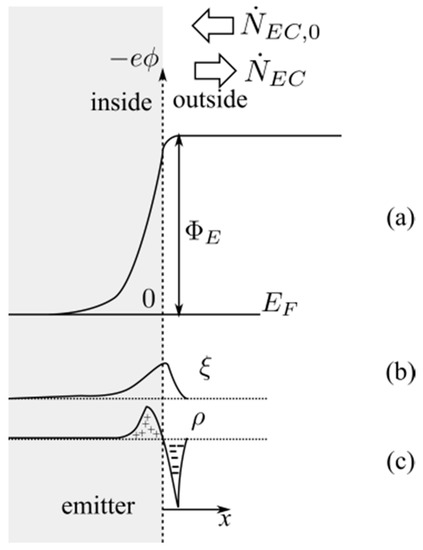 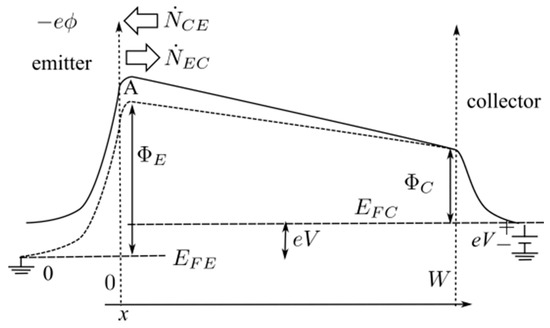 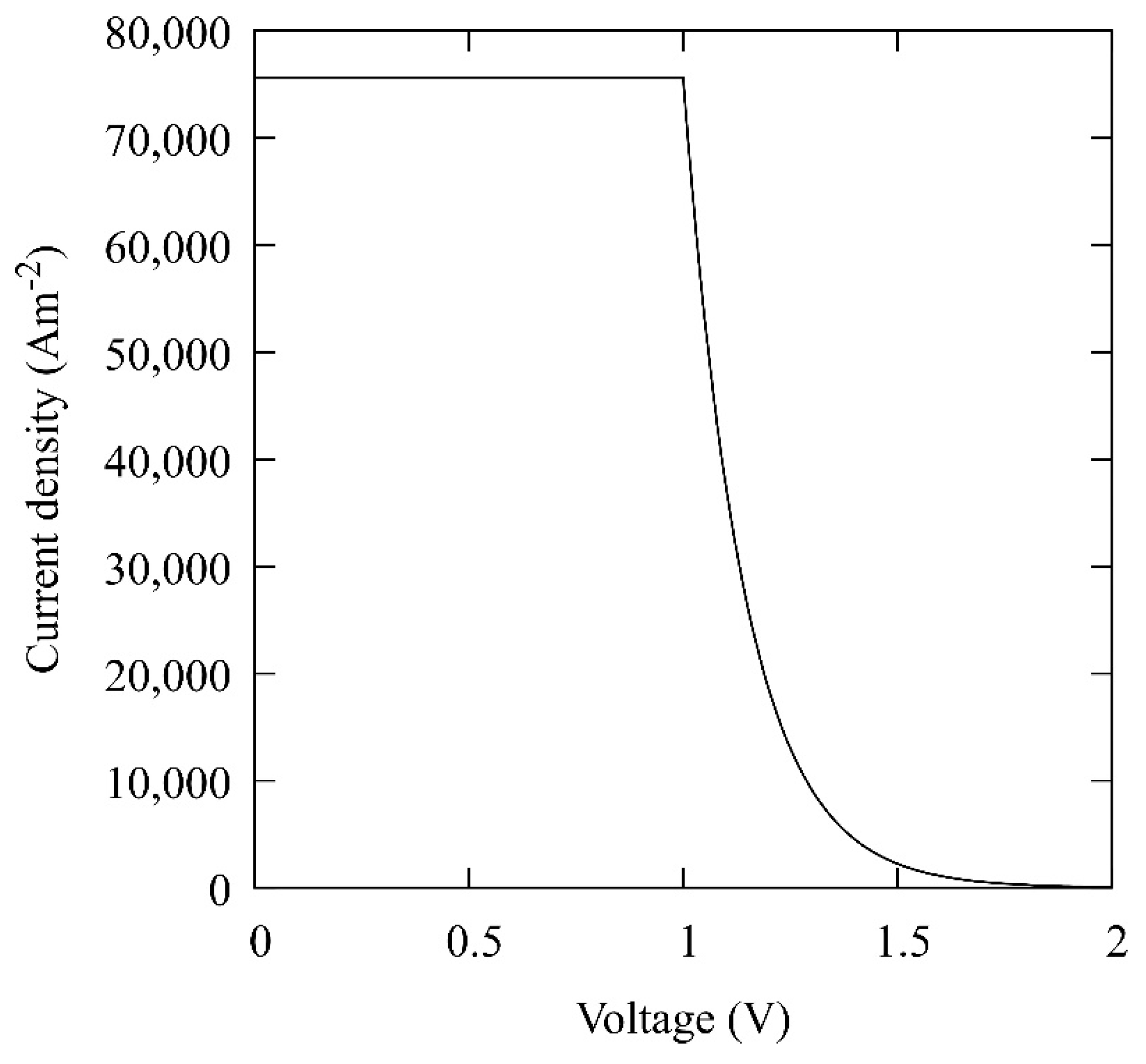 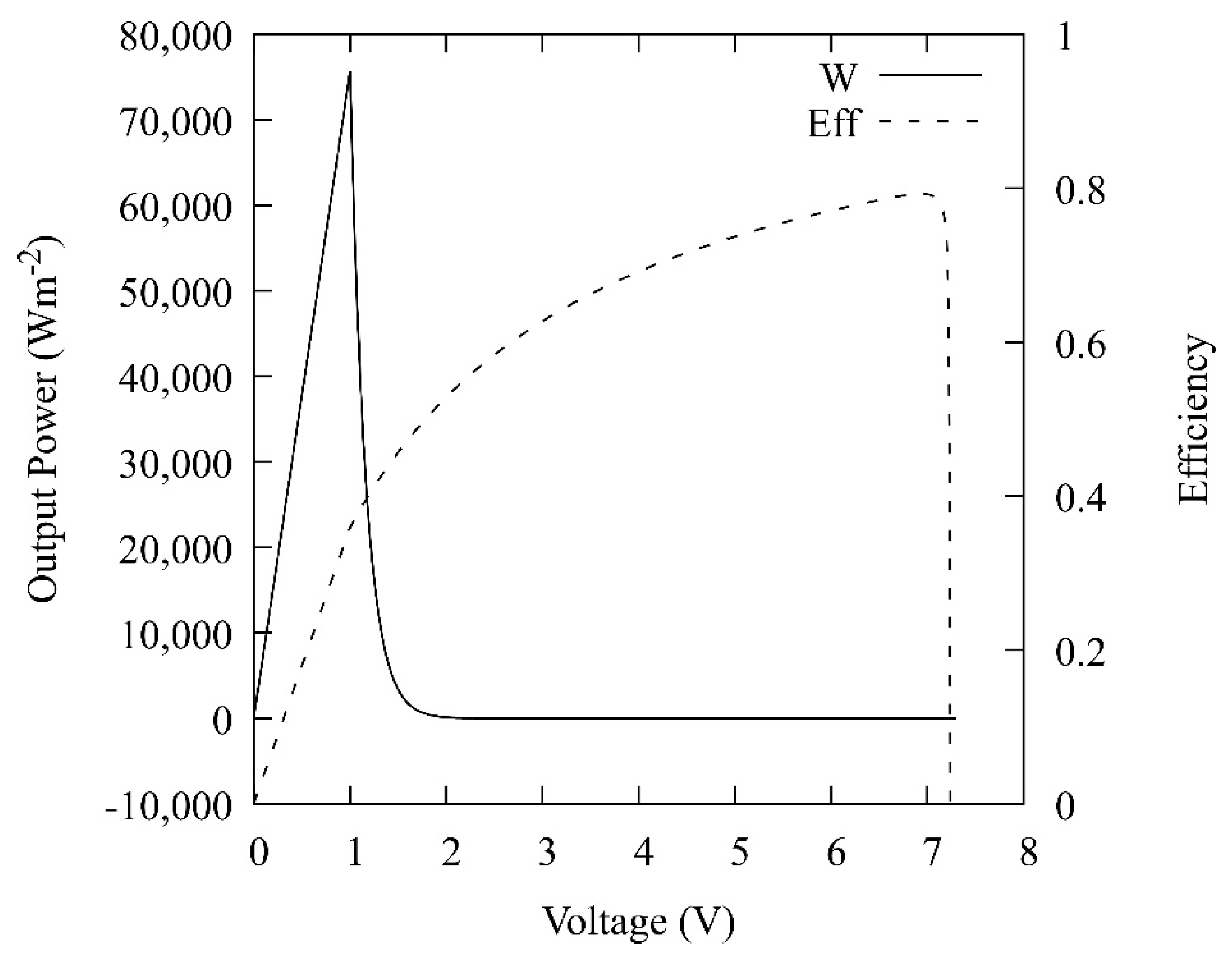 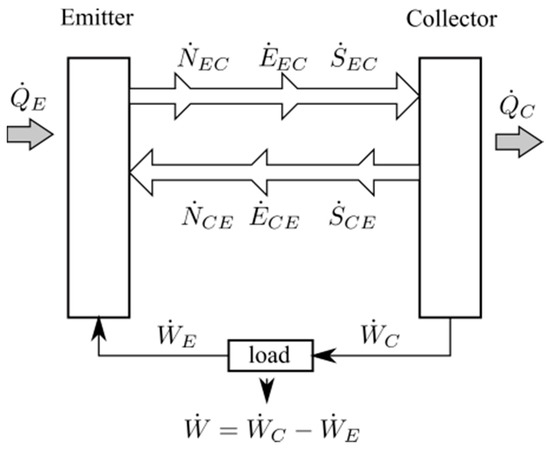 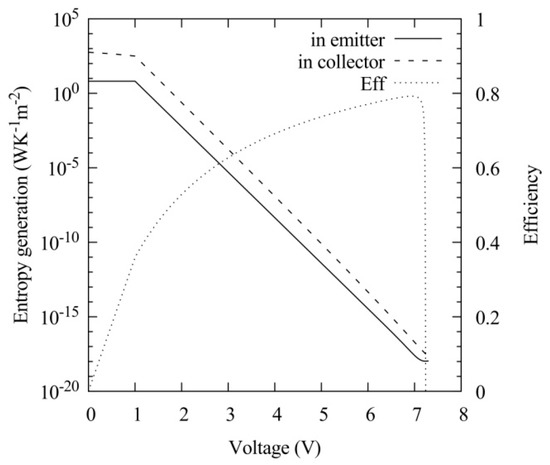 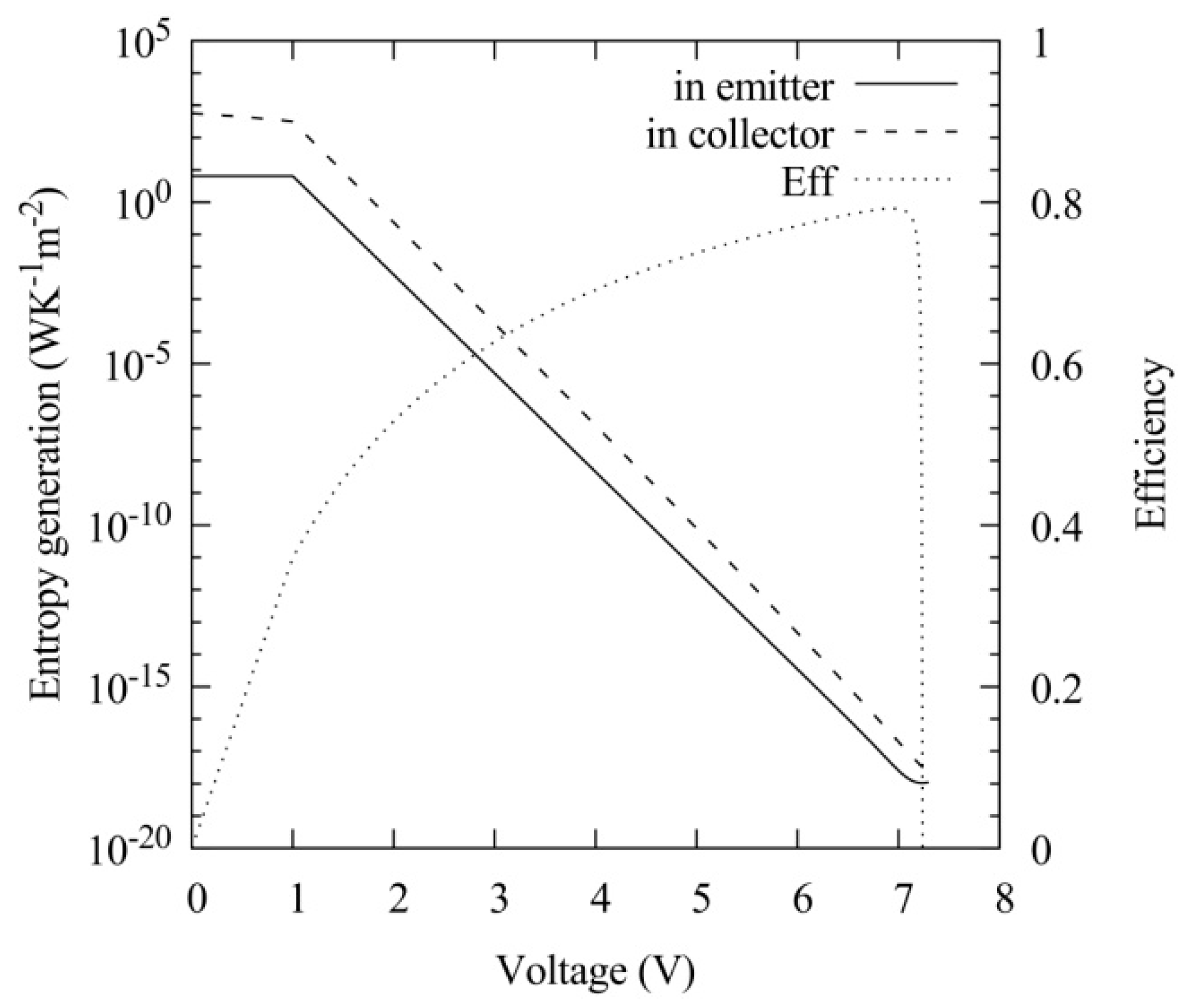