Safe and Efficient Coal Mining Below the Goaf: A Case Study

Coal resources are vital in national energy security, the consumption and production of coal account for 63% and 77% of the primary energy, respectively [1]. With the long-term high-intensity mining of coal resources, coal resources with simple conditions in eastern China are becoming increasingly scarce. The issue of mining short-distance coal seams is widely distributed in China and has been receiving increasing attention to preserve China’s energy supply. The recoverable reserves of short-distance coal seams account for approximately 43% of China’s total coal resources, and over 65% of the mining areas in China have short-distance coal seams [2]. The common mining methods for short-distance coal seams are upward and downward mining. Downward mining is the most widely used mining method, i.e., mining from top to bottom [3]. When the short-distance coal seam undergoes downward mining, the stoping of the upper layer coal causes damage to the floor to a certain depth, and the mining of the lower layer coal is adversely affected by the roof cracking and the abutment pressure caused by the goaf and coal pillars. The law of strata behaviors will be different from the mining of a single coal seam [4]. Therefore, the analysis of the effects of the goaf resulting from the upper coal seam mining on the law of strata behaviors in the lower coal seam will be of great significance for the safe and efficient production of short-distance coal seams.
At present, scholars have studied and summarized the mining of short-distance coal seams and the mining below the goaf. Based on the damage depth formed in the floor because of mining-induced stress, Yingda defined short-distance coal seam groups and established a structural model control theory for them [5]. Ming studied the evolution and influence of stress concentration and rock fracture in deep multi-coal seam mining, established a mechanical model using the infinitesimal strain theory, and analyzed the failure of the middle layer at the vertical and horizontal directions [6]. Cheng et al. studied the control of surrounding rocks during stoping of the protected layers under the protective layers using methods such as similar simulation and numerical simulation; they obtained the relationship between the effects of the support methods on the roadway wall rock and structural evolution and the advancing speed of the working face and the failure height of the wall rock and overburden rock [7,8]. Singh et al. determined the stability and support requirements for the short-distance continuous coal seam mining by establishing a numerical model, analyzing and summarizing the prediction formula for the interval between layers [9,10,11]. Qiwei et al. studied the overburden rock structure and crack evolution of the short-distance coal seams and found that the vertical stress concentration moderately decreased on repeated mining, the width and number of cracks gradually increased with the mining of the working face [12,13]. Suchowerska studied the evolution law of vertical stress at the ultra-long working face under the conditions of multi-coal seam mining and found a significant correlation between the influence angle of abutment pressure and the vertical stress below the coal pillar [14]. Shuangsuo used a theoretical calculation method, studied the end face roof via vector analysis, and analyzed the roof structure and mine pressure law during the mining of the lower coal seams [15]. Mandal et al. established a safe mining system for mining below the continuous coal seam goaf by measuring the impact of mining activities on the upper structure with methods such as field surveys, theoretical analysis, and numerical simulation [16,17,18]. Long and Shimin performed cyclic loading and unloading of coal seams to quantify maximum stress and obtain changes in coal seam properties [19]. Zhanbo et al. studied the distribution law of non-uniform stress in the floor coal rock mass under the action of residual coal pillars and the reasonable layout of the lower coal seam roadway [20].
The aforementioned studies performed detailed analyses of the structure and stability of overburden rock in mining coal seams. However, few studies have investigated the stress distribution law during mining in the goaf. Moreover, the research on the law of strata behaviors during the stoping of short-distance coal seams below the goaf is of great significance for stably supporting the wall rock of the stope. Therefore, this study considers the 051508 fully mechanized working face of the No. 15 coal seam in the fifth mining area of Lingxin Mine as the research object and studies the law of strata behaviors under the influence of the goaf of the upper No. 14 coal seam. The study analyzes the working resistance and distribution of the working face supports support for the 051508 working face when the roof fractured and weighting occurred under the influence of the goaf of the upper No. 14 coal seam and summarizes the law of strata behaviors at the working face, thus providing a reference for the mining of working faces with similar working conditions.

2. Overview of the Working Face

The coal seam of the Lingxin Mine 051508 working face has an average thickness of 3 m. The joint fissures develop into a zonal structure, and overall, it is a monocline structure. It has a 12° average inclination angle, 294 m length of the working face, and 2076 m long coal seam. The upper 051408 working face is mined to form a goaf. At the 051408 working face, the No. 14 coal seam in the No. 5 mining area is mined. The coal seam has a 2.5 m thickness. The coal seam structure is stable. A comprehensive long-wall mechanized mining is conducted. The full caving method is used to treat the goaf. The average distance between the No. 14 coal seam and the No. 15 coal seam is 20 m. The Model TAGOR-5200/17/35-POZ hydraulic supports were selected on site, with a 5200-KN working resistance. The lithology of the roof and the floor of the 051508 working face are shown in Table 1 and Figure 1.

3.1. Analysis of the Weighting Interval below the Non-Goaf

3.2. Analysis of the Weighting Interval below the Goaf

Based on the actual geological parameters of the Lingxin Mine 051508 working face, a FLAC3D numerical model was established, the parameters of the goaf are the same as 14 coal, except the constitutive model of the goaf is replaced by the double-yield model, which is dedicated to the goaf (see Table 2), as shown in Figure 4. The size of the model is 400, 360, and 160 m in length, width, and height, respectively. The length of the actual working face used in the simulated stoping is 294 m. The horizontal movement was limited around the model, and the vertical movement was limited at the bottom of the model. A certain uniform load of 2.15 MPa [22] was applied on the top of the model, based on the actual burial depth of the coal seam, to replace the overlying rock stratum that was not simulated, as shown in Figure 5. Meaning of the parameters: (1) Kg/m3: the unit of density; (2) GPa: 1 × 109 Pa, Pa is the unit of pressure upon an area of one square meter; (3) MPa: 1 × 106 Pa.

4.2.1. Vertical Stress Distribution in Front of the Working Face under Different Mining Conditions

4.2.2. Distribution of Plastic Zones of the Working Face under Different Mining Conditions

5. Working Resistance of Supports and its Distribution

5.1. Observation and Analysis of the Pressure of Supports for the Working Face

5.2. Distribution of Working Resistance of Supports

The following conclusions can be drawn from this study:

The authors appreciate the Ningxia Lingxin coal mine for providing the hydraulic support statistics and working face data. 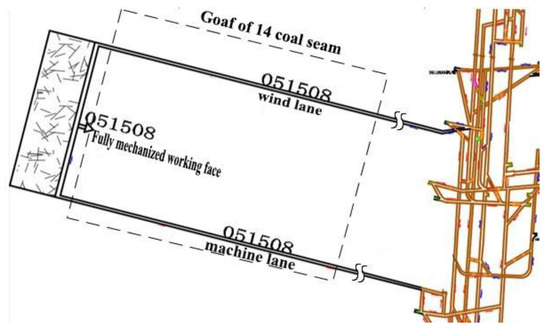 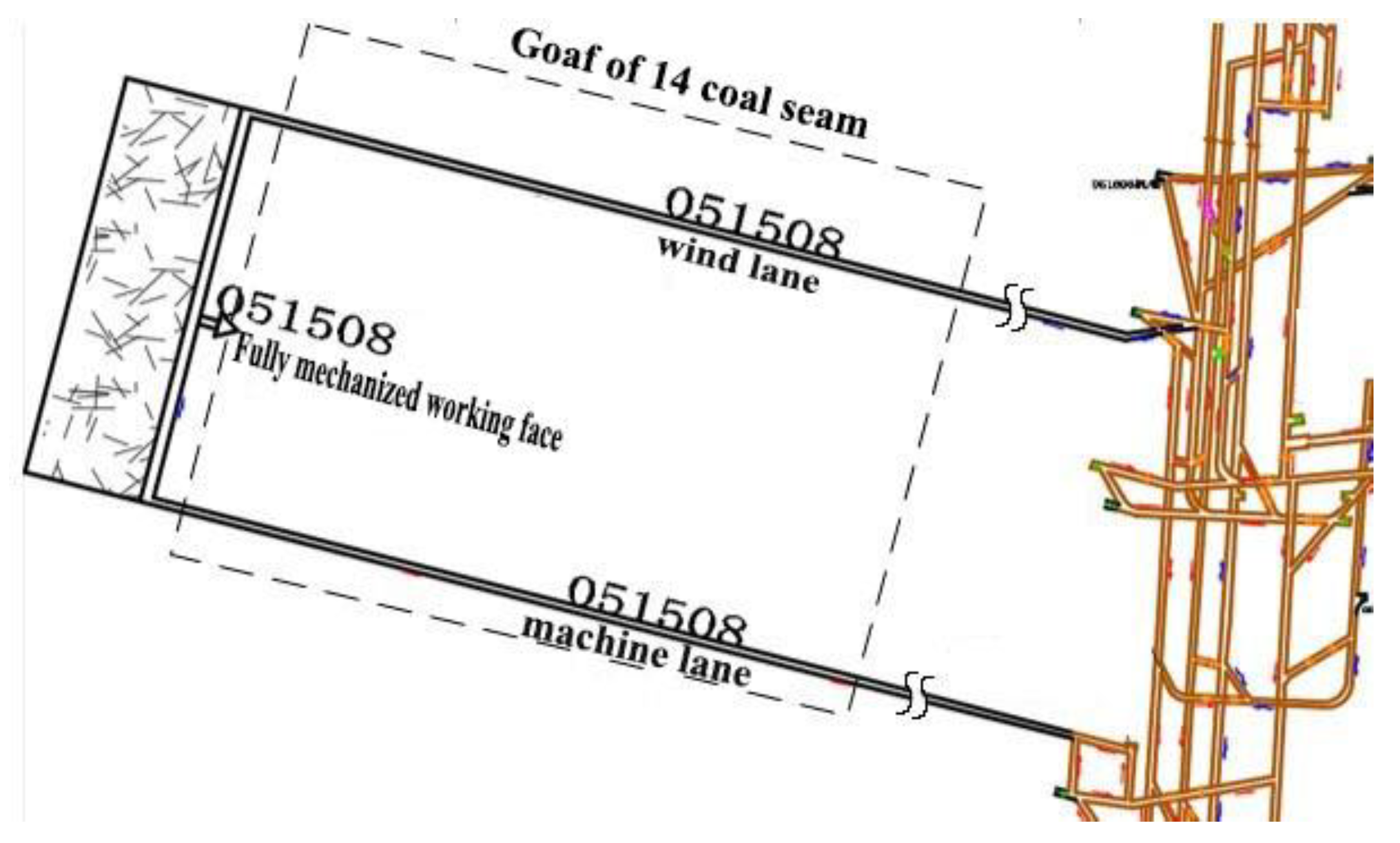 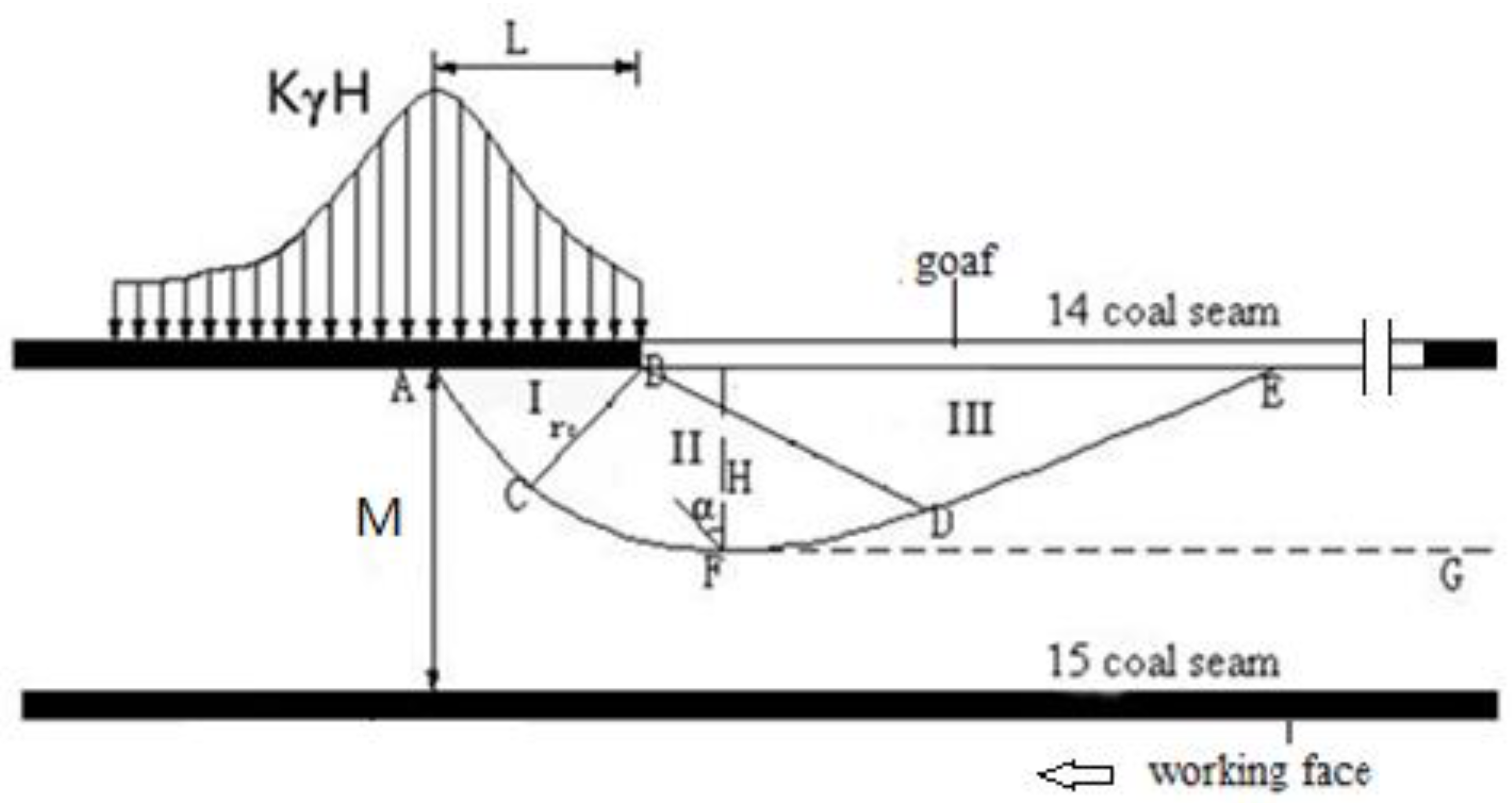 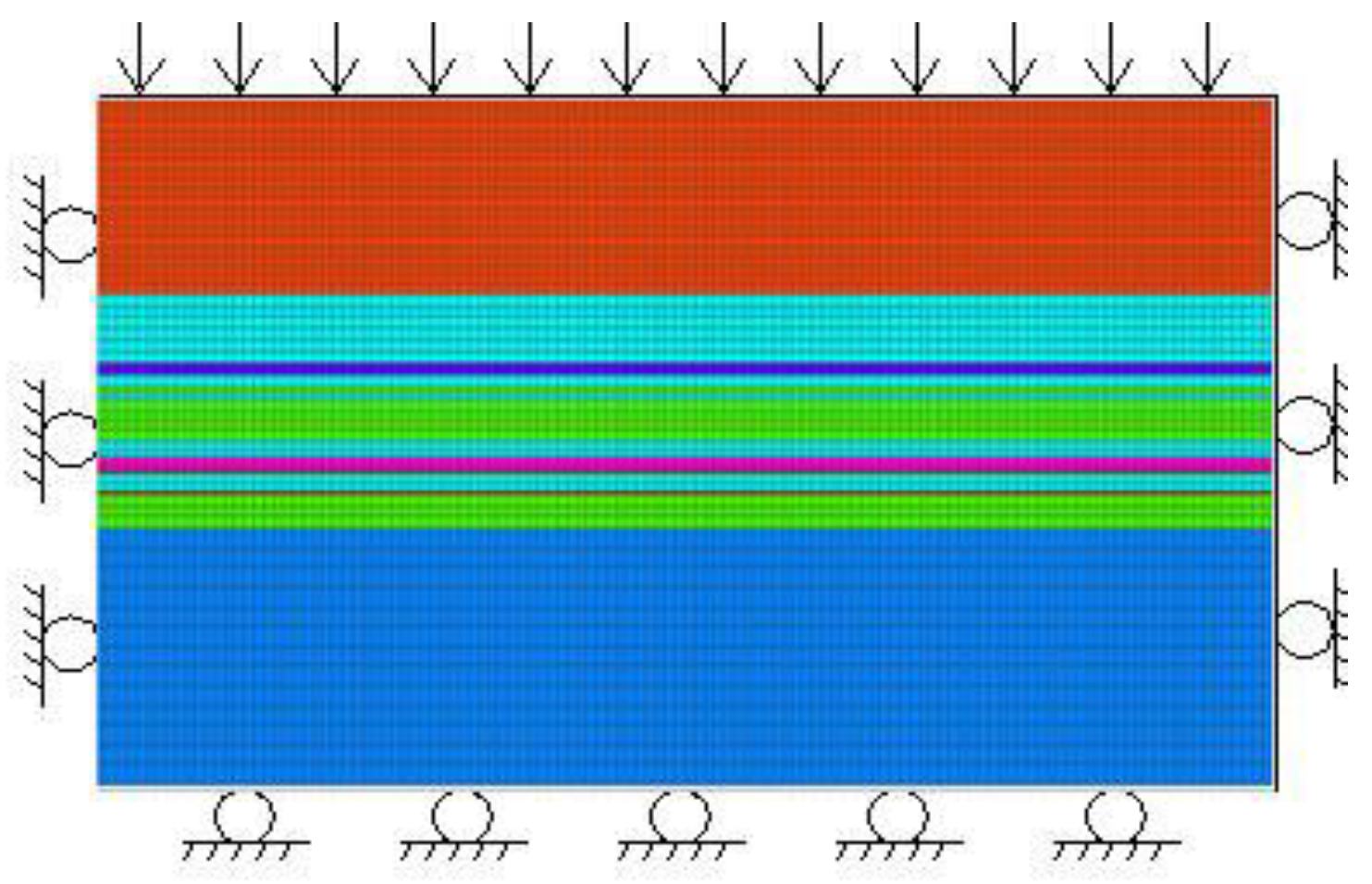 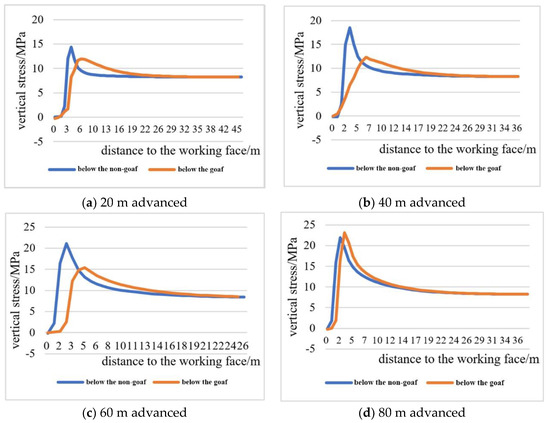 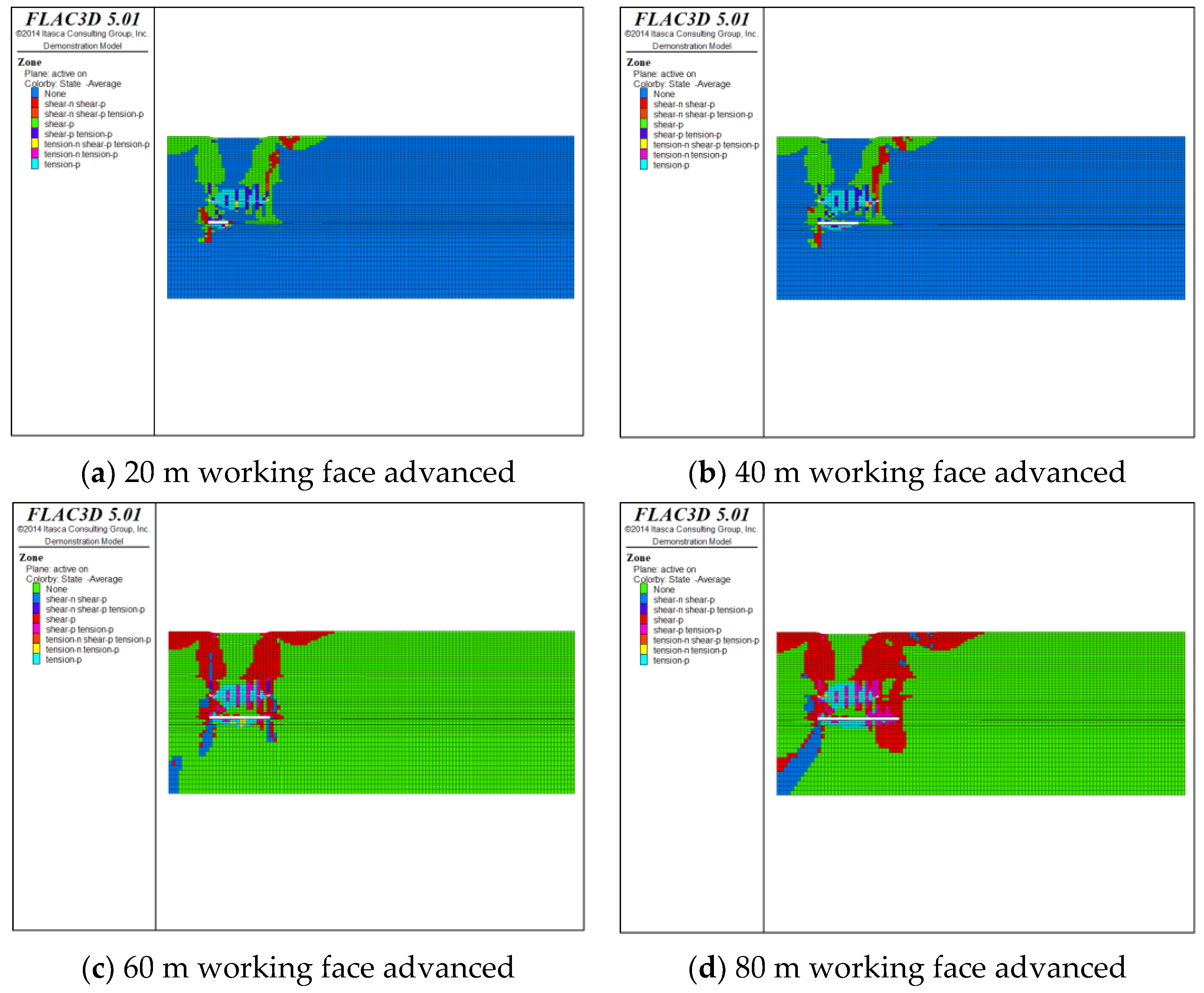 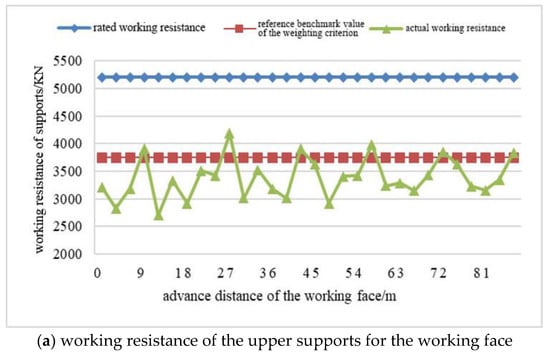 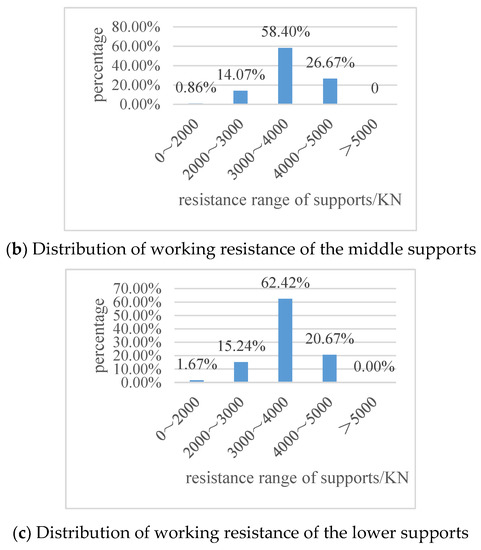 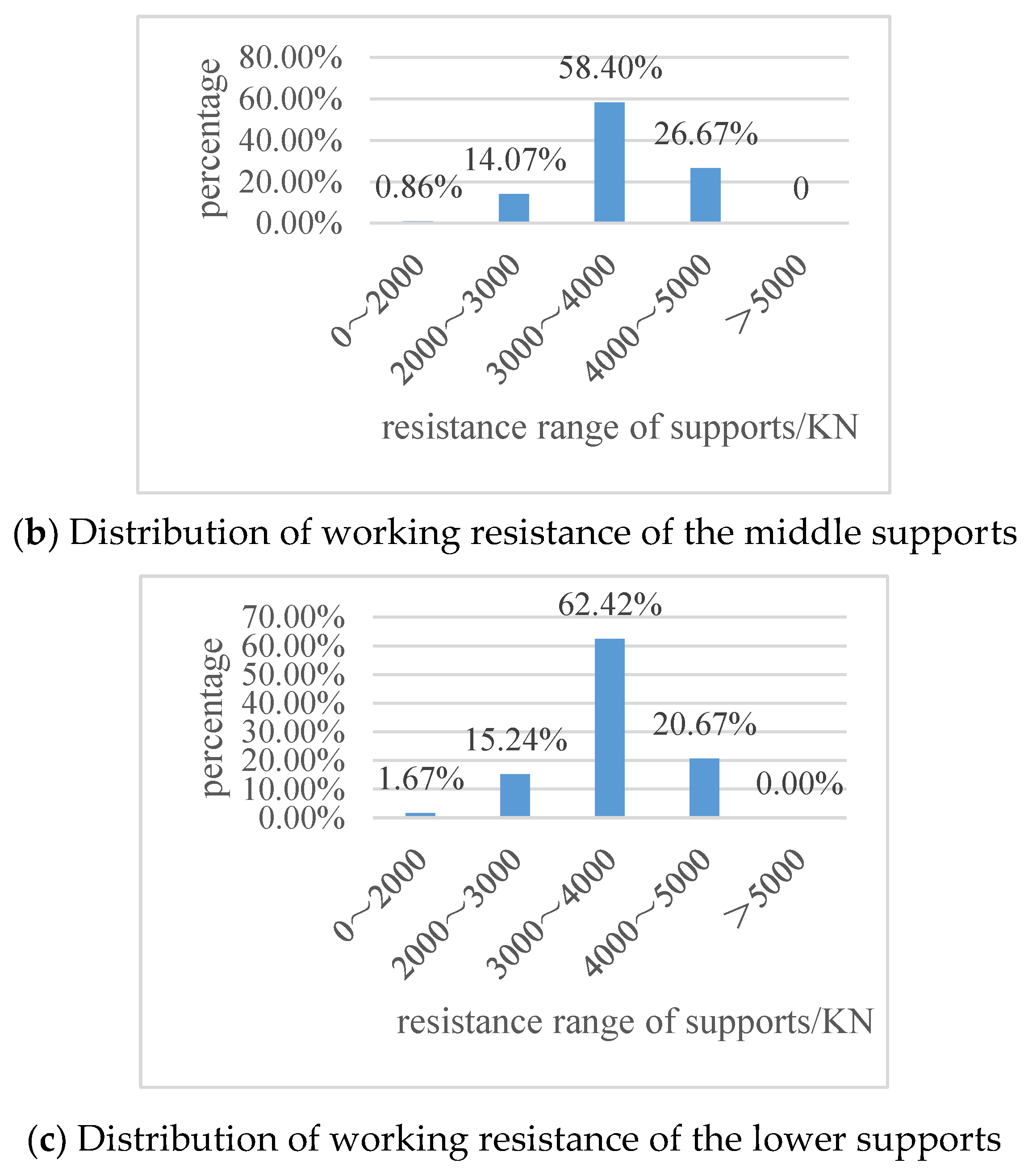 Table 4. Weighting of the 051508 working face roof.
Table 4. Weighting of the 051508 working face roof.
© 2020 by the authors. Licensee MDPI, Basel, Switzerland. This article is an open access article distributed under the terms and conditions of the Creative Commons Attribution (CC BY) license (http://creativecommons.org/licenses/by/4.0/).
We use cookies on our website to ensure you get the best experience. Read more about our cookies here.
Accept
We have just recently launched a new version of our website. Help us to further improve by taking part in this short 5 minute survey here. here.
Never show this again