Sorting gangue from raw coal is an essential concern in coal mining engineering. Prior to separation, the location and shape of the gangue should be extracted from the raw coal image. Several approaches regarding automatic detection of gangue have been proposed to date; however, none of them is satisfying. Therefore, this paper aims to conduct gangue segmentation using a U-shape fully convolutional neural network (U-Net). The proposed network is trained to segment gangue from raw coal images collected under complex environmental conditions. The probability map outputted by the network was used to obtain the location and shape information of gangue. The proposed solution was trained on a dataset consisting of 54 shortwave infrared (SWIR) raw coal images collected from Datong Coalfield. The performance of the network was tested with six never seen images, achieving an average area under the receiver operating characteristics (AUROC) value of 0.96. The resulting intersection over union (IoU) was on average equal to 0.86. The results show the potential of using deep learning methods to perform gangue segmentation under various conditions. View Full-Text
Keywords: coal and gangue; U-Net; feature extraction; segmentation coal and gangue; U-Net; feature extraction; segmentation
►▼ Show Figures 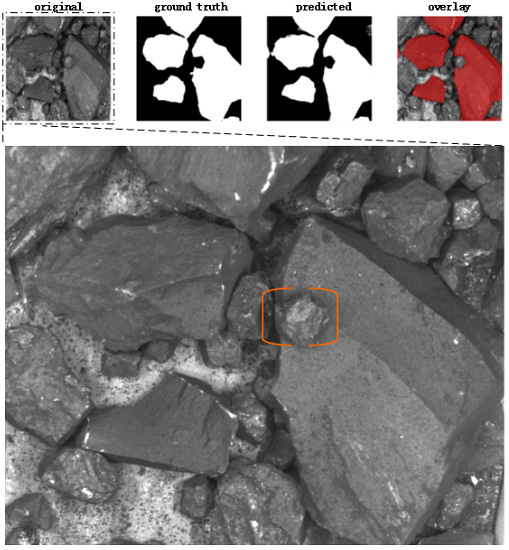