This paper presents results based on direct experimental measurements of tangential (Et) and normal (En) E-field components along the stress grading system (SGS) of a real stator bar (Roebel type) for different AC 60 Hz applied voltages. These measurements were made with a new electro-optic system allowing for the study of both spatial distributions of two E-field components along the bar and their temporal evolution at critical points. The results obtained allowed us to calculate the correlation between the distribution of En and Et along the SGS. In particular, it was demonstrated that the En distribution presents a characteristic minimum, which can be used to identify the zone of partial discharge inception. Moreover, it was possible to observe an enlargement of the Et component distribution followed by a saturation in magnitude with the applied voltage increase. Moreover, the results have demonstrated that the waveform of the En component is mostly affected by the SG material used, producing a greater distortion in its waveform than those obtained for the Et component. The more significant distortion was obtained at the end of the outer corona protection (OCP) material, corresponding to the first maximum of the En component and characterized by the appearance of a third harmonic of large amplitude. View Full-Text
Keywords: stress-grading system; stator bar; normal and tangential E-field components; electro-optic sensor stress-grading system; stator bar; normal and tangential E-field components; electro-optic sensor
►▼ Show Figures 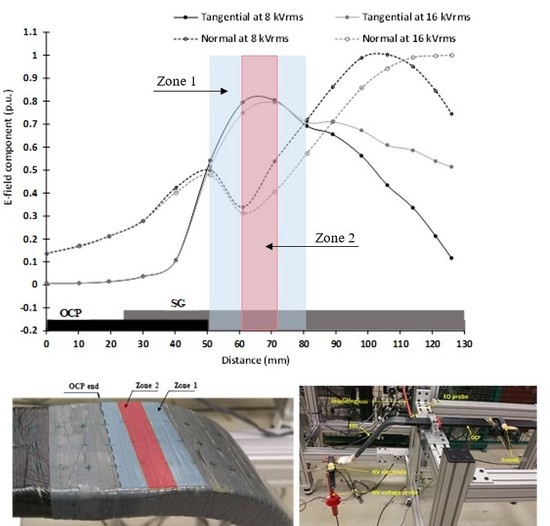 
Koné, Gbah, Christophe Volat, Claude Hudon, and Simon Bernier. 2020. "Experimental Investigation of the Spatial and Temporal Evolution of the Tangential and Normal E-Field Components along the Stress Grading System of a Real Stator Bar" Energies 13, no. 3: 534. https://doi.org/10.3390/en13030534