In this paper, the design process of brushless DC (BLDC) motor adopting the dual rotor structure that can reduce the overall size of the motor while generating the same torque as the conventional permanent magnet BLDC motor is analyzed. A simple size is selected by obtaining the torque per rotor volume (TRV), and a method of matching the counter electromotive force by selecting the pole-arc of the magnet through a magnetic equivalent circuit is analyzed. Since the efficiency is low because the 120-degree commutation method is selected, the middle stator is optimized through detailed design through the experimental design method. Afterwards, it has the advantage of being able to shift without stopping due to the characteristic of a dual rotor. For this, an analysis of the driving characteristics for each mode is performed.
Keywords: BLDC; dual rotor; magnetic equivalent circuit; operation mode BLDC; dual rotor; magnetic equivalent circuit; operation mode

A permanent magnet brushless DC (PM BLDC) motor has many advantages, such as high weight-to-torque ratio, high efficiency, excellent control characteristics, and high power density, so it has replaced the existing DC motor in many fields. Since there are no mechanical contacts, there is no mechanical noise. In general, BLDC motors are designed in an internal rotor type, an external rotor type, and a disk type. The time and energy required to stop and start the motor are generated as losses. When considering a variable speed application, it can be intuitively understood that this phenomenon acts as a loss. The dual rotor type proposed in this paper is capable of shifting without stopping because there are rotors on the outside and inside. It is also possible to change the maximum driving speed according to the driving mode [1,2,3].
Research on the design of BLDC motor with a dual rotor has already been discussed and developed by many researchers. Study on the theory of injecting harmonics to improve torque capacity [4], application of magnet or rotor skew to improve torque ripple [5,6,7], study on applying magnet segmentation [8], and research to reduce harmonics of back electromotive force (EMF) are being actively conducted [9,10].
However, more discussion is needed to solve the design difficulties because of difficult fabrication and low efficiency due to dual rotor characteristics [11,12,13]. Therefore, this paper aims to complete the basic design process for dual rotors through magnetic equivalent circuits, electromagnetic field finite element analysis, and optimization techniques, and finally realizing high torque density, high efficiency, and miniaturization.

2. Analysis on the Basic Design of a BLDC Motor with a Dual Rotor

3. Analysis on the Efficiency Improvement of the BLDC Motor Using a Dual Rotor

In the previous session, we selected and designed an appropriate pole-arc to pole-pitch ratio of a BLDC motor with a dual rotor through a magnetic equivalent circuit. After that, research on improving the efficiency of the motor is required. In general, the BLDC control method selects a 120-degree operation. It is selected because it is a simple ON/OFF operation with low switching loss, but it causes a large torque ripple, which causes the efficiency to decrease. In this paper, to improve the efficiency, we analyze the motor design aspect. In general, the motor operates due to an armature reaction between the magnetic flux generated by the current of the stator and the magnetic flux generated by the magnet of the rotor. In this paper, we discuss a design that generates optimal efficiency by reducing the core loss in the stator by using the experimental design method. In order to make a complementary design, the areas where the influence of the core loss is large are identified through a core loss separation analysis. Rotor losses are ignored. This is because the rotor experiences a DC magnetic field, so the core loss is not large. The core loss is caused by the change in magnetic flux density over time, and the effect of the core loss can be understood by observing the magnetic flux density saturation. Since the permanent magnet is located on the external rotor, there are many magnetic fluxes generated by this magnet. In other words, it is expected that much core loss will occur in the external rotor teeth.
Figure 7 shows the analysis of core loss separation. For the analysis of core loss separation, it shows the separation in three stages, as shown in Figure 7a. As expected, the magnetic flux density on the outer tooth or yoke side is high, as shown in Figure 7b. That is, it is advantageous to increase the width of the external stator teeth and the width of the yoke in order to achieve efficiency improvement through reduction of core loss. Table 3 shows the analysis results of core loss separation.
The core loss is large in the yoke area and the outer rotor tooth side. Now, with the results of the core loss separation analysis, the design of stator teeth, width, and yoke proceeds with the design for the smallest core loss through the experimental design method, as shown in Figure 8. It is designed in detail by checking the point where the maximum efficiency comes out according to the tooth and yoke width.

Figure 9 is a comparison of the torque waveforms of the BLDC motor with a dual rotor structure and the conventional one rotor structure, through simulation. Figure 9a shows the torque waveform for the dual rotor type BLDC motor, which was designed in detail through the experimental design method after selecting the best ratio of the magnet with the magnetic equivalent circuit. The torque generated by the internal rotor is 52.84 mNm, and the torque generated by the external rotor is 167.7 mNm, and the sum of the total torque is 220.54 mNm. Figure 9b shows the torque waveform of a BLDC motor with one rotor structure applied. It can be seen that it generates the same torque with a slight error of 2 mNm. Through this, it is verified that it achieved a reduction in volume of 45.6% compared to the existing model.
Figure 10 is a waveform comparing the back EMF between the no-load lines derived through simulation and experiment when the external and internal rotors simultaneously rotate at 1000 rpm. Figure 10a is the waveform of the no-load back EMF derived at 1000 rpm through the test, which is 56.66 Vrms, and Figure 10b shows the no-load back EMF waveform with 58.64 Vrms derived from the BLDC motor design based on the self-equivalent circuit. It is well-designed, showing an error rate of 3.38%.
Figure 11 shows the three operation modes by adopting the dual rotor structure, which can change various speeds through outer and inner rotor control. Due to its dual rotor structure, it consists of an outer shaft mechanically connected to the outer rotor and an inner shaft mechanically connected to the inner rotor. These two shafts are coaxial. When two axes rotate at the same time, high torque can be generated, and when only one axis rotates, low torque is generated. Mode 1 can generate high torque at low speed because the external and internal rotors rotate simultaneously. Mode 2 only operates the external rotor. The torque decreases, and the back electromotive force decreases. Since there is room for back electromotive force, the speed can be further increased. Mode 3 drives only the internal rotor. The torque is the lowest, and the back electromotive force is very low. Since there is much room, the speed can be increased even more. Table 4 shows the maximum speed and torque values that can be achieved within the limit of back EMF for each mode 215.6 Vrms, and the torque waveform for each mode over time is shown in Figure 12. 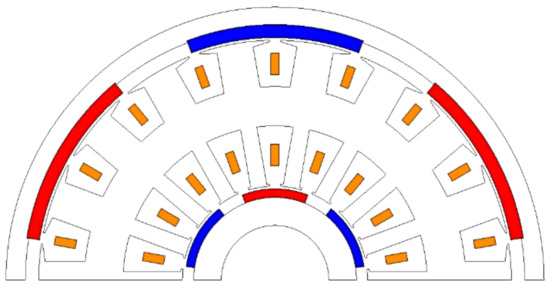 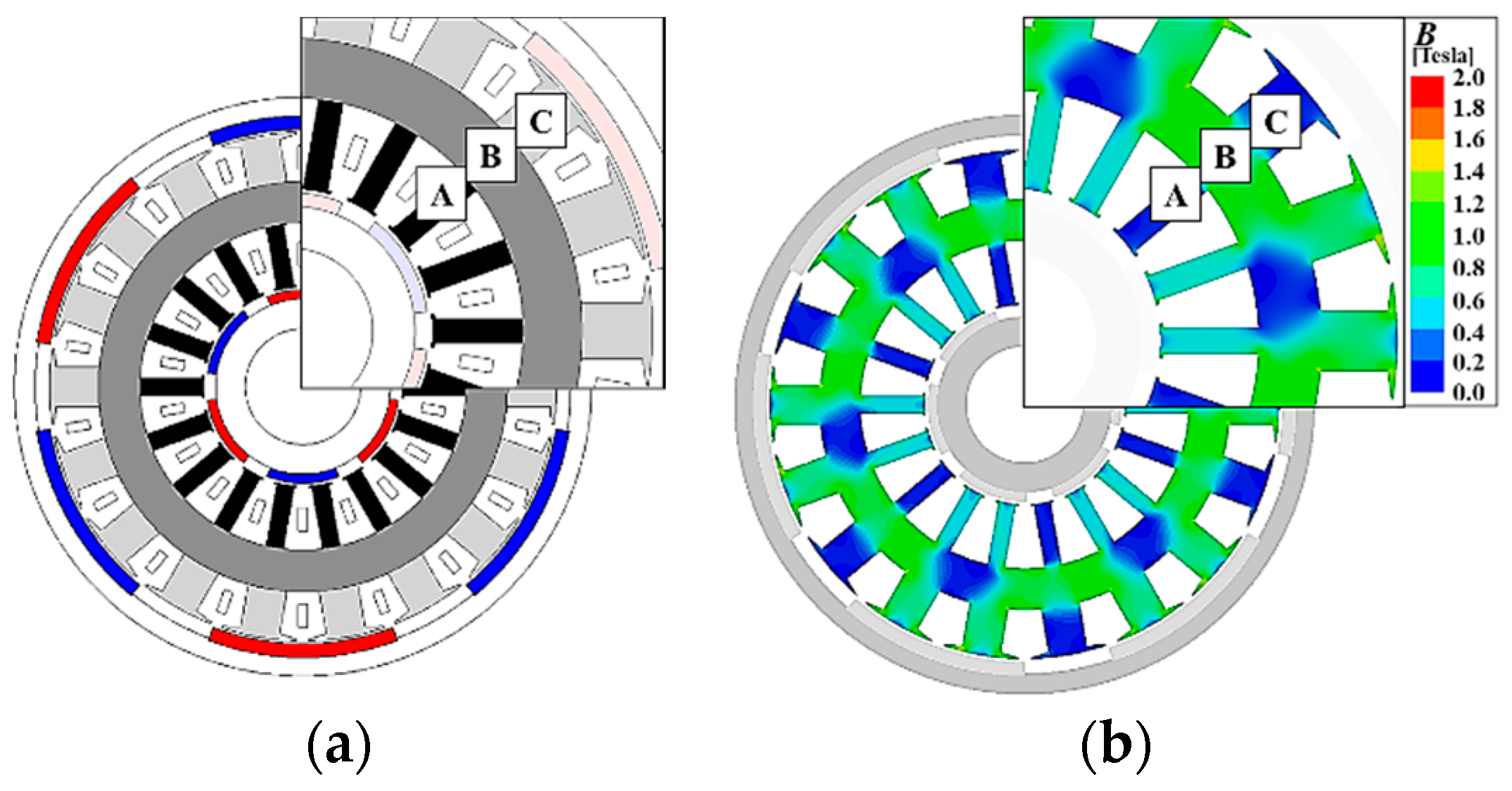 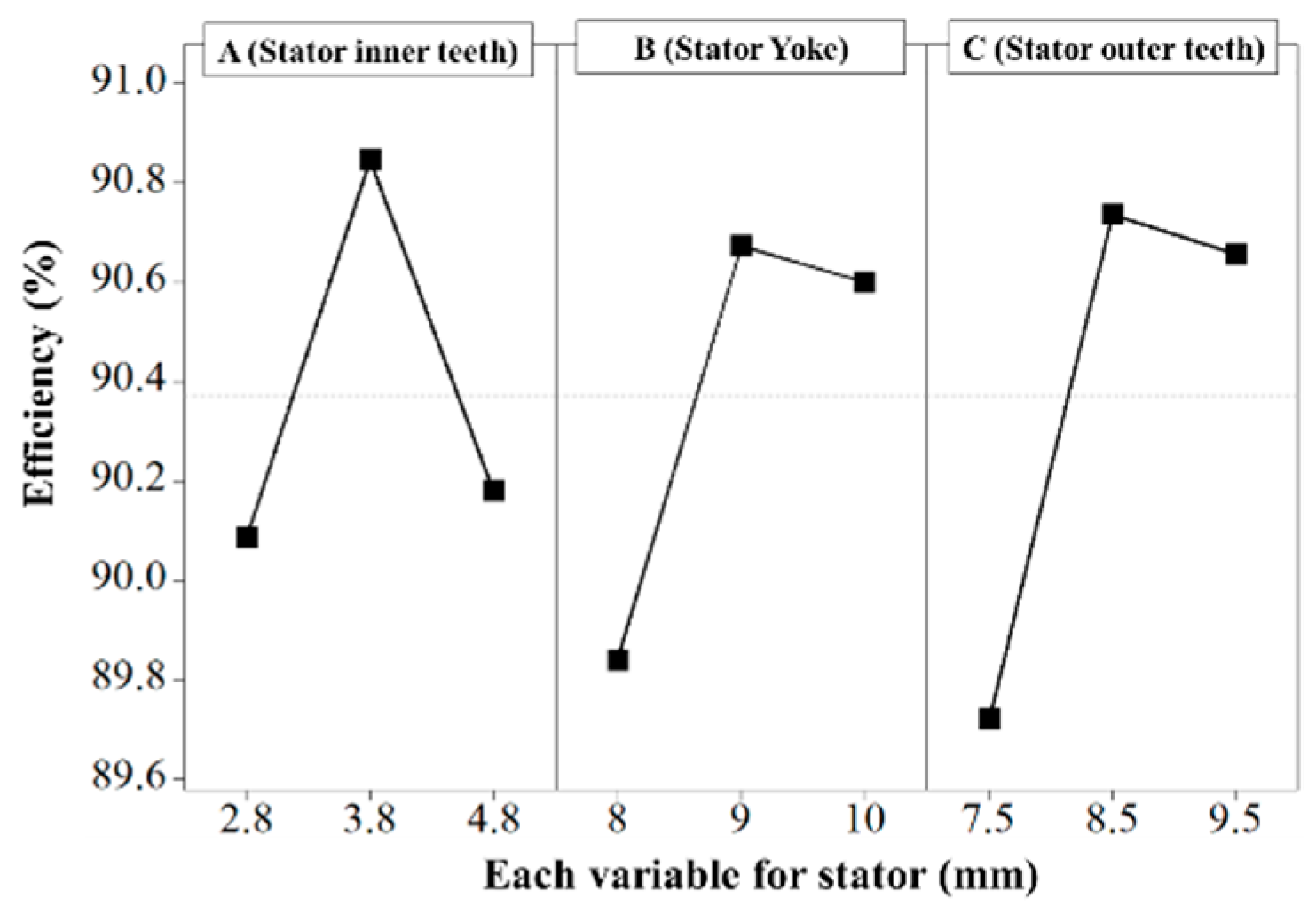 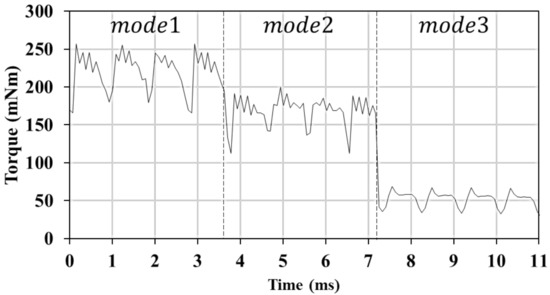