The Mathematical Model for the Secondary Breakup of Dropping Liquid

Aerosol is a multiphase system, created as a result of the dispersion of a liquid in a gaseous medium. The atomized liquids are most often water and fuel; however, they can be any other substance. Even a small addition of a substance that changes the rheological properties (i.e., the nature of the flow) can change the properties of the resulting aerosol. The most important parameters that characterize the aerosol are the outflow rate, the droplet diameter, the spray spectrum, and the spray angle. The latter is important when selecting atomizers, especially those working in groups on the sprayer boom. The spray angle is an important parameter of the atomization process, providing a great deal of information about the quality of the spray. This study presents the results of rheological tests and the atomization of aqueous solutions with varying concentrations of sodium carboxymethylcellulose (Na-CMC). We found that the spray angle decreased with increasing Na-CMC concentration in the solution, which is attributable to an increase in shear viscosity. The design of the atomizer is also important. The largest spray angles were obtained for an atomizer with a diameter of 0.02 m and with the inlet port being placed at an angle to the atomizer axis. Based on the experimental results for various liquids and atomizer designs, a correlation equation describing the spray angle is proposed.
Keywords: atomization; spray angle; construction of atomizer; sodium carboxymethylcellulose; rheology atomization; spray angle; construction of atomizer; sodium carboxymethylcellulose; rheology

The most important elements of the experimental setup for atomizing liquids were: pressure-swirl atomizers of various designs, Krohne Messtechnik VA 40 liquid rotameters with measuring ranges of 0.5–5, 4–40, 25–250, and 100–1000 dm3/h, an organic glass tank filled with liquid and equipped with a CHI 2-30 pump by Grunfos Poland, a coil, a Center 309 digital thermometer by Center, a Canon EOS-1D Mark III camera with a strobe lamp, and a computer. A simplified diagram of the experimental setup is shown in Figure 1. Due to the lack of adaptation of the rotameters used to measure the flow rate of liquids other than water, it was necessary to scale them each time. This consisted of measuring the weight of the flowing liquid over a specific period of time. For this purpose, a WLC 10/A2 electronic scale from Radwag with an accuracy of 0.1 g was used. The flow rate of the liquid was regulated with poppet valves from Italinox. The flow rate range was from 0 to 250 dm3/h. The tests were carried out at a liquid temperature of 293 ± 1 K.
The test used pressure-swirl atomizers with the following designs:
The diameter of the inlet port in each case was dp = 0.0025 m. The atomizers are shown in Figure 2. The most important geometric values of these atomizers are shown in Table 1. The dimensional tolerance for the diameter and length of the orifice was ±50 μm, while for the diameter and height of the swirl chamber it was ±100 μm.
In order to determine the spray angle, the standard lens setting was used. The photos were taken against a black background in order to obtain the clearest possible contour of the stream. The ISO sensitivity was set to 1000 at a shutter speed of 1/10 s. The Image-Pro Plus software from Media Cybernetics was used for the spray angle analysis. In order to determine the spray angle, after loading a given photo into the program, the spray angle as the measured value had to be selected first, and then two lines limiting the atomized liquid stream had to be drawn. The program automatically gave the value of the spray angle. The accuracy of the spray angle measurement was ±4°.
To measure the shear viscosity, a Physica MCR 501 rotary rheometer from Anton Paar was used. The test used a cone–plate system of CP60-1-SN21572 type with a slit (d = 121 μm) in the shear rate range from 51 to 1019 1/s. A Peltier system was used to stabilize the temperature with an accuracy of ±0.01 °C. A K9 tensiometer from Krüss GmbH in the surface tensions measurements was used. The du Noüy method was used.
The test polymer was sodium carboxymethylcellulose (Na-CMC) with a molecular weight of 700,000 and a degree of substitution DS = 0.90, manufactured by Sigma-Aldrich. The physicochemical properties of the tested liquids are summarized in Table 2.

In the case of non-Newtonian fluids, the simplest mathematical rheological model is the Ostwald–de Waele power model with the form: where τ is the shear stress, is the shear rate, k is the consistency coefficient, and n is the characteristic flow index.
Figure 3 shows the dependence of shear viscosity in the aqueous solutions of sodium carboxymethylcellulose, which showed the characteristics of non-Newtonian fluids. The dynamic viscosity decreased with increasing shear rate in the tested range. The shear viscosity increased with increasing polymer concentration in the solution. The effect of the Na-CMC concentration at low values of was more pronounced than at high values of [22]. This may be explained by the fact that a higher concentration of Na-CMC increases the number of polymer chains per unit volume, thereby shortening the distance between polymer chains and enhancing the strength of intermolecular entanglement [23]. If the shear rate applied is small, the network between the chains is relatively stable and is difficult to destroy. If the shear rate applied is high, the convoluted Na-CMC chains are stretched, and the entangled chains’ structure can easily be broken as described by Chen et al. [24].

Given the obtained results, we conclude that the spray breakdown manner and the spray angle are dependent on the viscosity of the liquid. The spray angle values decreased with increasing Na-CMC concentration (increasing viscosity). The spray angle was also significantly influenced by the atomizer geometry—especially the location of the inlet connector and the diameter of the swirl chamber. The use of an angular inlet port, as compared to a port perpendicular to the axis of the atomizer, improved the spraying process. Larger spray angles were also obtained when using an atomizer with a smaller swirl chamber diameter. Based on the research results, a correlation equation was proposed to determine the spray angle tangent depending on the Reynolds number and the atomizer geometry.

The scientific results presented in this article were obtained within the research project funded by the Ministry of Science and Higher Education of Poland. 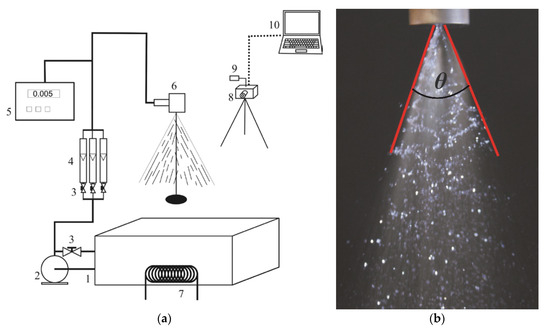 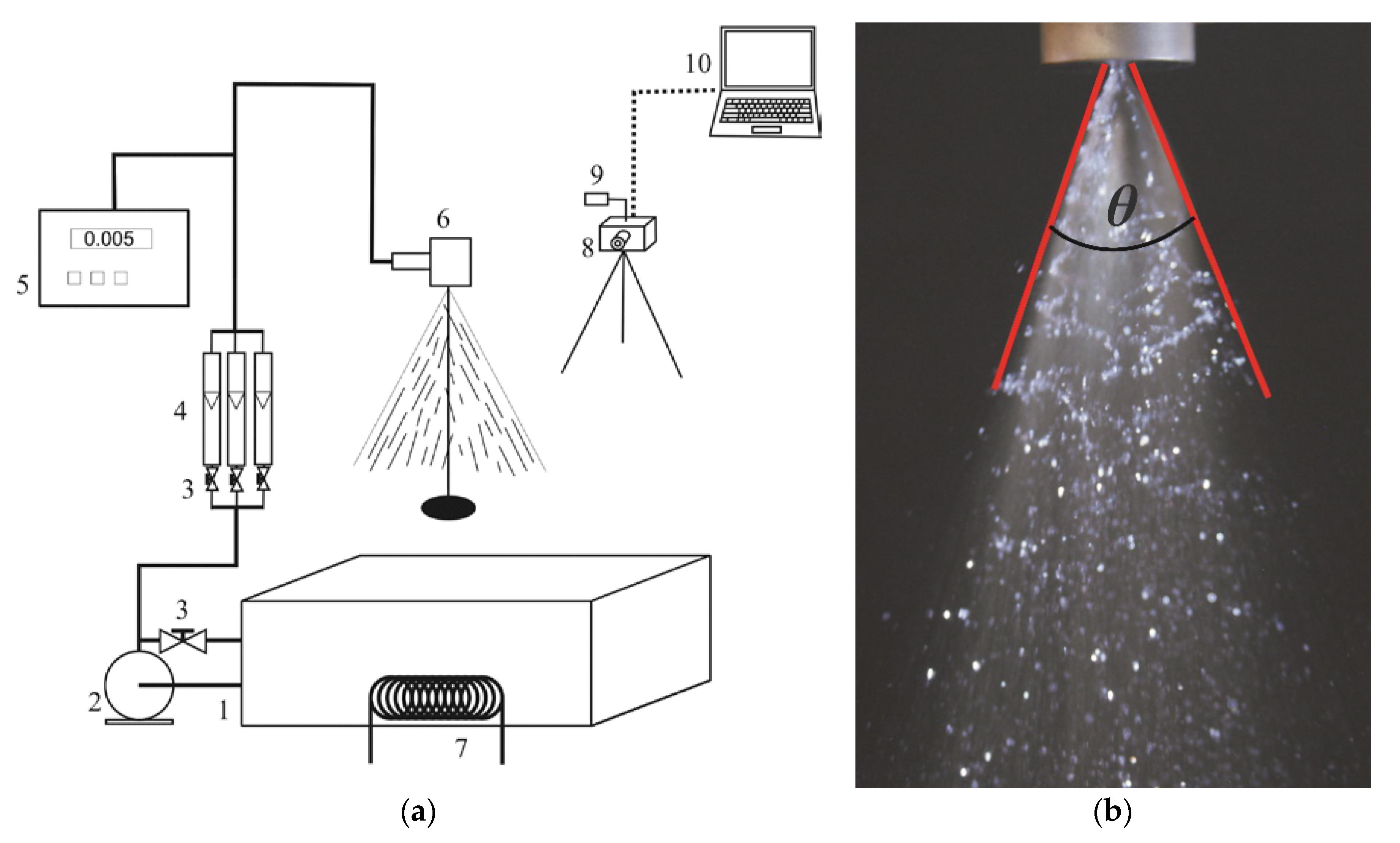 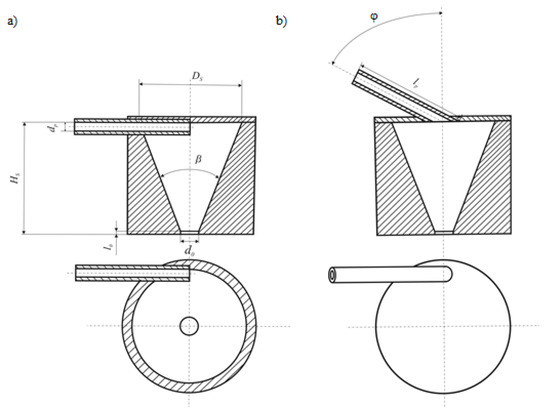 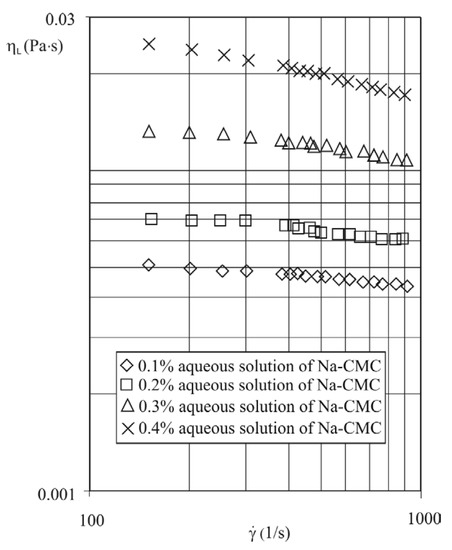 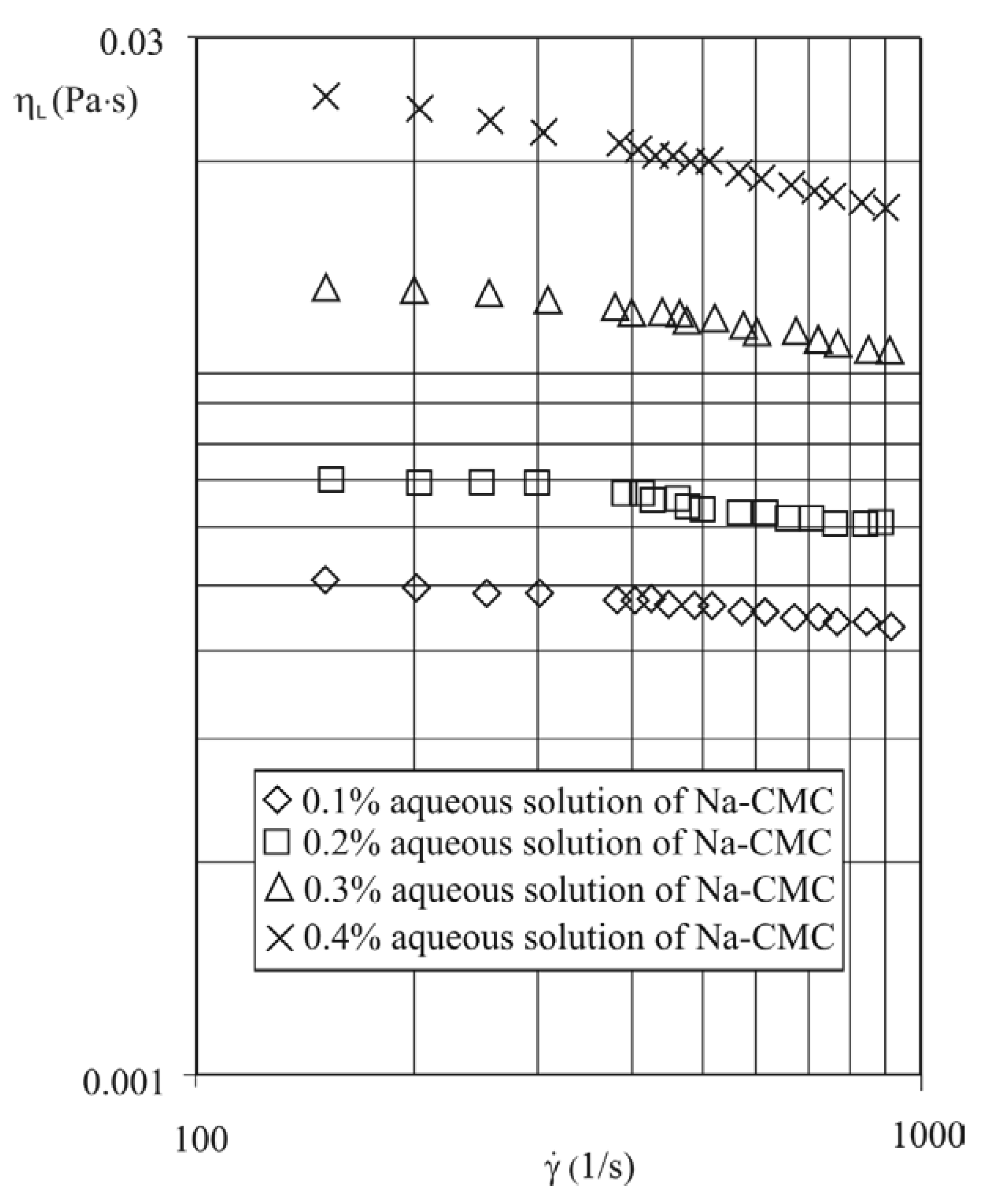 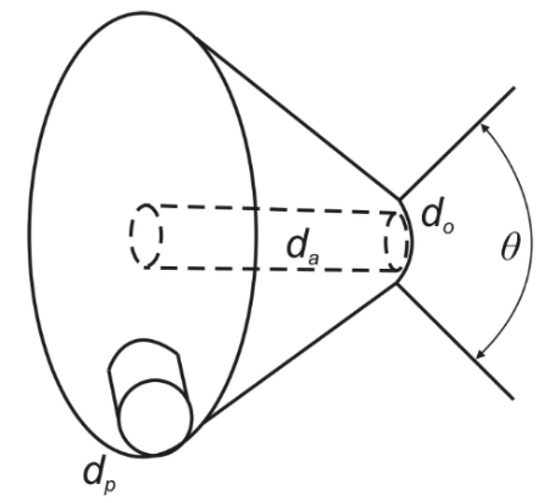 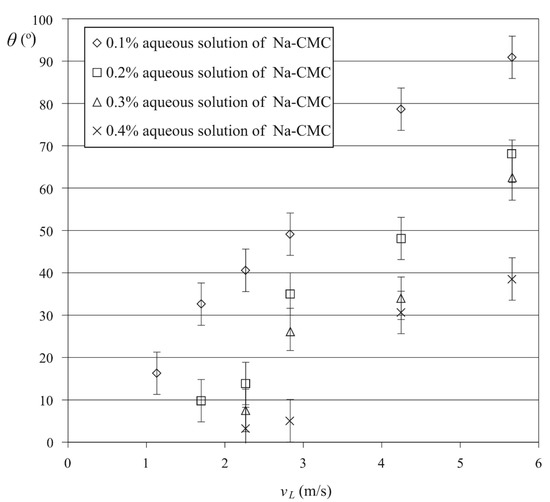 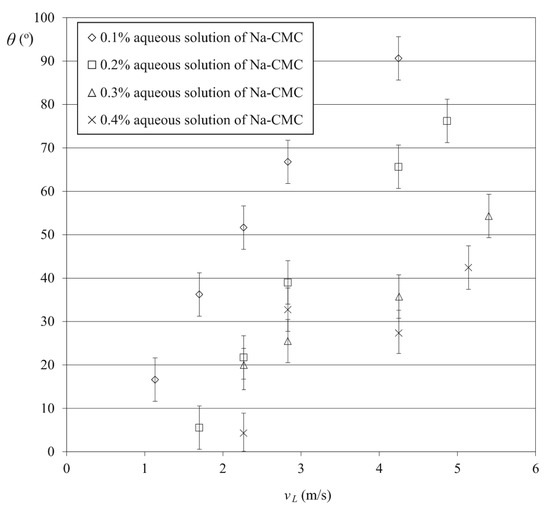 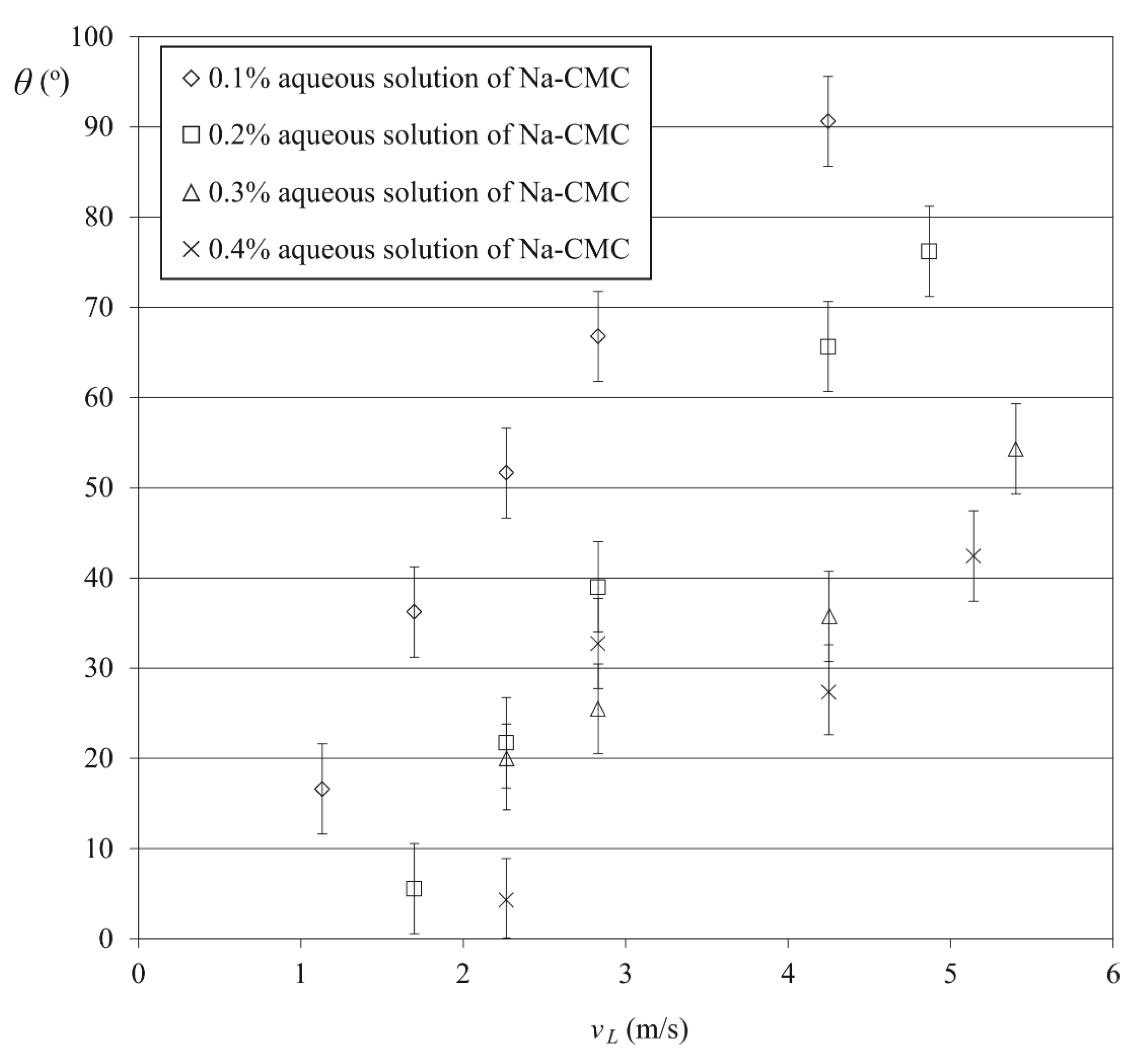 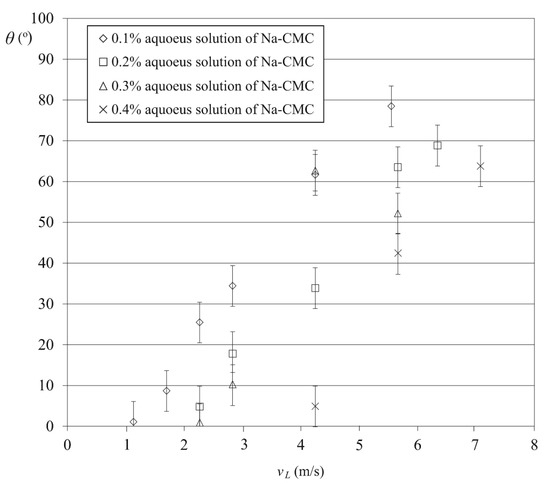 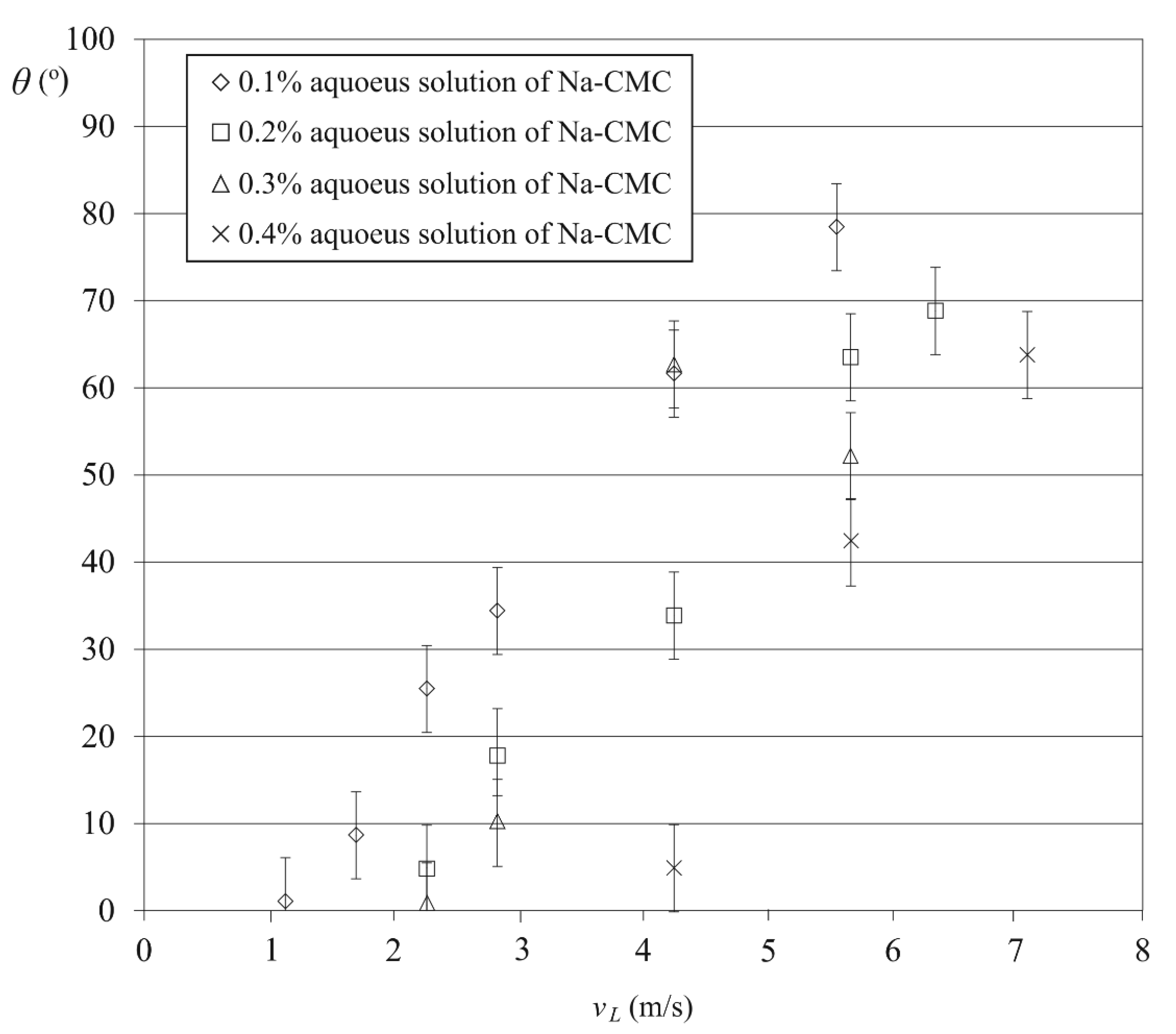 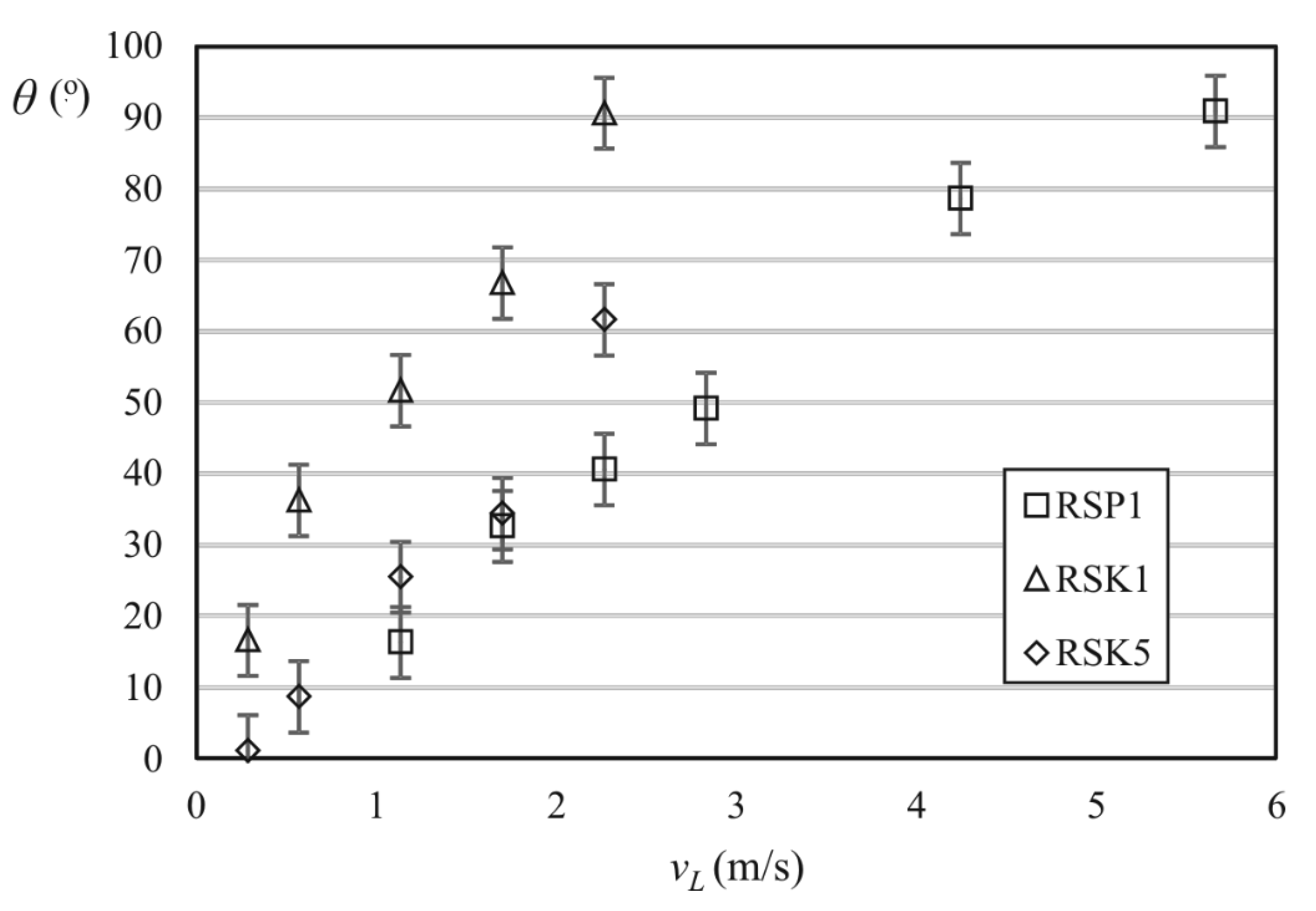 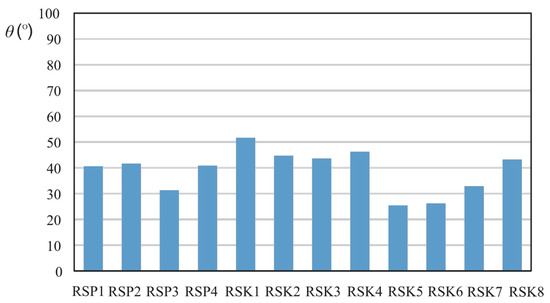 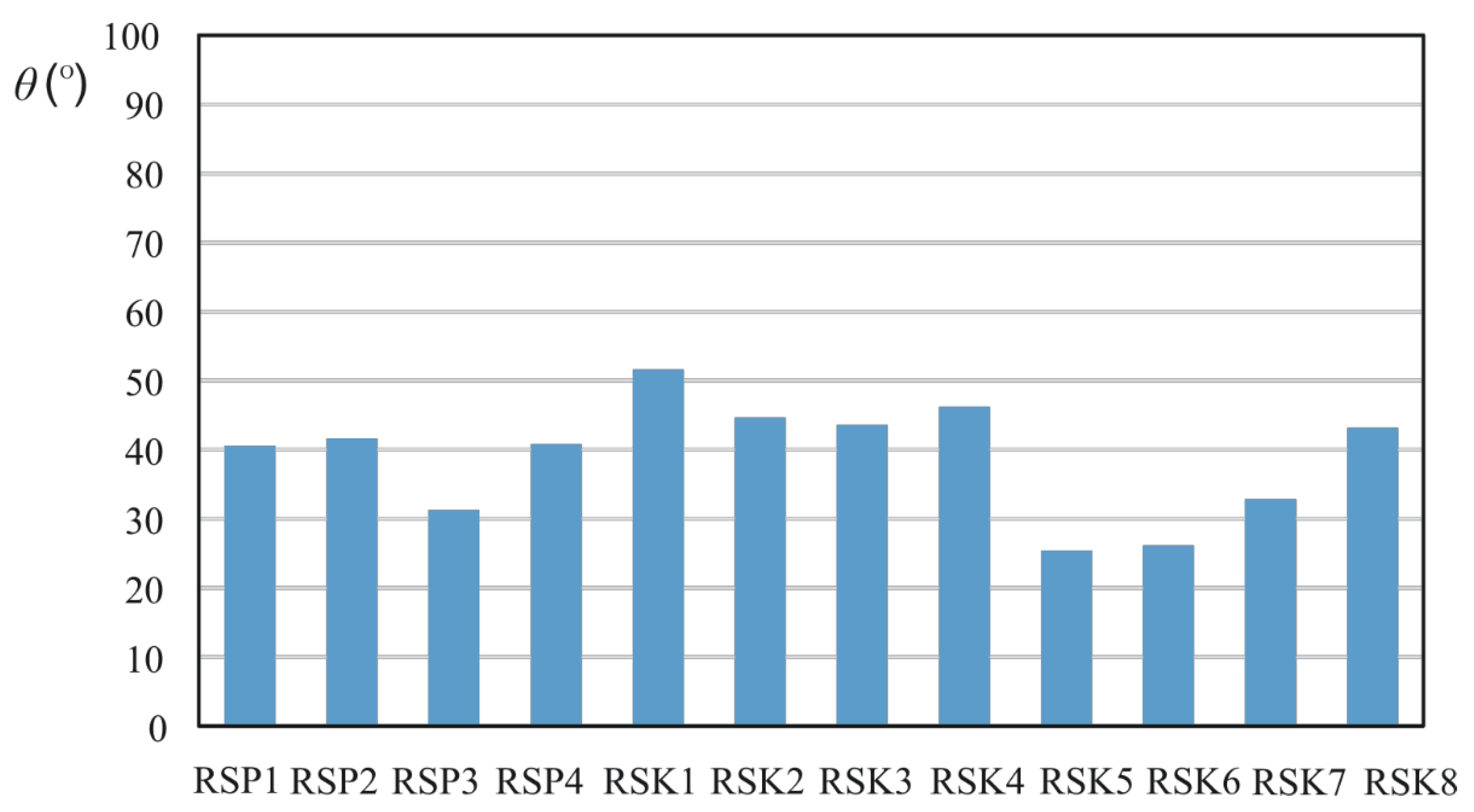 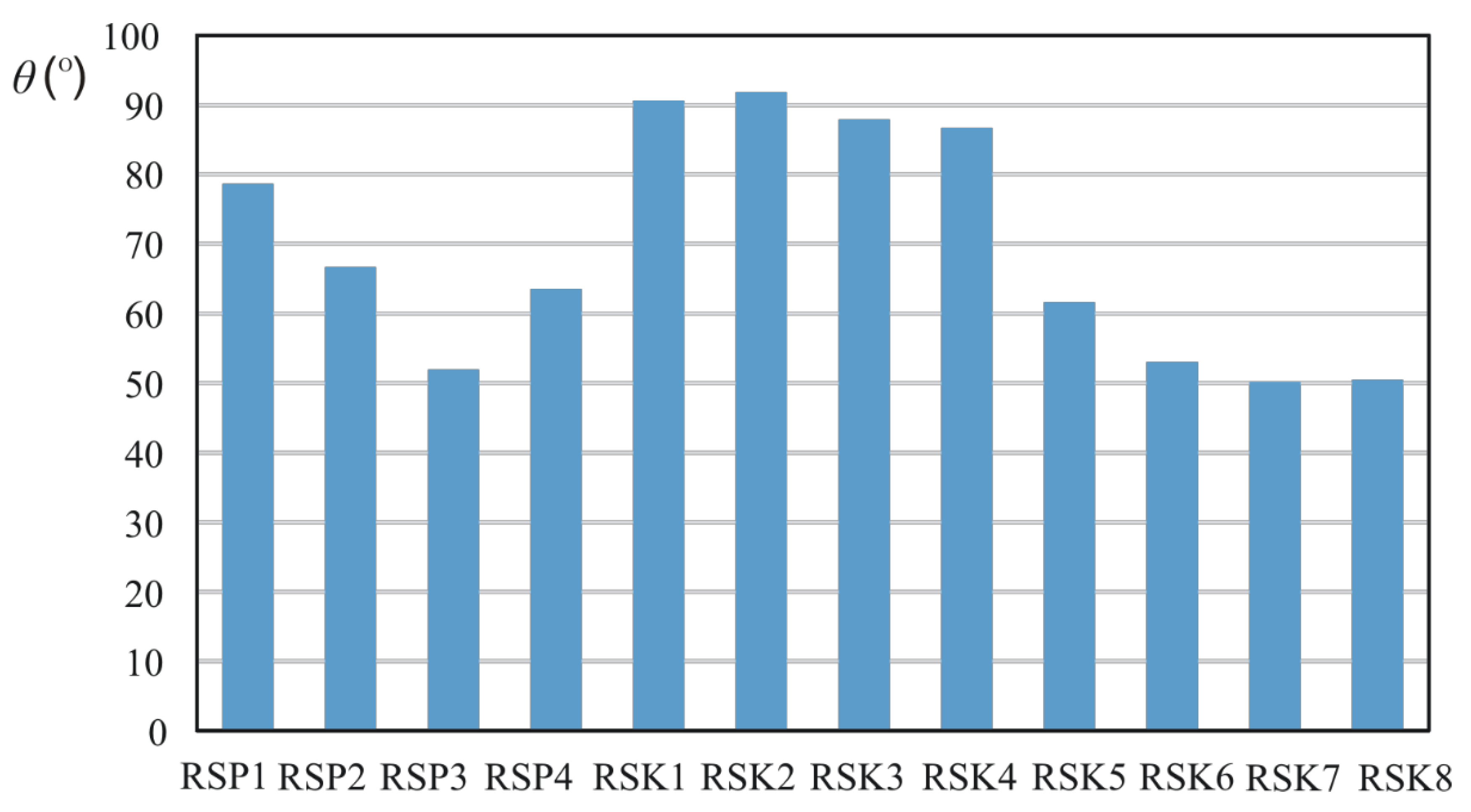 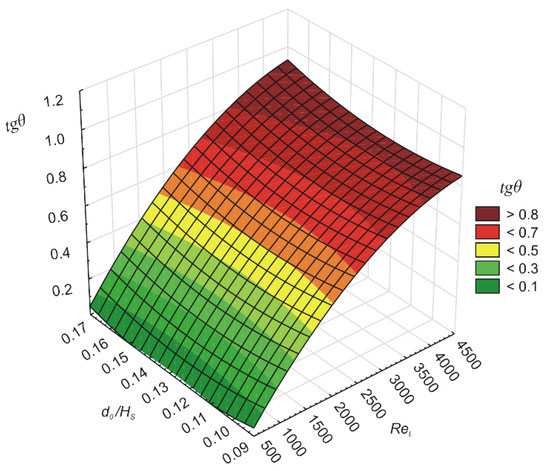 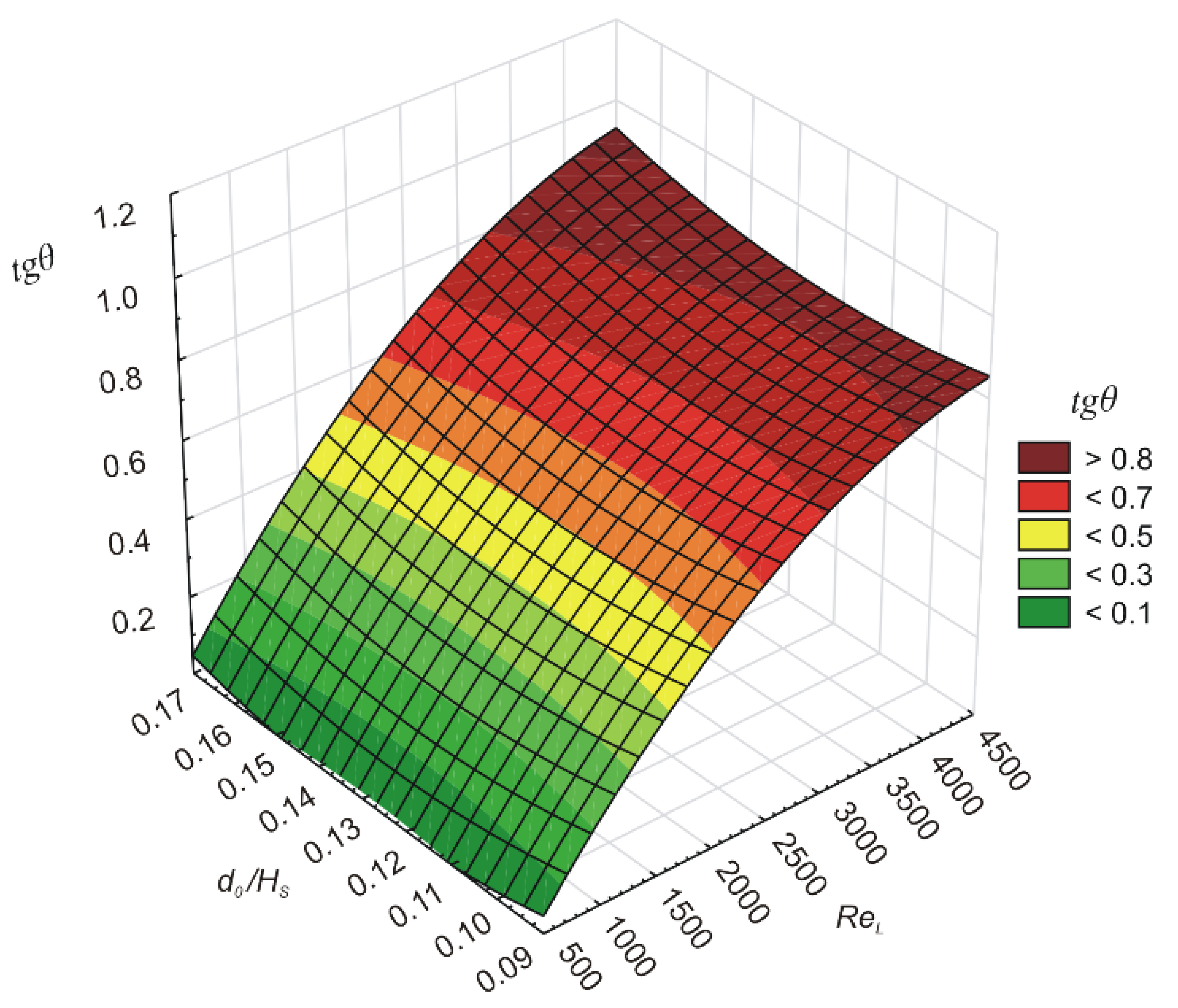 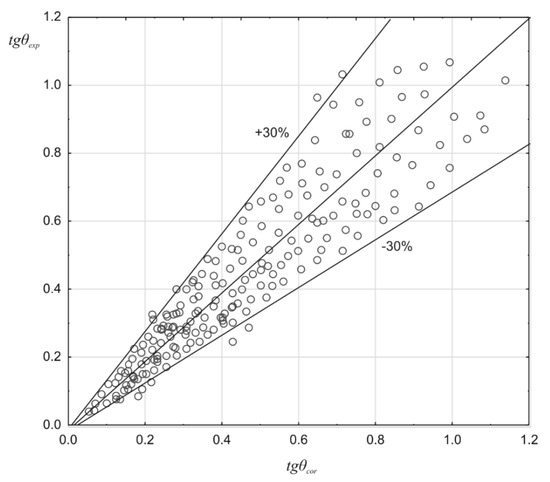 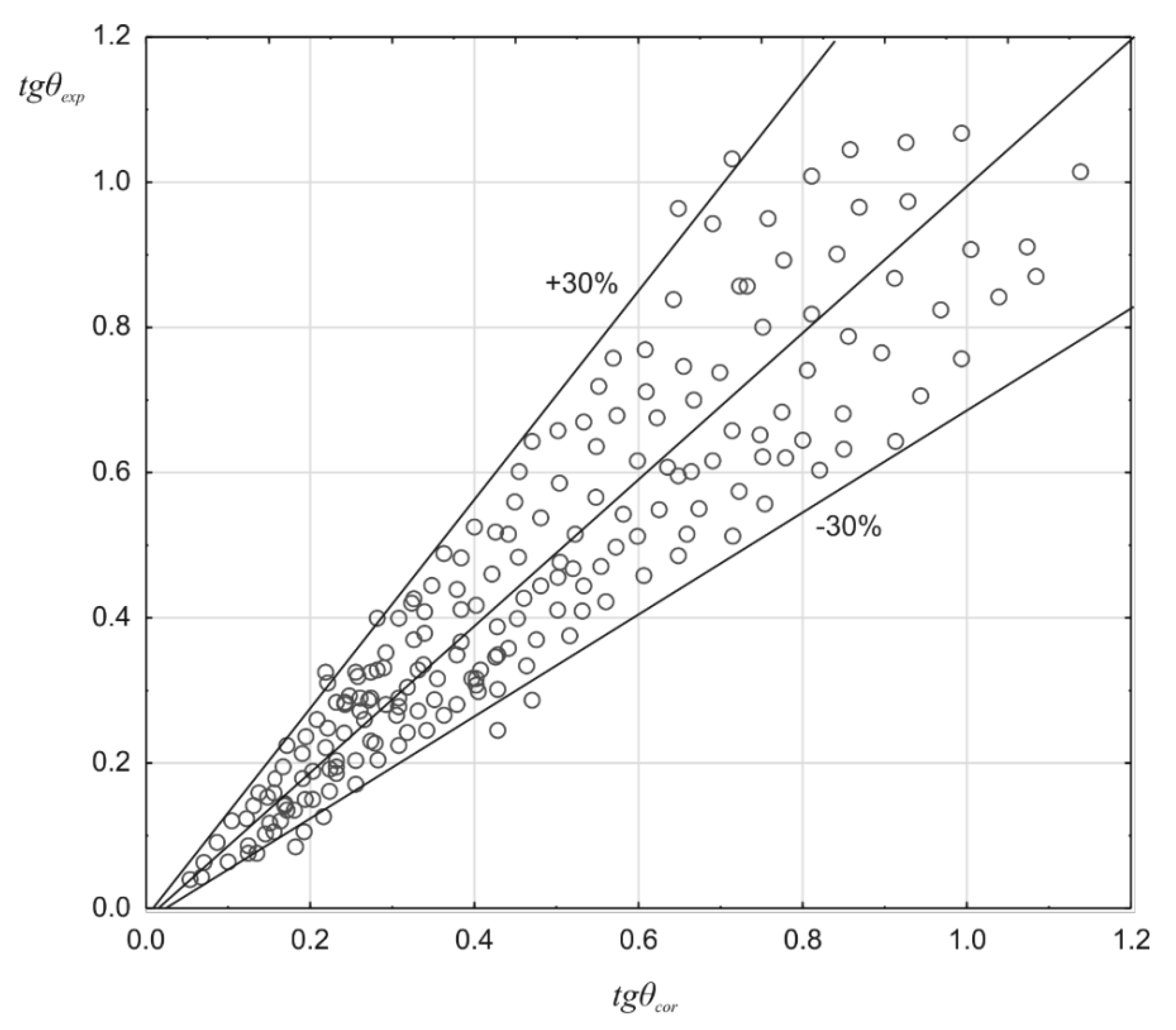 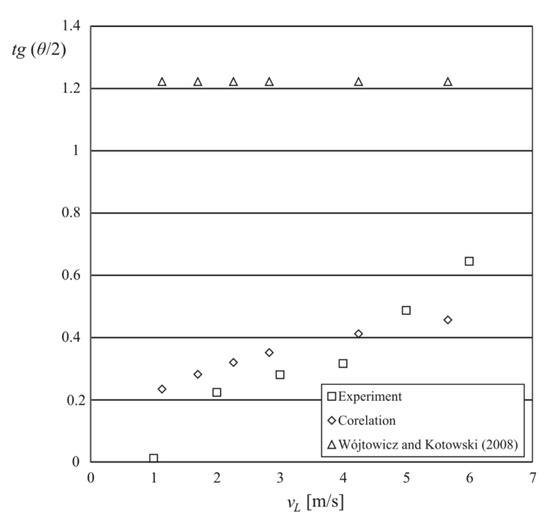 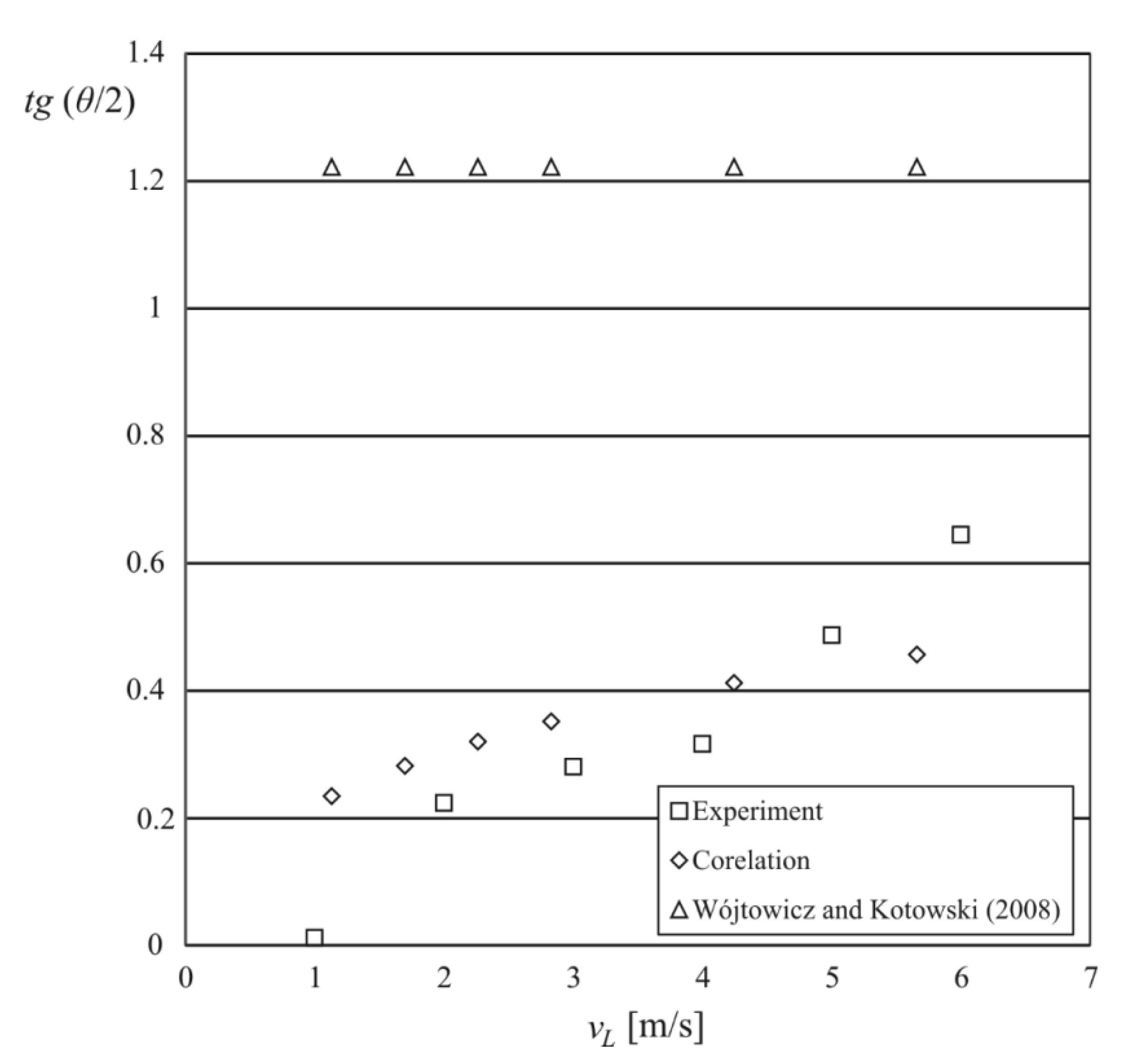 Table 2. Properties of tested solutions.
Table 2. Properties of tested solutions.
© 2020 by the authors. Licensee MDPI, Basel, Switzerland. This article is an open access article distributed under the terms and conditions of the Creative Commons Attribution (CC BY) license (http://creativecommons.org/licenses/by/4.0/).
We use cookies on our website to ensure you get the best experience. Read more about our cookies here.
Accept
We have just recently launched a new version of our website. Help us to further improve by taking part in this short 5 minute survey here. here.
Never show this again