An Operational Approach to Multi-Objective Optimization for Volt-VAr Control

In this section, a general formulation for the VVO problem is proposed. The section begins with a general formulation of the single-objective variant. This is followed by a brief discussion on the subject of time and scenario-based optimization. Next, the formulation is extended to the multi-objective case. This formulation is based on the work in [15] but extends it considerably.
The proposed process of the modeling approach is illustrated in Figure 1. Using standard flowchart symbols, data are presented in parallelograms, and functions are presented in rectangles. From left to right, the process starts with the active and reactive native loads, and . The controls of the system are indirect and direct controls, X and Y. Using power flow mechanisms, the system state can be calculated. The system state is expressed in terms of the voltages V, the currents I, the loads P and Q and the controls X and Y. It is proposed that all target functions should be expressed using the system state . Multi-objective optimization can then be used to combine these target functions.

Let be the nodes (buses) of the network and let be the conductors (edges) of the network. Let be the native active and reactive power consumption in leaf node k, with vector notation .
Considering both indirect and direct voltage control elements, let be the indirect voltage control elements. Each control element a is associated with decision variable , where are the possible values of , with vector notation . Note that may be discrete (e.g., in capacitor banks, which can usually be connected or disconnected) or continuous (e.g., smart inverters). In either case, the function g associates the control vector and the native active and reactive power vectors with the actual active and reactive power consumption , as follows:
Similarly, let be the direct voltage controlled elements. Each controlled element b is associated with decision variable , where are the possible values of with vector notation . Note that are voltages and may also be continuous or discrete. For example, an LTC is discretely controlled, while a voltage regulator may have continuous control.
From the actual active and reactive power consumption and the direct voltage controls Y, the voltages and currents ( and ) can be calculated, as well as the total active and reactive power . This is usually done by solving the well-known power flow equations where is the admittance matrix that represents the topology; that is, is the admittance between buses m and n. After the equations are solved, the current can be easily calculated from the voltages and line admittances.
This process is denoted :
Note that the term “power flow” is used in this work, but this does not necessarily need to be the case, and any other form of voltage, current and power evaluation will suffice. For example, in some works about balanced networks, approximations are used.
For simplicity, and without loss of generality, the general single-objective VVO problem is defined as a minimization problem of a function f, under constraints: where represents any set of constraints. For example, the most common constraint is the voltage constraint , where , are vectors of the minimum and maximum allowed voltages. In the rest of this work, the shortened notation and is used to denote the target function and the constraints.

Many target functions can be easily expressed using this notation. Some common examples follow.

2.1.3. Time and Scenario Based Optimization

Having defined a general single-objective VVO problem, the multi-objective problem for N objectives simply becomes
In the next section, we will propose several manners in which the target functions can be mathematically combined.

Having defined the general MOO problem, in this section, two common techniques in which multiple target functions can be mathematically combined are discussed, namely the weighted-sum technique and the e-constraint technique.

2.2.1. The Weighted-Sum Technique and the Efficient Curve

The weighted-sum technique is probably the most widely used MOO technique in the industry. For example, it is used in [30,32,35,36].
In the weighted-sum technique, weighting coefficients are assigned to each of the objective values, thus transforming the multiple objectives into one objective. For target functions the problem is written as where denotes the weighting coefficients.
The major disadvantage of this method is that the weighting coefficients may have negligible operational sense, and therefore selecting them is not straightforward. Several methods in which the coefficients may be intuitively selected are presented below.
One special case of the technique is the monetization method, in which a price-per-unit is available for the different objectives and can be used as the obvious weighting coefficient. For example, from the VVO target functions listed in Section 2.1.1, the cost of energy and the cost of losses can typically be monetized. However, objectively monetizing voltage profiles, the reactive power or the effects of equipment operation is not a trivial task and may result in very large discrepancies (see, e.g., the large discrepancies in the evaluation of the “social cost” of CO emissions [38]).
A common variant that attempts to give the weighting coefficients a more intuitive meaning may be called the method. This involves normalizing each objective value by its range of possible values; that is, by defining Thus, . Now, optimization is done with weighting coefficients that sum to one. Namely, the optimization is used to minimize where . In the case of two target functions, , this can be written as , hence the method.
The normalized variant in Equation (22) clearly makes more operational sense, and it provides a simple intuitive meaning for the weighing coefficients as percentiles of the overall target function. However, it still does not provide any practical way to choose the coefficients.
The common solution to the problem of choosing the coefficients is to involve a decision-maker in the process of selecting the most preferable solution. Typically, this is done by first finding the “efficient curve” (i.e., the set of solutions that are optimal for some combination of coefficients). A demonstration of this concept for two objective functions, f and g, is shown in Figure 2. Each plot on this graph is projected into the objective space of a feasible solution, and the efficient curve is shown as a dashed line. No feasible solutions exist below the efficient curve, while solutions above the efficient curve are inefficient. Thus, the efficient curve represents the set of viable and efficient solutions.
This concept is closely related with the concept of the “Pareto front” (i.e., the set of solutions that are Pareto optimal, or non-dominated). The Pareto front includes solutions where there is no feasible solution that is better in all objectives, but it includes a set of solutions with different trade-offs among the conflicting objectives. Selecting between these solutions is done by imposing a set of weighing coefficients. Many methods have been proposed for finding the Pareto front—a subject which is outside the scope of this work. The decision-maker can then analyze the set of solutions and select the most preferable solution. Several tools and methodologies are available to facilitate the decision-making stage; for example, the work presented in [39,40,41,42], and the taxonomy in [43].
While the efficient curve method seems to provide the most freedom to the decision-maker, in our experience, operators find the visualization tools confusing and would rather have clearer operational meaning for their choices.

3.2. Applying the Weighted-Sum Technique for Active and Reactive Power Optimization

The weighted-sum technique with the method was applied to the feeder. Both active power and reactive power were normalized, and efficient points for every value of were calculated. The resulting efficient frontier is shown in Figure 5. Of the possible 88 operating points, 14 operating points belong to the efficient curve. The maximum value of corresponding to each point is also shown.
In a practical setting, these 14 possible control points are shown to the decision-maker and a choice is then made. While this provides the decision-maker with the most operational freedom, it does not provide an intuitive operational interpretation of the decision other than that it is “efficient”.

3.3. Applying the E-Constraint Technique for Active and Reactive Power Optimization 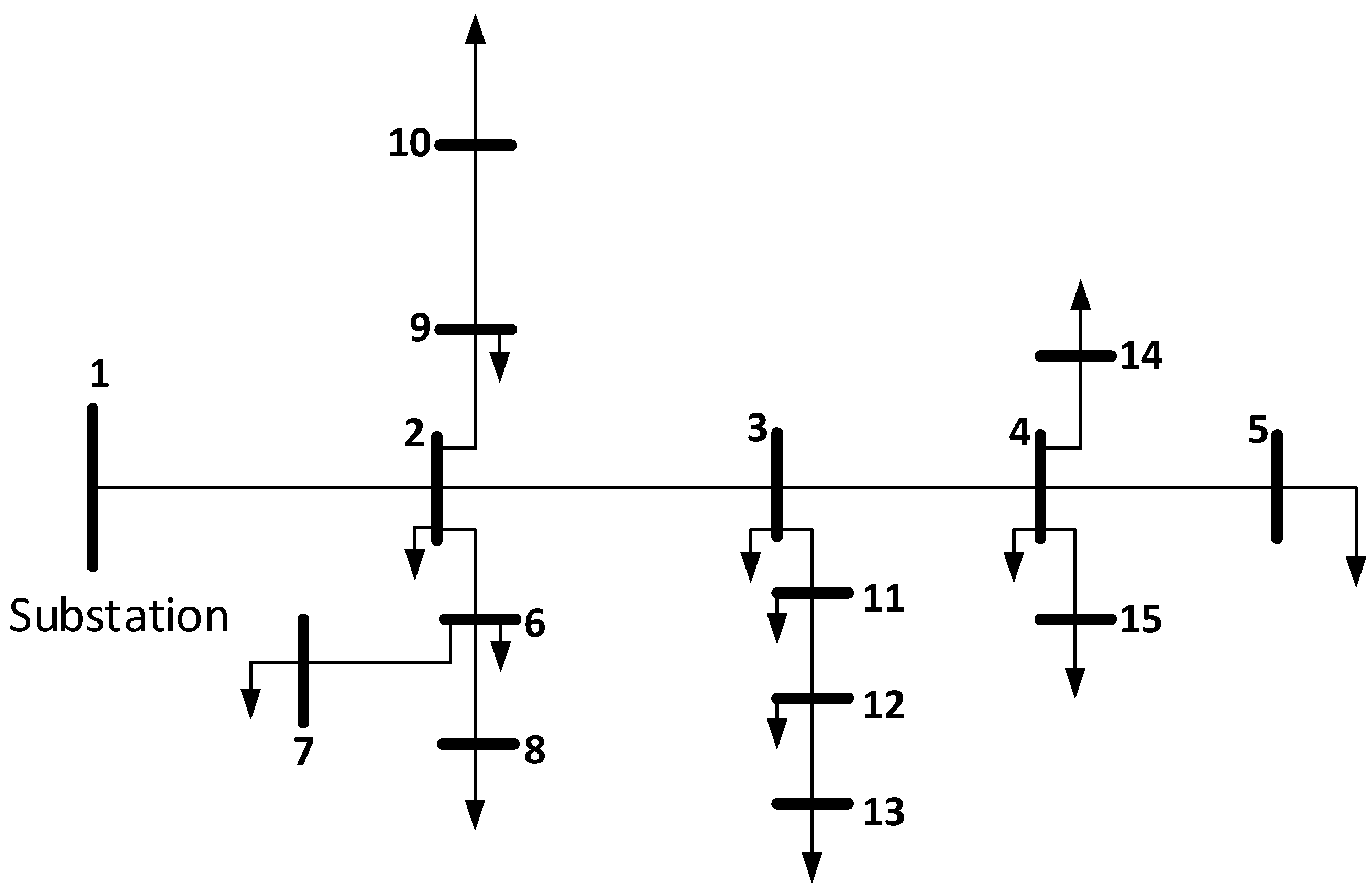 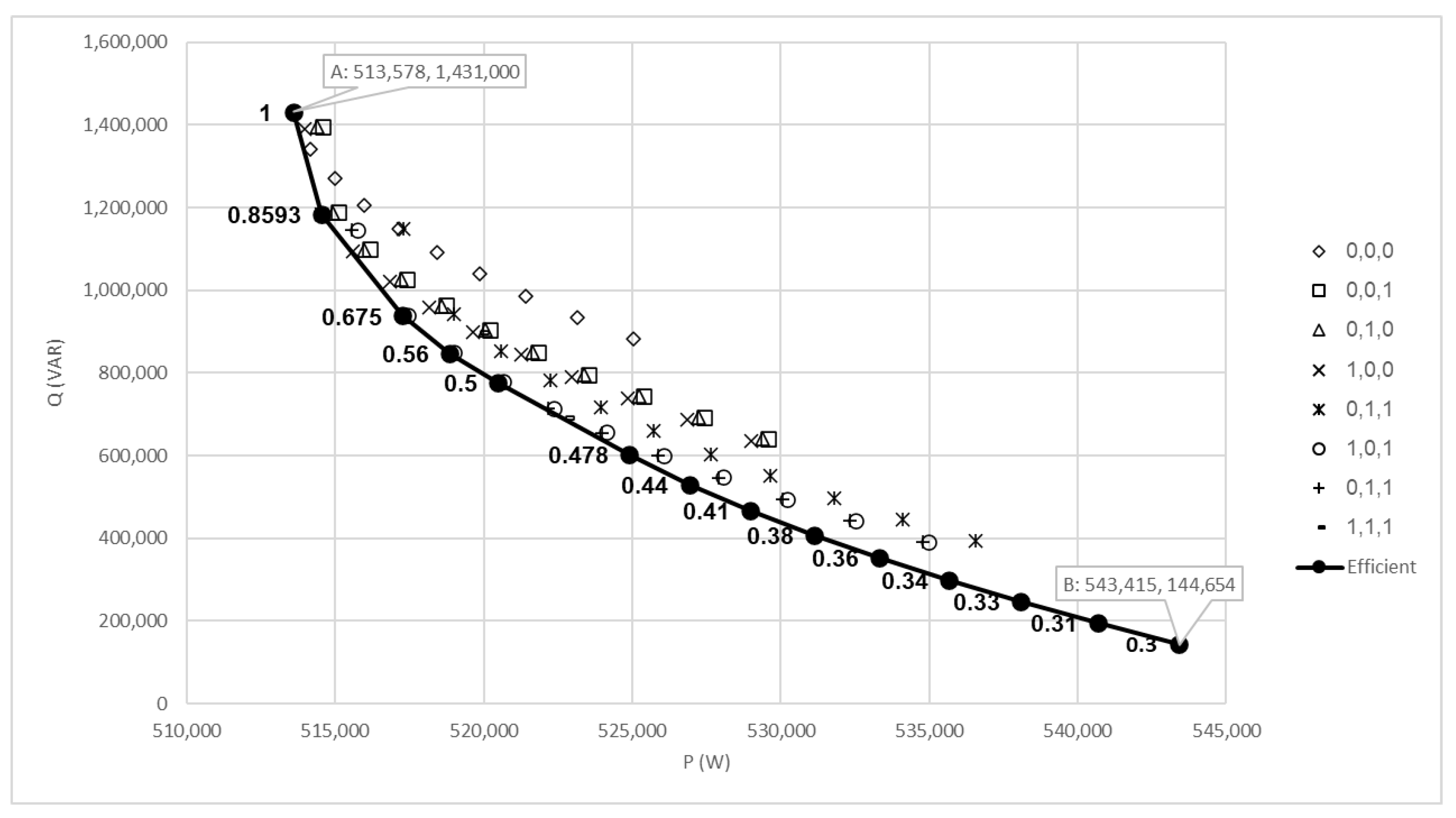 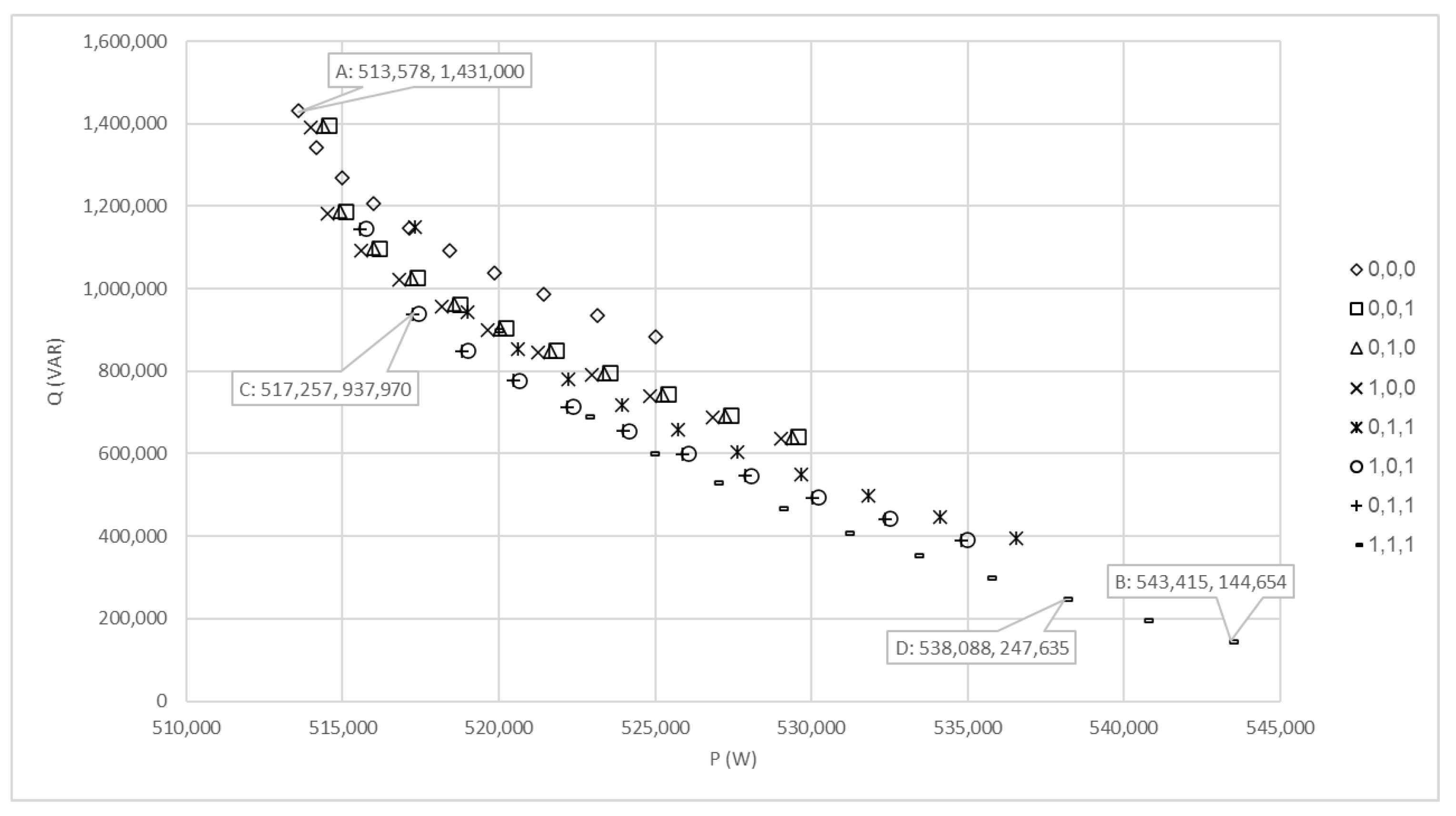