:
The EU has implemented targets to achieve a 20% share of energy from renewable sources by 2020, and 32% by 2030. Additionally, in the EU countries by 2050, more than 80% of electrical energy should be generated using non-greenhouse gases emission technology. At the same time, energy cost remains a crucial economic issue. From a practical point of view, the most effective technology for energy conversion is based on a gas turbine combined cycle. This technology uses natural gas, crude oil or coal gasification product but in any case, generates a significant amount of toxic gases to the atmosphere. In this study, the environmentally friendly power generation system composed of a high-temperature nuclear reactor HTR integrated with gas turbine combined cycle technology and cogeneration unit is thermodynamically analysed. The proposed solution is one of the most efficient ways for energy conversion, and what is also important it can be easily integrated with HTR. The results of analysis show that it is possible to obtain for analysed cycles thermal efficiency higher than 50% which is not only much more than could be proposed by typical lignite or hard coal power plant but is also more than can be offered by nuclear technology.
Keywords:
gas turbine combined cycle; high-temperature nuclear reactor; cogeneration

Before the thermodynamic investigations were performed, the numerical model was validated against experimental data. A system validation was performed based on a comparison of selected thermodynamic parameters with the operating system, taking into account experimental results [42]. The system used in the experimental measurement was partially modelled. The evaluated results are very close to experimental measurements, confirming that the mathematical and numerical formulas ensure proper results [4].
The results presented in Figure 3 and Figure 4 and summarised in Table 6 are based on the layout of GTCC (see Figure 1 and Figure 2) with single, dual, and triple-pressure heat-recovery steam-generation system with cogeneration coupled with HTR and with various sub-configurations. One can infer from Figure 3a that the triple-pressure HRSG system without inter-stage steam overheating is able to generate more than 212.9 MWe of electrical power. When the system is simplified and equipped with only a single or dual heat-recovery steam-generation unit, then electrical energy production is about 195.6 and 206.7 MWe, respectively, as shown in Figure 3a. In that case, a decrease in the electrical power generation for single- or dual-pressure HRSG is observed.
The investigated thermodynamic cycle with cogeneration is able to generate electrical power with thermal efficiency of 54.9% 52.2%, and 47.7%, depends on the configuration, i.e., triple-3P, dual-2P and single-1P, pressure level HRSG respectively while for the setting with inter-stage steam overheating unit obtain higher thermal efficiencies equal to 55.7%, 50.3%, and 43.8%, respectively. Because nuclear reactor power is fixed heat transported from the first loop to the second loop is constant. Independent of the number of HRGS units and pressure drops in the secondary loop utilise the same amount of primary heat. The proposed system independent of the number of HRSG unit gas turbine generate the same amount of electrical energy equal to 178.6 MW. As a consequence, the power generated by the HP/MP/LP steam turbines differs significantly. That allows following at some level to the grid system, as well as heat for cogeneration requirements. An increasing number of HRSG units increase significantly pressure drop. As a consequence, higher energy consumption by the compressors or blowers is observed. A larger number of units also makes a system more sensitive to any local changes and causes problems when keeping thermodynamic parameters at a predefined level. More HRSG units, particularly evaporators, in the case of complex systems with inter-stage steam superheat or steam regeneration or both, generate significant problems to evaluate or to maintain parameters at the level which ensures safety but also system efficiency. Inter-stage superheating, even with steam regeneration, is a worse solution than steam regeneration only.
The results for the system with a cogeneration and steam regeneration unit and with inter-stage superheating and regeneration of the steam are presented in Figure 4a–c and Figure 4d–f, respectively. The systems with steam regeneration are able to generate about 214.2, 204.5, and 194.2 MWe for 3P, 2P, and 1P configurations, respectively (presented in Figure 4a), while the system with inter-stage superheating and regeneration of steam obtained power equal to 212.9, 201.0, and 196.2 MWe for 3P, 2P, and 1P configurations, respectively (see Figure 4d). The investigated power cycles thermal efficiency for sub-configuration with triple, dual, or single HRSG unit obtain value in the range from 43.6% up to 56.3%. The detailed information for all sub-configurations analysed in this work is summarised in Table 6.

The high-temperature gas nuclear reactor–HTR integrated with gas turbine combined cycle is a very promising novel solution in the field of emission-free energy production. All twelve presented solutions are characterised by very high power-plant performance. The industrial application of proposed in this work power cycle is one of the most efficient ways for energy conversion. Presented results show that it is possible to obtain thermal efficiency higher than could be offered not only by typical brown coal or hard coal power plant, but also more than can be offered by the current nuclear technologies used. The electrical energy and thermal efficiency depend on the exact sub-solution considered here, including single/dual/triple pressure heat recovery steam generator units; inter-stage steam superheat system; steam regeneration system and regeneration system and inter-stage steam superheat.
Presented results of the analysis show that the triple-pressure HRSG system without inter-stage steam overheating is able to generate more than 212.9 MWe of electrical power, and when the system is simplified and equipped with only single or dual heat-recovery steam-generation unit, then its electrical energy production is about 195.6 and 206.7 MWe, respectively. The power plant with cogeneration is able to generate electrical power with the thermal efficiency of 54.9%, 52.2%, and 47.6%, depending on the configuration, i.e., triple-3P, dual-2P, and single-1P, pressure level HRSG, respectively. The configuration with inter-stage steam overheating unit obtained higher thermal efficiencies equal to 55.7%, 50.3%, and 43.8%, respectively. On the other hand, the system with inter-stage superheating and regeneration of steam obtained power equal to 212.9, 201.0, and 196.2 MWe while with steam regeneration evaluated power is 214.2, 204.5, and 194.2 MWe for 3P, 2P, and 1P configurations, respectively.
The results of the analysis show that it is possible to obtain the thermal efficiency 52.2% for the simple system with cogeneration and with dual pressure-level HRSG, which is the best solution from an economic point of view. The system with the triple-pressure-level HRSG unit offers efficiency 2.6 p.p. higher; however, additional cost it is not always economically justified. At the same time, the system with cogeneration and with inter-stage steam overheating can obtain efficiency as high as 55.7%. The highest efficiency achieved for configuration with the steam regeneration system in the range from 43.6% up to 56.3%. The increasing number of HRSG units increase significantly pressure drop and energy consumption by the compressors or blowers. A complex system with a larger number of units also generates a solution more sensitive to any local changes in thermodynamic parameters. More than one HRSG unit in case of complex systems with inter-stage steam superheat or steam regeneration or both generate significant problems to evaluate and to maintain thermodynamic parameters at a predefined level which ensure system safety and efficiency.
Recently, renewable energy and nuclear energy have been deployed and widely expanded globally in order to reduce harmful gases emissions and significantly improve the air and environment quality. The fossil-fuel-dominated power systems decrease, and the decrease of coal-fired power plants is observed; on the other hand, the electrical energy production based on renewable energy create the power system with a severe problem caused by the instability and unpredictability. For this reason, nuclear systems with new safe reactor type have aroused substantial attention as an essential component of the national power systems. The proposed cycles are based on one of the most advanced technologies, giving the possibility to generate electrical power, as well as high-temperature technological heat, while being suitable due to very safe construction, which makes them different from currently available district heating cycles.

Conceptualization, M.J.; methodology and software, M.D.; supervision, Z.K. and M.J.; writing original draft and review and editing, M.J. All authors have read and agreed to the published version of the manuscript. 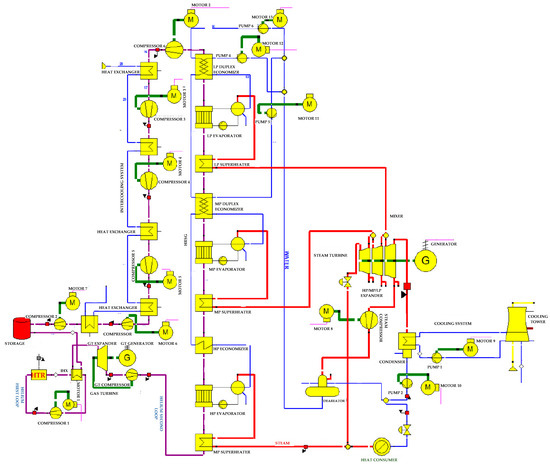 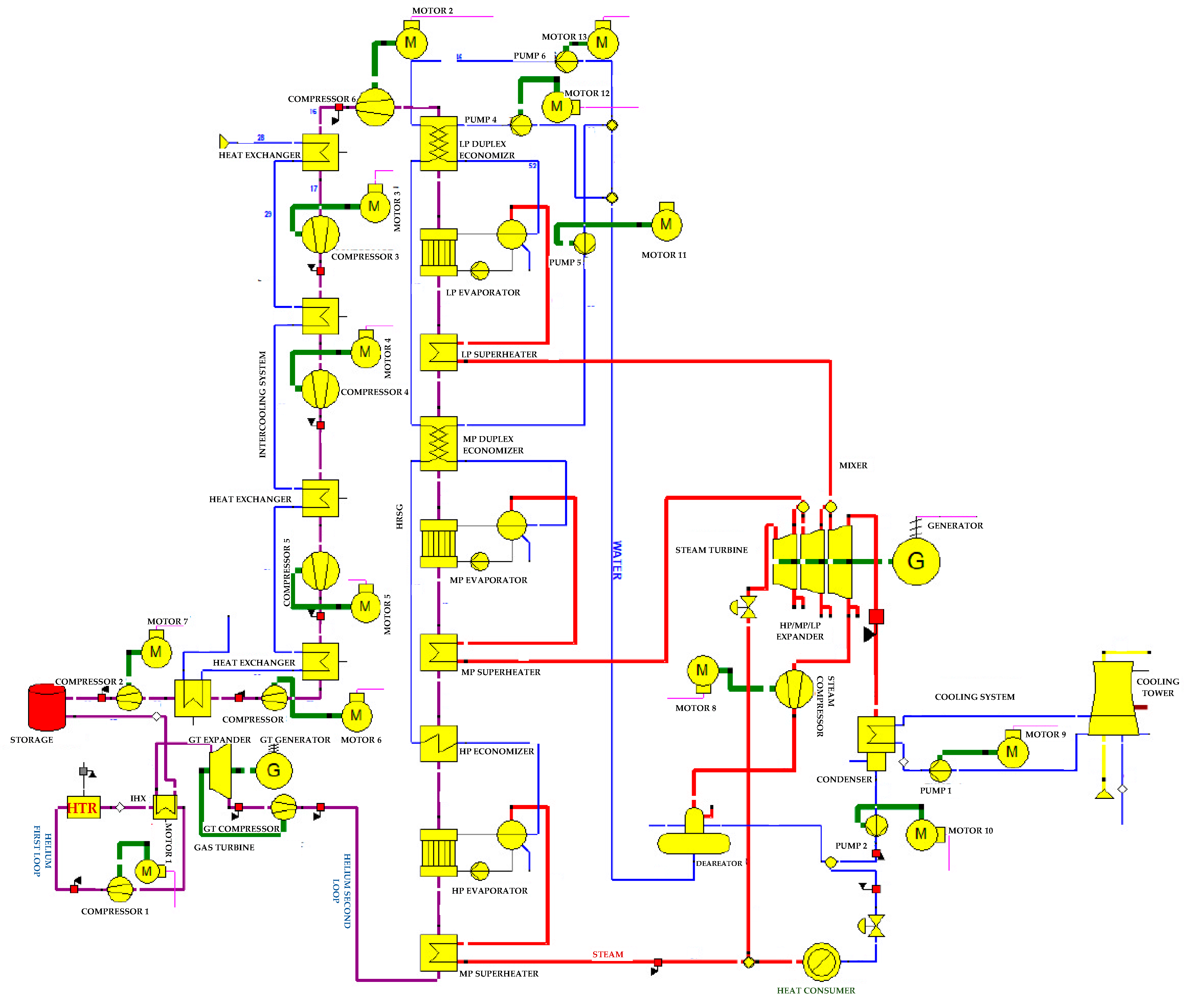 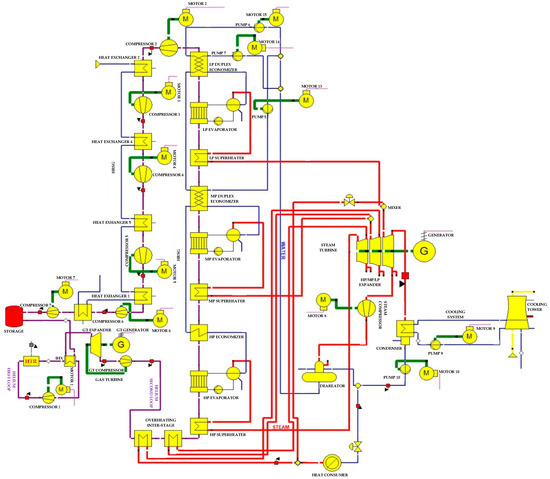 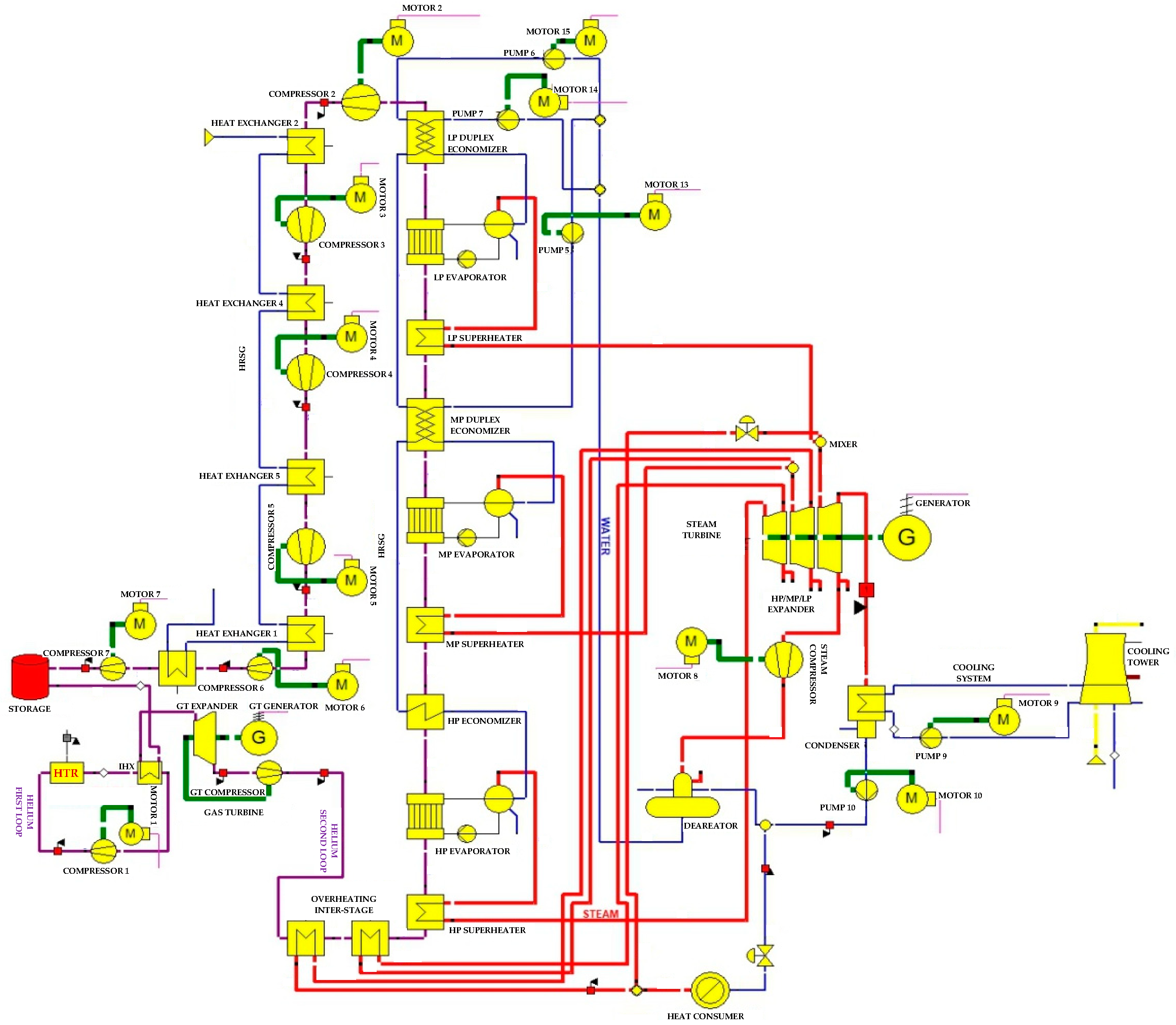 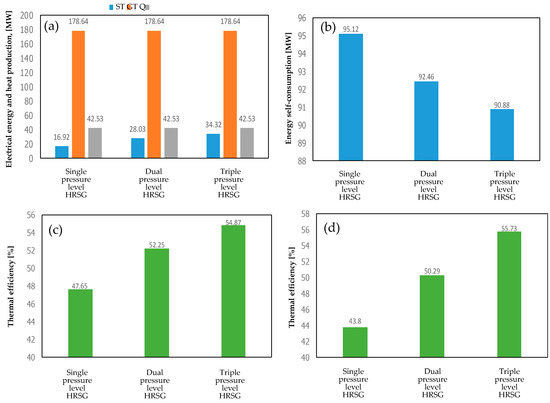 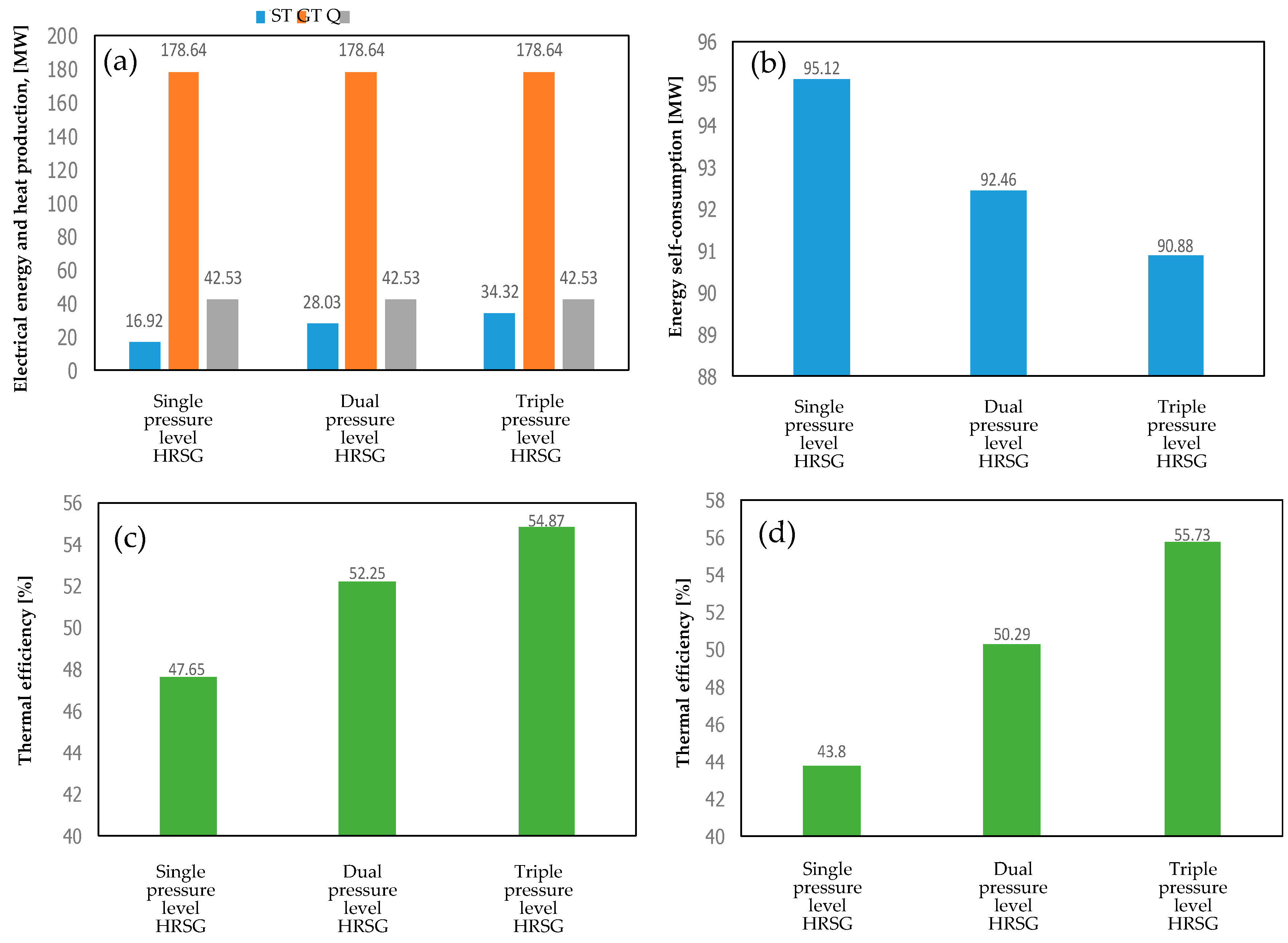 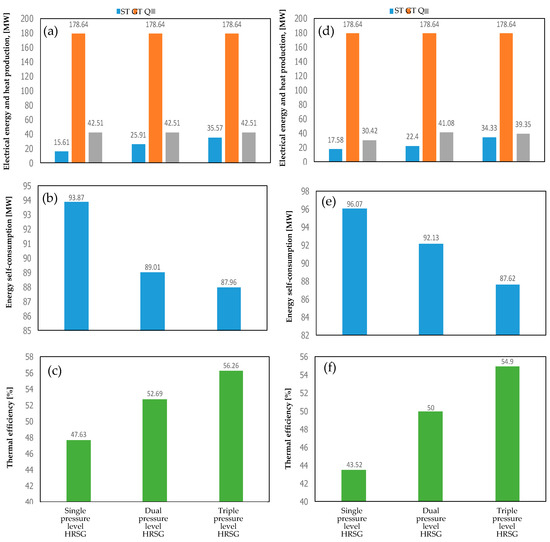 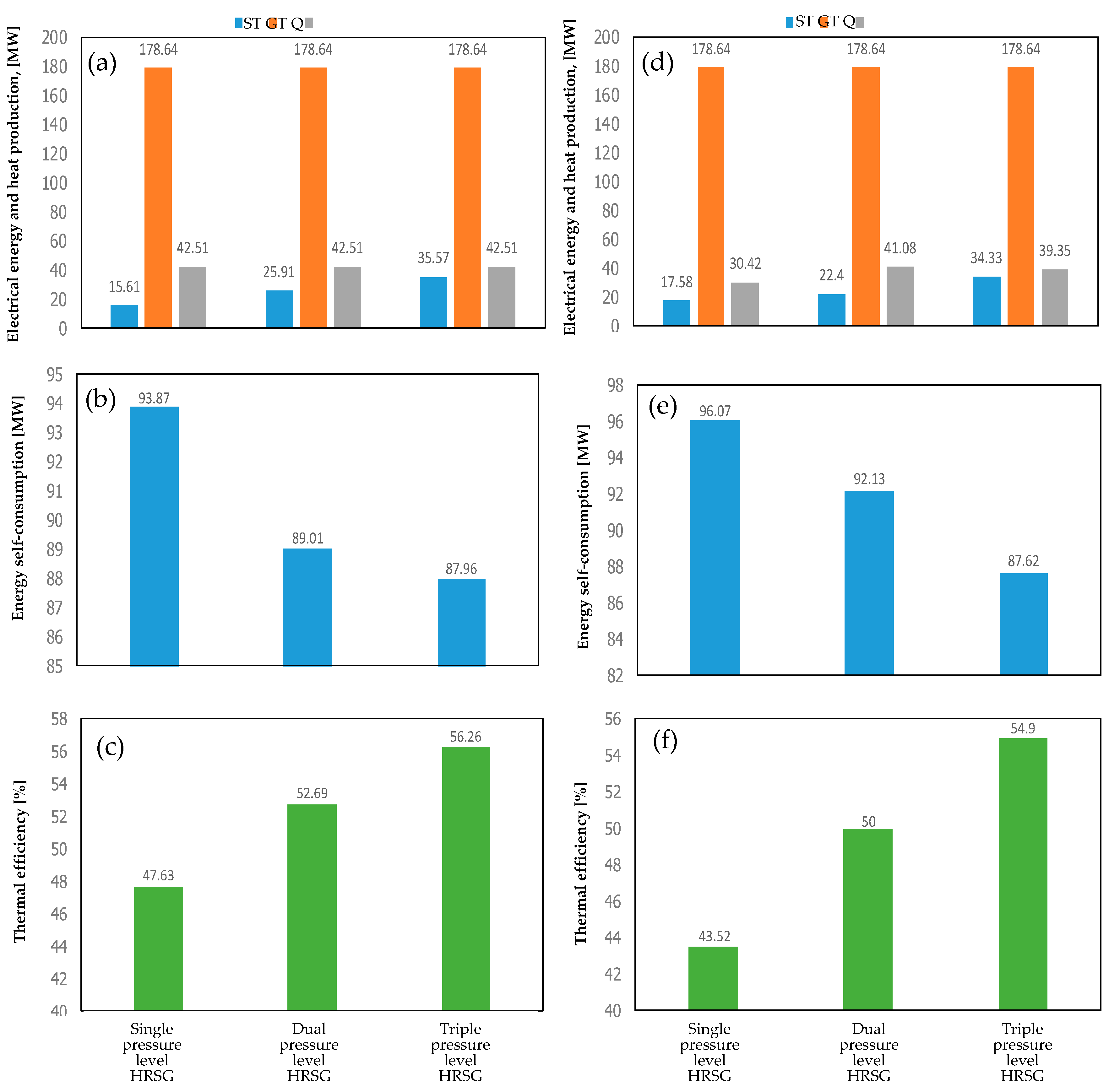 Table 6. Working parameters and assumptions for thermodynamic analysis.
Table 6. Working parameters and assumptions for thermodynamic analysis.
© 2020 by the authors. Licensee MDPI, Basel, Switzerland. This article is an open access article distributed under the terms and conditions of the Creative Commons Attribution (CC BY) license (http://creativecommons.org/licenses/by/4.0/).
We use cookies on our website to ensure you get the best experience. Read more about our cookies here.
Accept
We have just recently launched a new version of our website. Help us to further improve by taking part in this short 5 minute survey here. here.
Never show this again