Composites based on the matrix polymer polypropylene (PP) filled with single-walled carbon nanotubes (SWCNTs) and boron-doped SWCNTs (B-SWCNTs) were prepared by melt-mixing to analyze the influence of boron doping of SWCNTs on the thermoelectric properties of these nanocomposites. It was found that besides a significantly higher Seebeck coefficient of B-SWCNT films and powder packages, the values for B-SWCNT incorporated in PP were higher than those for SWCNTs. Due to the higher electrical conductivity and the higher Seebeck coefficients of B-SWCNTs, the power factor (PF) and the figure of merit (ZT) were also higher for the PP/B-SWCNT composites. The highest value achieved in this study was a Seebeck coefficient of 59.7 µV/K for PP with 0.5 wt% B-SWCNT compared to 47.9 µV/K for SWCNTs at the same filling level. The highest PF was 0.78 µW/(m·K2) for PP with 7.5 wt% B-SWCNT. SWCNT macro- and microdispersions were found to be similar in both composite types, as was the very low electrical percolation threshold between 0.075 and 0.1 wt% SWCNT. At loadings between 0.5 and 2.0 wt%, B-SWCNT-based composites have one order of magnitude higher electrical conductivity than those based on SWCNT. The crystallization behavior of PP is more strongly influenced by B-SWCNTs since their composites have higher crystallization temperatures than composites with SWCNTs at a comparable degree of crystallinity. Boron doping of SWCNTs is therefore a suitable way to improve the electrical and thermoelectric properties of composites.
Keywords: polypropylene; boron doping; carbon nanotube; thermoelectric polypropylene; boron doping; carbon nanotube; thermoelectric

The use of waste heat energy to generate voltage according to the thermoelectric (TE) principle is a well-known approach [1,2,3]. In addition to the metal alloys commonly used in the past [4], new thermoplastic polymer-based materials are becoming increasingly important [5]. On the one hand, the advantage of polymeric materials lies in their low cost, mechanical flexibility, and easy formability, and on the other hand, in the intrinsically low thermal conductivity of polymers. Along with intrinsically conductive polymers, like PEDOT:PSS, PANI, or P3HT, composites of non-conducting polymers with conductive fillers have been developed. Different electrically conductive carbon-based filler materials, such as carbon nanotubes (CNTs), graphite, or graphite nanoplatelets (GNPs), can be added to introduce electrical conductivity in the materials, which is needed for the TE effect. If they are added in a quantity such that a connected path consisting of conductive fillers is formed, they are electrically percolated and behave like a conductor. Among the techniques possible to introduce such fillers in polymeric matrices, melt-mixing has significant advantages over solution-mixing. Namely, it can be easily upscaled and it is more environmentally friendly as no solvents are needed. Examples of this new kind of melt-mixed composites are polypropylene (PP) composites filled with single-walled carbon nanotubes (SWCNT) [6,7,8,9,10], polyetherimide/SWCNT nanocomposites [11], polycarbonate/multi-walled carbon nanotube (MWCNT) composites [12,13,14], polylactic acid (PLA)-based composites containing Bi0.5Sb1.5Te3 and/or MWCNTs [15], PLA filled with MWCNT and/or expanded graphite [16], and poly(vinylidene fluoride) (PVDF)-based polymer composite foams with MWCNTs or GNPs [17]. In a recent paper, screening of different kinds of CNTs in different polymeric matrices was performed, showing that a variety of TE properties can be achieved when varying CNT and polymer type [18].
For the construction of a TE generator able to generate a thermovoltage based on a temperature difference, n- (electron-donating) as well as p-type (electron-withdrawing) materials are needed. One way to influence of p-/n-behavior of composite material is the selection of semiconducting SWCNT types [19,20,21]. SWCNTs easily absorb molecular oxygen from the environment, which attracts electrons and typically leads to p-type SWCNTs [19,22]. On the other hand, such kind of doping may become unstable if SWCNTs are processed at elevated temperatures or under vacuum conditions. A substitutional doping of SWCNTs with boron (B) atoms, where B replaces some of the carbon (C) atoms in the hexagonal lattice of SWCNT walls, is more stable and leads to an increase in both the Seebeck coefficient and electrical conductivity of SWCNT networks [23]. Furthermore, large amounts of B-doped SWCNTs can be produced with a post-synthesis treatment of pristine SWCNTs, which is important in regard to the application of such material in thermoelectric applications.
In the literature, studies of composite materials filled with boron-doped carbon nanotubes are very rare. Kumanek et al. [24] described temperature-dependent thermoelectric measurements on ethyl cellulose/doped MWCNT films in the range from 30 to 100 °C. It has been reported that the Seebeck coefficient for ethyl cellulose/B-doped MWCNT was almost constant at around 23 µV/K. This represents a significant increase in the Seebeck coefficient compared to undoped MWCNTs for which a Seebeck coefficient of −1.5 µV/K was measured. By contrast, n-type doping of SWCNTs is a challenge in terms of doping stability. Various types of doping are described in the literature, e.g., polymer coating, charge transfer from polymer chains to the CNTs, encapsulation of organometallic materials in the nanotubes, doping by salt anions with countercations, or nitrogen input [19,20,24,25].
The performance of a TE material is evaluated by different parameters, such as Seebeck coefficient S, power factor PF, and figure of merit ZT.
The Seebeck coefficient S is calculated by where U is the measured thermovoltage at a temperature difference dT. A negative Seebeck coefficient indicates n-type material and a positive Seebeck coefficient p-type material.
The power factor (PF) is also commonly used as a performance parameter since it is directly related to the usable power that can be achieved. The PF is calculated by where S is the Seebeck coefficient and σ is the electrical conductivity.
The third parameter is the dimensionless figure of merit ZT and it is defined as where S is the Seebeck coefficient, σ is the electrical conductivity, T is the absolute temperature, and κ the thermal conductivity.
In order to achieve high TE performance, a high Seebeck coefficient S, high electrical conductivity σ, and low thermal conductivity κ are desirable. However, these parameters are heavily interrelated, and optimization is a challenge.
In the present study, boron-doping of SWCNTs was performed and these B-SWCNTs as well as the comparable raw SWCNT material were incorporated into polypropylene (PP) using melt-mixing at a small scale. The thermoelectric properties of the PP composites were measured and discussed. Additionally, the PP/SWCNT composites were characterized regarding nanotube dispersion at the macro- and nanoscale, electrical properties, and thermal behavior.

PP composites filled with SWCNTs and B-SWCNTs were prepared to analyze the influence of boron-doping of SWCNTs on the thermoelectric properties of PP composites. Thereby, the boron doping of SWCNTs represents an easily performed post-synthesis treatment of pristine SWCNTs and can be scaled to produce large amounts of B-doped SWCNTs. It was found that a significantly higher Seebeck coefficient could be measured not only for B-SWCNT films and powder packages, but also for PP composites, and the values for incorporation of B-SWCNT were higher than for SWCNTs. Due to the higher electrical conductivity and the higher Seebeck coefficients, PF and ZT were also higher for the PP/B-SWCNT composites. The highest value achieved in this study was a Seebeck coefficient of 59.7 µV/K for PP with 0.5 wt% B-SWCNT. However, this high value could also be achieved by varying the PP type to one with very low melt viscosity, where the addition of 0.5 wt% of pristine SWCNTs also resulted in a value of 59.8 µV/K. The highest power factor of this study of 0.11 µW/(m·K2) was achieved at 2 wt% B-SWCNT addition, which also resulted in the highest ZT value of 1.3 × 10−4.
The macro- and nanodispersion of the SWCNT in the composite (Figure 6 and Figure 7) can be excluded as a cause for the different conductivities and Seebeck coefficients between B-SWCNTs and SWCNTs in the same PP type, since no significant differences were found. With regard to the electrical properties, the same very low electrical percolation threshold at 0.075 to 0.1 wt% was determined for both SWCNT types. However, at higher SWCNT contents, the volume conductivity of PP/B-SWCNT composites is about one order of magnitude higher than that of PP/SWCNT. The investigation of the thermal behavior of the composite materials showed that crystallization in PP/B-SWCNT composites starts at significantly higher temperatures than in PP/SWCNT. However, the total crystallization in both composites is almost identical.
In summary, it can be concluded that boron doping is the most likely cause for the different thermoelectric properties, in particular, the higher Seebeck coefficient. However, it cannot be excluded that the higher crystallization temperatures found with the addition of B-SWCNT, which indicate a changed PP crystallite structure, also have an influence on the thermoelectric properties. From the higher Seebeck coefficient values of the PP/B-SWCNT composites, it can be deduced that with boron doping, the p-character (electron deprivation) of the SWCNTs was also successfully strengthened in the PP-based composites.
Furthermore, it was also shown that the grade used for the PP matrix has a major influence on the thermoelectric properties of PP/SWCNT composites. This indicates that not only the electrically conductive SWCNT network, but also the interaction between the PP matrix and the SWCNTs have to be considered. Possibly, the crystallinity and the crystallization temperatures of PP play a role. Voigt [36] found that total PP crystallinity increased from 54% to 56% with the addition of 0.5 wt% SWCNT to PP of type HG475FB. The crystallization temperature simultaneously increased by 12.7 K (from 119.7 to 132.4 °C), which represents a significantly higher increase than for the PP grade investigated here (Table 2). The cause of the PP influence on different composite properties has to be revealed in further investigations.

This work is partly supported by the European Union’s Seventh Programme for research, technological development and demonstration under grant agreement No. 604647 and by the German Federal Ministry of Education and Research (grant No. 031B0298). Ye Liu thanks the China Scholarship Council (grant No. 201406) for the provided scholarship.

The authors thank the collaborators of the IPF research technology department for their support. The TEM observations of the SWCNT materials were performed by Ignacio Gonzales (Leibniz Institute for Solid State and Materials Research Dresden, Germany). Open Access Funding by the Publication Fund of the TU Dresden. 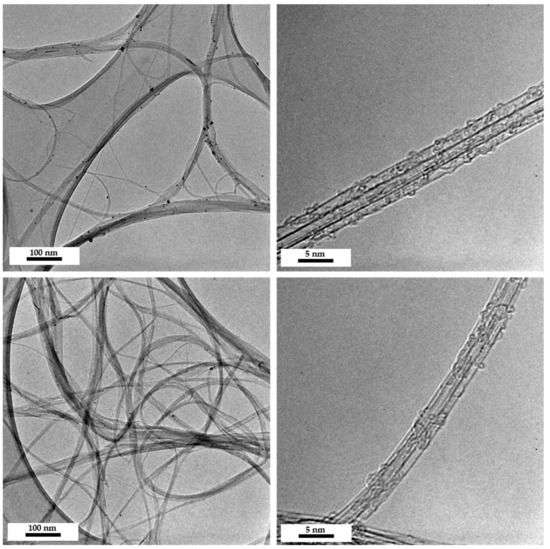 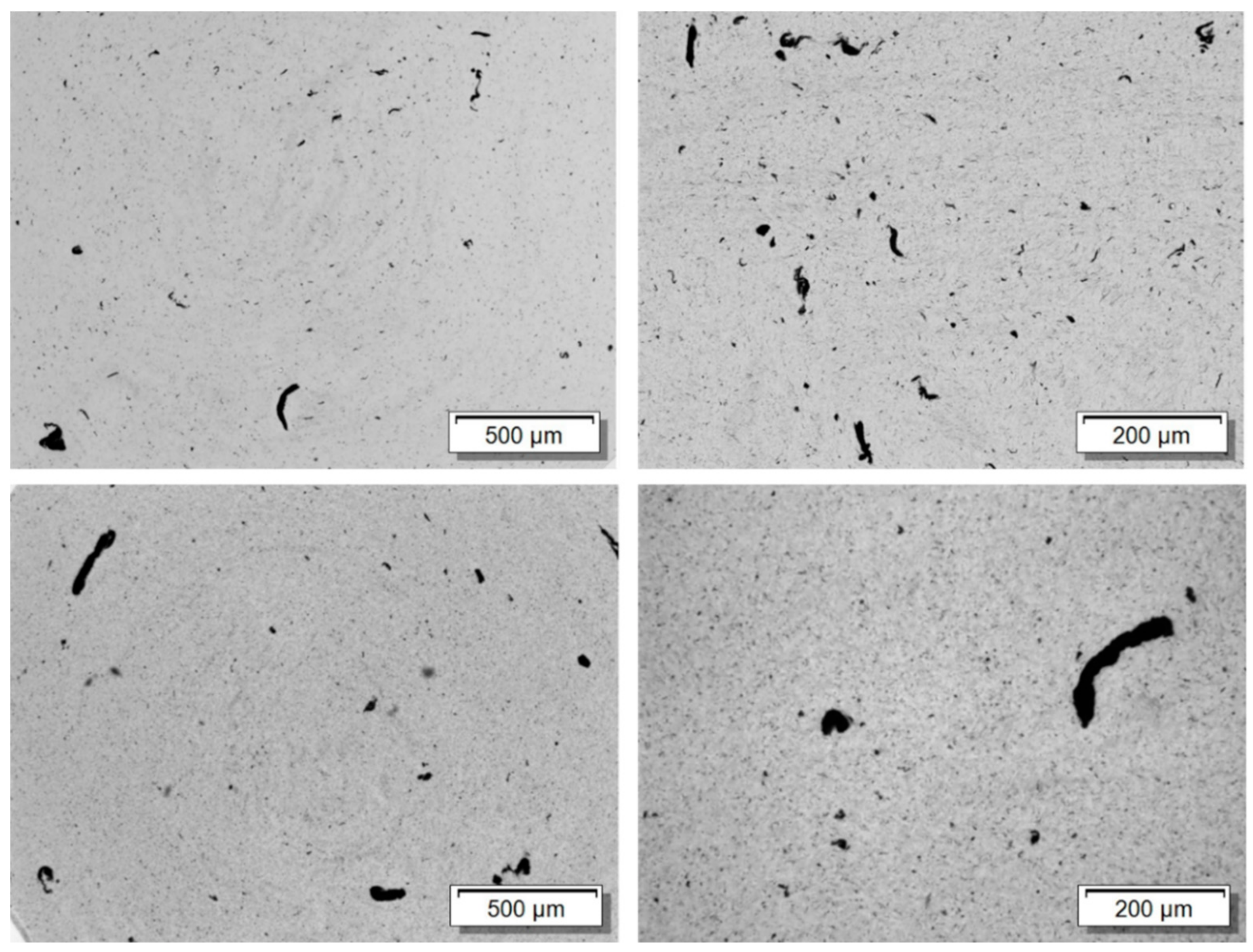 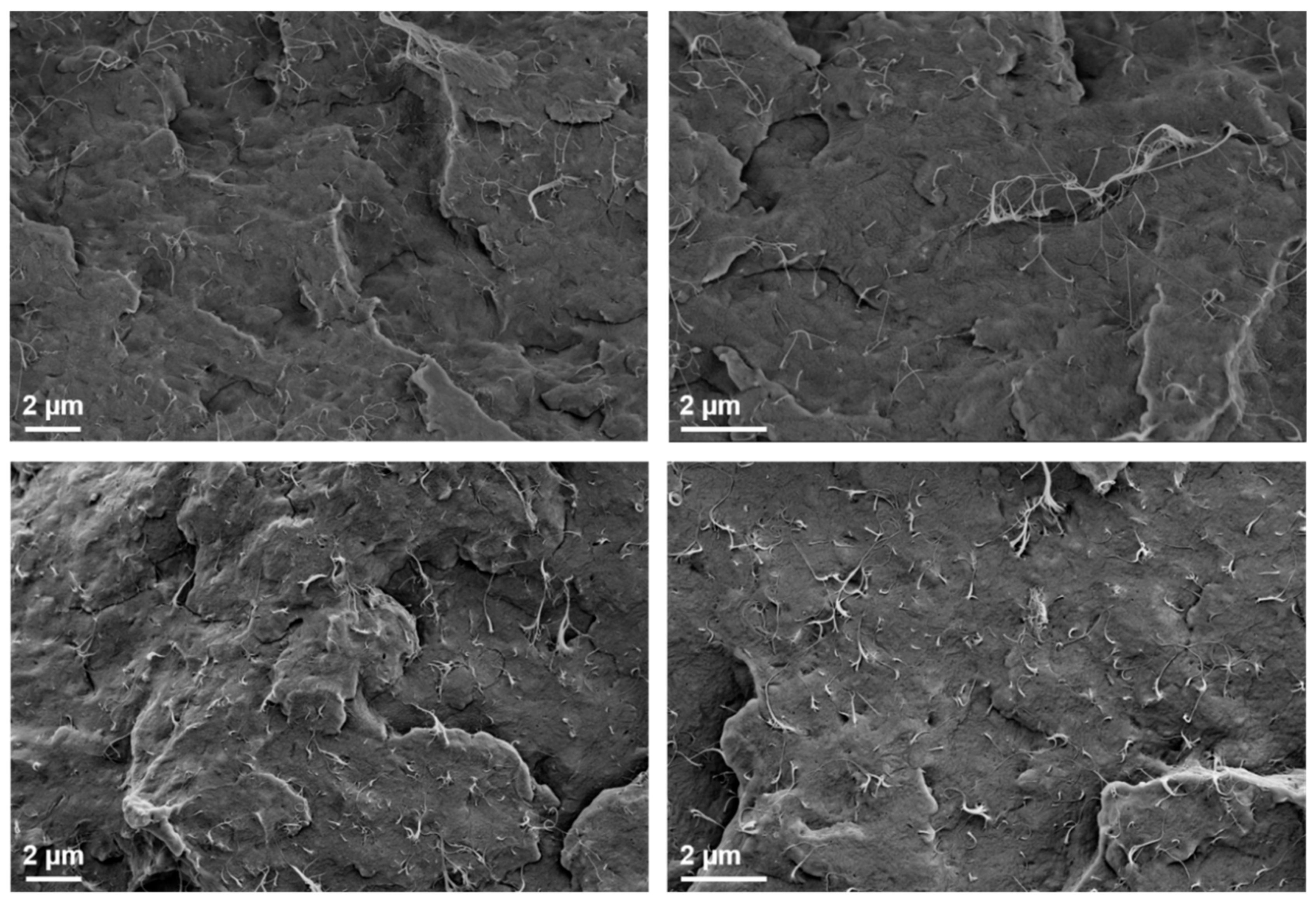