In this paper, the impact of the back contact barrier on the performance of Cu (In, Ga) Se2 solar cells is addressed. This effect is clearly visible at lower temperatures, but it also influences the fundamental parameters of a solar cell, such as open-circuit voltage, fill factor and the efficiency at normal operation conditions. A phototransistor model was proposed in previous works and could satisfactorily explain specific effects associated with the back contact barrier, such as the dependence of the saturated current in the forward bias on the illumination level. The effect of this contribution is also studied in this research in the context of metastable parameter drift, typical for Cu (In, Ga) Se2 thin-film solar cells, as a consequence of different bias or light soaking treatments under high-temperature conditions. The impact of the back contact barrier on Cu (In, Ga) Se2 thin-film solar cells is analyzed based on experimental measurements as well as numerical simulations with Technology Computer-Aided Design (TCAD). A barrier-lowering model for the molybdenum/Cu (In, Ga) Se2 Schottky interface was proposed to reach a better agreement between the simulations and the experimental results. Thus, in this work, the phototransistor behavior is discussed further in the context of metastabilities supported by numerical simulations. View Full-Text
Keywords: photovoltaics; thin-films; CIGS; back contact; barrier; phototransistor photovoltaics; thin-films; CIGS; back contact; barrier; phototransistor
►▼ Show Figures 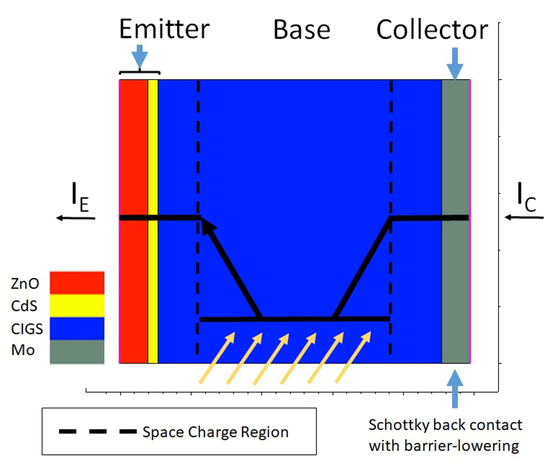