Smart microgrids (SMGs) may face energy rationing due to unavailability of energy resources. Demand response (DR) in SMGs is useful not only in emergencies, since load cuts might be planned with a reduction in consumption but also in normal operation. SMG energy resources include storage systems, dispatchable units, and resources with uncertainty, such as residential demand, renewable generation, electric vehicle traffic, and electricity markets. An aggregator can optimize the scheduling of these resources, however, load demand can completely curtail until being neglected to increase the profits. The DR function (DRF) is developed as a constraint of minimum size to supply the demand and contributes solving of the 0-1 knapsack problem (KP), which involves a combinatorial optimization. The 0-1 KP stores limited energy capacity and is successful in disconnecting loads. Both constraints, the 0-1 KP and DRF, are compared in the ranking index, load reduction percentage, and execution time. Both functions turn out to be very similar according to the performance of these indicators, unlike the ranking index, in which the DRF has better performance. The DRF reduces to 25% the minimum demand to avoid non-optimal situations, such as non-supplying the demand and has potential benefits, such as the elimination of finite combinations and easy implementation. View Full-Text
Keywords: load shedding; optimization of energy demand supply; smart microgrid scheduling; 0-1 knapsack problem load shedding; optimization of energy demand supply; smart microgrid scheduling; 0-1 knapsack problem
►▼ Show Figures 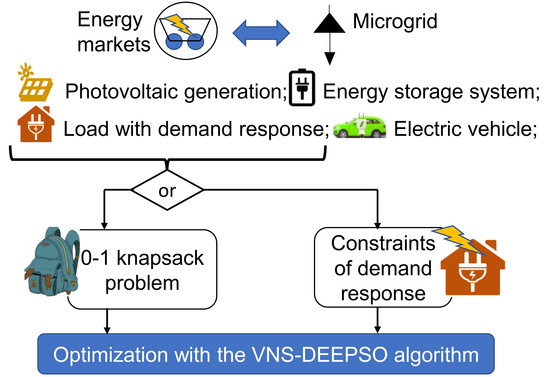