Knowing the energy consumption according to final consumption sectors at national level, we aim to assess the energy consumption at county level using the share of population at county level within the total population, but also the share held by each county in the energy-consuming economic activities. As a proxy for economic activity we used the share of the economically active population by activities of the national economy.
We grouped the variables (indicators) in two categories: demographic (share of urban population, population size, share of population aged 65 and over, the economically active population by activities of the national economy: agriculture, industry, transport), and economic (GDP per capita, residential energy consumption, energy consumption by activities of national economy: agriculture, industry, transport). The economic indicators are available at national level (except the GDP per capita, which is available at county level), while the demographic indicators are available at county level.
In the first stage, we determined the energy consumption at county level, by knowing the importance of indicators at national level for each year (1995, 2000, 2005, 2010, 2015) and for each county, using the following equation: where
IN is the national level indicator (demographic or economic),
IC is the county level indicator,
EcN is the energy consumption (national level), and
EcC is the energy consumption (county level).
When we use the size of the population in the equation, we find out the residential energy consumption, and when the data refer to the economically active population divided by activity of national economy we obtain the energy consumption by activities of national economy.
Consequently, the energy consumed in an economic activity at county level is related to the share of the active population in the economic activity held by the respective county from the active population at national level. The same situation applies to the energy consumed by households which is related to the share of the resident population. Therefore, we refer to an average consumption per person (active or resident population).
We used the data obtained from the above calculations in the second stage, by means of multivariate analysis. The Hierarchical Ascending Classification (HAC) (using the Philcarto software) groups the spatial units (counties) according to the similarities between the values of the indicators, providing information about their typology. Thus we intended to highlight the links between energy consumption by the activities of the national economy and the standard of living (GDP/capita), population agglomeration (percentage of urban population) and the propensity for energy consumption of a group of population (population aged 65 years and over). To the above specified variables we added the percentage of the economically active population by activities of the national economy (agriculture, industry, construction and transport) of the total active population, as well as the share of energy consumption (as determined by the authors) for the final energy consumption (the remaining difference up to 100% being represented by the energy consumption from service activities).
With the help of HAC, the indicators were grouped into classes by reference to the mean value using standard deviation. Calculating the standard deviation (which represents the square root of the variation) helps estimate the dispersion for each variable. HAC allows the creation of an exact hierarchy on a large data set according to the following data aggregation strategy: minimum linkage, minimum diameter, average distance, variation. HAC helped us visualize the profiles of the counties and draw conclusions on how the indicators and the counties with the same profile were grouped [34,35,36,37,38].
Minimum linkage or nearest neighbor clustering is a hierarchical technique with a wide spread in research fields such as health, economics, and regional development. To calculate the distance between two clusters, the distance between their closest members is used [39].
The weighted pair-group method (average distance) was applied to all clusters members for differentiating between two clusters, according to the following algorithm: the arithmetic averages of the distance between the two clusters is calculated as the average of distances between all members of two clusters [40]. Thus, the number of members in each cluster is not important, each pair of members that merge at the level of the two clusters having equal weight [40].
The point where the binary tree is cut in order to form clusters is named cluster cutoff. A dendrogram is interpreted as follows: the farther the joining points between the subtrees (clusters) are, the more similar the subtrees are [41]. The hierarchical cluster analysis (HCA) is a statistical technique producing, as a result sequentially pairing members by cluster composition. The HCA has in view the pairing members algorithm by which result increasingly large clusters and, finally, all members are clustered in a single group. This analysis differs from other cluster analyses in that a single set of mutually exclusive and exhaustive clusters is formed. The class-inclusion relationships between the clusters and the value of the grouping criterion associated with each are shown by the dendrogram [42]. Hierarchical cluster analysis identifies a range of clusters based on a measure of intra-cluster homogeneity of each cluster and inter-cluster heterogeneity [43].
A dendrogram includes quantitative values of the similarity or distance at which clusters are fused together in each agglomerative stage [44]. We must mention, however, that due to the fact that the predicted property value for a cluster is the average of all of the other compounds in the group, the predictive ability is generally low if very few groups are identified [44].
To calculate the distance between two clusters, the correlation between these is used [45]:
D=1 − C, where D = Distance and C = correlation between clusters.
When correlation value is close to 1 (highly correlated clusters), the distance is close to 0, when correlation value is close to 0 (not correlated clusters), the distance is close to 1 and when correlation value is close to −1 (negatively correlated clusters), the distance is close to 2 [45]. At the bottom of the dendrogram are placed the highly correlated classes.

The Romanian Danube Valley can be considered an applicable region for investigating the regional energy consumption based on the energy consumption rate at national level in terms of its mix between economic activities, urban and rural, and less and more developed areas. These geographic and socio–economic factors which influence the energy industry (the most important being the Danube River itself with its dams), such as the nuclear power plant and renewable energy sources are capitalized upon in different geographic environments.
The Romanian Danube Valley, an important part of the Danube Region, is situated along 1075 km of the Danube River. It includes parts of four development regions: South-East Dobrogea, South Muntenia, South-West Oltenia and West and twelve counties: Tulcea, Constanța, Galați, Brăila, Ialomița, Călărași, Giurgiu, Teleorman, Olt, Dolj, Mehedinți and Caraş-Severin (Figure 1). Currently, of the total of 804 local administrative units (LAU) in the Romanian Danube Valley, 733 are rural and 71 are urban LAU. The overall population numbers 4.9 million inhabitants (2019), out of which 47.2% are rural and 52.8% are urban [46] (Table 1).
Furthermore, the motivation behind investigating the regional energy consumption in the Romanian sector of Danube Valley lies in the diversity of its economic activities (e.g., agriculture, industry with an intensive energy consumption, transport) which were all differently affected by the fall of the communist political regime in the end of the 1980s. The region is part of a less industrially specialized region compared to the national average, being economically and socially underdeveloped. The 1990s (after the fall of the communist period) did severely affect the regions with lower industrial specialization compared to the pre-1990 national average, in which the economic gap, dividing them from other regions, was widening [47]. Danubian localities lost 60% of their industrial population registered in early 1992. At the same time, the largest cities, hosting major industries on their territories, experienced a considerable loss of their active industrial population. The dominant industries of the Danubian towns are intensive labor and energy consumers. One of the industrial branches most affected by deindustrialization and high energy consumerism was metallurgy, still an important industry in the Danube area due to the Arcelor-Mittal multinational company [48].
The Romanian Danube Valley also represents the main agriculture area of the country. After 1989 the region was characterized by the changeover from collective to private possession (through the Land Law no. 18/1991), associated with the land fragmentation, as well as the demolition and abandonment of the irrigation systems.
The Danube Valley is an important transport passage which requires the expansion and modernization of its port and waterway infrastructure, but also of its airport routes, road and rail systems, by creating an inter-modal logistics system [49,50].

This work was supported by the project PN-III-P1-1.2-PCCDI-2017-0404/31PCCDI⁄2018 (UEFISCDI)—Holistics of the renewable energy sources on environment and climate (HORESEC) and ‘The Geographical Study of the Romanian Danube Valley’ Project under the research plan of the Romanian Academy’s Institute of Geography. 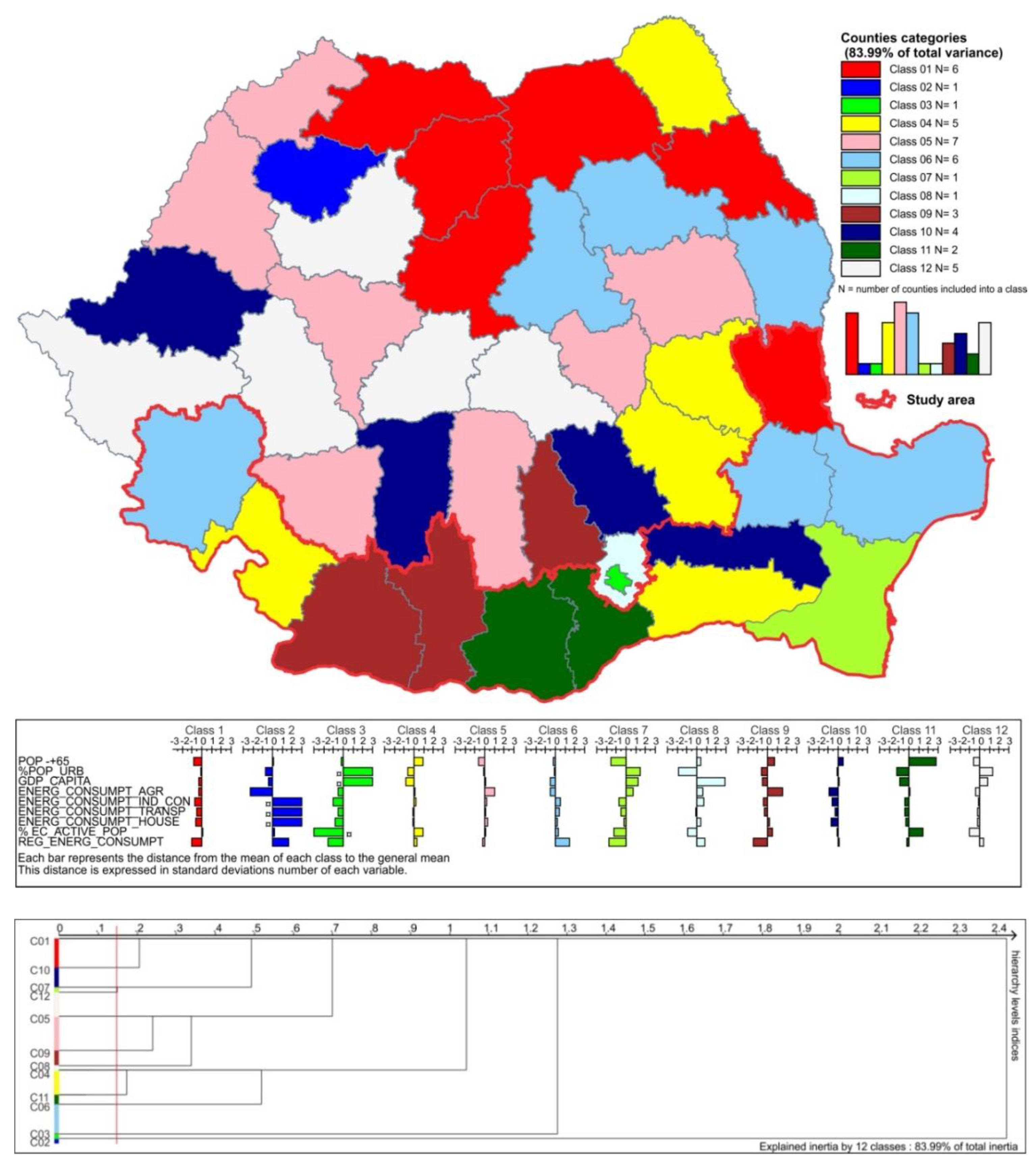 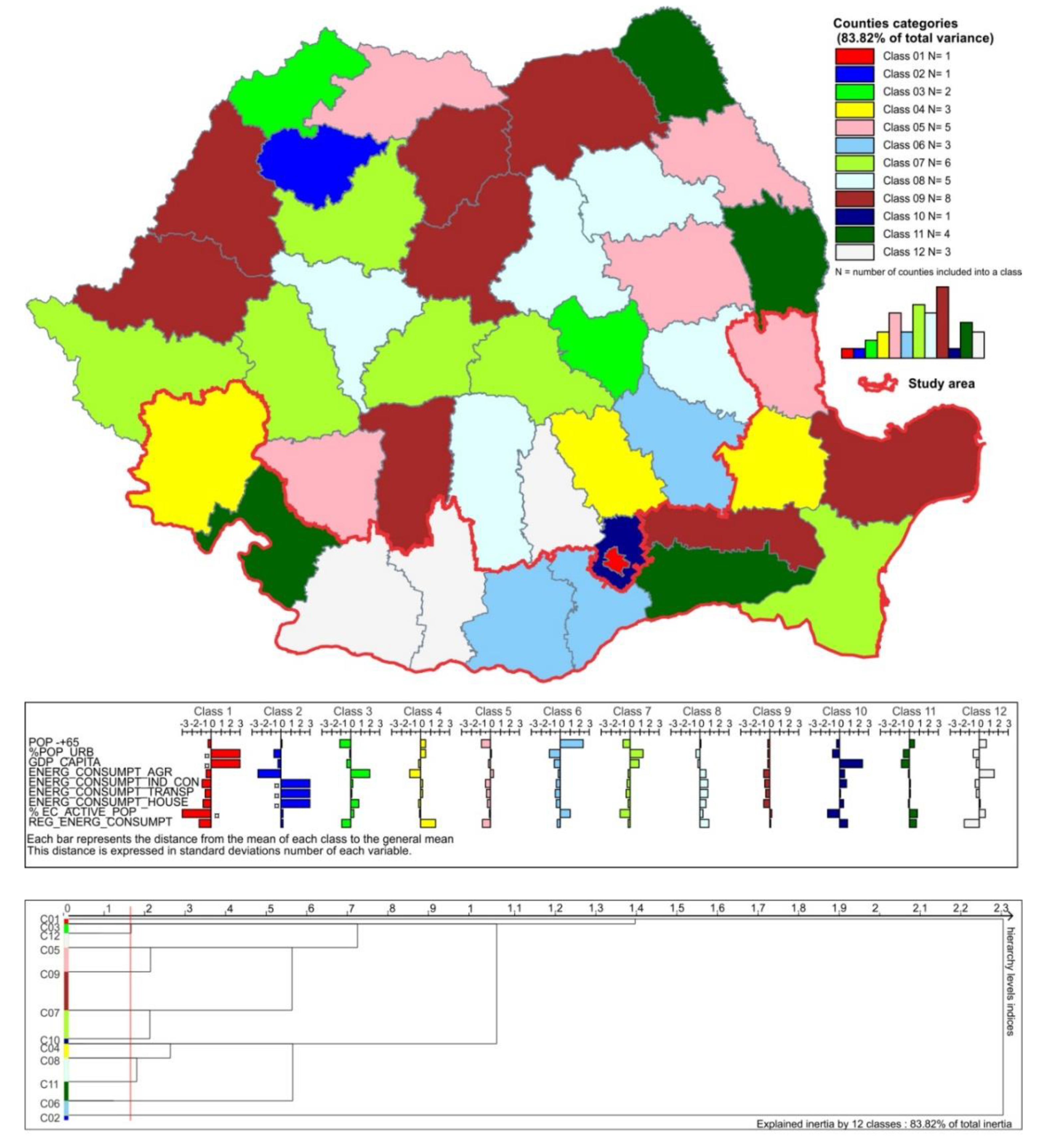