Optimal Sizing and Scheduling of Hybrid Energy Systems: The Cases of Morona Santiago and the Galapagos Islands
Previous Article in Journal

In this work, the analysis of a hybrid LiBr/H2O absorption-cooling and flash-desalination system, using solar thermal energy as heat source, is presented. An absorption open-cycle with three pressure levels is used in combination with a single-stage flash-desalination process to use the coolant as product water, resulting in an increase in cooling and desalination efficiency. For the application, a 20-room coastal hotel complex in San Felipe, Baja California, Mexico, is taken as a case study and the sizing of the solar collection and storage system is carried out for the operation of the proposed hybrid system, during the summer operative period. The operational dynamics during the week with the highest ambient temperatures are presented. The dimensioning of the solar collector’s area and the energy storage resulted in a collection area of 620 m2 with 30 m3, respectively, reaching a solar fraction of 69%. The absorption-cooling subprocess showed an increase of 13.88% in the average coefficient of performance (COP) compared to conventional LiBr/H2O absorption systems. Also, considering that the system provides cooling and desalination simultaneously, the average COPG is 1.64, which is 2.27 times higher than the COP of conventional LiBr/H2O single-effect absorption units. During the critical week, the system presented a desalinated water production of 16.94 m3 with an average performance ratio (PR) of 0.83, while the average daily water production was 2406 kg/day; enough to satisfy the daily water requirements of four people in a coastal hotel in Mexico or to cover the basic services of 24 people according to the World Health Organization. View Full-Text
Keywords: solar energy; absorption cooling; desalination solar energy; absorption cooling; desalination
►▼ Show Figures 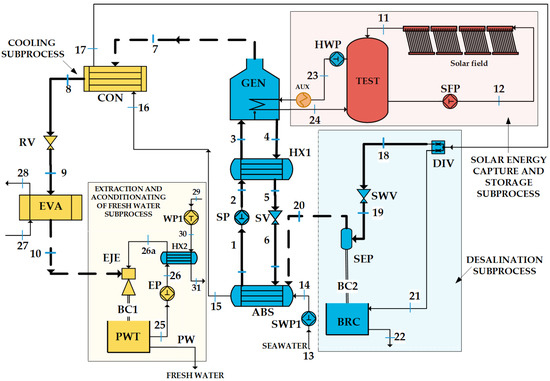