The scope of the present study was to understand the wake characteristics of wind-turbines under various inflow shears. First, in order to verify the prediction accuracy of the in-house large-eddy simulation (LES) solver, called RIAM-COMPACT, based on a Cartesian staggered grid, we conducted a wind-tunnel experiment using a wind-turbine scale model and compared the numerical and experimental results. The total number of grid points in the computational domain was about 235 million. Parallel computation based on a hybrid LES/actuator line (AL) model approach was performed with a new SX-Aurora TSUBASA vector supercomputer. The comparison between wind-tunnel experiment and high-resolution LES results showed that the AL model implemented in the in-house LES solver in this study could accurately reproduce both performances of the wind-turbine scale model and flow characteristics in the wake region. Next, with the LES solver developed in-house, flow past the entire wind-turbine, including the nacelle and the tower, was simulated for a tip-speed ratio (TSR) of 4, the optimal TSR. Three types of inflow shear, N = 4, N = 10, and uniform flow, were set at the inflow boundary. In these calculations, the calculation domain in the streamwise direction was very long, 30.0 D (D being the wind-turbine rotor diameter) from the center of the wind-turbine hub. Long-term integration of t = 0 to 400 R/Uin was performed. Various turbulence statistics were calculated at t = 200 to 400 R/Uin. Here, R is the wind-turbine rotor radius, and Uin is the wind speed at the hub-center height. On the basis of the obtained results, we numerically investigated the effects of inflow shear on the wake characteristics of wind-turbines over a flat terrain. Focusing on the center of the wind-turbine hub, all results showed almost the same behavior regardless of the difference in the three types of inflow shear. View Full-Text
Keywords: wind-turbine wakes; wind-tunnel experiment; large-eddy simulation (LES); actuator line (AL) model; inflow shear wind-turbine wakes; wind-tunnel experiment; large-eddy simulation (LES); actuator line (AL) model; inflow shear
►▼ Show Figures 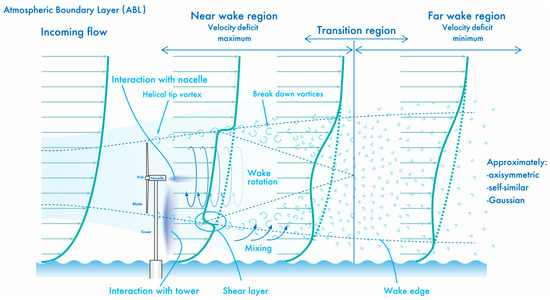