The designed nonlinear controller and the conventional MPPT controllers work on different patterns. In conventional controllers, the slope or gradient is constantly being required for achieving the desired MPP and even after achieving the MPP the controller keeps on checking the change in power or the rate of change of slope of PV curve. Nonlinear controller works by first generating the reference voltage which is to be tracked by the controller in order to achieve the MPP. Each combination of temperature and irradiance gives different characteristic curve of PV array and thus changing . Relationship between and both irradiance and temperature can be determined by different methods e.g., multiple linear regression method, neuro-fuzzy methods and different artificial intelligence based techniques, etc. In this paper, this relationship is determined by using the application of ANN which produces the reference for peak power voltage. The mathematical model for noninverting Buck-Boost converter is derived which is used for designing a nonlinear controller to track the reference for peak power voltage generated by ANN. The proposed methodology is drawn in Figure 5.

Noninverting Buck-Boost converter shown in Figure 13 can either step-up or step-down the output voltage. For the control of this converter, we require its mathematical model which is derived in this section. The assumption of Continuous Conduction Mode (CCM) holds throughout the paper and for the sake of simplicity, switches and diodes are assumed to be ideal. Further the resistances of inductor and capacitors are also assumed to be negligible and thus taken as zero. The converter has two modes of operations.
Mode1: In this mode both the switches and are closed while both the diodes and are reverse biased. By using Kirchoff’s Laws we have:
Mode2: In this mode of operation, both the diodes and are forward biased and both switches and are open. Kirchoff’s Laws give:
Now by using inductor volt second balance and capacitor charge balance, we can write the average model in vector matrix form as: where u is the input which has to be given in the form of duty cycles to switches and of the converter. Assuming , , and to be the average values of , , and u respectively, we can write state space equations as:
The model given in Equation (14) is used in controller design for tracking of MPP.

Supertwisting sliding mode control law requires the formulation of an equivalent control along with switching control. For this purpose an appropriate sliding surface has to be designed. Among various surface designing methods, error based designing method is chosen. By taking the error for the first state of the system as: where is the reference value for state . We can take sliding surface as follows:
Taking time derivative of the Equation (16), we get: whereas , and are constant design parameters for sliding surface. Similarly, taking the time derivative of Equation (15), we have:
Putting the value of in Equation (17), we get:
Substituting the values of , and from Equation (14) in Equation (19), we have:
For extracting , we have to put which results in: is obtained from Equation (21) which is given as:
Switching control in case of supertwisting sliding mode design is selected as: where a, , , and M are design parameters which are taken as defined in [30]: with conditions where is the state matrix, is the input matrix and is the vector representing the external disturbances occurring in the system.
The final control law of ST-SMC is given as:
For the stability of the designed controller, let us consider the Lyapunov candidate function as:
Time derivative of Equation (29) yields:
Putting the value of from Equation (20) into Equation (30), we have:
Substituting the values of , and from Equations (18) and (14) in Equation (31) yield:
Now by putting the value of from Equation (28) in Equation (32), we get:
Simplification of Equation (33) gives the following expression for as:
Since the derivative of the Lyapunov function is negative definite, it ensures the global asymptotic stability of the proposed controller. Parameters M and a are chosen according to the bounds given in Equations (24) and (25) such that always remains negative definite.

For synergetic control law, only one macro variable is selected due to the presence of one control input. The purpose of this control is to track the state variable to its desired value with an exponential rate. The dynamic evolution is thus considered as: where T is a positive number and represents the convergence rate. Now by putting the values of and from Equations (19) and (16), respectively in Equation (37), on simplification we get:
We get the required control input = as:
For the stability of proposed controller, the value of from Equation (37) is substituted in Equation (30) to get: or
The Equations (40) and (41) show that the derivative of Lyapunov function is negative definite and the designed controller is globally exponentially stable.

5.1. Response of ST-SMC under Changing Irradiance

The irradiance level is first maintained at a standard level of 1000 W/m and is changed to 850 W/m and then to 700 W/m with a regular interval of 0.05 s. The temperature of 25 °C is maintained throughout the process. The response of output voltage of the PV array under changing irradiance is shown in Figure 14.
The reference for peak power voltage depends upon the change in irradiance and temperature. The controller successfully tracks the reference peak power voltage generated by the application of ANN with almost zero steady state error. This also shows the robustness of designed controller under the environmental variations which are change in temperature and irradiance. The settling time is 2.4 ms and there is no undershoot in the dynamic response, however there is negligibly small overshoot of 0.0415 V in this case. The rise time of ST-SMC is 2.0 ms.
Variations in irradiance level also affect the generated power and the power produced at the output. The response of power under these variations is depicted in Figure 15. The MPP is achieved within 2.5 ms with no steady state error and oscillations/ripples in steady state response is observed. Furthermore, maximum power is successfully transferred by the converter with more than 97% efficiency. The voltage and current at the output side of the converter is shown in Figure 16.

5.2. Response of ST-SMC under Changing Temperature

In this subsection, the response of ST-SMC is validated by varying the temperature at regular intervals of 0.05 s. The temperature is first maintained at 30°C and is varied to 38 °C and then to 50 °C. The irradiance level in this case is kept constant at 1000 W/m. The response of PV output voltage under changing temperature has been shown in Figure 17. It can be seen that even at the time of change in temperature, the controller perfectly tracks the reference peak power voltage with no undershoot and negligible overshoot of 0.0383 V. There is a rise time of 0.0019 s and settling time of 2.4 ms. The controller exhibits a better tracking of the reference voltage for extracting the maximum power from the PV panel. The variation in temperature changes the reference peak power voltage and thus power changes accordingly. The variation in power (generated and output) with respect to temperature variations are shown in Figure 18. The tracking is achieved in 1.65 ms with no oscillations/ripples and zero steady state error. The efficiency observed is again more than 95%. Output voltage and current of the converter are shown in Figure 19.

5.3. Comparison of ST-SMC with Synergetic and Sliding Mode Controllers under Changing Temperature and Irradiance

5.4. Comparison between Proposed and Other Nonlinear Controllers

In this subsection, comparison between the proposed nonlinear controllers and the recently proposed nonlinear controllers [25] has been made. The values of dynamic performance are listed in Table 4 where proposed nonlinear controllers are compared with respect to their rise time, settling time, overshoot, undershoot and steady state error under standard temperature of 25 °C and an irradiance of 1000 W/m.
In terms of rise time, it can be seen that both SMC and ST-SMC have same value of 2.00 ms which is better than all the listed controllers in [25]. The rise time of synergetic controller is very large (0.6 s) when compared with all the listed controllers. The settling time of ST-SMC is 2.4 ms while that of SMC is 2.5 ms. The settling time for synergetic controller is 1.4 s which shows the late convergence to reference voltage when compared to all other controllers. ST-SMC has the fastest rate of convergence when compared to all other controllers.
There is no overshoot in the response of backstepping (BS), while a very little overshoot of 0.0042 V is present in the response of synergetic controller. The overshoot of ST-SMC is 0.0415 V which is also negligible when compared to others. SMC has significant overshoot of 0.7789 V while all other controllers have larger overshoots present in them.
Further, almost all three controllers i.e., IBS, synergetic and ST-SMC have almost zero steady state error. The steady state error in case of SMC is 2.2596 V while all other controllers have significant steady state errors. Moreover chattering and oscillations are negligible in case of ST-SMC while the response of other nonlinear controllers shows oscillations.
In a nutshell, after comparison of all the proposed controllers from the simulations under varying temperature and irradiance, it can be concluded that ST-SMC is the best choice for MPPT of PV array system using Buck-Boost DC-DC converter when it is required to track the reference voltage with no chattering even in the presence of disturbance which is changing environmental conditions in our case.

Getting maximum power from a PV system with negligible loss under changing environmental conditions is an on-going challenge. In this paper ST-SMC is designed, which not only resolves the problem of chattering but also enhances the overall dynamic response of the system. Artificial neural networks, which are trained using the data sets obtained from the characteristic curves of a PV array, are used to generate peak power voltage as a reference by taking temperature and irradiance as an input. The reference generated by ANN is then tracked by nonlinear controller using Buck-Boost DC-DC converter. Along with ST-SMC, synergetic and sliding mode controllers are also presented to meet the control objectives and for comparison with ST-SMC. The overall performance of proposed nonlinear controllers is simulated under changing environmental conditions and the performance of ST-SMC is compared with the other proposed nonlinear controllers given in literature. It is established that ST-SMC shows the overall better dynamic response while meeting all the control objectives with negligible chattering and oscillations. Global asymptotic stability of a system is ensured using Lyapunov stability criterion.
In the future, this work can be extended by further enhancing the accuracy of reference generation using different deep learning based algorithms and their combination with other artificial intelligence based techniques for efficient MPPT of PV systems.

Conceptualization and investigation, S.A.; writing, original draft, H.M.M.A.; supervision and project administration, I.A.; writing, review and editing, M.K.A. and Z.e.H.; visualization, S.A.K. All authors have read and agreed to the published version of the manuscript. 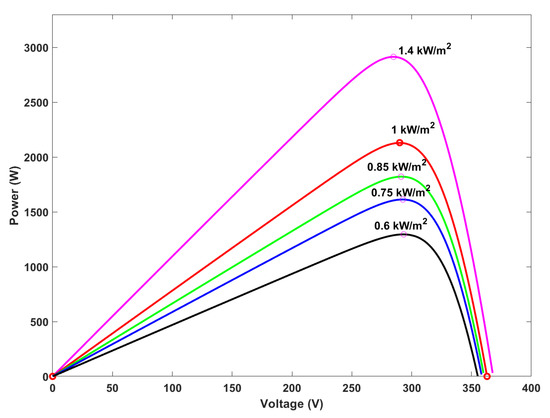 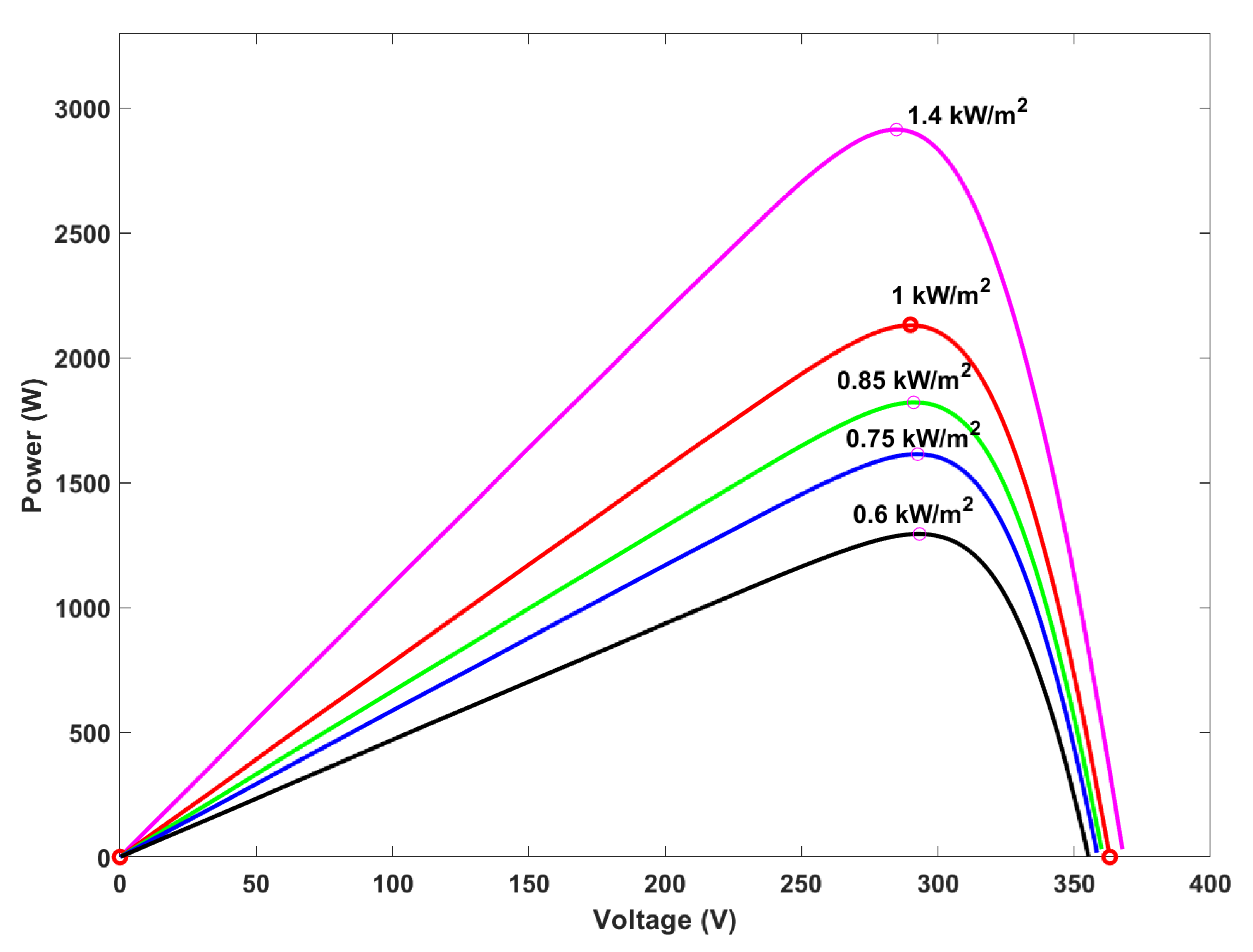 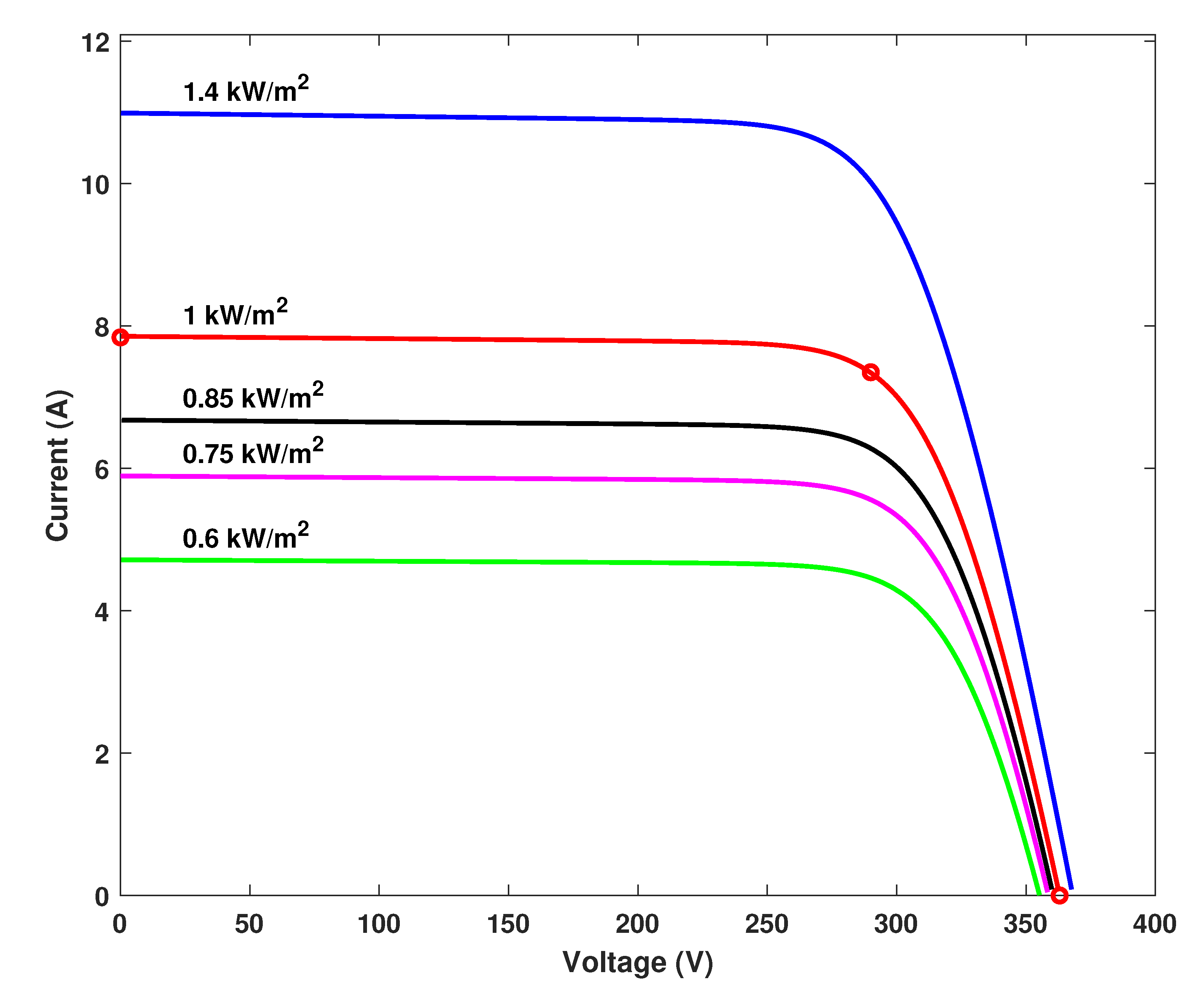 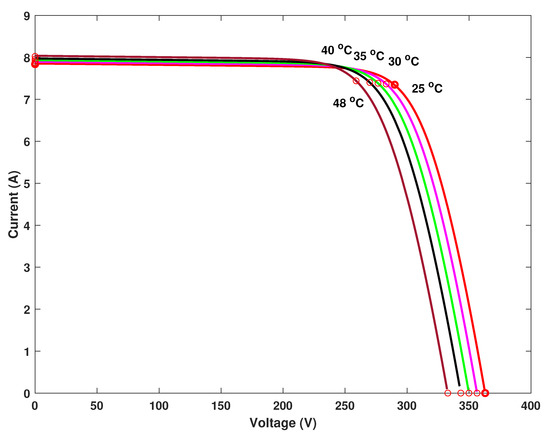 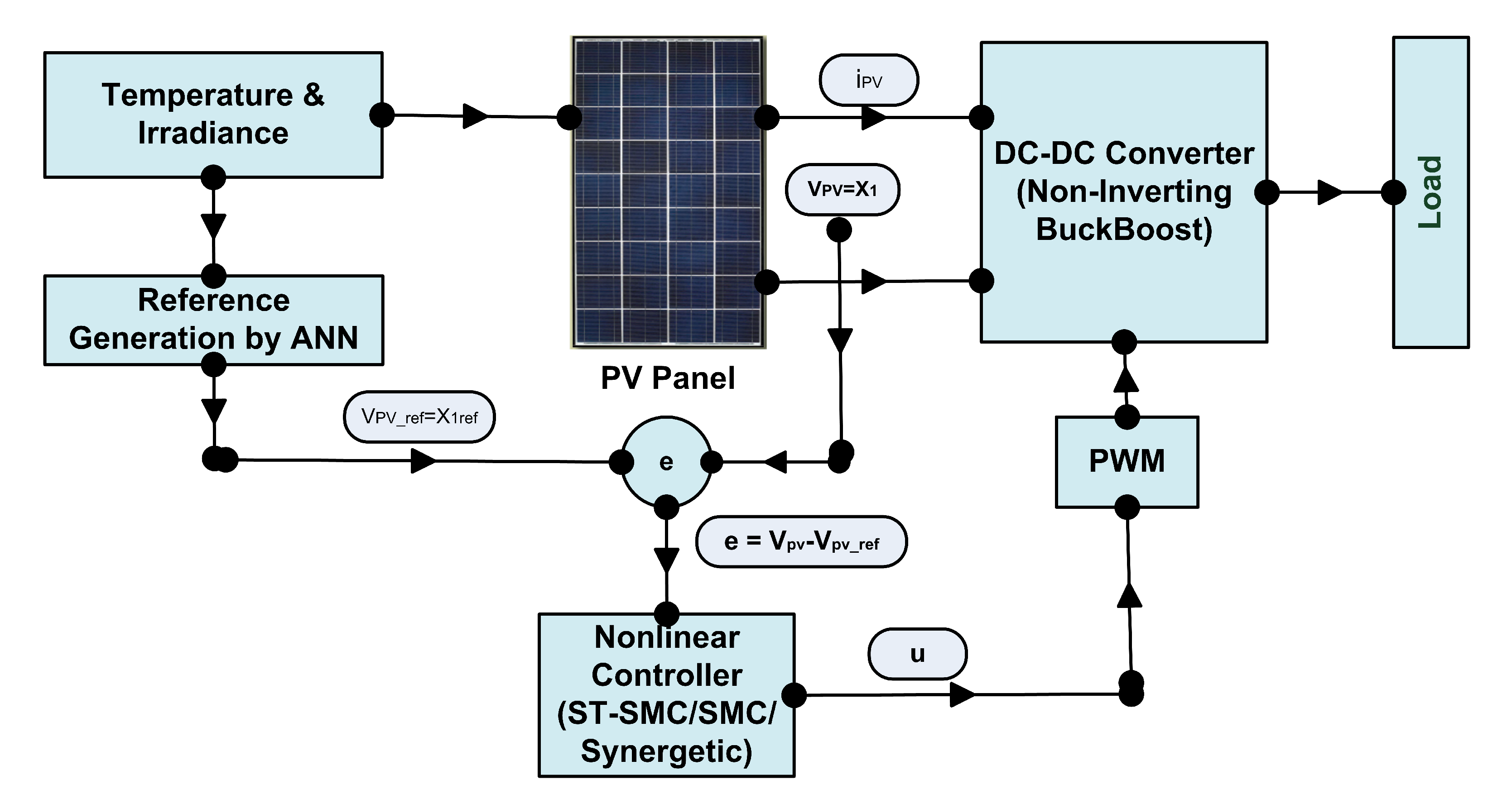 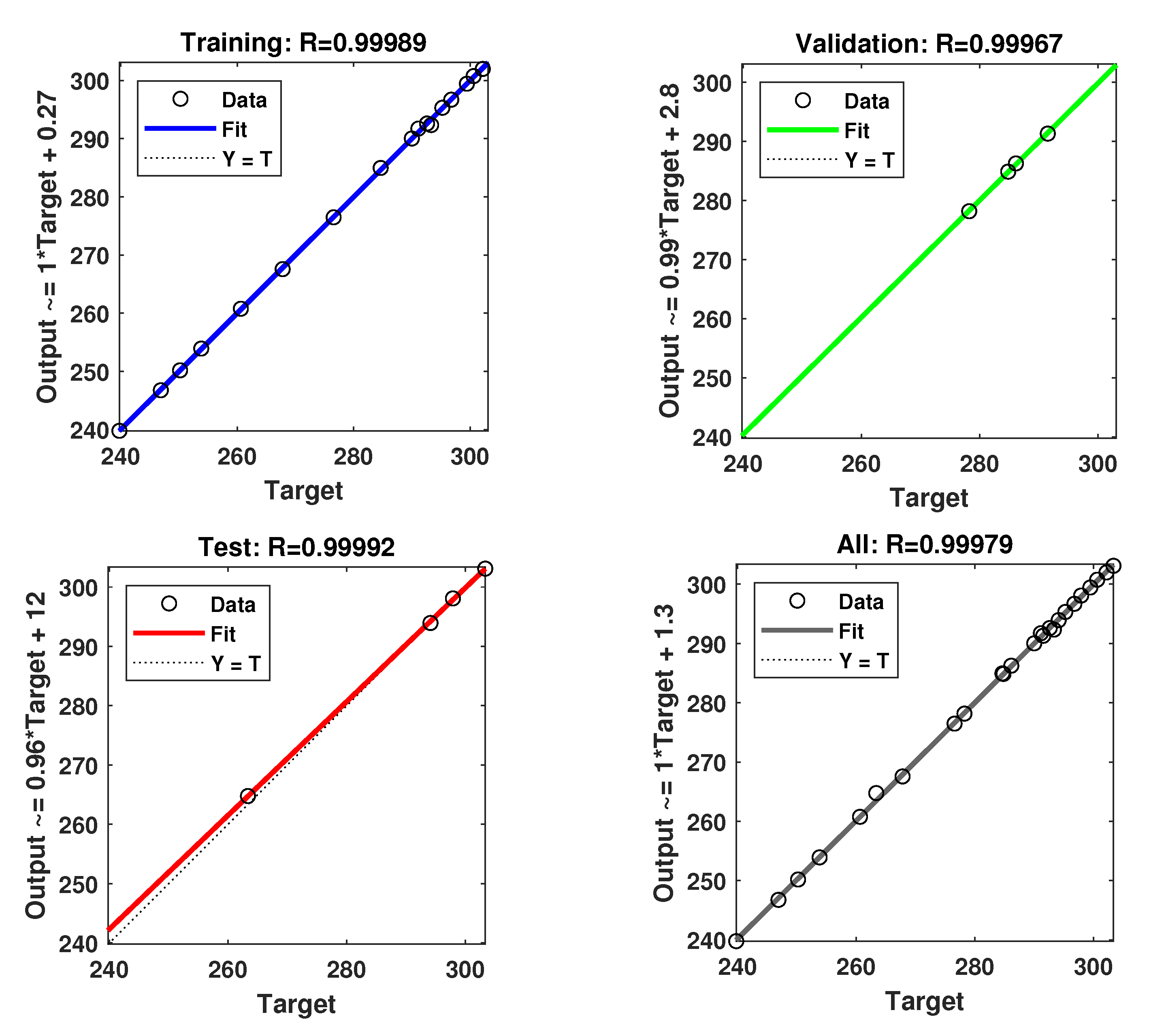 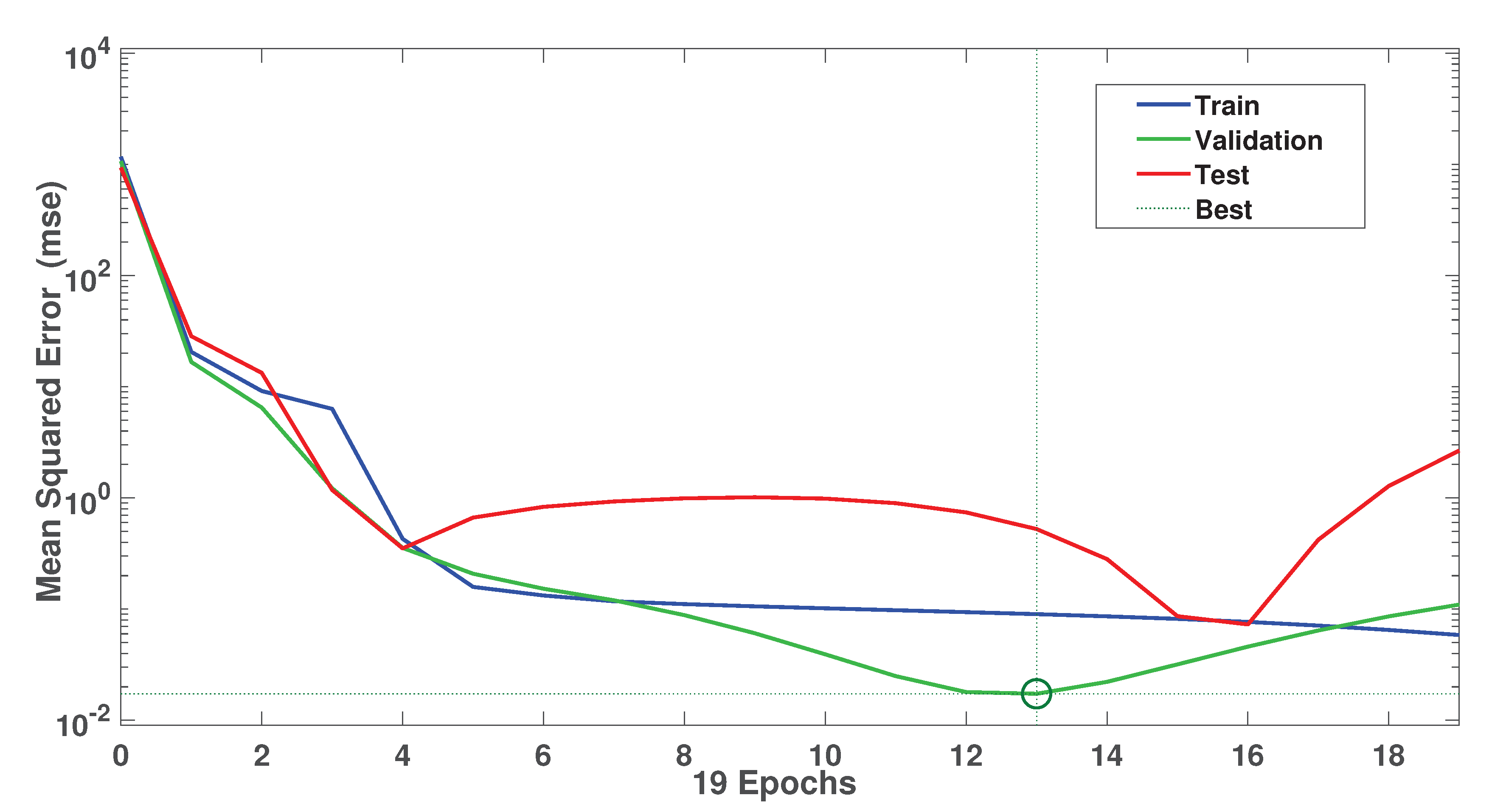 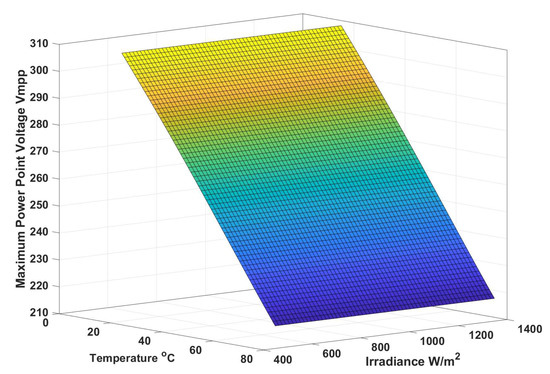 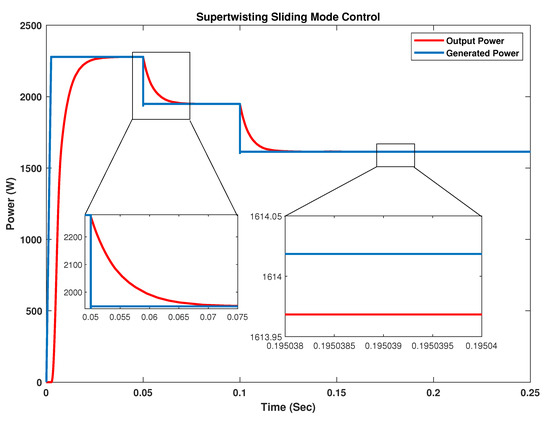 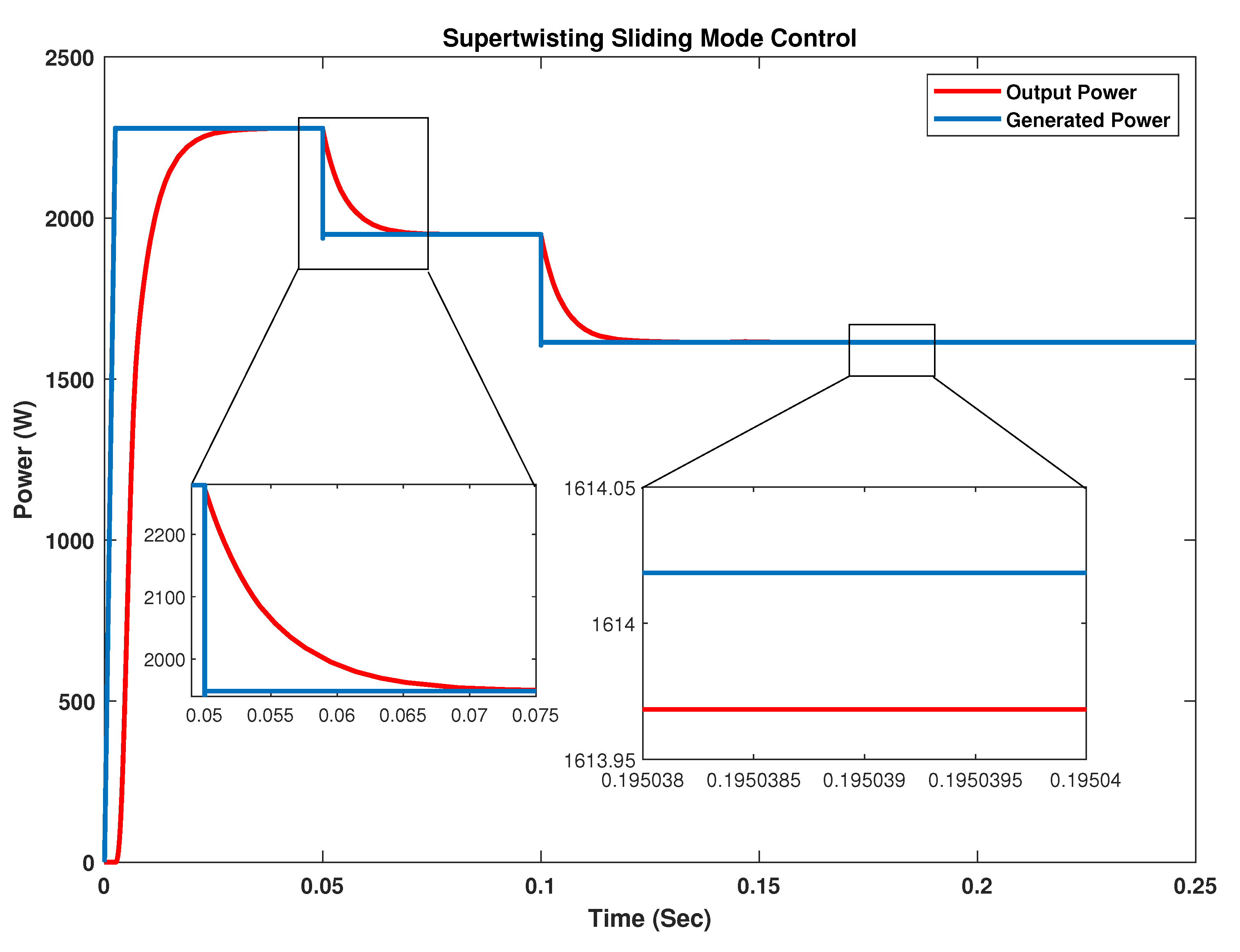 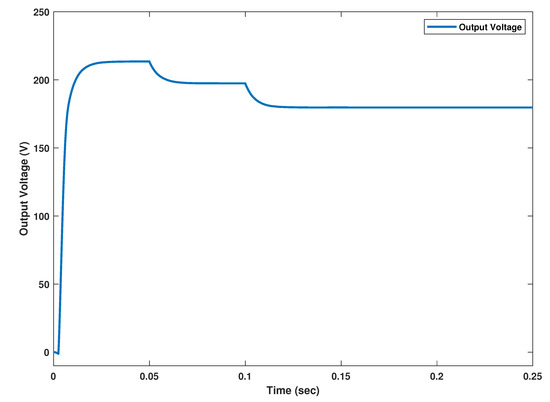 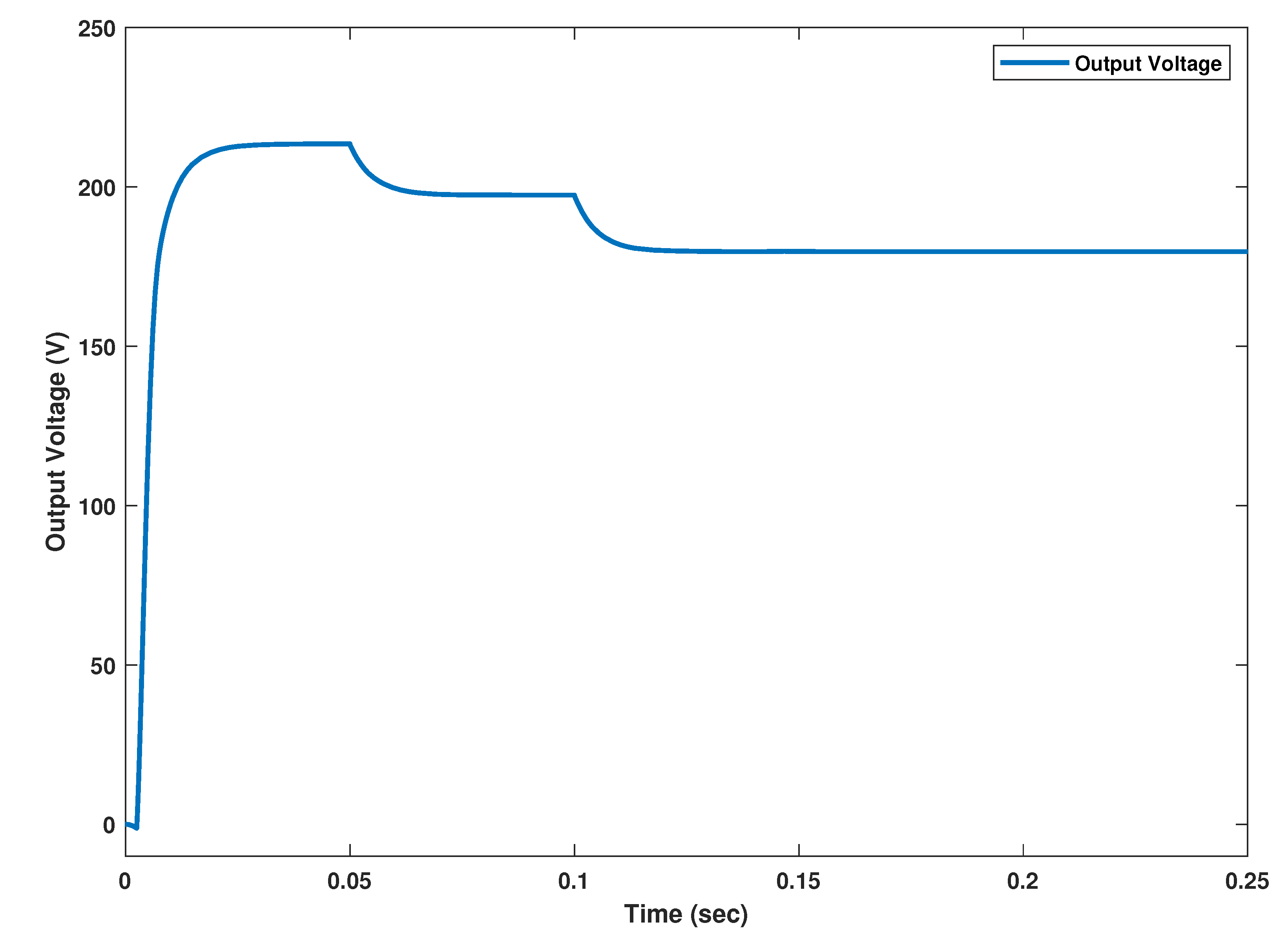 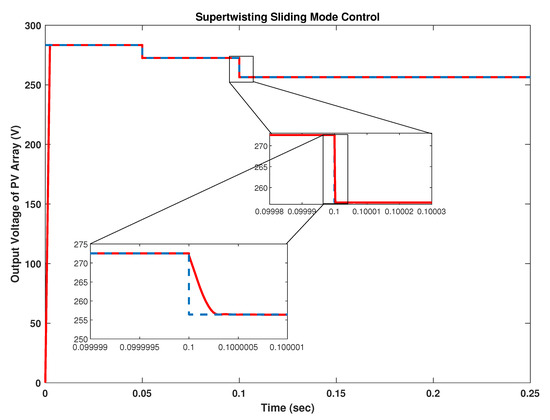 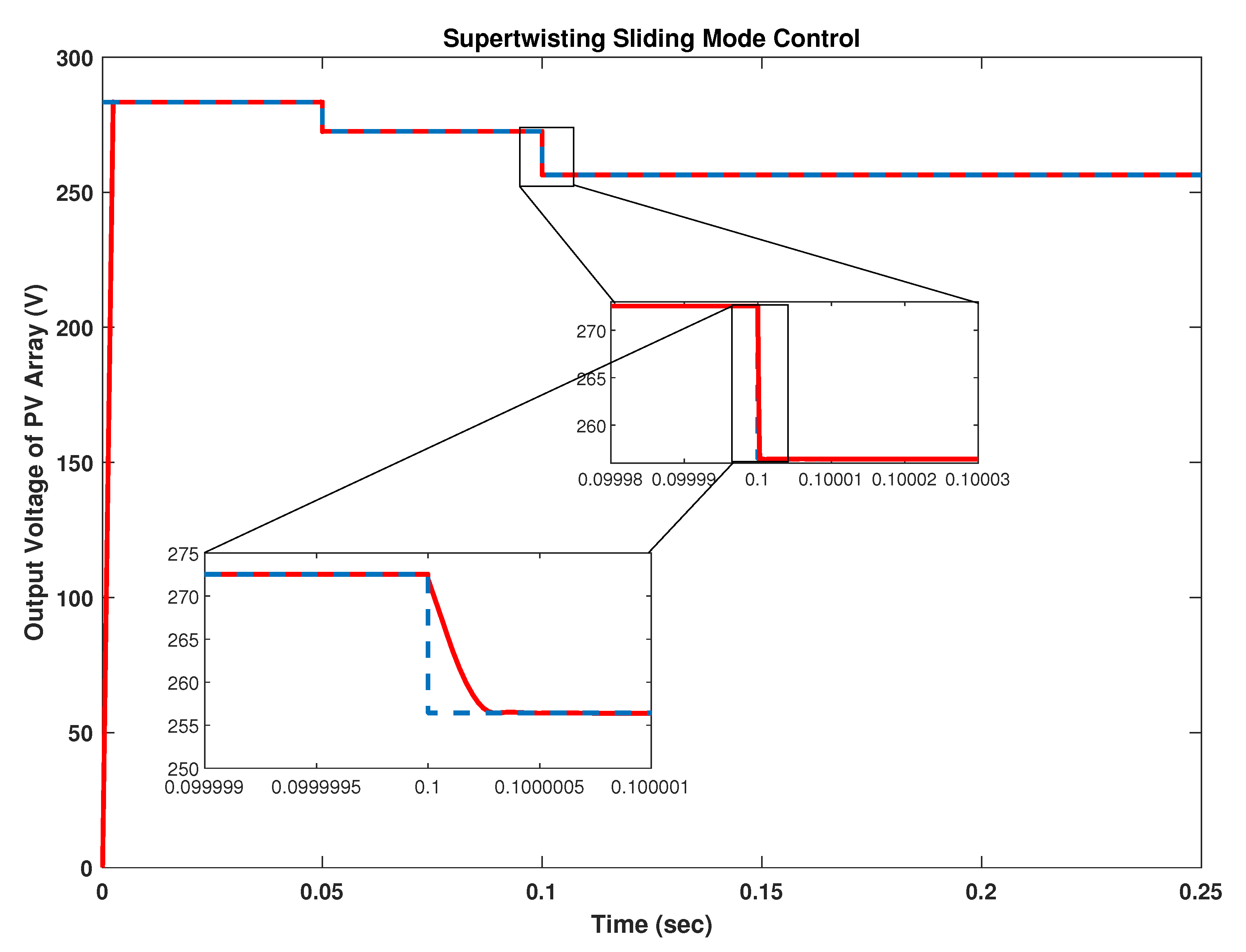 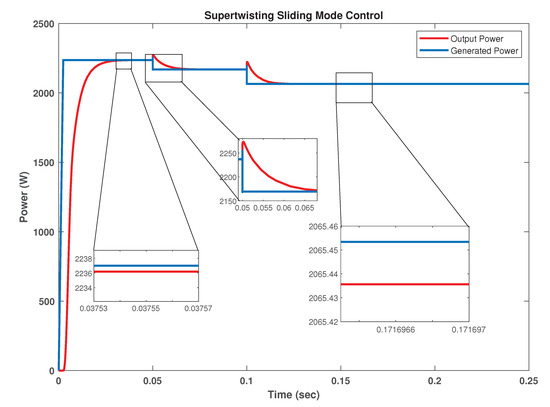 Table 4. Comparison of controllers.
Table 4. Comparison of controllers.
© 2020 by the authors. Licensee MDPI, Basel, Switzerland. This article is an open access article distributed under the terms and conditions of the Creative Commons Attribution (CC BY) license (http://creativecommons.org/licenses/by/4.0/).
We use cookies on our website to ensure you get the best experience. Read more about our cookies here.
Accept
We have just recently launched a new version of our website. Help us to further improve by taking part in this short 5 minute survey here. here.
Never show this again