What Attributes Do Passengers Value in Electrified Buses?
Previous Article in Journal

The differential drive assist steering (DDAS) system makes full use of the advantages of independent control of wheel torque of electric vehicle driven by front in-wheel motors to achieve steering assistance and reduce the steering effort of the driver, as the electric power steering (EPS) system does. However, as an indirect steering assist technology that applies steering system assistance via differential drive, its linear control algorithm, like existing proportion integration differentiation (PID) controllers, cannot take the nonlinear characteristics of the tires’ dynamics into account which results in poor performance in road feeling and tracking accuracy. This paper introduces an active disturbance rejection control (ADRC) method into the control issue of the DDAS. First, the third-order ADRC controller of the DDAS is designed, and the simulated annealing algorithm is used to optimize the parameters of ADRC controller offline considering that the parameters of ADRC controller are too many and the parameter tuning is complex. Finally, the 11-DOF model of the electric vehicle driven by in-wheel motors is built, and the standard working conditions are selected for simulation and experimental verification. The results show that the ADRC controller designed in this paper can not only obviously reduce the steering wheel effort of the driver like PID controller, but also have better nonlinear control performance in tracking accuracy and smooth road feeling of the driver than the traditional PID controller.
Keywords: independent-wheel drive; steering assistance; nonlinear system; active disturbance rejection control; smooth road feeling independent-wheel drive; steering assistance; nonlinear system; active disturbance rejection control; smooth road feeling

Figure 3 shows the overall framework of the independent-wheel-drive electric vehicle model, which is composed of a vehicle body model, mechanical steering system model, DDAS controller model, wheel rotation dynamics model, tire model and in-wheel-motor model, etc. The specific modelling processes of the core parts are shown in the following subsections, the DDAS controller model is introduced in Section 3, and for the others readers may refer to [1,10]. The descriptions of all the symbols of the variables can be found in the nomenclature section.

The tire model is an important part of the vehicle dynamic model. This paper selects the magic formula tire model which is widely used in the study of handling dynamics. The specific definition and parameters of the model are detailed in the literature [17].

3.2. Design of the ADRC Controller of DDAS System

Compared with the PID controller, though the ADRC controller has the advantages of better robustness, simple structure and easy implementation without knowing the accurate mathematical model of the controlled system, it also has the disadvantages of needing more control parameters and complicated parameter tuning [26], which severely limits its further industrial application. At the same time, these parameters have a great impact on the performance of the controller, so appropriate method selection to set the values of each parameter has to be done first.
According to the theory of ADRC, some of the parameters are determined empirically, and once these parameters are determined, no correction is needed. For example, , , , and , , , are the parameters of the nonlinear function fal, which affect the change trend of the nonlinear function, but they usually do not change with the change of the controlled system. Therefore, the ranges of and in the nonlinear state error feedback are generally , , so in this paper, and are chosen as fixed values, 0.95 and 1.25, respectively, and in the third-order extended state observer are chosen as fixed values, 0.5 and 0.25, respectively. The values of , , and have a great influence on the nonlinearity of the controller. After multiple simulations, the value of , , and are chosen as 0.01 which is ten times of the sampling step. The value of speed factor R in this paper is 10.
In summary, in addition to the empirically determined parameters, the other parameters which need to be specifically set are the following six parameters , , , , and . Generally, there is no relationship between the six parameters , , , , , and the parameters , , , , , , , mentioned above. At the same time, , and in the extended state observer are mainly related to sampling step size [23], which can be designed separately. In addition, and in nonlinear state error feedback are also important parameters of the controller and is an important parameter to characterize the difference of different systems. Due to the fact that there is a certain mutual influence between these parameters, and manual adjustment is too complicated, offline optimization to set the values of these six parameters is implemented. In this optimization process, three parameters , , are optimized first, and then the rest three parameters are optimized.
There are many existing optimization algorithms, such as genetic algorithm, simulated annealing algorithm and particle swarm optimization, etc. Among them, the simulated annealing algorithm has the advantages of simple description, flexible use, high operational efficiency and less constraint on initial conditions [27]. Therefore, the simulated annealing algorithm is chosen as the optimization algorithm.
In order to implement the optimization, the objective function of the optimization problem according to the needs of this paper should be determined first. The target of this paper is to design a better DDAS controller, which is to control the actual steering wheel torque to follow the ideal steering wheel torque in real time by controlling the front wheels driving torque difference. Therefore, the objective function is defined as follows:
In order to speed up the optimization process, the initial values of each parameter are determined at first by multiple simulations as shown in Table 1. Then the relevant optimization program is coded in MatLab software, in which the sim function is used to call the simulation model. The simulation condition selects the sinusoidal steering angle input at 30 km/h vehicle speed, and the road surface adhesion coefficient is high adhesion, which is 0.8. As an example, the iterative optimization process of the three parameters , and in extended state observer is shown in Figure 10.
As shown in Figure 10, after around 870 generations, the fitness function basically reaches the optimal value. The final six optimized parameters are shown in Table 1 below:

Taking the need for more facilities, time requirements and test yard support into account as well as the risk of losing stability while carrying out the double-lane-change test in actual vehicle experiments, a hardware-in-the-loop simulation experiment is selected to replace real vehicle testing and validate the control effect of the DDAS control strategy proposed in this paper. The testing platform of the driving simulator as shown in Figure 13 is composed of a host computer, G29 driving simulator with steering wheel angle/torque sensor and dSPACE 1103 hardware running the vehicle model.
The driver-in-the-loop experiment selects a double-lane-change test case, with a target constant-speed 40 km/h and a uniform road adhesion coefficient 0.85. The experimental results are shown in Figure 14.
It can be seen from Figure 14a that the steering wheel angle input of the drivers in three experimental cases with different controller of DDAS system or without any power steering control are similar. Figure 14b shows that DDAS has achieved very good power steering assistance effect using both the PID controller and the ADRC controller. The peak value of the steering wheel torque is reduced from 7 Nm in the case of having no any power steering to 4 Nm in the case of having the DDAS system, a reduction rate of about 43%, and the assistance effect is obvious. Moreover, when the ADRC controller is used, the steering wheel torque fluctuation is much smaller and smoother. The disturbance estimation compensator of the ADRC controller provides a compensation function for the possible disturbance from inside or outside of the steering system, thereby effectively improving the control effect of the differential drive assist steering system. The comparison result indicates that the ADRC controller is more robust when facing possible steering wheel torque or angular sensor noise, thus achieving a better road feeling for the driver than the PID controller. As shown in Figure 14d, when DDAS is applied, it is interesting that the yaw rate of the vehicle is increased, but the steering wheel angle input of the driver in this process also increases.

In this paper, a DDAS control strategy based on the steering-wheel-torque direct control is developed for the first time. Considering the disadvantages of the traditional PID controller and the particularities of the DDAS system, the ADRC technology is introduced to design the DDAS controller to reduce the steering effort of the driver and improve the driver’s road feeling simultaneously. As for the problem that the parameters of the ADRC controller are difficult to set, the simulated annealing algorithm is used to optimize the controller parameters offline. Finally, a variety of working conditions are selected to verify the developed strategy by using the vehicle model established in this paper. All the simulation and experiment results show that compared with the PID controller commonly used in DDAS, the proposed ADRC controller developed in this paper can not only reduce the steering effort of the driver obviously like previous conventional control method, but also have better control performance in tracking accuracy and smooth road feeling of the driver.

J.W. administrated the whole research and revised the manuscript as the scientific project leader. X.W. implemented the experiments and wrote the initial manuscript. Z.L. designed the control algorithm model and performed the simulation. F.A. supervised the writing and critically reviewed. All authors have read and agreed to the published version of the manuscript.

This research was funded by the National Natural Science Foundation of China under Grant 51875235, and in part by the Jilin Province Science and Technology Development Project under Grant 20180414011GH and 20190802015ZG.

The authors are grateful to the National Natural Science Foundation of China and all the reviewers for their constructive comments. 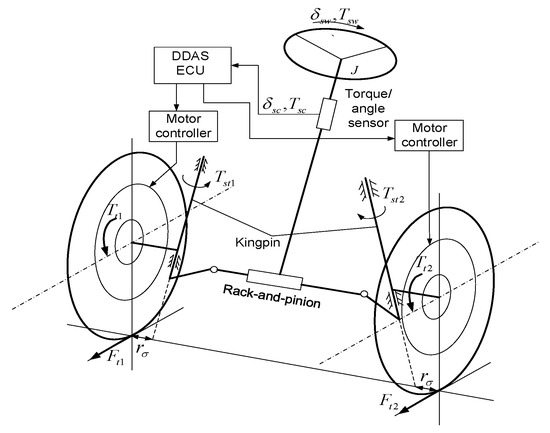 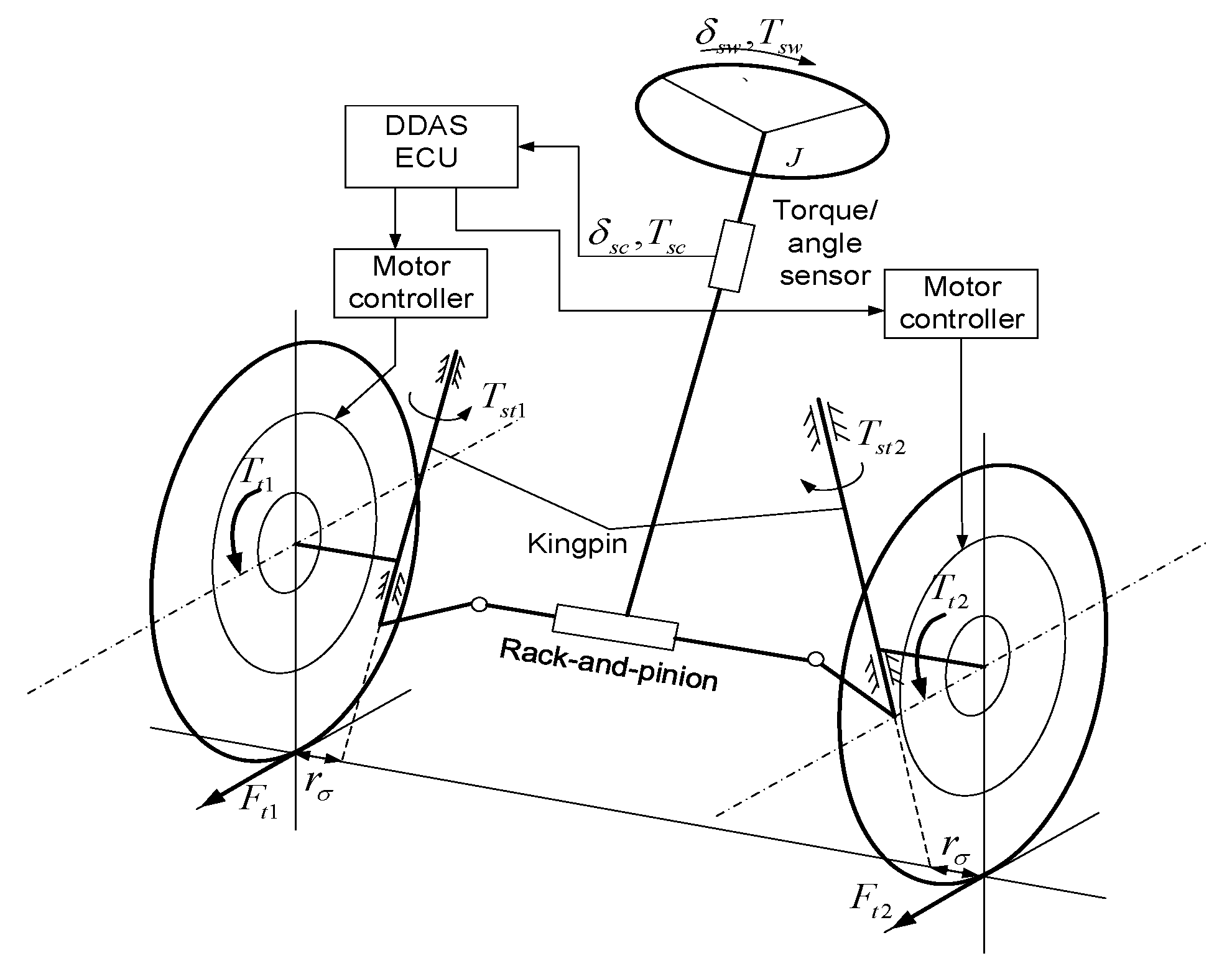 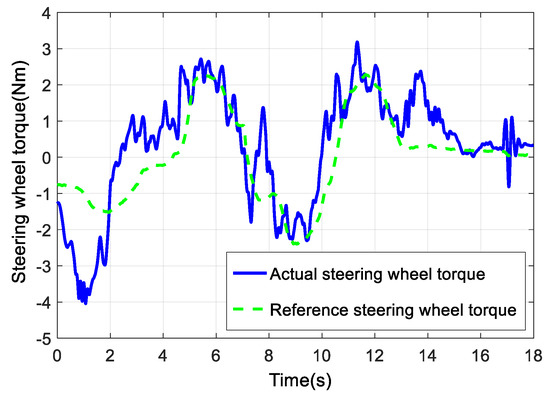 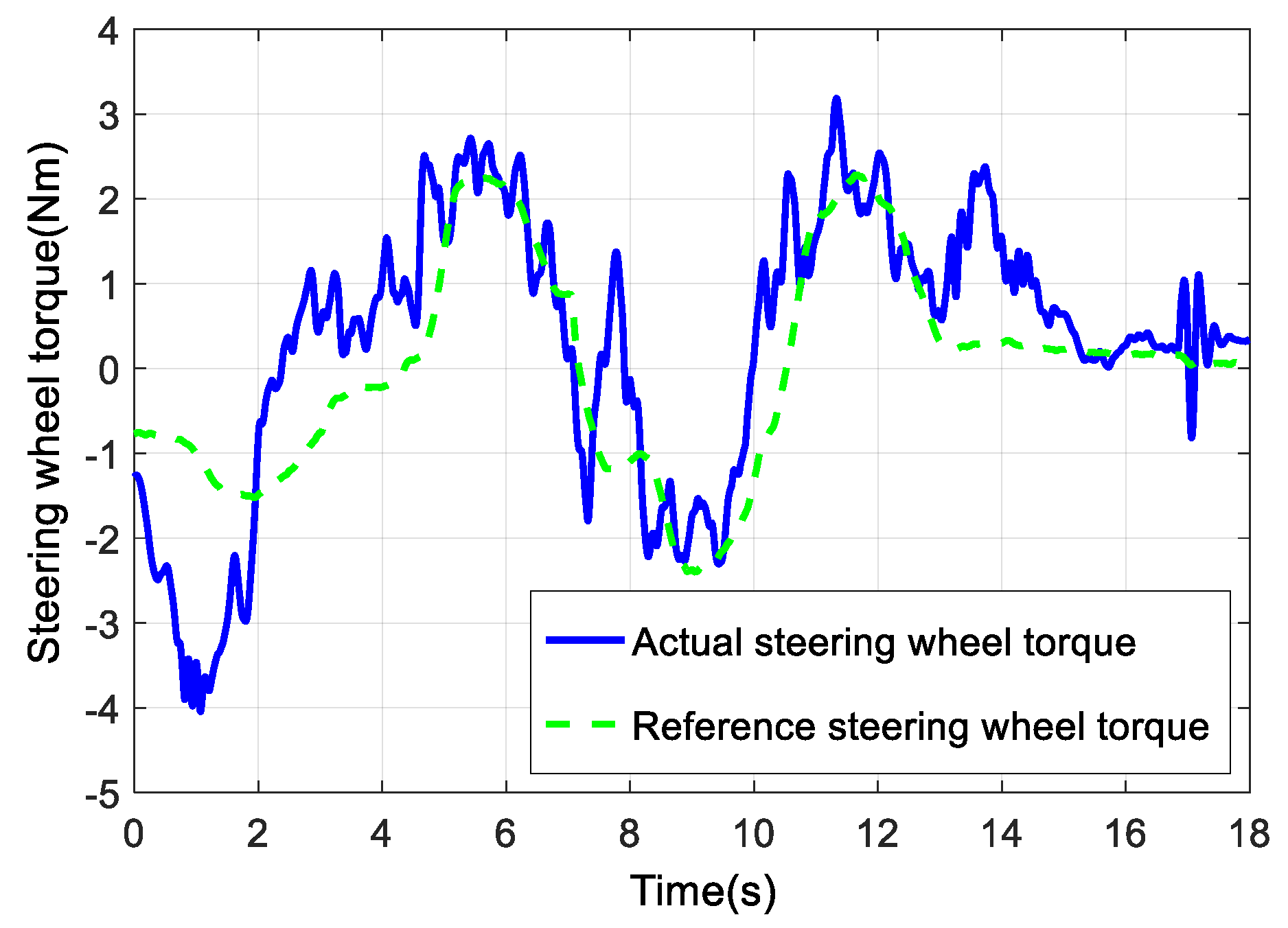 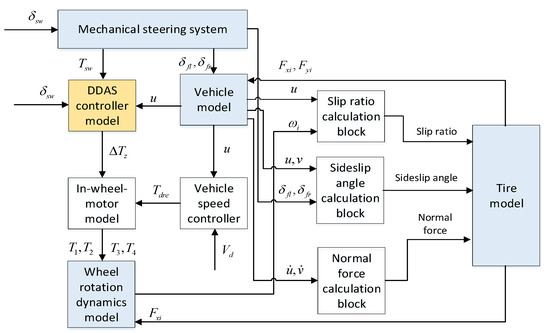 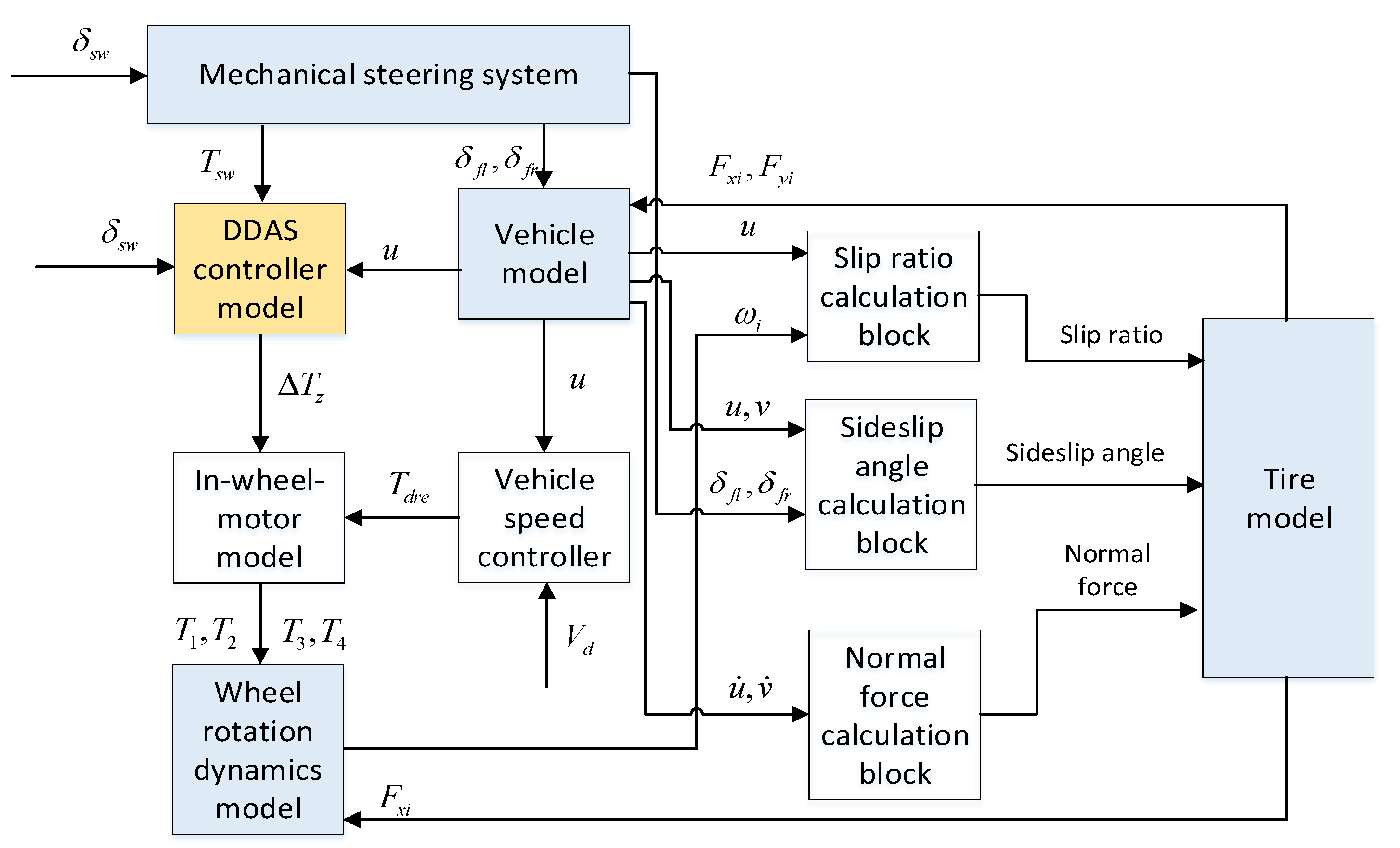 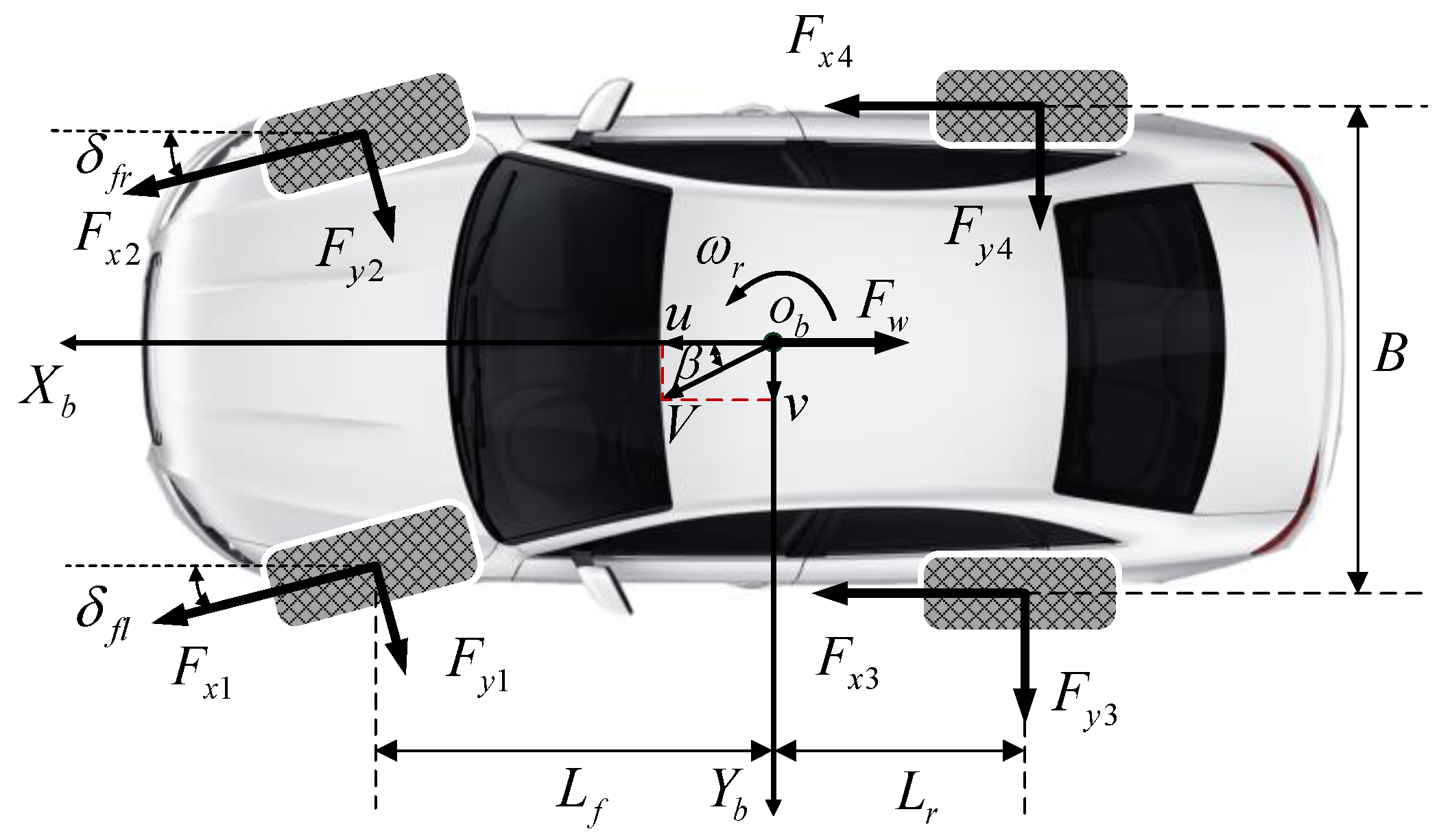 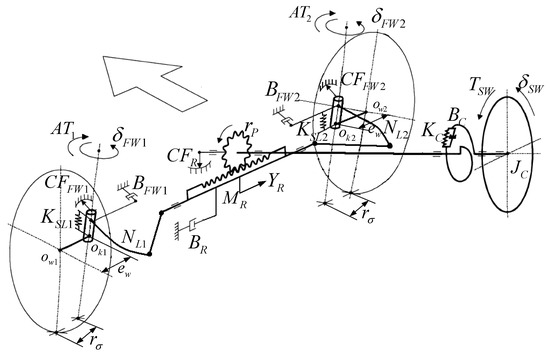 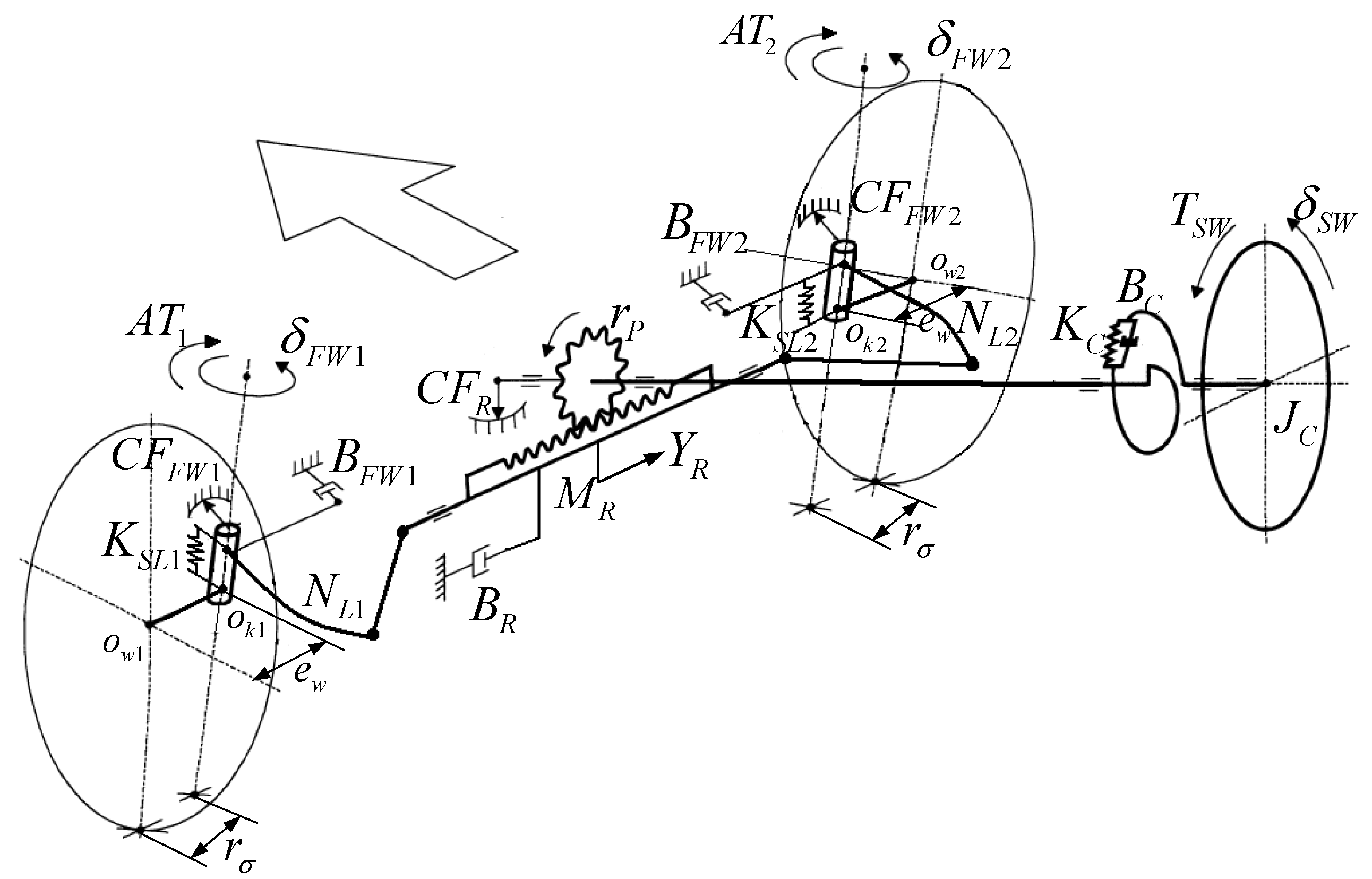 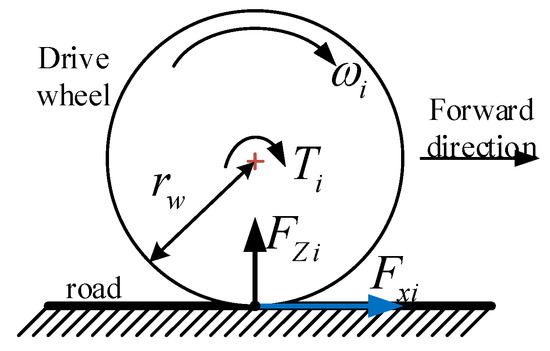 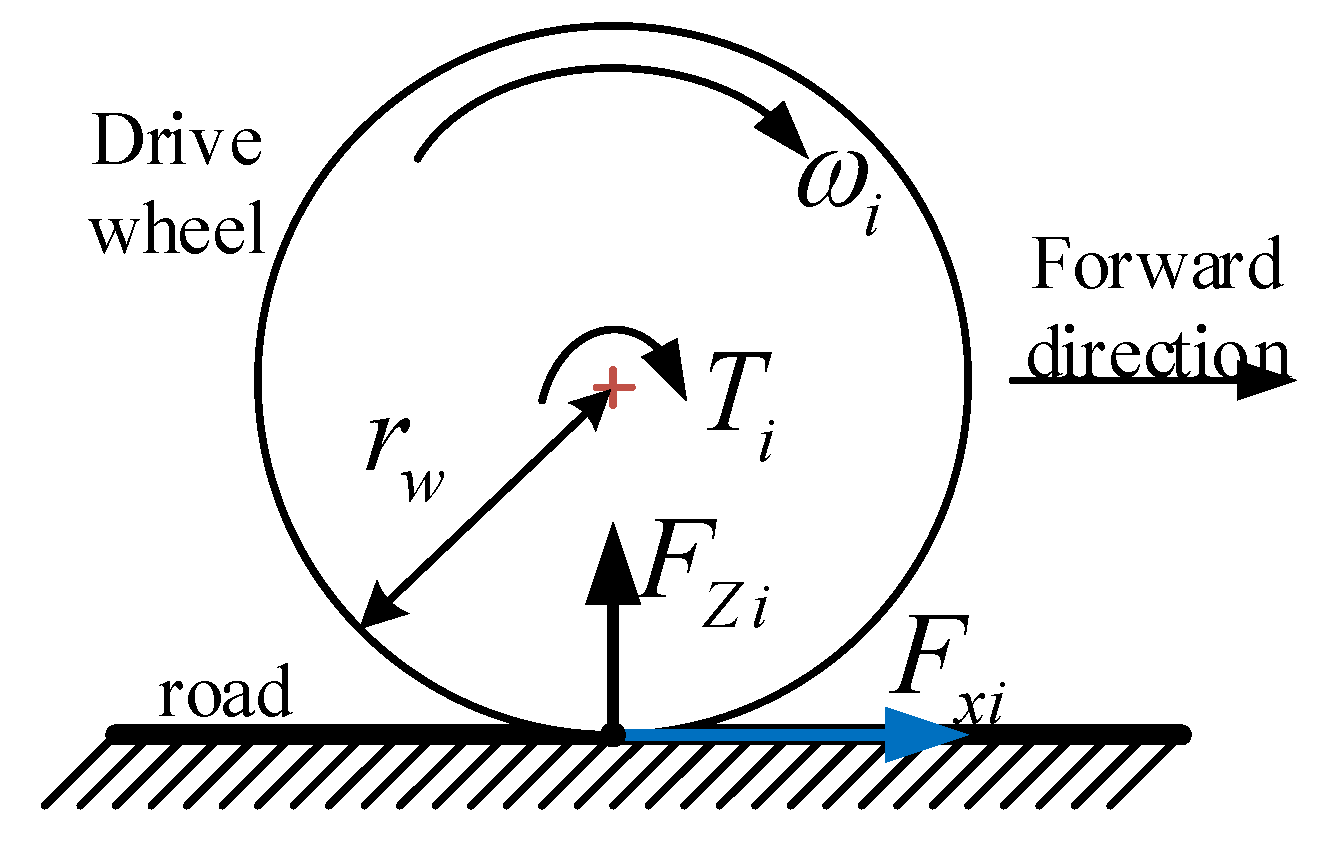 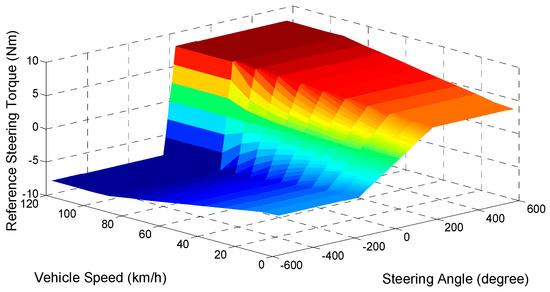 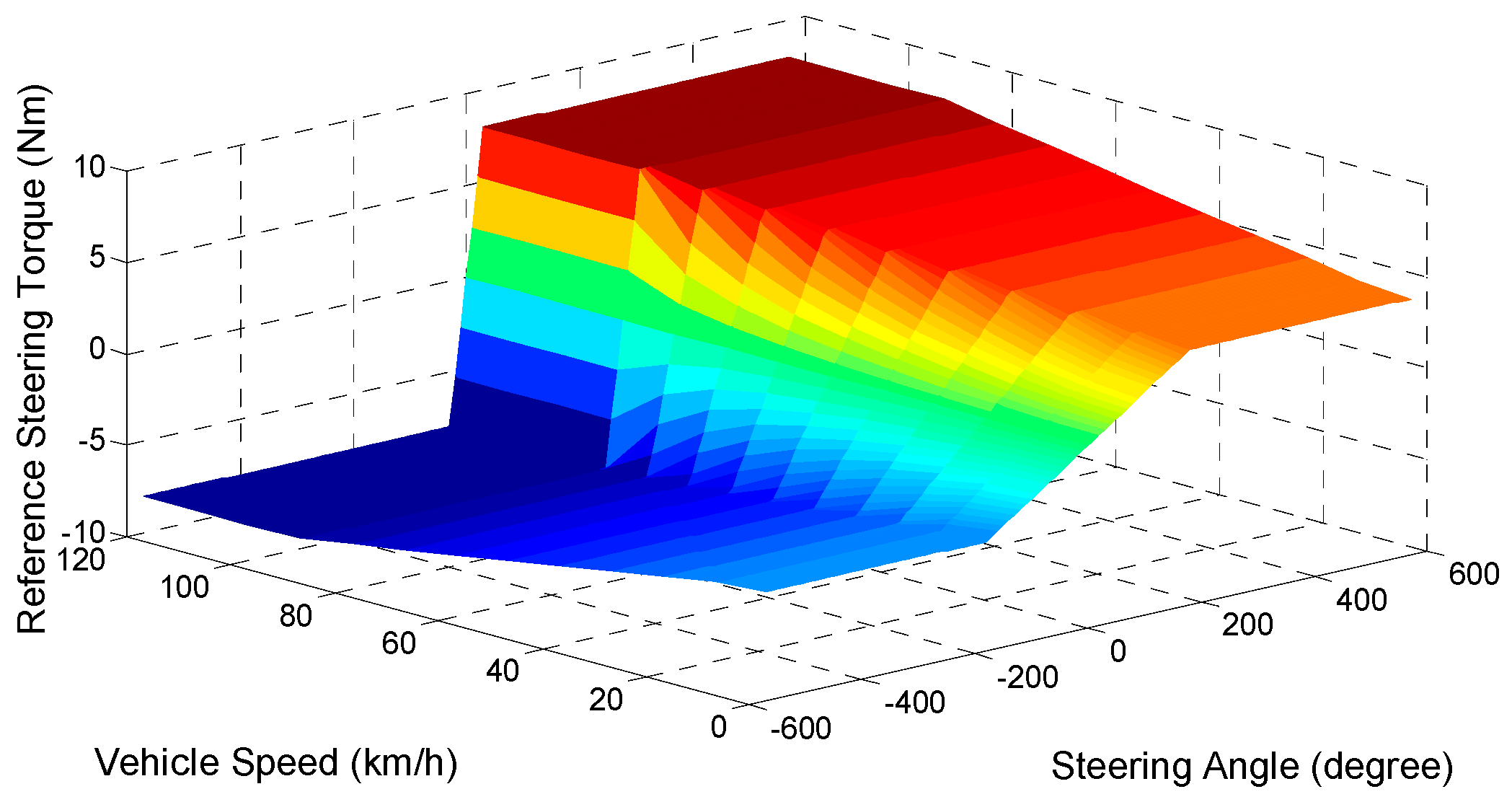 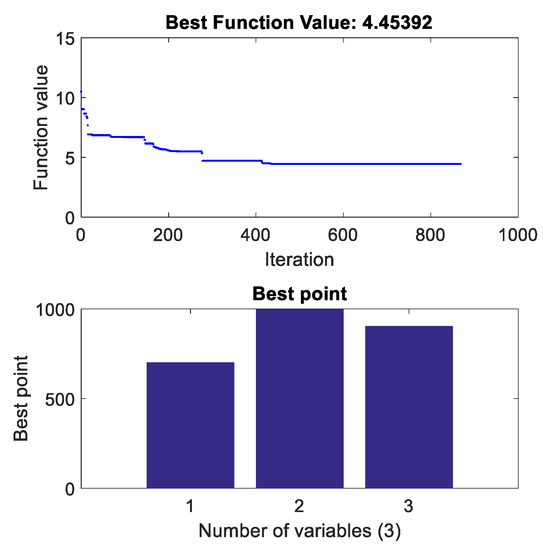 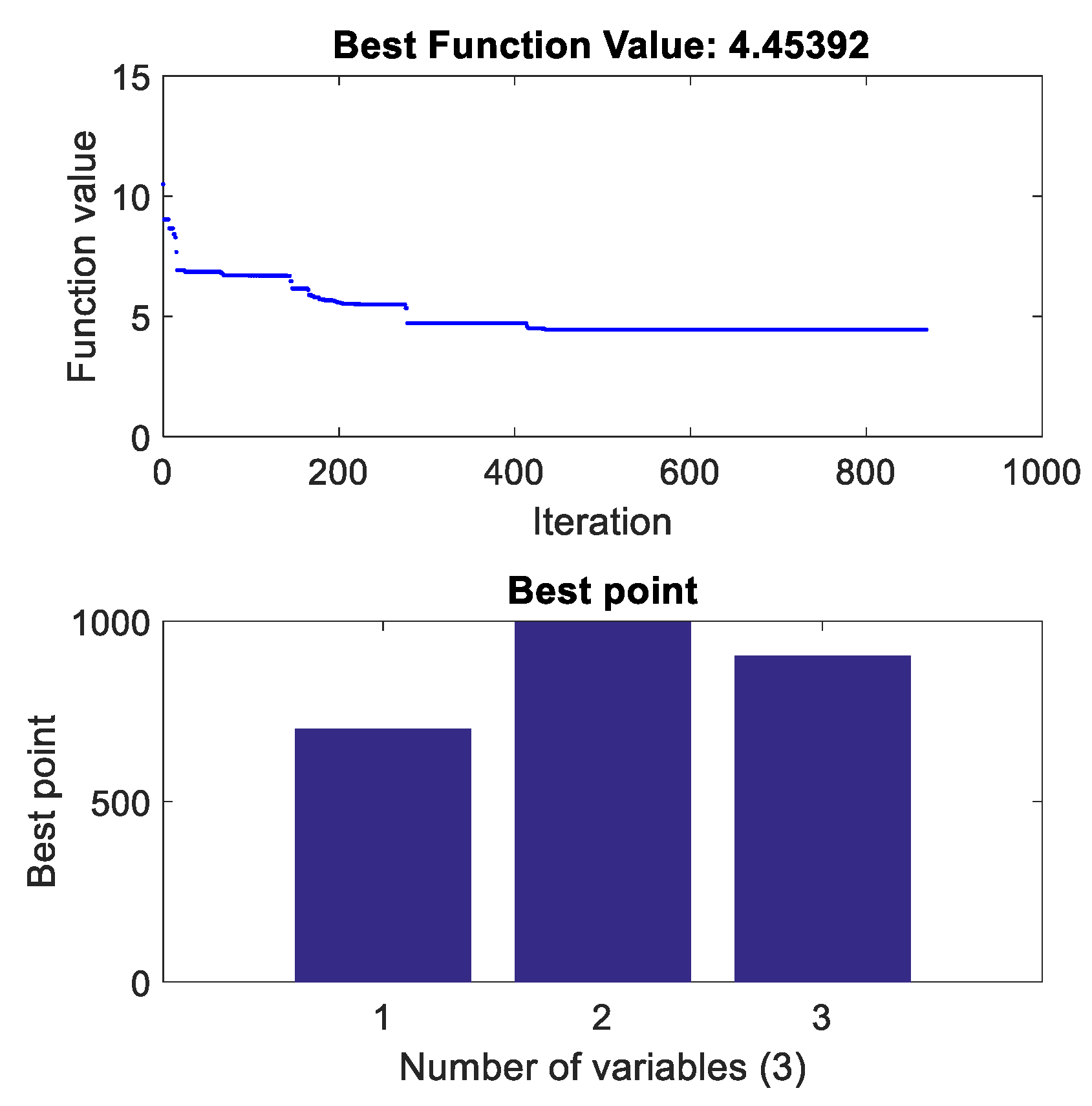 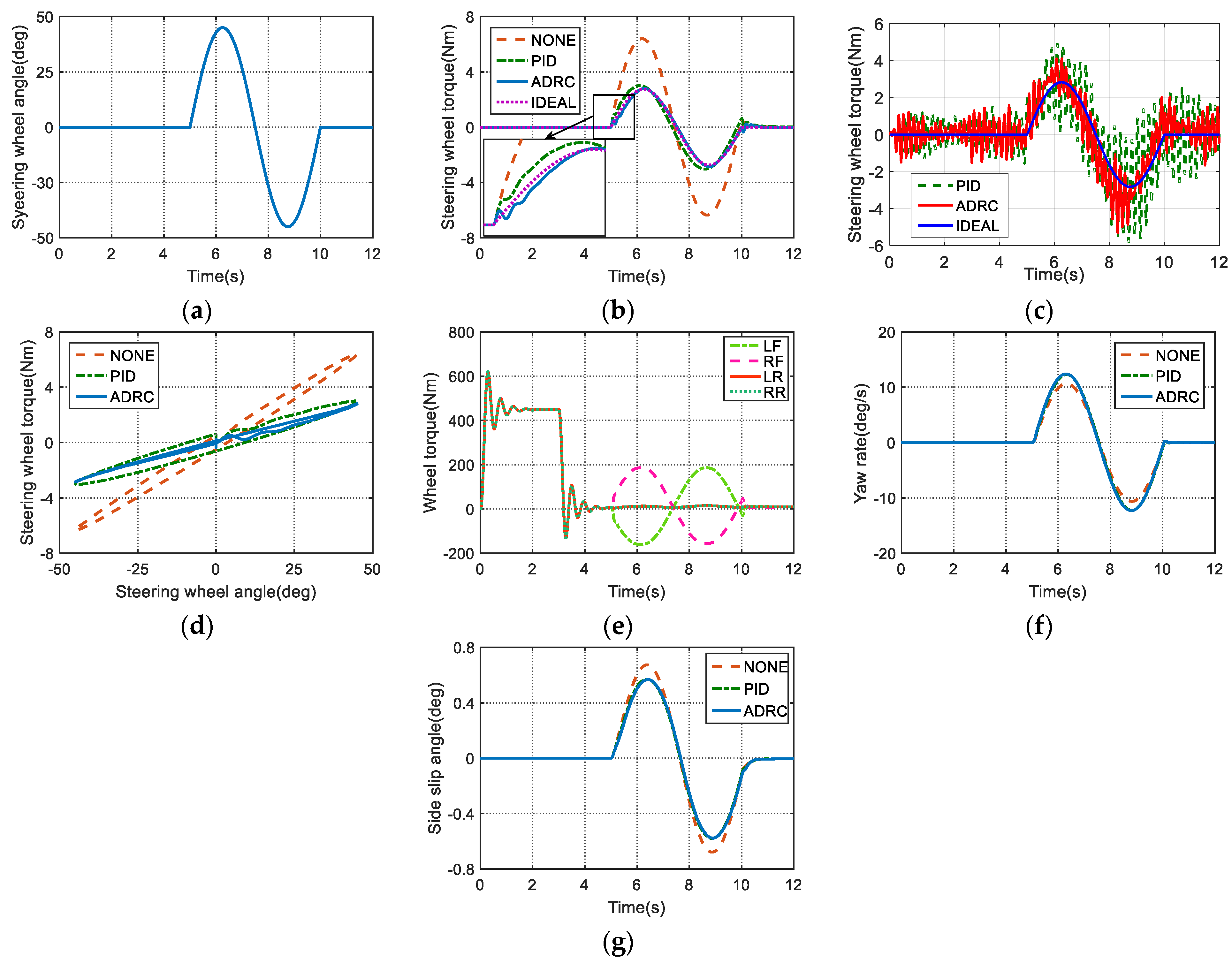 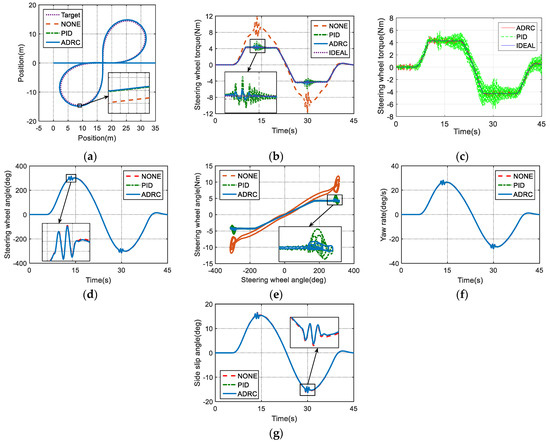 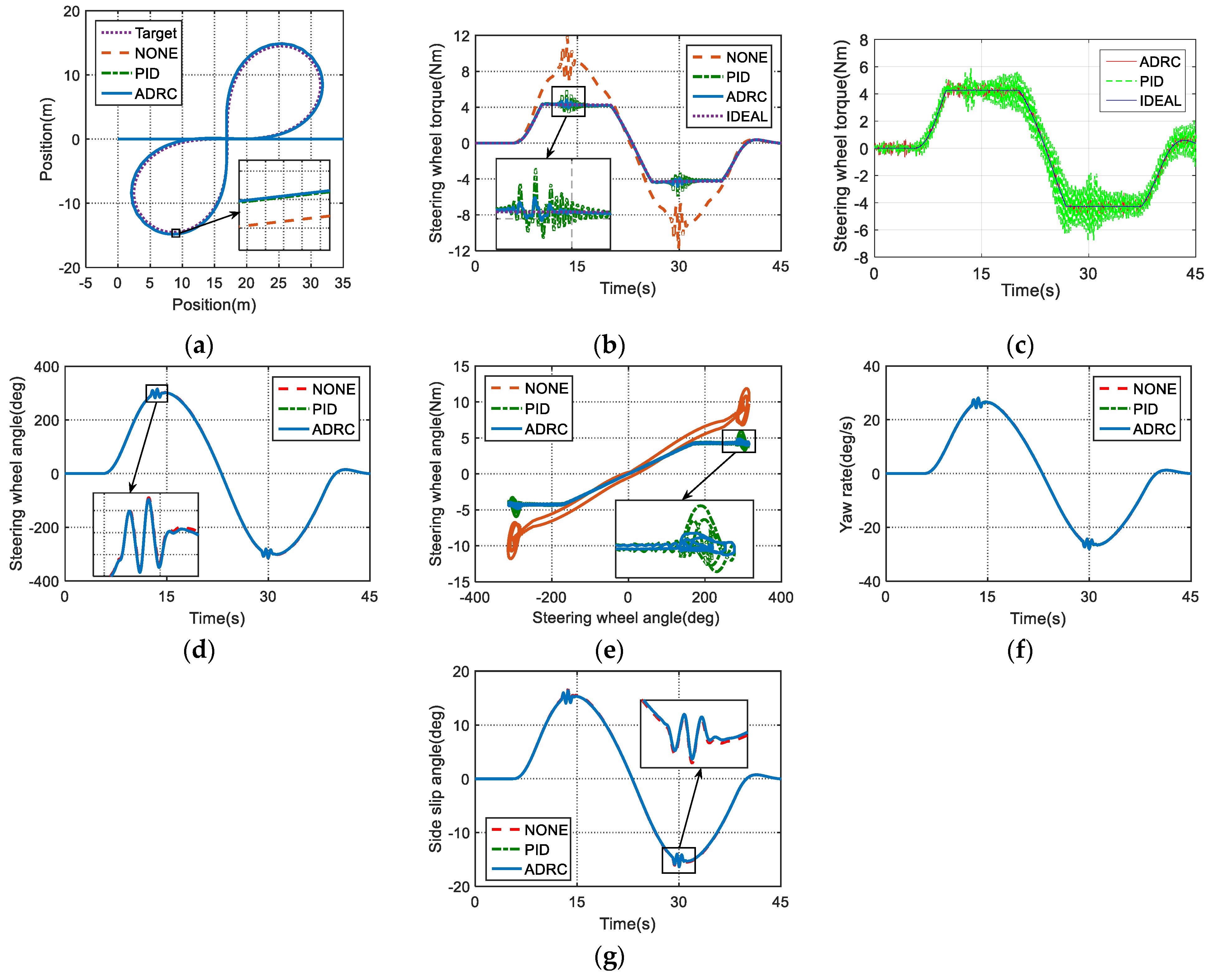 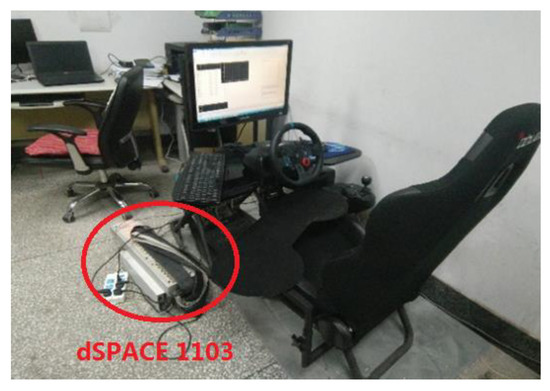 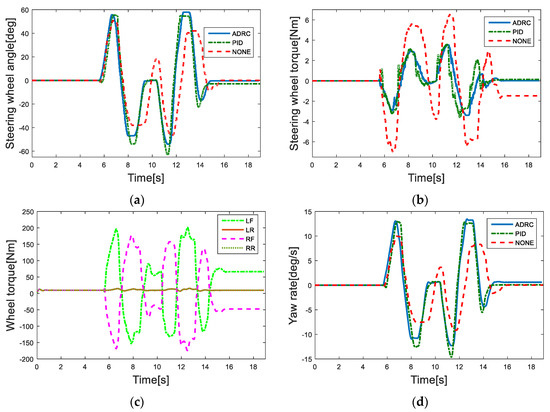 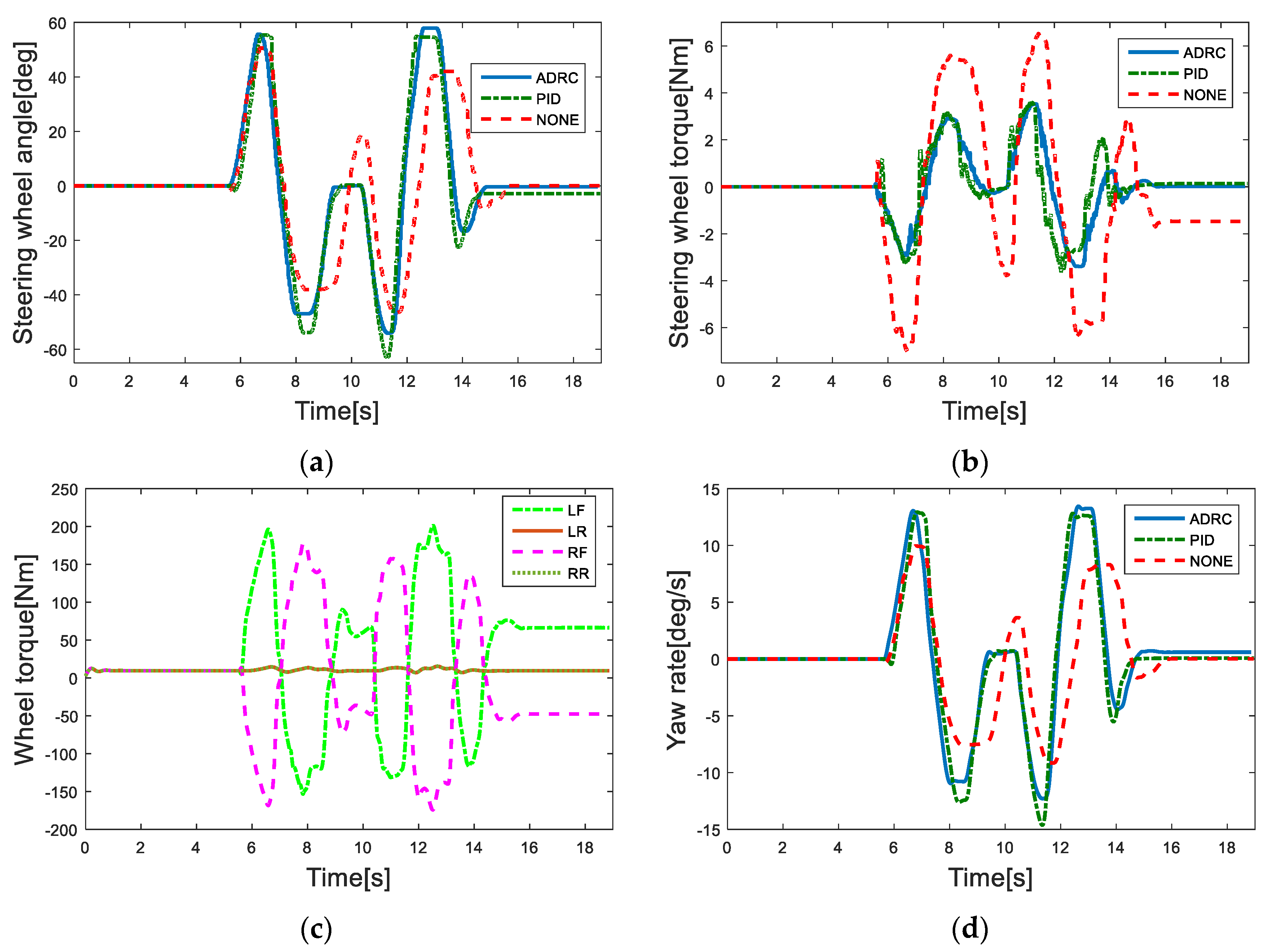