Contribution of Yeast Extract, Activated Carbon, and an Electrostatic Field to Interspecies Electron Transfer for the Bioelectrochemical Conversion of Coal to Methane

Microbial electrosynthesis (MES) systems can convert CO2 to acetate and other value-added chemicals using electricity as the reducing power. Several electrochemically active redox mediators can enhance interfacial electron transport between bacteria and the electrode in MES systems. In this study, different redox mediators, such as neutral red (NR), 2-hydroxy-1,4-naphthoquinone (HNQ), and hydroquinone (HQ), were compared to facilitate an MES-based CO2 reduction reaction on the cathode. The mediators, NR and HNQ, improved acetate production from CO2 (165 mM and 161 mM, respectively) compared to the control (without a mediator = 149 mM), whereas HQ showed lower acetate production (115 mM). On the other hand, when mediators were used, the electron and carbon recovery efficiency decreased because of the presence of bioelectrochemical reduction pathways other than acetate production. Cyclic voltammetry of an MES with such mediators revealed CO2 reduction to acetate on the cathode surface. These results suggest that the addition of mediators to MES can improve CO2 conversion to acetate with further optimization in an operating strategy of electrosynthesis processes. View Full-Text
Keywords: carbon dioxide; microbial electrosynthesis (MES); redox mediator; carbon and electron balance carbon dioxide; microbial electrosynthesis (MES); redox mediator; carbon and electron balance
►▼ Show Figures 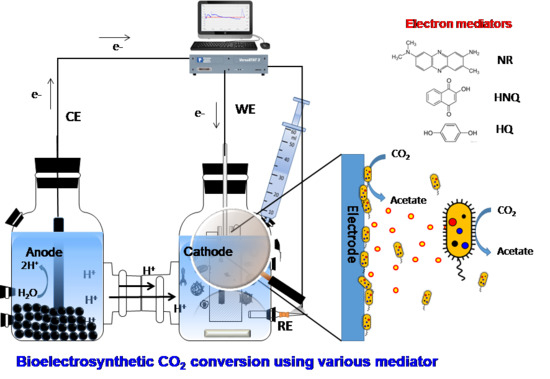